I'm officially getting old.  Day three of the punk festival.  I'd not seen many bands, stayed in the comfort of a Premier Inn, paced myself, and yet I was still feeling that 'final day of the fest' burn which you only used to get for camping out at Temple Newsam or Bramham Park for 4 nights.

Urmston seemed a nice simple way to begin the final day, with three GBG entries and just a short trek from Deansgate station.  Matthew Lawrenson would be joining me, motivated by the need to avoid an exciting sounding 'domestic situation' at home, as much as my wonderful company.

I was in Urmston first, on another scorcher of a morning, and was immediately struck by the wonderfully 'Lancs' feel of the town.  You know, lots of little independent shops, cafes and markets, and smiley folk with greasy hair and lice leaning against walls smoking, chatting and laughing with their gums flapping in the breeze.

It made sense, as ever, to start at the furthest one out and work my way back in.  This was actually called Flixton Conservative Club, and Flixton has its own station, but there is one in between called Chassen Road which is even closer.  Crazy times!  If I was a modern day Dr Beeching, I'd recommend to the more evil bloke merging these three into one, and opening two replacement ones in rural Cambs (Upware) and Cornwall (Manaccan) respectively.  Random I know.

Anyway, I soon saw this old building looming large and it really did have that sinister 'haunted old hospital' feel, though I didn't get a proper picture of it: 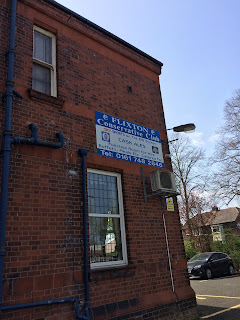 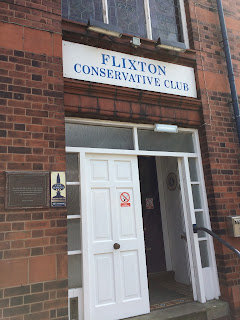 The outer door being open told me it was open, but it was one of those 'press the button' and wait for the 'door to be released'.  This place is CAMRA club of the year at present, so they weren't going to make it easy for any Tom, Dick or Twamra Harry to get in were they?  Didn't help that I spent five minutes pressing the wrong button because I can't read.  Soon, I was in and a lovely bloke (not the main 'steward') asked me to sign a guest book - not because I looked dodgy but because he was 'interested' to see which CAMRA branch I came from - or so he told claimed, but it was certainly giving me serious Cambridge Analytica vibes.  He then indicated a fine list of beers on the board, and predicting everyone today would drink Abbeydale Moonshine, I disappointed him by ordering something Pictish which he seemed impressed with.  Next he showed me the huge snooker room, this is where the old hospital ward was, and he indicated a mortuary, but when I asked if it was haunted, he looked at me like he's the man in Scooby Doo who has a rubber mask pulled off him in the final scene.  Anyway, I could see why it had won an award, I've been to some cracking clubs in the GBG and this was up there in terms of having all the elements that make a club good.  M.Lawrenson arrived, without the same door issues I had, with his customary Booths shopping bag and dressed for the winter 'because you can't trust Manchester weather' which led to a nice 20 second chat about cotton spinning and the wettest places in the UK (Preston is third).  I put my GBG on the counter so Matthew could highlight the entry, and our friendly barman commented on what a sorry state it was in compared to their copy!  Well, it's been around, and by late August, I predict it'll be properly falling apart.

We walked back towards Urmston and after some debate about our strategy re which pub we should do next, we went to the furthest one away, which allowed me to learn how much you can actually fit up your arse in prison.  Don't say a day out with Matthew isn't enlightening.

Our next pub, looked exactly as I expected.  Solid, stodgy, Holtsy.  Excitement was building.

And the main reason for my excitement was the line in the Good Beer Guide, declaring "not so much wet led, but completely soaking" which is a colourful way of saying "definitely not a food pub".  More humour and creativity in GBG descriptions is certainly welcomed by me, I've mentioned it before, and only North Bucks told me they'd take it on board when I told them they weren't doing their pubs justice with their dull textbook descriptions of unexpected gems.  Maybe it was all the prison/drugs talk, but this place really did feel like someone had injected you with a Holts OD on arrival - I thought the Morning Star in Wardley was a good example earlier, but this was up there with the Atherton Arms and a small number of others for unadulterated Holts bliss.  The barmaid was friendly, in a colourful haired no nonsense way, happy hour drinks were £2.22 and blackboards made you realise there was a 'Happy Hour' around almost every corner.  Other customers were so ingrained in the fabric of the building, they were effortlessly camouflaged.  Yes, the pure minimalism of this place seemed to stir a degree of creativity.  The GBG description made sense.  (Say any of this bullshit out loud whilst in the Lord Nelson, you will be rightly called a wanker and told to shut up or piss off).   Oh, and although they had Holts Bitter on both keg and hand pull, she didn't have to ask which one we were after, and it was top quality.

Well, that was a heart warming experience.  Could it last?  Well walking past a Sports Bar just at a time that someone equalised against Liverpool to a big roar from the scary punters suggested it wouldn't.  We were back on the main drag, and for the third time in the last week, outdoor drinkers were scattered outside a micropub trying to make photo opportunity difficult: 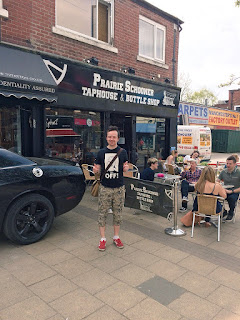 "Ffffnnnnneeeuurghhhh"  Can that just be my review for here?  I didn't dislike it outright as such, though Matthew can probably testify to my bleating for the entire time we were here.  It's just when you're in a micropub of fairly unremarkable micropubbiness, there's a constant gargling of a twild in the front bar, the staff are straight faced but 'pleasant', and the only other customer of note is an old woman's illuminated big face grinning into a phone, that you don't exactly feel you've recaptured the magic of the Lord Nelson.  Even my ale which had started off so well seemed to be declining rapidly as I got to the final few sips.  "He gave me a top up without me asking" said Matthew when I asked him for a positive I could stick in my blog.  I suppose the best thing was the depth of the place, much bigger than your average micro and brilliantly cool, and was particularly wary of Matthew melting as he'd come dressed as a guy who'd come to mend your boiler, albeit in a paisley shirt.  The decor was quite nice back here too, corner cabinets and stuff like something your gran would've had in the 80's but on the whole, a forgettable experience (for me anyway). 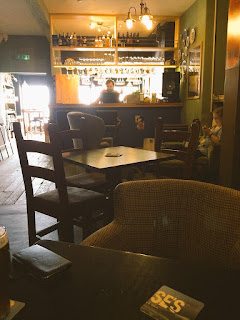 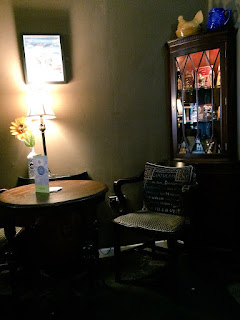 So, it was farewell to Matthew and back to the punk festival where I saw some great bands and drank some great beers, this was the worst one I found..... 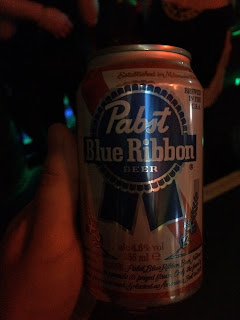 Ten festival pubs then, four more than I was hoping,  and I'm now giving myself a BRAPA rest til Saturday which will be tomorrow when you read this.

Now, to the Falcon Tap in York to meet my buddies as it is CLOSING DOWN for good in the next few days (short notice), so you can cross that one off your GBG.