BRAPA - Big Head on the Headland : Dad Day in Hartlepool


Highlighting every County Durham pub with a (superior brand) Stabilo green pen before the 2021 Good Beer Guide drops onto my doormat in late August is now very achievable.  That is BRAPA breaking news tonight for you all to digest.

A couple of months ago, I'd never have believed this when I told Father BRAPA (not a priest, but he did have a holy/holey jumper on today) I wanted him to be present for all Durham Saturdays.

My reasoning behind this, he's been a regular when it comes to comfortable car / train days, but I thought it was only fair to expose him to the true horror and pain of BRAPA.  Delayed rural buses, perilous walks on roads with no pavements, long walks to shut pubs, growling locals, phantom taxis and extreme late finishes collapsed in a KFC bucket via York Tap at midnight.  Yes, it is only fair.

And then, and this is the great part of the plan, he becomes so heavily invested in the quest to green up the county, he offers to drive me around any awkward outliers where there is no obvious bus result (I don't like the sound of Edmundbyers).

Saturday 16th November found us landing in Hartlepool, a town familiar to us from Hull City's epic league two days, but not one I'd say I've ever had a soft spot for like Darlington.  Today might be different. 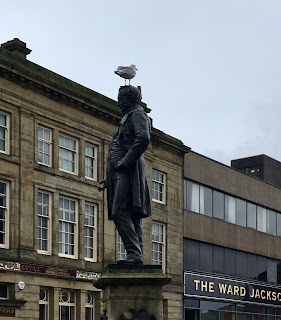 Our first move was to actually get a bus to somewhere even more desolate.  Peterlee was the name, a quite depressing small 'new' town (well, one year 'newer' than Dad) which he'd once visited on 'bank inspection' which sounded fun.  He reported nothing had changed, and under the grey sodden skies Peterlee looked at its most appropriate.

Ten minutes further on, we hopped off on the outskirts and walked around the corner to a village called Old Shotton (not to be confused with brother Malcolm).  I prayed this 11am opener was errrm, open, and the smoke billowing out of the chimney suggested either it was, or the pope was dead.

Dad showed his BRAPA inexperience by turning right (YOU SHOULD ALWAYS GO LEFT) and we were greeted by a couple of bewildered restaurant staff, stood in the darkness with an industrial sized kitchen roll sitting on the bar contributing absolutely nothing.  It would be easy to slag off the Royal George, Old Shotton (1632 / 2849) but for it was, a surprisingly upmarket attempt amongst all these old colliery towns, it achieved it well.  In the lighter, warmer, wood burner left, we found the handpumps and had a pretty top quality Tim Taylor Landlord , served by what I felt was an unnecessarily sullen barman considering (a) we were the only punters and (b) this part of the world is usually quite friendly, though I admit there are areas of Co Durham I've been warned about, but we'll get to them!   I worked out the bus back towards 'Pool was sooner than expected, so good job the beer was highly neckable.  Music ranged from 'Keep Your Head Up' by Ben Howard to 'Chapel of Love' by Bette Midler.  Make of that what you will! 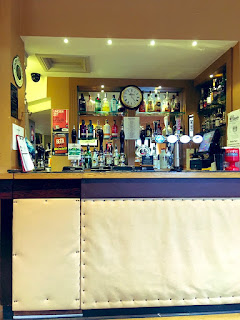 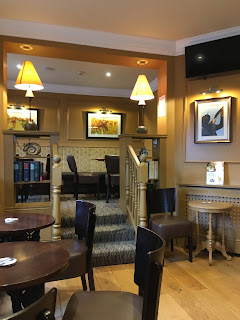 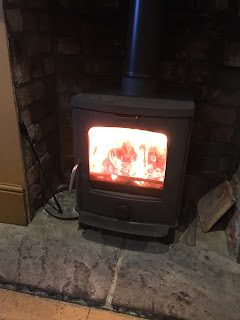 With the rain still drizzling down, we didn't take the bus all the way back to 'Pool but my BRAPA research told us to jump off at Blackhall Rocks for a 20 minute walk to High Hesleden where in neighbouring Blackhall Colliery, a mystery person keeps leaving packets of £2,000 dotted around the area.  SIX times police have recovered it, so Christ only knows how many times this eccentric / wealthy / motives unknown person has actually done this!  We only found out about this AFTER our visit to the area.  Shame.

The rural 20 minute walk to the village was fairly straightforward, a pavement was present, but disaster struck as the pub was closed as they'd gone on their jollies .......

A tough learning curve for Father BRAPA then, but I did want him to experience undiluted BRAPA didn't I?  He now insists I ring rural pubs in advance of the visit.  "Careful Dad, that sounds dangerously like common sense" I told him.

To be fair, on reading the GBG entry the following day, it advises you to do JUST that as the owners do close up when they go on holiday.  And how often does reading a GBG entry actually ever tell you anything valuable?  11.355% of the time actually, and that is a BRAPA fact.  It's usually "Fried Tofu and Curried Bean Stew Nights on the last Wednesday of the month" and I'm like, piss off, is this a Good Beer Guide or what?  No wonder you are a billion pages long!

The rain, which had mercifully ceased, started again right on cue, but the walk back to the bus stop didn't seem too far, and after a bit of Hartlepool jiggery-pokery where Dad spied the correct bus on the opposite side of the road, we were soon in Hartlepool Headland.

Google Maps couldn't quite accept motorised transport existed here, so I had us jumping off the bus anywhere and got lucky, the first of two pubs was just down the next side street ......

Absolute scenes (as the kids say) as Dad pulled instead of pushed, and ended up falling into the main bar at the Globe, Hartlepool Headland (1633 / 2850) with a guffaw and a snort, causing the old, tentacle clad seadogs playing dominoes to scowl wildly at us.  Jeez Dad, I don't normally need anyone else to embarrass me on BRAPA days, but 10 out of 10 for effort!  To make things worse, he was dying for a wee so had to then force his way through the blokes, the scowls turned to looks of utter contempt.  I got the £2 Strongarms in (the only beer on, offered it 'flat' or 'big 'ead'  to which I touristly replied "OOOH, GOTTA BE A BIG HEAD LIKE HIM (I point at a returning Dad), I HEAR IT IS THE HARTLEPOOL WAY AHAHAHA" which caused the locals contempt to turn to utter resentment.  The barmaid, an absolute star with a small hound (Jojo) following her like a shadow and a strong accent, could certainly read the mood in the room.  "I tell you what" she told us, "there's a nice fire through there, I'll take your drinks through, and you can sit in there" which I think was a nice way of saying 'you might get killed otherwise / stop upsetting our locals'.  Well, we did enjoy it in here, even if an old man did start jumping on the furniture and a walking stick fell over for no reason.  Quite a classic BRAPA pub from start to finish. 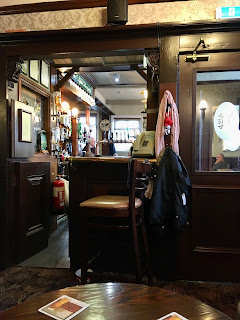 We'd not been in any hurry to finish our pints because the other Headland pub was a 2pm opener, or so the GBG said .......

.... but the sign on the door said 3pm.  Noooooo.  "It'll be gone 3pm by the time we are in only our THIRD pub" wailed Dad.  Well father, welcome to unadulterated BRAPA pure 100% filth.  (That wasn't my actual reply).   But 'twas true to say, we were having some rotten luck today.  Fate was testing him.

On the plus side, with 40 minutes approx to kill, Hartlepool Headland was a fascinating place to walk around.

Fish Quay's gates mysteriously closed slid shut as we approached, stopping me stealing any fresh fish for supper, I had a pee down the old Town Wall with a judgey cormorant looking on, and we ended up saying "aye" to a few dog walkers on the harbour as we ate our egg n tomato sandwiches. 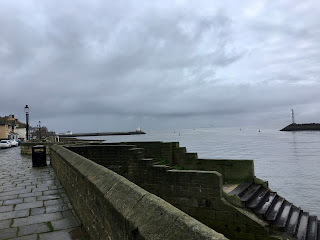 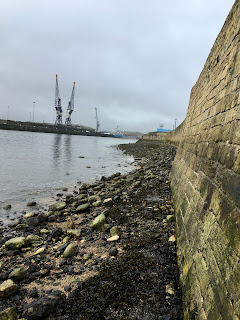 A few minutes before 3, and the pub was open we were relieved to see.  It seemed some had been waiting even longer than us. 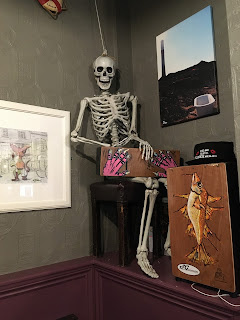 But a friendlier pub than the Fisherman's Arms, Hartlepool Headland (1634 / 2851) you will struggle to find, as the couple - we'll call them 'Hazel' and 'Glen', for that is what their coffee mugs said, though I guess they could've nicked them off a real Hazel and Glen and thrown them in the sea - gave us the warmest welcome, quite a contrast from our Globe arrival.  The pub was super traditional, in a different way to the Globe, and you could be forgiven for thinking this has been a GBG regular for many years, but turns out they only recently made it great, using their pension to buy it off the brewco, top commitment levels! Some quirky decor, the cash register being the most fabulous I'd seen, and Liquid Len noticed on Twitter, so I must be right, if you can't trust an Arsenal fan in West Bromwich, who can you trust?  Glen, whose mug said he was a 'spreadsheet king'  responded well to our interest in the local history / pubs / BRAPA, and brought out this cracking local pubs guide to sift through, brilliantly named "The Lion Roars and the Monkey Bites" - such scenes haven't been witnessed since the similarly fabulous Eleanor Arms in Bow.  Dad was right, the Headland is the 'original' Hartlepool, and it felt it, and had that 'atmosphere' you get in non-touristy British coastal places.  Portland is my favourite example.    Hard to believe we'd enjoy a pub more than Globe today, but this was it!  Oh, and I asked about the opening times mishap and turns out 2pm is summer hours, 3pm is winter, so careful if you are visiting. 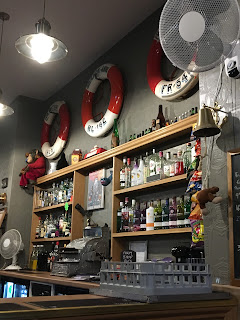 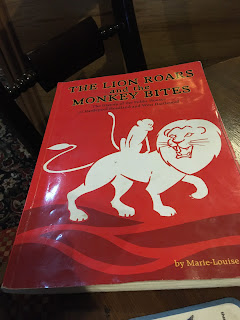 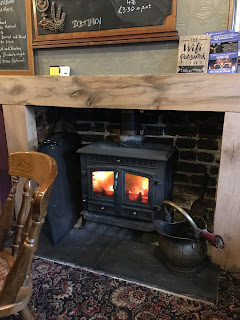 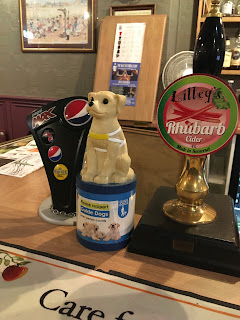 Phew, finally half way through the day as we took the next bus back to Hartlepool, delayed cos the driver was having a long smoke break!  Could today get any better?  (No is the short answer), but join me tomorrow for part two anyway if you can be bothered.  I'll keep the word count down to 100,000.