I've been pushing the boundaries on my Friday night Brapping, to see just how far afield I can make it without getting stranded and having to sleep rough.  Ripley/Alfreton was a decent effort when I was focussing on Derbyshire last summer.

Tonight (Fri 22nd Nov), with County Durham at the forefront of my mind, I made it to Newton Aycliffe which is plonked between Darlington and Bishop Auckland, a chilly rickety Northern train journey juddering to a halt for me to follow a nervous looking bag-lady off the train.

Places always look different by night fall, but Newton Aycliffe seemed to be exceptionally peculiar.  Founded in 1947 like Father BRAPA, it was a good 20+ minute walk to the pub, across a series of diagonal footpaths across green areas with endless housing estates dotted everywhere, and an inconvenient bridge over a river bisecting the town.  Thank goodness Google Maps knew what it was doing cos I didn't have a Scooby.

It was just oh so quiet (and still), Bjork in fact took inspiration for her hit on a Friday night stopover here when her steamboat to Reykjavik was cancelled due to an untimely guard strike.   BRAPA fact.

I smiled at a dog walker, who shuffled quickly into the shadows, but didn't see a soul otherwise until I arrived at the pub, tucked away, like all medium sized Durham towns, behind a McColl's, Methodist Church and a Twild play area. 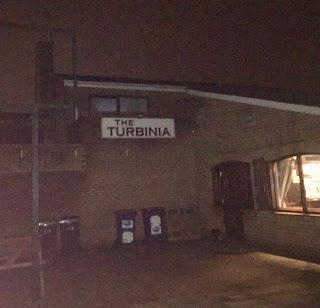 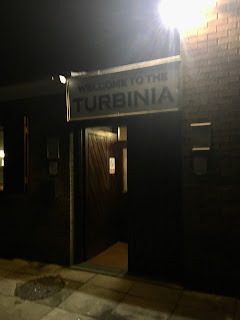 As you can perhaps glean from the mysterious photos, the Turbinia, Newton Aycliffe (1638 / 2855) more resembled WMC (with perhaps a hint of Youth Club) and is named after a Tyneside (spit!) ship if you wondered, which you didn't.  A bald man hovering in the doorway said 'aye' , shame I wasn't called Cliff then he could've said 'Ay, Cliff'  (sorry).  'Twas instantaneously obvious that I was in a classic mental North East boozer, and I was told to be careful of the dog Elsie, who was said to be a bit crazy - or "foooking radged' if we are to use the exact phrase from the night. This was perhaps why I took my pint round to the pool table section, but Elsie followed me regardless, and quick as a flash, jumped up, nicked my beermat and ran off under the pool table!  "She'll chew it up, but not swallow it .... probably" explain the bloke from earlier.  He tries to coax her out.  "I've got chicken ..... come out from under there you daft dog!" he says, rattling his car keys, but Elsie wasn't fooled, and only reappeared when he went outside to smoke.  The lady who served me was great, straddling the role of quirky barmaid and pissed local perfectly as you often get in these proper down to earth boozers.  When she admitted she didn't like lager, the bloke told her she MUST learn to love it, even if it meant putting some blackcurrant in it.  Her next act was more impressive.  Seemed there had been a raffle, she won a vibrator (a rabbit no less) and wow, I thought I'd heard it all in BRAPA but this bellowed, candid chat was something else.  Especially when the bloke said "....too complicated for me those things, can't get used to the speed settings!"  I'd suspected behind all those housing estate windows were horny buggers, (a bit like Ware in Hertfordshire), and now I was convinced my hunch was right.  Next, a woman on the tills in the local Tesco was 'outed' as a vibrator fan. "Oooh, you wouldn't think it of her!" says the bloke when he finally works out her identity.  Perhaps it was something of a relief when, out of nothing, our heroine puts on dance music at deafening levels.  I'd normally talk about 'killing the atmosphere' at this stage, but not in these circs!  I took my empty glass back to the bar just as two lads arrived to play pool, and left wondering quite what I'd just experienced! 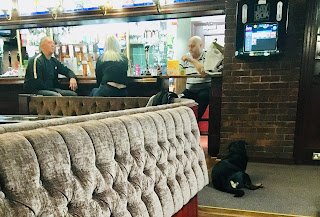 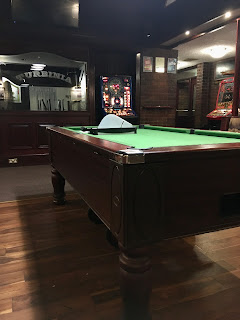 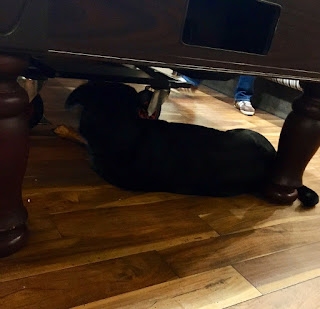 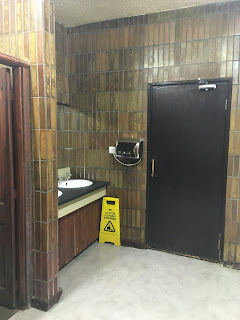 The further I got from the pub back towards the station, the more I realised the Turbinia was quite a classic BRAPA tick.  I am enjoying County Durham so far more than expected, and there'd be more of that in a fortnight, but for now, it was back to York godspeed, as I had an early start for the top pubby town of Rugby tomorrow.  Join me for tales of that one tomorrow.