Standing all the way from York to London Kings Cross wasn't exactly the ideal start to a Saturday BRAPA Special, especially after a moderately heavy night with Quosh and Chris Dyson in Halifax, but I didn't want to complain too much.  After all, I was on a Grand Central freebie thanks to the lovely Steve H of Twitter.  My last of the year.  And leaving it this close to Christmas, and when Sunderland were off to Gillingham, well I only had myself to blame!

Standing alongside me, a young lad who was off down to Barnet F.C. for a trial!  Not the perfect preparation, but he bumped into some girls he knew and they chatted about an ex Hull City goalie mutual friend, so that was kinda interesting.

Problem was, I was opposite the bogs, and with a stiff door and an uncertain 'vacant/engaged' slider, I spent the whole journey telling full bladdered Mackems whether they could go in or not.  Exhausting!  The things I didn't sign up for when I embarked on BRAPA are always the hardest.

At least I was first off at KX.  "Enjoy yourself ..... it's later than you think" said Mr Barnet and the ladies.  Probably. 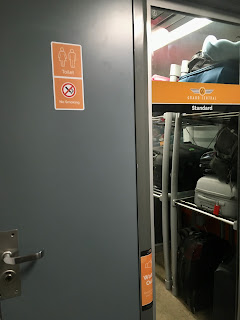 By the time I'd crossed London to Uxbridge and taken a bus North to the surprisingly rural spot of Harefield, the clock was ticking and I needed a pint with a new found thirst.

Down a muddy country lane I went, the pub tucked away in self-important posh grounds with some great views over the water, and a reminder that South Bucks was only spitting distance away. Would the pub make me want to spit, or errrrm, swallow my pride? 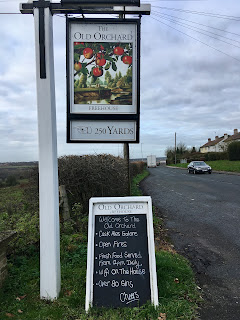 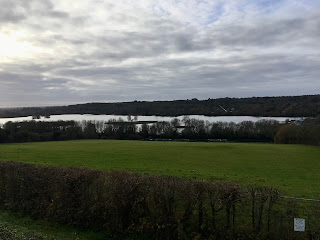 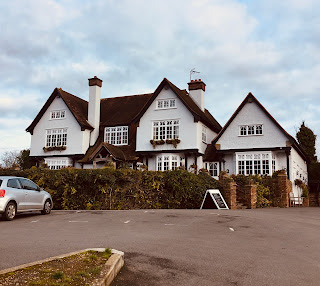 Old Orchard, Harefield (1651 / 2868) was, if you were in any doubt, a Brunning & Price pub.  I associate the chain with rural Cheshire, so was surprised to see one this far south, but someone tells me there's even one near Wimbledon so how d'ya like them apples?  (Orchard, get it?  Sorry).  Still, it sort of managed to out Brunning & Price even the most Brunning & Price.  My B&P bingo card makes it clear what you are going to get - a grand country house style setting, shaggy rugs, stuffed animals, quirky Victorian prints, smart staff who don't understand the concept of "I just want a drink", an overpriced average house beer, table reservations galore.  I paint a depressing picture, but I don't mean to, they are pretty cosy classy places to sit and have a drink at times, I don't feel an Ember level of hatred, but I'd not CHOOSE to drink in one.  After battling through a huge dining room of zombie lurkers, I hit the bar and a workhorse who looked like a Leyton Orient midfielder from the 80's got me a pint of Redemption Trad Bitter for £4.65 - the beer quality never convinced but he smiled more sympathetically at me as my 27.5 mins inside this pub progressed.  The pub was 95% restaurant, and I had to perch a bit too close to a couple eating a casual ploughman's by the fire (a full apple seemed a bit too elaborate but perhaps was another orchard nod!), their hidden dog perfectly camouflaged in the rug.  They had deep theatrical discussions about 'relationship needs' and 'feelings' which really accentuated my feeling of 'sitting too close'.  But I had no option, EVERY other seat had knives, forks etc. all laid out.   The beer towels read 'Banter & Pints, Beer & Pies' which didn't really reflect the 'vibe' in here.  'Bullshit & Prosecco' would've been more accurate.  A Mum took her ungrateful toddler twild for a 'pub tour' that she'll never remember when she's older.  "CAN I HAVE AN EXTRA HIGH CHAIR?" wailed a young Mum who'd strode purposefully to the bar like a runner up in The Apprentice.  Had she given birth again whilst waiting for lunch to arrive?   I couldn't get out for the influx of diners queuing at the door, so I went for an angry pee and looked for an open upstairs window I could abseil out of.


As I took the bus back to Uxbridge, I could at least admire the 2020 Good Beer Guide knowing I now only had TWO North London ticks to do, and they were both Wetherspoons, which seemed kind of apt.  Could I get them done today?

So typical then that West London temporarily distracted me because back in Uxbridge, and bear in mind, I'd never been here before I had a pub to do ....... 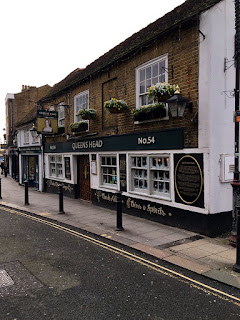 Ah, this was more like it!  Queen's Head, Uxbridge (1652 / 2869) was the perfect tonic to a posh B&P, being a traditional creaky warped effort, full of creaky warped old men, with the smells and charged atmosphere of a pub which had stood on this site for centuries.  Rare for West London Good Beer Guide entries.  The barmaid of Eastern European flavour was in the upper echelons of 'BRAPA barstaff 2019' season, and I made the best of a Greene Kingie range and went for the 'Rockin' Rudolph' on the basis it had the most LED lights on the pump clip.  I sort of hate Christmas themed ales so much, I actually love the misery of ordering them.  Inevitably, she asks if I'm CAMRA so I flash my card for a discount.  I feel kind of insulted she picked me for a CAMRA member, but then I looked down and saw the words 'BRITISH REAL ALE PUB ADVENTURE' emblazoned across my chest in a beer font, so couldn't really complain.  "3 and 6" she charges me.  'Errrm what century is this?' I wonder,  but she means £3.60.  Decent.  And a much better pint than in Harefield.  Next I made the bold move of sharing a table with three old locals - well, there was a Scottish one (the most engaging), William (the cutest) and the other one (the rudest but funniest).  They'd actually just fallen out with their Yorkshire friend for making an offensive joke. "I know he's from the frozen North but I didn't know his humour was that chilly!" they complained.  Then, there was an obscure cockles & mussels joke, a 'Just William' quip that would've made Tim Vine or Milton Jones blush, so it was no surprise our barmaid heroine appeared at our table and pretended to stamp on 'the other one's' foot for being cheeky.  I slid out of the seat, the three blokes barely even noticing.


Well that was a lovely West London interlude but let us not get distracted from the job in hand, completing North London.  So it was back on the Tube as far as Rayners Lane, my penultimate NL pub tick!

But a minor disaster had befallen me.  I'd left my (famous) orange scarf, which has appeared in so many classic BRAPA winter days out, in the Queen's Head.  I wonder which one out of the Scottish one, William, the Other One, the barmaid or Boris ended up nicking it?

Sad but no time to dwell, because North London is where 'Spoons started life and because of that, they always seem to be a little bit better here than in most parts of the UK ....... 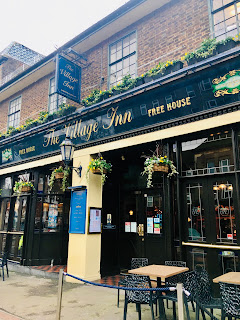 But during my first five minutes in Village Inn, Rayners Lane (1653 / 2870) , I was barely considering it to be even in the top 50% of Wetherspoons I'd visited in my life.  I didn't open the door properly, and got a scowl from a smelly man in a booth.  The shallowness from front door to bar is a pub feature I never like, as I find myself embroiled in 'being served' before I've mentally reset myself to my new surroundings!  Does that make sense?  As a result, there was a weird dischord between the barman and me, I accidentally whispered my order, and a weird 50p request made the whole situation even more unsatisfactory.   It was then I noticed I'd lost my scarf, and it looked like I had to share a booth with the smelly bloke and his mate from earlier.  But everything changed on a chance trip down to the loos, where I realised the pub opened up into this immaculate multi-boothed, peacefully, shiny mirrored lower level.  Again, I suspect this was an early 'Spoons where they perhaps took a bit more care in the pub design.  Now I could enjoy my quality IPA in comfort, an old couple debating whether Solihull was pronounced Soley-hull, before leaving their fried eggs like they thought they were contaminated and doing a runner.  Despite the huge amount of seats and booths available, Smurf Donald Trump decided he'd invade my personal space.  Maybe Boris had sent him to return my orange scarf, but it complimented his complexion so he decided to hang on to it.   But what a great 'Spoons this was, top 10%er for sure.


Join me in part two to see if I could finish North London trouble free, and what other pubs would I do to make up the magic 'six for the day'?