BRAPA is ..... PULLING THE RUG(BY) OUT FROM UNDER THE BEER GUIDE

Clean slate. SEVEN pubs to aim at.  "Astounding, astonishing" said fellow pub ticker Martin Taylor of the town back in May 2018, during one of many rural Cambridgeshire car trips, though perhaps he wasn't referring to Rugby at all, but my attempts to urinate out of a moving vehicle in the village of Abington Piggots?  It was hard to say.

I digress.  Rugby.  What could go wrong?   After all, I was accompanied by the second and third highest ranked BRAPA tickers in history.  Father 'Silver Medal' BRAPA and Tom 'Loosely (not Lucy) Bronze' Irvin.

We were perhaps doomed from the start.  Despite the 'rough around the edges' rugged town of Rugby I found myself in, not ONE of the seven opened before 12 noon according to WhatPub.  Lame.

Furthermore, I was so busy Googling 'author of Tom Brown's Schooldays' (Thomas Hughes?  The Steve Lynex of authors.  Anti-climax), I almost missed one of my favourite buildings in town who I'd done a bit of work for ......

Pre / Post Emptives therefore had to be the order of the day.  The Bull (not to be confused with the GBG listed Clifton upon Dunsmore one, 1.9 miles away) opened early.

Proper pub, not in the GBG on account of the 'standard' beer range, was our opinion at the time, though in the context of the day's pubs, the Bull was perhaps a bit too rough & ready and lacking a bit of love n x-factor for those gosh darn CAMRA compilers.  The landlady was awesome, a throwback and if she didn't smoke 50 a day, she looks like she should've done.  Ever alert, she hid from the BRAPA lens with a theatrical hand over the face.   The pub was full of ageing men, a look of desperation in their eyes as they chugged down their 5th pint of Fosters before the absent sun struck the yard arm, or whatever the phrase is.  SPORT on big TV's was the order of the day, you could've been in St Helens.  Norwich City's kit was put under scrutiny, but not as much as the Women's Big Bash League, live from Oz.  The Proper Job went down like the nectar it can be, and an Ancient with today's most indecipherable accent (quite an achievement given the competition) said that he wanted a student discount because he was from Rugby School.  Dad laughed, mainly so we weren't killed. 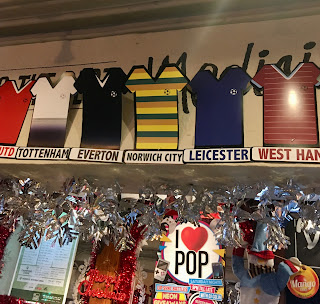 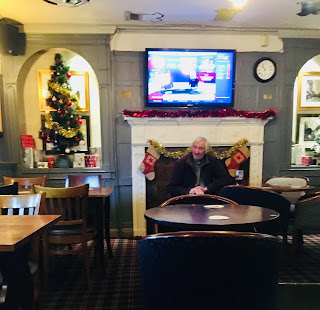 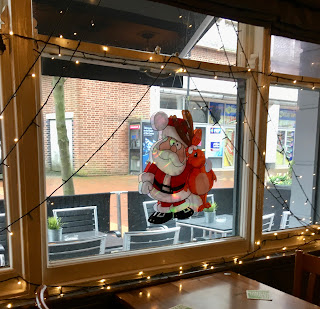 Still not 12 noon, and with my breaking news that the 'Town & County Club' won't be open at 11:30am like the GBG reckoned, we had time to squeeze in a further post-emptive before official 12 noon kick off time, just a half this time which is allowed under the BRAPA rules!

Best thing about London Calling! was the name, though the exclamation mark was already meaning those red warning flags were flashing in my brain.  Two years since this one made the GBG, and it was very much an upmarket breakfast cafe where the one ale on felt like a token gesture at best, the barmaid looking a bit sulky especially when we were only having half pints and no brekkie. Not that there was a free seat, and we perched near a signed 1966 England World Cup shirt, another rare highlight.  Dad did a very unique rendition of The Clash which cheered me up (and sounded more like the Thug Murder cover, though he isn't female OR Japanese as far as I know), and I'd be surprised to see this bar ever return to the GBG, but as history shows us in this pub ticking game, stranger things have happened. 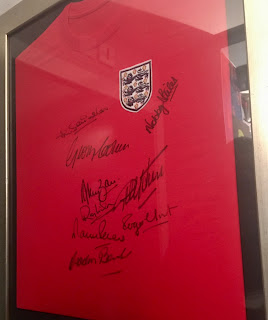 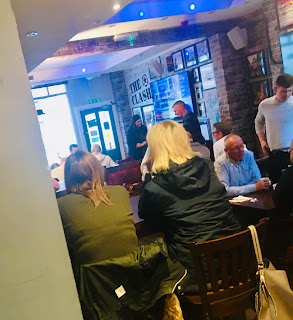 12 noon ticked around finally.  Could we finally get today on the road?  Problem is, I was already 1.5 pints in.  Tom had identified this next pub as one he had high hopes for, and it was just around the corner, so seemed a good place to start ....... 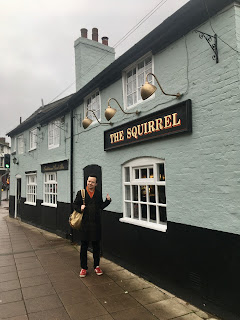 So THIS was what Rugby Good Beer Guide entries were all about!  A wonderful pub to rival any today at the Squirrel (1639 / 2856) , the benchmark being set by the fabulous landlord who earmarked us as 'pub tourists' from the word go.  BRAPA talk only intensified his helpful attitude (it can have the reverse effect!) and he talked us through the beers, though I made to clear I was only interested in the pub.  He finished his beer spiel with "..... and I'll be putting a new beer on THIS pump but it'll be about five minutes".  "I'm not waiting five minutes" I replied, shocking myself with my straightforwardness, so he compared me to his impatient teenage daughter!  The pub itself was similarly lovely, a narrow tile floored warped farmhouse of a pub, sunken and wizened from centuries of crazed Rugby beer guzzlers, bric-a-brac a-plenty, tiled flooring.  At one point, he came over to indicate that we were being too quiet!  With Tom in tow?  Errrm, impossible.  On the way out, we thanked him for a great pub experience and to show Rugby pub unity, he handed us loyalty cards for nearby Rugby Tap and implored us to visit next.  I lied and said we would think about it. 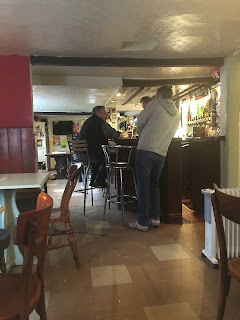 So in a hunched low stance, I made us cross the road and crept past the window in the opposite direction from the Rugby Tap, just in case Mr Squirrel was watching, didn't want to hurt his feelings.

Not that I have anything against Rugby Tap, but what with two post-emptives already, no way we were going to do a THIRD pub NOT listed in the 2020 GBG with so much to do in this town, I was falling in love with already.

A narrow path, a turn of a corner, and here we were, a pub I'd read much about and Martin Taylor had highly recommended it too.  Of course, there was bound to be a glitch.......


A roaring fire in the front bar, opening up into a huge room full of the drunkest happiest set of folk you will see in a pub at 1pm anywhere in the UK this side of the Christmas.  Titanic Plum Porter, Oakham Scarlet Macaw or Abbeydale Deception, served with a smile, wow kill me now, am in pub heaven!  But hang on, as I grab the green highlighter and frantically thumb through the book to reach the magic page 487, astonishment hits as Alexandra Arms, Rugby isn't listed.  "Howwww?  Whyyyy?  Nooooo?" I squeal to an equally surprised but less squealy Dad and Tom.  The irony of ironies, considering the 'Rugby Tap manoeuvre' , surely there must be shome mishtake?  This is like the best pub NOT in the GBG I had EVER been to!  With the life sucked out of me like the smoke being sucked out of the fire and into the main arena every time someone opens the front door, Dad reminded me that I was still allowed to enjoy this pub.  'OH YEAH!' I remember, and trot off to the bogs with a renewed spring in my step and smile on my face.  Everyone in the pub garden looks more drunk than those inside, I reflect.  And on the way out, I collide with a sloshed young couple returning from a smoke.  I smile.  "I like jollification and you look WELL happy" slurs the young guy, and leans in to kiss me on the cheek.  1:15pm in Rugby, everyone.  Lost for words.  Almost.


So this was turning out to be the day I'd kind of hoped, and still only 1:25pm as we head to our next pub.  Would it be in the GBG?  Could Tom hold his 2-1 lead?  Would I remember the journey home?  Join me for the answers to these in part two on Wednesday.