When we are considering the BRAPA Year End Awards for 'Best Walk Between Pubs', the unwise 4.2 mile trek from Monkhill to Carlisle along busy roads with no pavements won't be a contender. 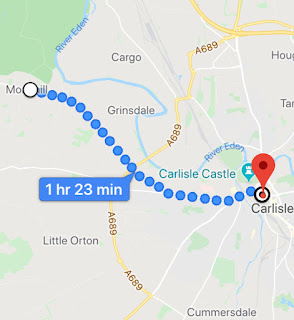 I did it in closer to one hour, but despite my fast paced walking throughout, the temperature remained perishing.  On the outskirts of town, a man hobbled out of an off license, breathed queerly, and told me it was the coldest day for a long time.  I said 'aye' cos I assumed it was the kind of thing Carlisle men say.

I'd also like to say a big thanks to the understanding drivers, who didn't try to mow me down, and swerved into the middle of the road where possible to keep me and my dream alive of one day ticking off every pub in a given Good Beer Guide.

Anticipation for pub five had been building, and herein lay the problem, a GBG regular with glowing write-ups, it was perhaps inevitable I'd be disappointed ..... 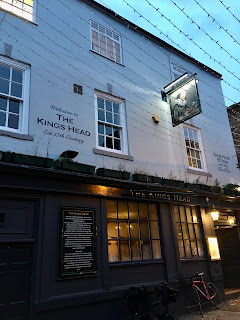 Having enjoyed the Howard Arms so much back in 2004, I kind of presumed King's Head, Carlisle (1629 / 2846) was the modern day 'best real ale pub in Carlisle' but it didn't feel that way.  Despite a warm atmosphere, there was something very wine bar about the place.  Middle aged couples perched on high awkward barrel seats with nowhere for your legs was the order of the day, the music was terrible and although Heart of Northumberland in Hexham would be a cruel comparison, it wasn't a million miles off.  I tried offering a stern looking blonde lady a stool, her husband had plonked his lager on my table, but she told me she'd been sat down all day and fancied standing up.  With the low beams, nooks and crannies, this pub wasn't for standing in my opinion.  My stout by those Cumbrian Legends was warming, and the beermats interestingly advertised the pub I was visiting next.  Perhaps a late Saturday afternoon / early evening wasn't ideal visiting time, and I imagined Martin Taylor sat here alone on an innocuous Tuesday afternoon in Feb enjoying it muchly.  Signs after all DID say kids and dogs were banned, so surely it should've felt pubbier than this! 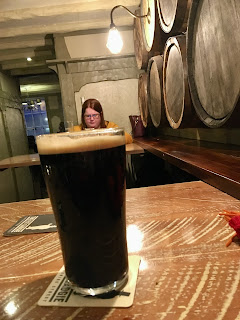 My final pub of the day (the Spinners was just out of reach with my train back being a fixed ticket) saw me tackle the more crafty modern side of the Carlisle 'scene', and a beefy blonde dude scowled up at the lens just as I was taking the outdoor photo, so this happened .......

And despite a conciliatory raised hand in half apology, half greeting on my part, the scowl continued on into the Fat Gadgie (1630 / 2847) which set the scene perfectly, as the incident reflected what was in store, a place full of craft beer lovers who took themselves far too seriously and were so caught up in their beer tasting, lacked a bit of good old fashioned humour, comradeship and warmth.  Shame really, as the place had a bubbly hubbub, the ale was top quality, and stood at the bar hoping for a happy drunken chat with some crazy person, it reminded me a bit of the Hullaballoo in Shipley I'd loved a lot.  When Beefy Blonde Dude returned to the bar, I pulled my hat down over my eyes so he didn't recognise me (a Newark Station-esque tactic), but could hear the staff in panicky tones rattling around in the fridge " ..... we know you've tried everything on draught, but we've got a few can and bottle recommendations lined up for you!"  Maybe he was some angry famous beer god.  Reminds of the time I went into Slater's wanting a posh pinstriped suit tailor made for me, but they just tried to sell me something 'off the rack' and then an old gent came in and they took a tape measure to his inside leg before he could blink.   Such were my thoughts at this late stage!  I ended up trying a couple of exciting non handpulls to see if this endeared me to the pub a bit more, but no one cared. 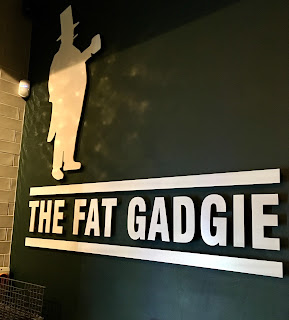 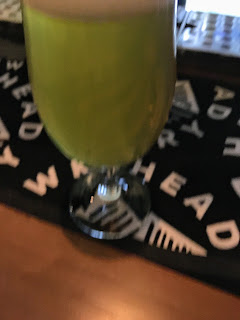 So I can't really say I enjoyed this trip to Carlisle, but I will be back before August 2020 to do the Spinners and those GBG pubs to the east/south of the town, so plenty time for it to redeem itself.

A more reliable, fantastic town in the north is Darlington.   Brittania, Half Moon, Olde Vic (RIP), Quakerhouse, Snooker Club, bona fide classics.  Don't forget that Mediterranean place, the first to give me a free pint for simply being BRAPA.  And I'll always have a soft spot for down at heel dosshouse, Hogans, my first Darlo pub ever.  Okay, so Hole in the Wall and Number 22 bored the shit out of me, but you can't have it all.  Even that 'Spoons with the Club Sandwiches is decent.

And it was Darlington I found myself the following Friday evening, and what a 'fun' concept for me to change at York like it is some weird foreign city!

I'm sat there in Filmore & Union, enjoying a coffee on the astroturf before 'la connexion', when a man random starts barking "SHIRLEY, SANDRA, SHEILA!" at his missing wives, making everyone jump out of their skin.  I hoped it wasn't going to be one of those nights.

Squashed on the train, a businesswoman pressed her mobile phone against my face and 'talked shop' all the way to Darlo.  What did we learn?  Well, she doesn't want to tread on Hannah's toes, governance is all important, and it is imperative we don't get into this position again.  I couldn't agree more, I thought, as I squeezed off the train into the cool slightly intimidating Darlo night air.


ORB Micropub, Darlington (1631 /  2848) stands for Orchard Road Brewery and not 'Ordinary Real Boozer' as I'm sure I'd been told (by my own imagination).  The bar blockers parted and stood up for me but being a micropub, of course they had to make a 'humourous' show of it.  "I had a numb bum anyway!" said one bloke in case I thought he'd been doing me a favour.  As I selected my ale, he seemed to be thinking out loud, like all good MBB's.  "Oooh, shall I order a takeaway tonight?"  'YES!" replied the barmaid a bit too quickly.  But what type?  Well, a toothless guy suggested he goes Indian.  He liked that idea, as did barmaid.  But was this my time to contribute?  I suggested he shouldn't rule out a pizza.  A brief pause, and then everyone carried on, like I'd never said anything!  'OOOOF, BURN' (as the kids say).  I liked the ORB, though I can never quite get my head around me any of Darlo's attempts to go a bit more upmarket than your traditional pub.  The tinkling lounge music created the atmosphere they wanted, but seemed so un-Darlo.   After a brief unhappy spell back-to-back with a group of bawdy men by the staircase, I moved to a radiator where a woman told me it was sweltering and I made a joke about piles which no one really asked for.  I was happier here though, people smiled sympathetically, proof piles beats pizza every time for micropub banter.    I went back for a half of something rye, noticed the owners are called 'Clough', they probably wouldn't say this pub is the best in Darlington .... but it is in the top one.  With beer t-shirts hanging from the ceiling, billowing out like beer bellies, it was advisable I didn't get too comfy, and trotted back to the station. 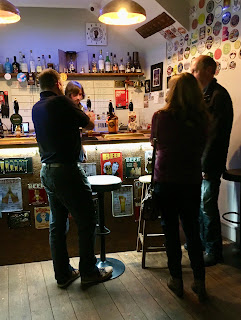 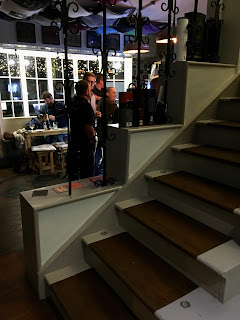 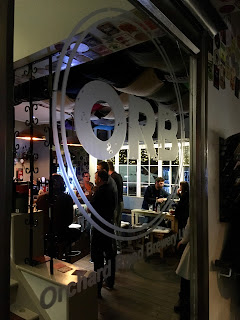 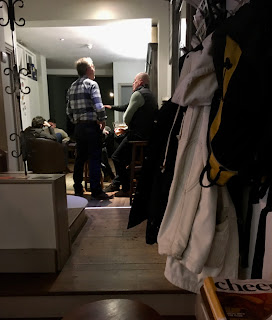 With my York train delayed slightly, all I could do was pop into my original Darlington favourite, the quite rough, spartan Hogan's.  With beer on like Magnet and Imperial, which I ended up having a (very excellent) pint of (cos no way I could order a half with these nice gents at the bar!) , you had to admire the time warp that this pub is stuck in.  Someone had kicked a hole in the toilet door, last time I was in here, I saw a woman get punched by the fruit machine, but she punched back twice.  Oh, and am sure it was the same barmaid who served me in 1999 when Father BRAPA told a story about Quakers to John Watson on their first meeting, a historic moment in my pub history! 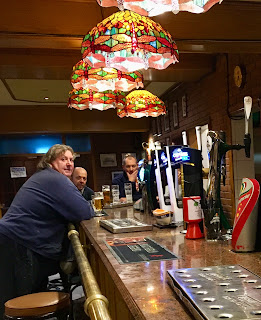 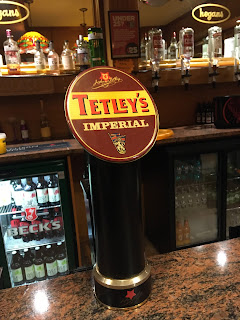 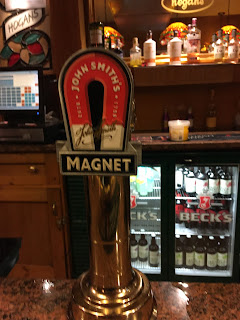 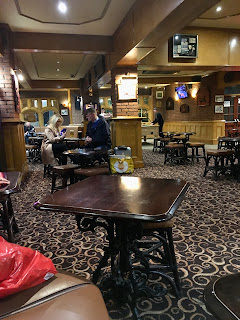 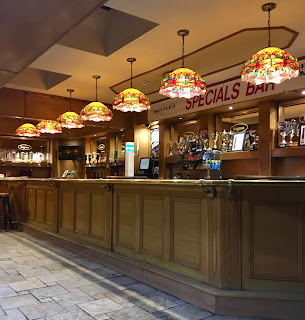 Anyway, a busy day was planned back in the North East tomorrow, which I'll start telling you about tomorrow.  I'll catch up on these blogs one day, promise!