There aren't many times in the calendar year when BRAPA would prefer NOT to be in a pub.  But 'Mad' Friday (tonight) is one of them, just the thought of busy pubs three deep at the bar, ticket only in some cases, full of 'once a year' pubbers with no idea how bar etiquette works, wearing their shitty Christmas jumpers, pissed up since lunchtime, well it kind of fills me with dread!

And 'dread' is my middle name, apart from Roger.

So that is why you find me here at home, 11:15pm on 'Mad' Friday with a cuppa and a brace of chocolate digestives, writing this blog, listening to celtic punk rock, avoiding the gaze of Robbie Williams across the room on Graham Norton (not literally).

Rewind to last Saturday morning and an ill wind blew across Manchester Victoria station, made colder as trains were delayed and cancelled left, right and centre.  I was with Father BRAPA, Hull City's Charlton away game had been moved to the previous night, and Tom Irvin was unavailable due as he'd been roped into some extra curricular activities  .....


So we'd been creative and come up with a Lancastrian / Greater Manchester rail adventure.  I was bursting for a pint when we finally reached our first pub, three quarters of an hour late at 11:48am, chunky little hailstones falling from the sky, by gum, it were proper brass monkeys ...... 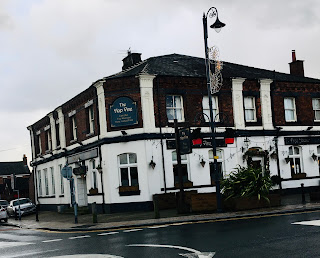 And what an absolute force of nature the Hop Vine, Burscough (1657 / 2874) was, deservedly thronging with festive folk.  The tone was perfectly set by what seemed like an army of vivacious young barmaids buzzing from bar to bar, really hospitable and when Dad commented how many older gents seemed happy to sit at the bar and not seek out a seat, I think I could understand why, the dirty old dogs!  I got in the Hoppy Blonde, a cracking ale which seemed to be brewed by the pub itself, pump clip a fairly accurate representation of the staff except most were brunette, or ombre at least.  Dad sought a seat, and thought he had located a comfy looking raised area 'twixt Christmas tree and dining area, but he was intercepted by a busy bloke who instructed him to sit in the 'back bar'.  Turns out, this meant 'at the back bar' as in perched on the bar in an empty dining area.  Could've been an unsatisfactory outcome in a lesser pub, but was fine here as all was jollity, and we perched as a series of misshapen lemons, oranges and limes were chopped with a ferocity you don't get in a southern Brunning & Price.  "It's like a Whitehall farce!" commented Dad looking superior like the lord of the manor surveying all from the bar.  No idea what he meant, but it is probably definitely a keen observation.  It'd be nice to witness last orders here, for they had a horn rather than a bell.  "Was that the gents or ladies?" I confusedly asked Dad returning from a loo visit before we left.  "You cannot assume gender in this day and age" he smoothly replied.  This pub had changed him, and you can't say fairer than that.  Great way to start, worth the wait.

The air was bitter but at least the sun was now out as we came to the second of two GBG 2020 listed Burscough pubs, standing on the edge of a canal on one of the scariest roads to cross of the year - honestly, so frustrating than not being to get into your GBG tick because the road is so difficult to cross.

Old Packet House, Burscough (1658 / 2875) was a decent pub, but lacking the spark and pzazz of Hop Vine, yet in some ways quite similar with the bare boarded Christmassy entrance to the bar, and careful balance between attempted upmarket dining pub and honest drinkers pub. Quite the music venue too, the Shamones sounding the most fascinating of four upcoming gigs!  The ales were Bowland, mine was Gooseberry, I'd never have picked it if I'd not seen the beer clip, cos beer tastes like beer to me.  Apart from when it doesn't.  And you won't get any more sense out of me on that particular subject.  'Throw your beer blogs in the sea, just read BRAPA' (new slogan for 2020).  At the moment, it seems a weekly BRAPA theme is 'smuggled sandwiches/arrogant armchair Liverpool fans',   and as we settled into the hidden front of the pub by a lukewarm radiator, the booming commentary of Nigel Pearson's Watford v Liverpool at Anfield rang out.  And as Nigel himself might say, the barstaff were ostriches as Dad and I were able to eat our sandwiches undiscovered.   I guess one could argue that Burscough is near enough Merseyside to suggest these LFC fans are more acceptable than some, but they were still utterly unbearable.  So a 'nice' pub, but it won't be one I'm telling the grandkids (not MY Grandkids ...... errrrm steady on Mr Savile!) about on my deathbed in 2057.

And join me on Sunday for tales of Parbold, Atherton and a chaotic bit of Manchester.