BRAPA is ..... PARBOLDLY GOING WHERE NO TICKER HAS GONE BEFORE

Of course, the title would only make sense if fellow pub-tickers Taylor & Mackay hadn't visited the two Good Beer Guide 2020 pubs at Parbold, and I'm pretty certain they have, probably back in the 70's.

If they both had easily achievable ticks like these, they wouldn't have spent this weekend driving around 15 obscure Welsh micros, spending 7 minutes and drinking half a 9.5% leek & lamb DIPA in each, which is almost exactly what they have been up to.  Oh, and Happy Birthday to Martin while I'm here.

Rewind to a week last Saturday, and having smashed Burscough (technical term), Father BRAPA and I huddled under the inadequate station facilities, and as I keep saying, by gum, the air was bitter.  'Colder than keg' to borrow a phrase from a local York CAMRA friend called 'GK Smooth' (I promise I'm not making this up).

Once in Parbold, we had a bit of a problem at the station underpass ......

Luckily, it wasn't the only way out of Parbold station (remember when I damaged a toe wading through a stream barefoot in Grosmont in 2014 in my attempts to get to Beck Hole?  Neither do I)  but the watery theme continued as some very committed fishermen were having a competition ........


We walked on to the furthest of the two pubs first, on a main road out of town and so cold was I, no outdoor photo pose was demanded. 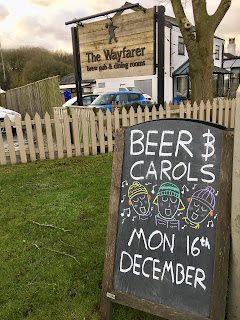 I often write about pubs where my experience improves as each minute goes by, so it is interesting for once to tell you about a pub which initially impressed me, but by the end, I couldn't leave quickly enough!  We entered the peculiar Wayfarer, Parbold (1659 / 2876) to a sort of hybrid reception area / Aladdin's cave, before realising the bar was beyond.  Problem Child was the name of the on-site brewery, and with ales called amusing things like Good Spankin' , Tantrum,  Little Punk and Big Girls Blouse.  I've had them before and always liked them.   They even advertised it as a place where the 'problem child' (me in this scenario) could buy nice Christmas gifts for the Father BRAPA's of this world.  And although there was an obvious dining bent, you felt that the real fire, low roof and rugs made it a wholly welcoming to the drinker who wants to have a good sneer and natter.  But as time ticked on, and a previously 'tart' beer slipped into 'on the turn', more and more posh pashmina (poshmina?) Mum's with buggies and the problem twilds of the future, the scales fell from my eyes and the whole thing felt a bit of a posery ramshackle mess we were glad to see the back of.   Shame as it had been a promising start.

If something ultra-traditional, boozery and unpretentious was what we needed, then Parbold's next act was more impressive in what was probably my pub of the day.

With a roaring coal fire, three different drinking areas, bench seating, zero food, a pool table and Nigel Pearson in duplicate bemoaning the first of many defeats under his Watford tenure (how long before he goes mad and shoves a microphone up a reporter's bum or something?), Railway Hotel, Parbold (1660 / 2877) was the exact epitome of why I love pubs.  Funny really that if one of these pubs were to feature in the Good PUB Guide, it would be the Wayfarer.  This place was almost deserted too when we entered, proof either people in general have no taste whatsoever!  Unless it is just me!  Our barman was a personable blonde man-bunned young chap, in Hull City terms, very much Jackson Irvine and Tom Eaves combined.  Calling him Tom Irvine would be far too 'problematic', so Jackson Eaves it would have to be.  On seeing two Tetley's pumps, I told him and Dad that my theory in pubs is that if a beer is showing twice, it must taste doubly good!  After West Ealing / Greenford last week (London Pride pumps x2 x2), I'm not sure this is a 100% proven way to order beers, but in any case, I loved my pint of Tetley's and Dad loved his Prospect Silver Tally or something.  And once the post-football clamour died down and a quiet moment of reflection set in, you could listen to the pub and you know what, it was purring like a contented cat!


Now for the tricky part of the day, the 'long walk'.  We reached Atherton a few hundred stops up the line, a place I've been to several times in the course of BRAPA history but each year, it likes a to add a new random GBG entry (always a proper basic boozer that has had a recent makeover and 'new life' breathed into it).

From the comfort of my York flat, Google Maps suggested a 1.2 mile walk but if you've been to Atherton, you'll know time & space work differently here than anywhere else in the UK, so that walk became 0.8 miles when we got off the train, which was a bonus.

Atherton also has a tendency to drain battery out of mobile devices, probably because it is still 1982 in Atherton and isn't compatible with modern technology.  Therefore, my outdoor photo doesn't exist.

But not to worry, all the life was indoors at Wheatsheaf, Atherton (1661 / 2878) which felt, as the kids say 'lit' from the off. Okay, so I suspect we didn't quite reach Martin Taylor levels of entertainment here (he took an amazing video of a punter randomly performing karaoke on his recent visit), but keep your wits about you when you come here, cos it really does feel like anything could happen!  We were getting close to full time in the football, and with BRAPA regular Jeff Stelling keeping us abreast of events, a Bolton fan farted unashamedly and the neighbouring random Geordies claimed they supported the 4th biggest club in europe and made small talk with him.  Blokes in Hi-Vis blocked the bar, winked and said 'alreet' to me as I edged my elbows in the get the Blonde Witches in.  Top quality.  Dad produced two packs of Mini Cheddars from a magical pouch like some special festive kangaroo, and we didn't even try to eat them on the sly!  With L**ds fucking up a 3-0 lead and more Stock, Aitken and Waterman playing than you'd ever thought would be possible, you had to admit you were in quite a special place, with extra emphasis on 'special'. 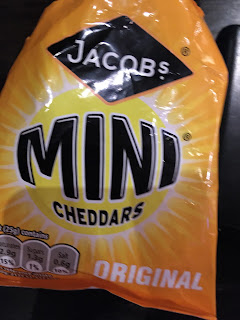 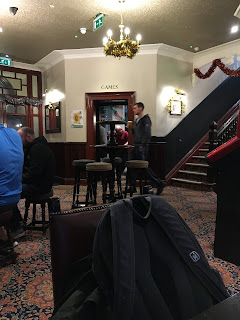 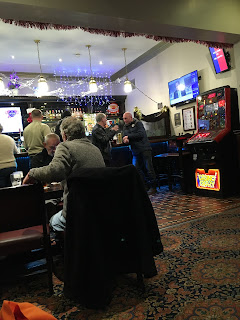 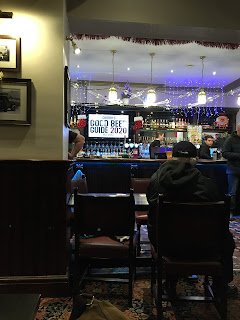 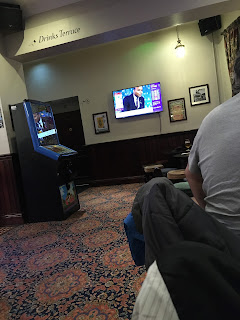 A few stops further on was the looming city of Manchester, which 98.7% of pub goers like more than me (and that is a BRAPA fact) but at least it had a couple of new entries to chuck at me this year.

We had briefly contemplated a trip to Rochdale's Medicine Tap (whatever that means) but as i still have the Oxford to do, I thought they twinned better as a Friday nighter, so a short walk from Victoria station it was.


Actually, I should mention that on the heaving train into Manc, we got chatting to two young ladies who were off to watch a band which I thought were 'The Cortinas' but why would a Bristol Punk band who split up in 1978 be back and popular with the Manc kids of 2019?  A bit of research told me it must be the Courteeners, very much the Indie Rock Tandlemen of their day (well, they are from Middleton and must love their John Willie Lees).  Anyway, I was given a can of Raspberry Mojito that they hated so that was a nice chaser before my final pint of the night.  In the Pilcrow (1662 / 2879), it was my round so Dad, just wanting an OJ,  sat at a surprisingly free table near the entrance as the place was absolutely rammed.  I fought my way to the bar and I was next said the barmaid and people around me, which seemed an amazing result!  But the guy getting served ordered three more pints of the house lager, then three more, then a glass of wine!  "Oh he is taking the piss now!" complained Focused Kamil Grosicki (FKG) to my left, with Respectable Gallagher Brother (RGB), behind me to the right, agreeing.  I was beside myself when the round finally ended and with the barmaid suffering temporary memory loss, and served a Chubby Robert Peston (CRP) before me!  RGB told me it was 'utterly farcical', FKG let out a small wail and looked ready to stab someone.  Furthermore, the House Lager chump and his mates had booked out the front of the pub so Dad was usurped, so I thought he'd given up and left the building until I noticed he'd got a bench behind me.  You might think in all this chaos, and being a modern style drinkery, that I'd not enjoy Pilcrow, but it had a really good atmosphere, the folk actually cared, beer was ace, punters really nice and I can imagine it'd be worth a visit on a quiet weekday afternoon, though probably a bit less fun!


So a great day out, six pubs achieved, which means the dream to keep the BRAPA record of 448 pubs this year alive goes on.  True, I'll have to do a bit of extra-curricular BRAPA though if you follow me on Twitter, you'll see I've done just that last week.

But up to 434 as of 14th December, looks now like I definitely should make it despite Christmas likely to slow me down a bit (no time off work, rubbish transport, dodgy hours etc.)