So, here we were, Father BRAPA (achieving a club record 23 pub ticks for the month) and myself, two thirds of the way through Bishop Auckland, halfway through Spennymoor, halfway through our day, but with plenty of work still to do to achieve my six pub target.

Back in Spenny Central, I saw a flat roofer on the horizon.  I groped around in my left arse cheek pocket, not through fear or due to a nervous tic, though perhaps a nervous pub tick, but I recognise a Wetherspoons when I saw one and I knew pair of 50p vouchers courtesy of Pub Curmudgeon would help that beer taste even better ....... 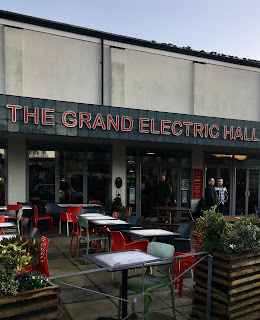 The Grand Electric Hall, Spennymoor (1646 / 2863) is Martin Taylor's favourite Wetherspoons in the UK, and had this not been a rushed experience full of nerves and tension, I'd probably be able to see why, as luminous steps gave way to fruit machines before a bar around the corner in this immaculate former cinema, where alert looking staff with flashing eyes in the shape of cherries and water melons ask what you like before you've got within ten feet of the bar.  This was Las Vegas with a soul.  Not that I've been, but you don't get this in Leicester.  Up some steps and into a seat by the front window, Dad's rucksack pulled him downwards and beer spillage ensued.  This left me nervous throughout, as an already tentative old bloke had to keep walking through the spillage to get between toilet, bar and seat.  I was living in fear he was going to slip and break his neck.  Remember back in Hartlepool & Billingham a fortnight ago I explained how I was using these Durham trips to give Dad the 'real' BRAPA experience?  Well more of that here.  Brad Wight had helpfully told me a taxi rank opposite the pub would be our best means of getting to pub five, in a village.  We could see said taxi rank from the window, but Dad (admittedly befuddled by a minibus full of garish party goers parked in it briefly) said I should ring one, which I did, but was then was paranoid it wouldn't show.   So we had to down our drinks quick-sticks and go and stand at the taxi rank anyway!

So despite my pleas for Dad to trust in taxis, he just couldn't and an unscrupulous interloper pulled up and tried to kidnap us anyway.  Dad was all for it, but being a chap of a high moral code,  I didn't like to leave the one we'd phoned for all high and dry, and thankfully he turned up in the nick of time.

Happily on our way to the village of Middlestone, I gave Dad an unofficial BRAPA warning, putting it down to inexperience, for if rural Bucks BRAPA taught me one thing, it is taxis will show eventually as long as you are willing to wait all day! 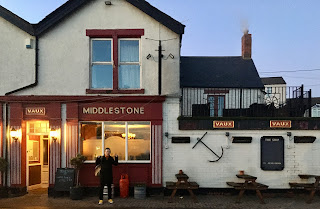 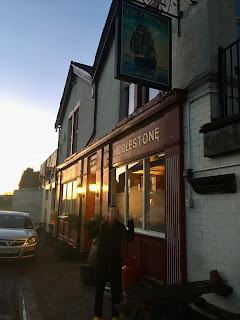 With the light starting to fade, we entered the Ship Inn, Middlestone (1647 / 2864) which might go down in BRAPA history as having the loudest speaking locals in a pub ever.  Were they all deaf?  Why was everyone shouting?  The bar area was cosy, it felt the right time of the day for a pint of Double Maxim to 'relax' me (not that I wanted to slip into my usual 'can't remember the 5th pub' syndrome), and knowing we had our sandwiches to eat, Dad expertly led us to a half-secluded room to the left, full of nautical themed tat, very nice.  This was the side room that had been lacking in the Drovers Arms at Monkhill three weeks back, and proof that this pub was of high enough quality to retain a great atmosphere whichever room you are in.  With a buggy blocking off one entrance, Dad slyly shuffled across the bench, out of sight of the barmaid, and gobbled up his sandwich, as we didn't want a repeat of our telling off in Rugby last week!   I noticed above the bar, lamps I recognised, and I swear they are the same ones they have in Hogan's in Darlington, so I wonder if they come from an old brewery like Vaux or something?   Great pub this.

Luckily, unlike Spennymoor, buses do actually run back to Bishop Auckland from Middlestone, providing the bus turned up.  I could NOT get over how much the temperature had dropped as I kept going on about it, must've been easily the coldest night of the winter so far .......

The bus arrived and it was a pretty low key journey, a bag lady and her hidden Quality Street were the highlight ......

Back in the Bish, I was still wittering on about the freezing temperatures and our constant walks along Bob Hardisty Drive past Halfords.  "We've seen more of Bob Hardisty today than his wife!" I told Dad, which I thought was a decent line in the circumstances.

My phone then froze, so I couldn't capture the outside of the pub on my camera, I vowed I'd return mid-pint, but such was the type of pub it was, I never got the chance!

But it was evident from the off that the Green Tree, Bishop Auckland (1648 / 2865) was a proper honest, rumbustious, community drinkers local where anything goes.  Well, within reason.  Perhaps that is why I had an insane rant to the barmaid and a local about the freezing temperatures and remember thinking 'I hope they'll realise I'm as insane as everyone else in here!'  With seating at a premium, Dad did well to squash in between two groups but being a bit Greene Kingy, I found the house beer dreadful and wish I'd gone for the Fireside, and couldn't work out if it was on its way out or just bland.  But nothing bland about this pub, and soon some highly motivated locals joined by returning Geordies were asking what our game was, and loved the idea of BRAPA as I brandished the GBG.  They gave us loads of fine tips, I remember Consett's Grey Horse featuring prominently, I was told to avoid Easington and pubs in that similar East Coast area because the locals wouldn't welcome me like they had in here!  'Twas all a bit of a whirlwind, Dad was even more impressed with the pub than me, but with mention of a preemptive before the train, we decided to get moving!


So back on Bishop Auckland, what looked like a bottle shop actually was a bar too, and actually DID have a handpull on.  Preemptive?  You betcha!

So much more modern than we'd been used to in any of our pubs today, but still had the cosiness and friendliness you come to expect from the North East, here at Caps Off, Bishop Auckland.  The gaffer, a bearded wooly hatted dude who reminded me of a modern day Royal Engineer / Old Etonian from those 1870's football team photos gave us a pint and a half of this most glorious stout, no idea what it was called, Dad's half served in what appeared to be a candle holder!  As the place busied up with shrieking groups, we were glad we'd got in whilst seats were free and squinting through a window into the darkness, Dad spied a pizza van outside!  Before I knew it, he'd finished his drink, got us lovely mini (very garlicy) pizzas for the train and was knocking on the window for me to finish my drink and join him.  Flipping 'eck, great move Dad, way to end a great day!


Train conductor said he was jealous of the smells of our Pizettes (not to be confused with Roxette, RIP) and after a change at Darlo, it was more Sleeping on my Train than in my car (sorry) before we made it back to York.

I felt that today was an easier, much cleaner day than the Billingham/Hartlepool one, but Mummy BRAPA did tell me the following week that Dad had been tired all day Sunday and I'd been pushing him too hard!  Poor poor me, always the villain. 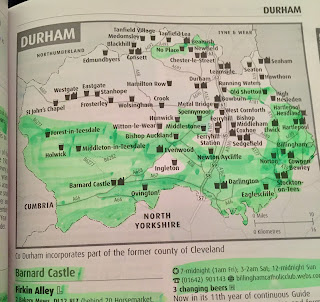 I will catch up with BRAPA blogs, I'm determined to do that by the end of the year!  But then again, I want to get West Yorkshire complete also by the end of the year (four more pubs to do, all on different days!) so squeezing everything in around Christmas and New Year will be a nice crazy challenge for me.

Stayed tuned folks, and thanks for reading.