So, we are at the mid point in the day (last Saturday) and I was walking down a country lane having just enjoyed the splendid Blue Bell in Maxey.  With no GBG pubs in sight, I was thinking 'post-emptive'.

In the 2017 GBG, there'd been a pub, another Bluebell, at Helpston, a village formerly in Northamptonshire where a bloke called John Clare was born.  He wrote poems, was a bit insane, and called the song thrush a Throstle before those bloody West Brom folk and Farsley Celtic tried to make it cool.  And he was Shakespeare AND Byron in a former life, so he said.

I didn't have time to learn much more, I didn't even have time for more than a half or 18 minutes in the pub itself before my bus back to civilisation (IF you can call Werrington civilisation).  But that doesn't matter with pre and post emptives, and that's BRAPA rules so stick it up your Thros-hole.

So yeh, under the circs, I didn't fully get to grips with Bluebell at Helpston.  I felt embarrassed ordering a half in front of three stern men sat at the bar who were quite friendly, and just like Maxey, promised me the barmaid would appear shortly.

I sat behind a wall so no one tried to slow me down from drinking my speedy half as this was one bus I couldn't afford to miss.  The pub felt a little bit namby pamby, emphasising just how good Maxey and Market Deeping (and even Bourne to an extent) had been.  Gin menus always annoy: 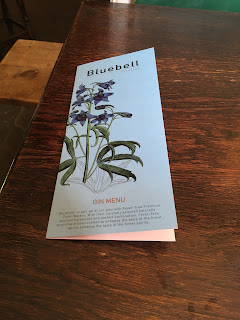 The barmaid had been friendly but scared me when she crept up behind me and shouted "I'll be with you in a sec!", some young posh walkers sat in a conservatory near the loos and squinted at the BRAPA logo in case it was something they were aware of, but all in all, it was a staging post for my bus.

At the bus stop, a cat was found, hurray! 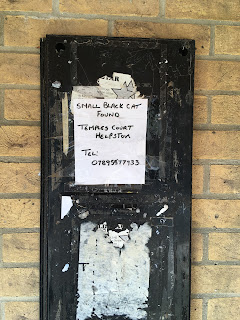 Werrington confused me, in the same way Stoke and Telford do.  How big was it?  Where was the centre?  Was it town, village, just a suburb of Peterborough?  Why did people keep recommending me pubs here?  Was this my destiny?  Would I ever get out alive?

I was in search of a pre-emptive micro I'd been recommended by FOUR different people already today, one of whom was a nice chap on Twitter called David who seemed to be doing an almost BRAPA-esque crawl in reverse, doing a great job of avoiding me.  He'd been in earlier and was now in Market Deeping's Vine Inn.  Maxey landlord had recommended it, think Gemma had too, and the bloke who had his snotty tissue eaten by the dog was a fan.

As I meandered through the mean streets of Werry to my next pub, it was facing me in a parade of 'shops' (derelict buildings), possibly the best pub frontage of 2018: 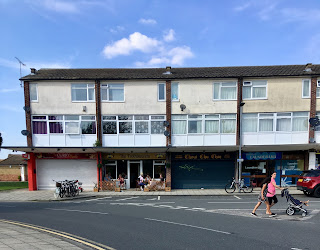 At the bar, I spied 'Phipps' which I recognised as one of those old fashioned breweries presumably closed years ago and revived recently.  As I politely declined that staple Micro question of 'do you want a taste of it?', I did my usual 'no, I'll go straight for a pint of it!'  His reply 'ahhh, drinking with your eyes then?' was a new one on me, surely he doesn't want every customer to sample every single beer and then make an informed decision based on the evidence provided!   Probably me being overly sensitive.  Anyway, like the pariah I was becoming, I sat alone on these former airline seats (very comfy, no table but ability to rest your pint glass) and decided this was a cut above your standard micro.  Average age, even by micro standards, was a particularly coffin dodgery 83.  It was carpetted throughout, unusual but it really worked and I wonder if the original micropub concept (Dr Phil's in Middlesbrough would be an example) is being altered for a slightly 'pubbier' feel as it is something I'm noticing more and more amongst the newer openers.  Mrs Froth brought bowls of crisps to each table, some got two if there were several people sat around, those outside were also catered for.  I looked expectantly up from my plane seat, but got none.  To rub it in, one old lady on a table picked one out of the bowl (they seemed more like crackers actually, the crisps, not the old ladies) held it up to the light, and whined "they're all broken!"  Ungrateful old bitch.  I'd have killed for a broken cheesy pentagon cracker.  But then a newbie bloke who obviously didn't know the pub drill wanders over having just bought his own Pipers crisps!  Epic fail, I was thinking, but it sparked conversation about various Pipers flavours that went on far too long.  Bloke he was talking to was wearing crocs (where did he think he was, Tiverton?) and drinking a hoppy pale out of a Bass glass, the absolute monster.  And yet, he was welcomed into the bosom of the pub.  So in conclusion, a great micro, very GBG worthy, but not my happiest luckiest experience today, had things gone a little bit better in terms of people & crackers, we could be looking at a micro of the year contender!

So where to next?  Well, not far away was the pub on the front cover of the 'Rhythm & Booze' magazine I'd been given twice, the Cock Inn.  Gemma reckoned it was ace, however mine host in Maxey seemed to suggest it was simply being lauded for 'reopening after a period of closure' and with phrases like 'shared dining experience', 'Heineken' and 'range of cocktails' I decided to give it a wide berth for now.

After all, you can't trust Twamra.  Just look at the 2019 GBG printing debacle I don't like to mention.  Hell, they've given Blue Bell in Belmesthorpe the Rutland pub of the season!  No, don't trust them.

Instead, I walked 20 mins to tried & tested GBG Werrington entry the Ploughman.  This was despite THREE different people sneering at it today, Gemma going as far as to describe it as 'the pub off Shameless'.  I could hardly wait, and that isn't even sarcasm.

On the football front, Hull City had been losing again at home to 'Frank Lampard's Derby County' (to give them their new full name, bit like Hull Tigers) but in a plane seat moment of psychic genius, whilst messaging Dad who was at the game, I caused us to equalise within a minute! 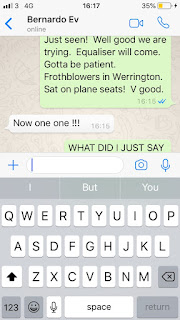 But psychic premonitions can work both ways.  In one of those weird little challenges I set for myself, I said if I could get to the Ploughman before the full time whistle blew, we'd grab a winner!

Then I got lost, circling a Tesco petrol station forecourt and some weird anonymous buildings.  Wandered around for 5 minutes, finally saw the pub looking very tucked away ..... 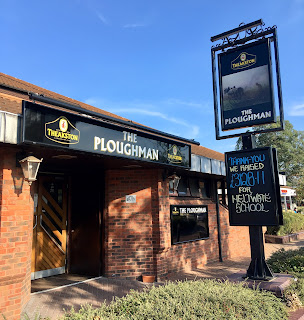 And could you believe it, my phone buzzed in my pocket, it was Dad saying "oh dear".  I checked, we'd lost 1-2 in injury time and the full time whistle had just blown.  All my fault.  The blackboard rubbed it in.

Can't fate be strange?  It would've been my Grandma's 96th birthday today, and I wondered if she was looking down having a bit of a joke with us!  She knew how useless Hull City were. Anyway, I wandered into this delightful dark little dive, almost WMC in feel, as I ordered a dark brown beer from Suffolk with about as much enthusiasm as one could muster under the circumstances.  Top quality, like I've always said, Twamra can ALWAYS be trusted to get it right(!)  I sat on bench seating as blokes watched Jeff Stelling reading out the final scores, and smuggled my prawn sandwich I'd had in my bag all day.  It smelt a bit strange, but truth be told, I was just fitting in with the locals in this respect!   Man City v Newcastle started and a man went to draw the curtain behind me, to stop the glare on the screen.  But this was just at the moment I'd gone in for the 'green highlighter tick'.  Oh well, it was apologies all round and landlord rushing over to me.  They turned the lights on for me, though I explained this wasn't going to be a long process but thanks anyway.  Of course, this led me to explain BRAPA and then landlord temporarily disappeared and returns with a copy of 'Rhythm and Booze'.  My THIRD copy today.  I tried to act surprised and full of excitement.  The football gang were all smiles, but soon it was time to focus on the game and just as in Whittlesey, Raheem Sterling (the least popular footballer in outer Cambridgeshire) got grief for being better for Man City than England.  I mentioned I was a Hull City fan and everyone looked disturbed on my behalf, so time to leave.  Somehow, a community style cracker, not that kind of cracker, the ale was great, KEEP IT IN THE GUIDE, IT DESERVES ITS PLACE! 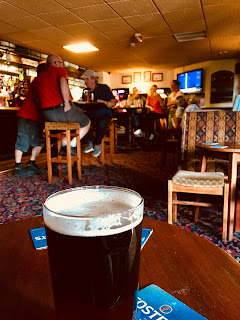 My sense of well being didn't last.  I'd been complacent, thinking buses back to Peterborough station must be really frequent and easy to get.  Maybe they were, but I couldn't find one at all direct and the clock was ticking.  In a panic, I finally rang a local taxi (shame cos I'd avoided them out in the sticks!) and though I had no idea where I was, I stood outside some pub I can't  remember and at the second time of asking, a bloke turned up and charged me £7 though my initial text said £4 hmmmm.

Just relieved to be back at the station, where I had to dodge drunken Doncaster fans on their way back to their slums after an away point(?) at the Posh.  Luckily and amazingly, they all got on a train 11 mins before mine and I was safe.

GBG wear and tear though, you can tell it is over a year old and I finally ripped a page in the big Ploughman hoo-hah pub tick curtain controversy: 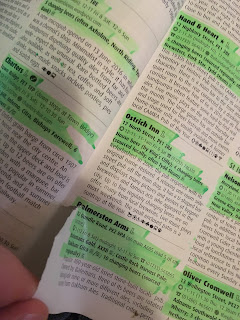 Back at home, just time for some late night balcony fish & chips before bed at the end of what had been a rather surprisingly wonderful day.