Anyone seen the new Good Beer Guide yet?  Anyone at all?  It isn't funny anymore!

As Martin "RM" "Retired Martin" Taylor put it in his post-punk apocalyptic classic 'The Ploughman of Werrington' "this has been the hardest two weeks of my life" and even if he was kidding, I'm not.

Stuck in limbo, praying for the letterbox drop no later than Friday 14th, all that remains is to go to my darkest place, Leeds.

I was born there, I work there, I'll probably die there.  But joking aside, if I am, it's a classic pubby city full of quirky friendly folk.  It is only the L**ds Utd football team I despise, and pub-wise I'd go as far as to say it is more likely to provide you with a heartening glow than a similar day in York, if like me, you are into 'people' more than 'ale' itself.

After all, it is home to legends like Richard Coldwell who several months ago tipped me off about the following pre-emptive.  I was going to wait to see if it appeared in the 2019 GBG and make it my first unofficial 'tick' (without breaking embargo, obviously) but in the current climate, I couldn't wait any longer.

It was a sunny breezy Friday evening after a tough-as-nails week at work and after hopping across to Burley Park, it was about 10 mins down the slope.


How had I never been here before was my first question, it was huge, looked glorious from the outside, and the Tetley's lamp of course is a stamp of approval for any pub in my recent experience: 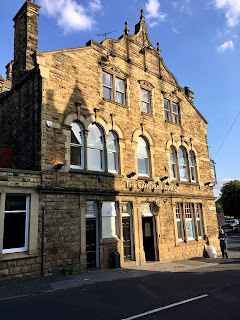 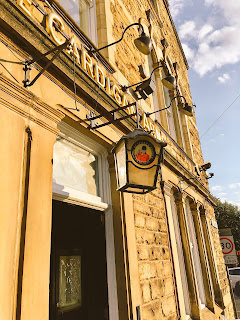 Inside, it was immediately apparent I was in somewhere special.  That central bar area with rooms off to all corners, frosted glass, mosaic floors, high ceilings, staircases, a bit like a larger Grove down Holbeck way, or Three Pigeons in Halifax, or the Swan in York, a bit like that Stork place in Birkenhead or probably several Lancs or West Midlands pubs I can't quite bring to mind.  At the bar, L**ds were playing Middlesbrough in a Friday night kick off and a man said he'd been offered free tickets, but still couldn't bring himself to go, another bloke commenting their good form probably won't last.  It was nice to hear this doubt and skepticism, rather than the usual bragging and 'champions of europe in 5 years' I have to endure at work.  I saw a bright room with a glinting Bass mirror, but it all seemed a bit too obvious so I went for an empty darker one, such a tough week I wasn't in sociable mood.  The ale was ace, Kirkstall brewery have taken this place on and they are one of my faves anyway, stuff like Three Swords, Dissolution, Black Band Porter, wow, I don't normally talk beer but you have to admire them.  I was almost asleep horizontal on the bench seating when a barmaid finally walked in to see if there were any empties or crisp packets to clear up!  I'd been so still, flies were circling me like they thought I was a corpse.  The menu even did a vegan option I sent my sister in case she wants to come here instead of some namby pamby cafe for her next feed.   Rarely for BRAPA, I went back up for a second pint.  Shocking to return to MY room and find two couples now inhabiting my space.  I nearly asked them to piss off but remembered it wasn't actually mine.  But that is what a pub this great can do to you! 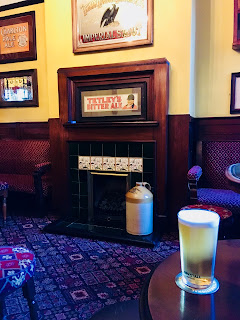 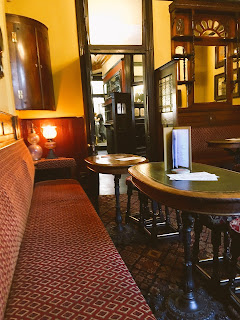 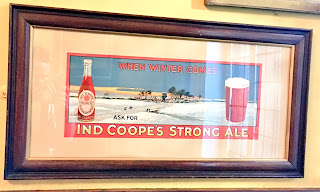 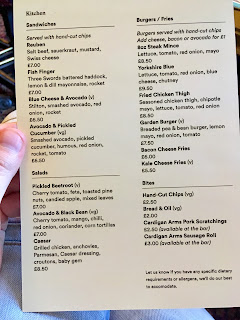 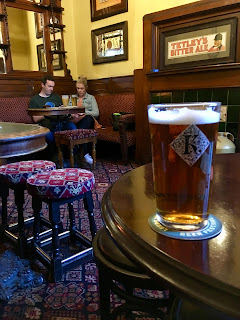 That Burley Park-York train journey takes forever, I'd probably have been better changing at L**ds but I missed the train and it was dark when I finally got back home, it really is nearly Autumn! 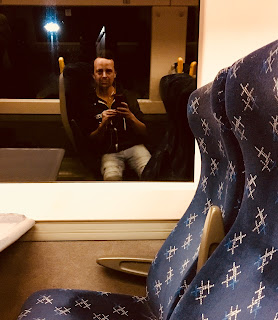 Fast forward to the following Tuesday night and I got into L**ds station after work to find ALL the trains back to York cancelled.  Trains have been appalling since June.  Still, a good opportunity to pop into the newly vamped 'White Rose' in the station.

Back in the day, I had many filthy pints of Davenports in there, but now it was called 'Beer House & Kitchen' so with a name like that, whatever it's shortcomings, I expected a range of ales to make a pre-emptive shout for future years ...... 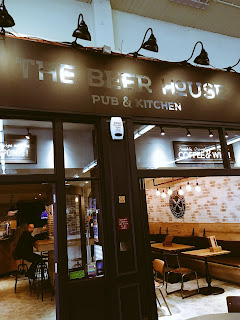 So I was quite surprised to see just the two beers on, Greene King IPA and Old Speckled Hen.  No Romford Pele (or Leeds equivalent, Thomas Brolin Bitter?)  That was the least I'd expected!  Oh well, a surly barmaid pulled me a Hen and the staff stared in disgust as a scruffy man shuffled around the room, hitting each fruit machine in the hope free money popped out, and then left making a weird squelching noise out of his mouth.  The other customers were either alcoholics or southern businessmen in pinstripe suits talking loudly into phones like it was the 80's or Dom Joly was making a comeback.  My beer was dreadful, not vinegar but left a horrible dryness in my gob, like it had cleaning fluid in it.  £4.40 a pint too.  FML!  The station Wetherspoons had never seemed so inviting.  I realised a train was running, I couldn't down this beer, but I tried, missed my train, and realised I'd left my £9.95 of Sainsburys shopping on the pub bench, so some scroat somewhere is enjoying Special K cereal bars, iced coffees, Bernard Matthews turkey breast and a bag of rocket leaves!  Oh, and the brickwork wallpaper was seriously tragic.  Even the Station Inn at Habrough was blushing. 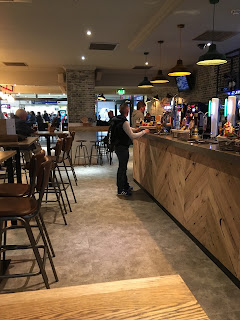 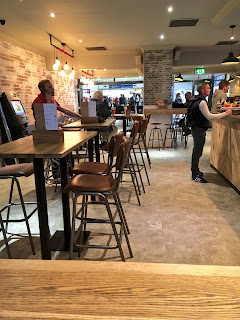 Fast forward now to Friday just gone, and I was thinking 'BRAPA succession planning'.  Who could take the helm when I am no more?

Well, look no further than my new work buddy Megan.  She nicked my good beer guide, commented on why I hadn't done more pub ticks in Devon (they all say that!), bemoaned the fact that in geography at school, she'd only learnt about earthquakes and not British places, and to top it off, told me she was getting bored of her usual tipple, pints of Carling.  A Wakefield lass you see.

So as part of a new Friday lunchtime venture, we decided to do a different ale pub to give her an intro to BRAPA and real ale life.  This was on the premise she first gave me my 'Heron Foods' debut, where I bought cottage cheese and a reusable carrier bag which cost nearly the same.

That's how to live!

We went to a place I'd been to before, but felt has a shot of GBG inclusion one year ..... 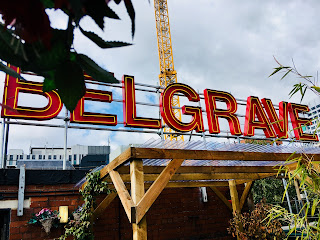 Yeh, CAMRA is lapping up this kind of place at the moment.  You walk in, everyone is under the age of 30, huge pizzas are being freshly made to your right, people sit on benches like they're in some kind of commune/soup kitchen/hostel, a range of expensive hoppy ales are on, plenty of crafty kegs, and the staff always ask you if you are 'staying in' (even if it is snowing like shit) because there is a  roof terrace and they give you it in plastic cups if so.  The first time I came here was to watch a punk gig, it's a top live music venue too, and that night, Cerebral Ballzy and OFF! were amazing.  Today, Megan's eyes strayed towards the lager pumps but our barmaid was a proper star, very engaging and helpful, so I asked her to give Megan a try of the keg Five Points Pale.  "Ugggh, too smoky" she says,  "you might mean hoppy" I beersplained to her like a twat.  I explain to the barmaid I'm trying to convert Megan to real ale and by coincidence, the barmaid tells us she's recently gone from lager to ale herself, but warns you have to do these things in stages!  And apparently, fruit beers are the way to start.  So a Peach Timmermans it was, I thought about trying to say something intelligent about lambic brewing styles I don't understand but no one likes a wise-arse so I kept quiet.  "We'll have ya on the stouts n porters by Christmas ho ho ho!" i said accidentally sounding like Santa, but the barmaid told me even she'd not reached that level yet!  Was a weird but great chat looking back.  Because Megan is always too hot (but often cold, or hungry), we went for the plastic glass roof terrace option, and felt like we were at some festival crossed between Blackpool and Ibiza.  And it wasn't just us.  The only other two up here, two middle aged ladies took out a selfie stick, put their shades on, took their jackets off, and started snapping away like they were pretending they were in a Spanish resort.  I told Megan this was classic BRAPA observation you've gotta 'capture' in these places.  Wasps (twasps) then started buzzing around and trying to hurt us, but this was a positive experience and proof if it is needed Belgrave has some serious potential for 2020 inclusion.


We've got a new pub in mind for this Friday with a 'special guest' who hates plastic packaging, so more on that when it happens, unless the 2019 GBG gives me something new and central to go at (like it did with Wapentake last year) but that's all for now.  I can't even plan my Saturday outing as things stand, never mind a Fri eve Greater Manc trip.

STOP PRESS - Official GBG release date TODAY Thursday 13th Sept, no paper copy yet but good news is the App (not the easiest thing to use since the upgrade) HAS been updated so at least I can 'search' for what pubs I need to do in a given area.  Fri evening trip to follow.....