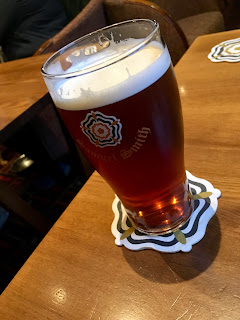 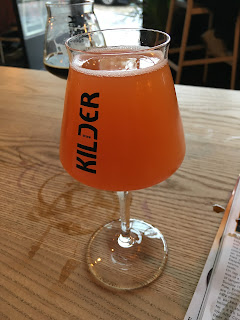 Friday evening and after the type of train delays us poor downtrodden Northerners have to come to expect from Northern and Transpennine, I was finally in Levenshulme, where I dodged litter and people looked at me with wide anxious eyes.  "Ey up, not another Irlam" I thought, but then again, that turned out better than okay in the end.

As I turned away from the centre past a nice park where twild-folk presumably frolic amongst the discarded syringes, things became more sedate and the people's expressions a bit more gentle.  Not that 'gentle' has ever been a word to describe a Sam Smiths boozer before.

Yes, this was my nightly 'pre-emptive tick', as recommended by two different North Western pub people over the past six months, for it had won an award, taking a leaf out of the unlikely book which is the Boar's Head in Stockport, that most magnificent SS pub. 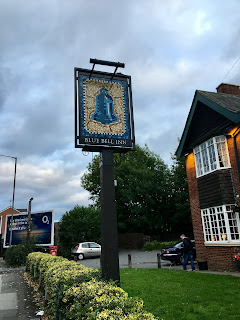 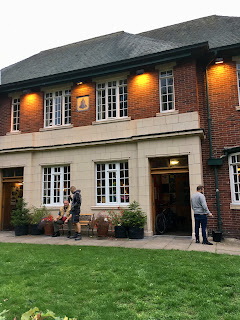 First thing that struck me as odd was actually a fairly sizeable pub car park.  I don't think I've ever seen a car park at a Sam Smith's before, cannot imagine anyone visits to be a 'designated driver', and certainly not in this one, as a bloke gargled "love ya jacket mate!" as I was wearing the one which made me look like a biker in the Isle of Man.  I couldn't quite make it out, but he said something like "would look good on me with mi dreads!" but I must've misheard as he was bald.  He friends laughed, perhaps a running Levenshulme joke.  It felt like that kind of town.  I thanked him and went in.  At the bar, the barmaid decided not to serve me, but to serve the shuffling strange little lady with moustache called Kerry, but I don't mind too much, regulars get preferential treatment and all that bollocks.  A much better barmaid stepped into the breach anyway, serving me quickly.  Bit of a panic as no hand pull in sight round in this edgy bar area,  but of course they knew what OBB was and £2 a pint was good.  It wasn't actually one of the better quality OBB's I've had, but perfectly drinkable.  I finally shimmied into the lounge area for several reasons, Mr Dread and mates were coming back in from their cigarettes and I didn't want more jacket chat, the lounge looked more welcoming, and I'd noticed from RM there was a pub cat, and you've gotta look them up where poss, or is that puss, haha!  Anyway, I soon found myself sat with a weird half Irish gang and because a dog was almost sat on my feet, I knew my cat chances had evaporated.  The main chat seemed to be the drunkest loudest bloke saying cancer sufferers weren't brave, they just had to deal with it.  A cancer survivor woman said she'd thought of herself as brave, he said she definitely wasn't, even if she'd died,  and it got a bit tense.  "I bet you're glad you sat here(!)" said the other lady sarcastically and I chortled, but I was of course, perfect blog material, as I feigned 'important reading'.  The gang dispersed, told me I might get free cake if I sat here long enough, but I didn't so I didn't.  End of story.


As I strolled back down towards the station where the GBG listed pub was, I couldn't help thinking how sad it is more Sam Smith's pubs aren't in the Good Beer Guide, I think it is not much more than half a dozen.  And much as I'd enjoyed the Blue Bell, I could think of three in York which all deserve to be just as much, yet sadly I guess York Twamra are perhaps not that way inclined.

Anyway, no time to dwell on Sam Smithy issues when a micropub is lurking .....

It's probably just me but I couldn't stop thinking of Dominoes Pizza when I saw that sign.  I wandered in to the thriving Friday night echoey environs where micro bar blockers were making joking comments and being a bit twitchy.  I saw one of those 'too good to be true gaps', you know what I mean, where you want to edge in to get served, but because there is a stool, half a pint, some tab papers and a bit of change, you know someone's gonna come back to claim the space just as you are concentrating.  So I was all apologies when a smiley ginger beardo nudged me from behind, but he and the girl he was with, plus the barman all told me in a roundabout way that they didn't own the space, I should push in, and get mi sen a pint, which under the circs, made them the nicest bar blockers of 2018.  My babbling social commentary of bar blockers fell on deaf ears, and soon as I was by the front door nursing a pint of something non-OBB.  Micropubs usually fit into one of two categories, boring as fuck or quirky as shit, and this thankfully was the latter, despite the gin menu giving me fevertree dreams before I'd got comfortable.  Speaking of which, a group of scousers including a nice old man in fetching red cords discussed the Jack the Ripper case for two minutes.  "He was part of the government!" they concluded, me sitting there amazed they hadn't pinned it on South Yorkshire police.  Now I knew I was going to hell, it was time to explore.  A haunted coffee lounge and balcony upstairs, hidden basement bar and loos downstairs, there was more than meets the eye here.  Right behind me, I'd spied a sign contrary to usual pub experience.  It actually encouraged folk to come in to use the loos!   First, a moody old blonde woman who scowled at me on way out after a 10 minute sesh on the bog.  The second blonde lady utilised the rule better, leaning over the bar and giving the landlord a kiss on the lips before making her way down to the basement bogs.  A  third blonde lady (hooped earrings) didn't use the bogs at all, but turned her chair round and stared at me face on for 5 mins.  To prove I wasn't intimidated, I ran past her and got another half, staff lovely folk, and all in all, a quirky positive micropub experience.

So that was Friday night.  No time to waste.  Had to shoot back home to York pronto, as was on the 07:44 to Brum tomorrow morning.  Phew!  This pub life never stops.