Trying to 'tick off' pubs in specific counties in some kind of order doesn't always work.  Sometimes you find yourself looking at a pub on a county boundary (the Blue Bell in Maxey, Cambridgeshire for example), and before you know it, your eyes are straying into dark forbidden lands you hadn't previously considered visiting on your sunny Saturday trip.

And lands don't get any more dark and forbidden than Lincolnshire, which came into view as I searched for an early opener on the outskirts of Peterborough.   Soon I was shooting up the A15 quicker than a junkie with a John Wayne fascination, the bus dropping me in the bustling little town of Bourne just before 11am. 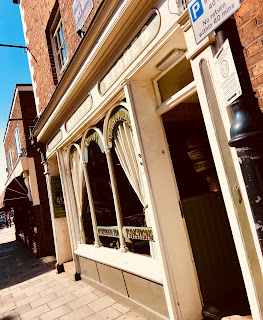 The pub was trading off that 'Stores' style image that some places tend to go for, which I never quite understand.  Is it supposed to be an old fashioned English village shop, or something altogether more American?  It often leads to a quite flouncy pub experience, and there were early warning signs here as two well attired tanned ladies with plummy voices were ordering a painfully complex breakfast of waffles with syrup and smoked salmon, which if really all on the same plate was pretty disgusting.  I ordered a pint of some peachy thing from Beartown, which seemed fitting as this place had a semi-Congleton air about it.  The posh bit.  As I turned around, people were guffawing into plates of smashed avocado so I went through to the back, not the charming garden with the pretty flowers, but the dark middle bit where a member of staff was laying out freshly cleaned beer towels.  I've never seen a clean beer towel in all my 2,222 pub experiences, so this was something of a novelty.  I was once given a Tetley one to dry myself off in Morecambe, and even then I wasn't allowed to keep it, but that is a tale for another day.  The 'stores' decor was quite strong in this darker part of the building, and with things like Bass and Inde Coope signs, it was like they were trying to compete with my amazing Cardigan Arms experience in L**ds the previous night.  I'd accidentally sat alongside the pub keys and luckily, they were swiped away to stop me feeling like a criminal in the making, as I phoned home to predict Hull City 1-3 Derby.  The feeling I was in the 'staff' area intensified when beer towel lady and a hard working young bloke sat down and had full English breakfasts in my right ear 'ole.  A pub I perhaps wouldn't expect to enjoy, but it certainly had plenty to commend it. 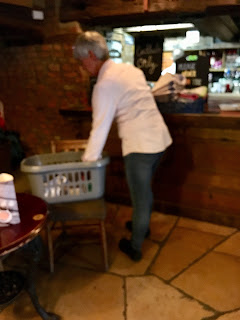 Beer towel lady smiled and mouthed goodbye, though I was grimacing as I'd walked all around this pub looking for the toilets, but no idea.  If anyone reading this remembers where they are, please put my out of my misery!

As that old country and western anthem goes, 'I crossed my legs til Market Deeping' where the bus stopped, tantalisingly close to Cambridgeshire but not close enough to stop it being in Lincolnshire.

It was 11:55am (a noon opener) so I wandered up and down the street to stop me looking too much of an alcoholic, but just at that moment, two ole' codgers walked in, unless I'd seen a mirage!  Time to investigate. 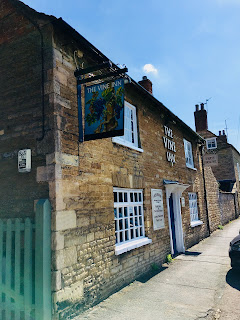 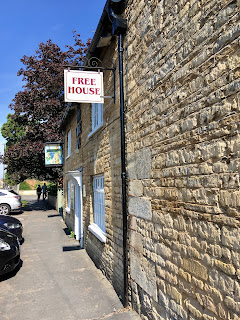 And loud laughing voices from beyond (door, not grave) confirmed my thoughts, open early, ready for business!  Hurrah!  And that is where the fun started, as the two old blokes made jokey comments to put me at ease (sort of) and then our sparky livewire barmaid asked me what I was doing here and if I was going on TripAdvisor, her name was Gemma!  But we all know a BRAPA pub review is a more sound and sane (probably) version of events than those people who judge a place on whether their kids were bored, the desserts were vegan or how the staff handle requests for an extra sausage or three.  Speaking of which, the loos had an interesting line in 50 Shades of Grey (& sequel) appreciation, with quotes all over the walls.  But this was a proper pub, a drinkers pub.  True, aesthetically it perhaps didn't have that traditional feel of the next place I'd visit, in places, decor more neutral than a Coldplay gig in Switzerland, but the locals, 5.2% ale, friendliness and effortless atmosphere were a rare joy to behold.  Under the circs, I let Gemma tick the GBG.  "Do you always let people highlight the pub or just the special ones?" she asked.  The latter of course, I said,  deciding not to mention the two alcoholics in Aberdeen Wetherspoons who once refused me on the grounds I was somehow trying to get THEM to do MY work.  "It's a bit like Man vs Food what you do, but with beer" said Gemma, before an old guy with dark glasses called Ken wandered in and dispatched a load of old thriller novels.  I'd been banging on about getting a taxi to Maxey, but after three failed attempts ('we only do airports'. 'it'll be an hour and a half' and one that simply went to voicemail), I decided to man-up and walk it.  After all, my knee I don't like to talk about is almost fully healed. 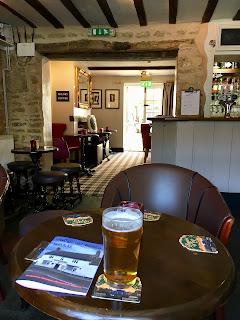 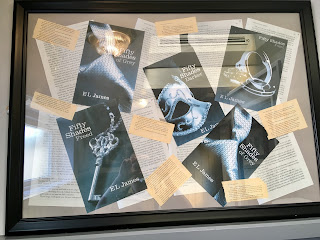 The walk wasn't as bad as I expected, managed to get off the main road for the most part and the grass verges were about walkable when a car flew past me on the Maxey Road. 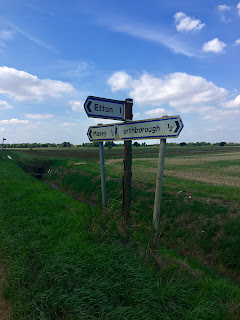 When this sign only said half a mile, I was relieved as was expecting double that.  Once in the village, it was immediately obvious I was back in Cambridgeshire as three bearded topless young men in a driveway wished me a cheery 'hello' and chewed on bits of dry grass, whilst the most hipster looking dog ever and a nervous blonde girl sat on the ground looking nervous.

The pub soon came into view and I could finally get a Cambs pub ticked off, the true aim of today! 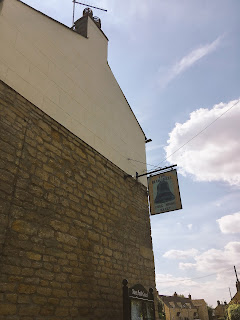 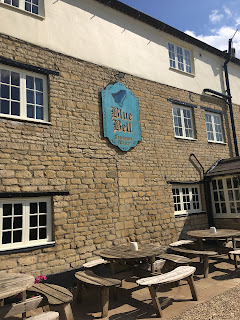 First impressions weren't the best in here as I stood awkwardly at the bar, zero bar staff in sight, for probably a good 5-10 minutes.  "I'm sure he won't be long" said a stern looking local apologetically.  As time went on, he started to get agitated on my behalf, his admirable beer belly moving in and out at shorter sharper intervals.  The locals started talking about my presence as though I wasn't here!  "Funny if he just wants a glass of water."  "Yeh, or directions - haha".  Finally a barman appeared, threw a piece of equipment by my feet, exclaimed "GAS EMERGENCY!  FIXED IT"  and served me, and I disappointed all by ordering a pint of Bishop's Farewell from Oakham.  "Bishop's?" said barman, as locals looked confused, as though no one had ever used the 'Farewell' suffix for this beer ever before in history!    Finally I could sit down, wipe the sweat off my brow, enjoy my glorious pint (they had lots of handpulls, nearly all over 4.5%) and the superb old surroundings I'd not realised I was part of, weird stuffed creatures, a man and his dog, one called Terry, the other Billy.  Not sure which was which, but starving dog pulled a snotty tissue out of owners pocket and ate it, uggghh!  Then the landlord brought the most enormous bottle of blackcurrant cordial from the cellar ever, surely a nod to Tom Irvin's absence from today's adventures.  Loving this place more and more, landlord asked if I was doing my homework, as I ticked the GBG.  This has only happened before once, at the Steamboat in South Shields, a similar classic.  I explained BRAPA and he and dog owner were all 'pre-emptive ideas', 'local geography' and the like.  When I explained the predicament re 2019 GBG printing debacle, he nods and says "aye, well there won't be much movement on the pubs around here" which was of great comfort to me!  And I got another copy of the newly published 'rhythm and booze' CAMRA mag.  This place was a superb example of village pub life. 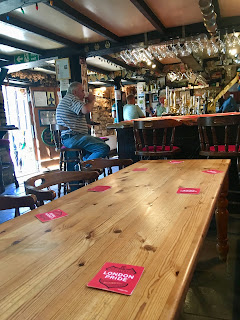 Time for my next move.  Next bus was too long a wait.  I didn't want a taxi.  There wasn't a GBG pub within walking distance?  What would I do?  Edge of seat stuff?  No, really.

Find out in Part Two.