BRAPA - Cometh the Stour, Cometh the Pubman : Part Two (Never Trust a Pub by it's Sign)

Halfway through the day, and there was no way that me or Dad and his Plantagenitis fancied the half an hour walk back from Amblecote to Stourbridge, especially as the rain was now tipping it down in a more tippy manner than Tippy Hedren going on a tour of Tipton.

Here's our bus tickets, we loved them at the time: 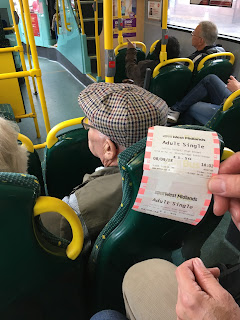 And special thanks to the couple in front who returned a tenner which fell out of my pocket as we got off the bus.

Squinting through the rain, our next pub had a sign which made us both think it was going to be dire:

But if the Barbridge and the two pubs in Amblecote had slightly failed to capture that true magical of nature of what makes West Midlands boozers so great, then this one achieved it in droves!  It all started with a friendly welcome from the barmaid, it was 14:14 and I made a comment "it sounds like we've been drinking all day!" in relation to something Dad had said.  "Some people do!" said the barmaid, and I acted 'genuinely' shocked at these monsters as she told me some start at 9am, though when we sat down, I conveniently remembered within a second we'd been drinking at 9:01am at the Draughtsman Doncaster a few weeks ago, and at 12:20am in Leeds station Wetherspoons even more recently.  Dad's eyes were glazed and staring into the middle distance, well the bar area, I thought he was eyeing up the barmaid, but turned out he'd seen his fave pub food 'filled rolls' or 'cobs' as the strange woodland Midland folk call them.  I always wonder if they get corn on the cob, are they disappointed by the lack of bready goodness?  Cheese n Onion is the perfect option with a gorgeous standard pint of Brummie muck in my opinion, and soon we were wolfing them down.  The pub, to a man (and woman) was totally friendly, though perhaps not a man to the left of the bar who was obviously the 'gaffer' enjoying some down time with a 'don't you dare disturb me' expression, and who can blame him, though a bit of a shame as we gently dared each other to ask how can such a great pub have such a crap pub sign?  And our seat, despite being bench seating, was nicely encased in a wooden panelly area to give it an element of privacy.  A pub that had everything, superb! 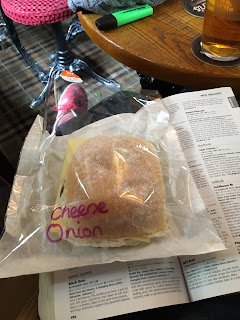 Next we had a little bit of a walk up a road near some green leafy bits to get to what might prove to be my final 'tick' of the 2018 GBG, not that I'm pressuring the TWAMRA Printing Press Privilege Haters to get their revitalised little arses into gear or anything .........

And if the Waggon & Horses was a step in the right direction, we achieved 'peak' West Midlands pub scene here.  Exactly as you'd picture a basic boozer in your mind's eye.  Bathams Mild or Bathams Bitter, that is your choice, cheap as chips, we got one of each, one a slightly darker shade of brown than the other.  If you come in winter, you get XXX, the continental choice.  Old men lined the walls, chatting gently and laughing, like ghosts from a previous age.  It was like the pub totally disarmed me, my ability to observe, take notes, even get pictures to do the place justice all just seemed to take a back seat.  Nothing seemed to matter apart from being in the moment and enjoying the beer.  I both love it and hate it when that happens!  Though I guess the alcohol was kicking in by now.  The loos were outside, always a top sign, and everyone said hello, or whatever the Brummie/Black Country equivalent is, it sounded a bit like "Arrghahaaryoww!"  Ask EL, he'll know.  But it was nice.  And if it does end up being the last time I take the green highlighter pen to a pub in the 2018 Good Beer Guide, it was a fitting way to end an epic 2017/18 season. 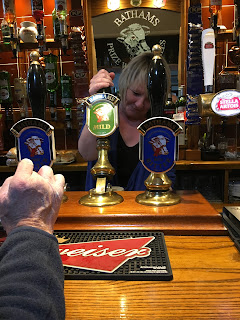 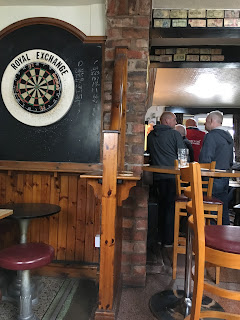 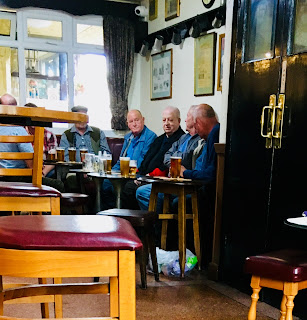 As someone once said, now for something totally different .....

The conundrum was 'should we do one more pub in Stourbridge, or get back to the centre of Brum and get in one of the two pre-emptives in a CAMRA mag we'd nabbed?

The latter bet seemed to be safer, and Dad assured me that this pub wouldn't have GBG staying power ..... so we'll hold him to that!


Whilst I had a 'power nap' (i.e. zonked out from too much Bathams) Dad continued his research so that when we got there, he knew EXACTLY what he was doing...... 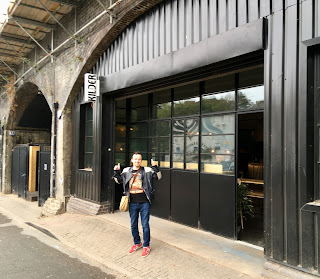 So just behind Moor Street station built into a railway arch (of course), was this modern benchy pret a manger style place full of crafty love.  Our hipstery barman was in for a shock, as Dad strode confidently up to the bar and asked for two pints of 'CBS'.  Barman, open mouthed, 'you....you...you mean the Canadian Breakfast Stout .... we ..... errrm, it's, errrm not on!'  Oh dear, said Dad, looking as disappointed as a 23 year old beardo who's realised he's left the house with no socks on and had woken up with a Jackson Pollock painting back tattoo.  Long story short, they had a Burning Soul Breakfast Stout.  "Well, I guess it'll have to do" mused Dad and soon we were sat on some pile-giving wooden bench supping the stuff out of those weird glasses.  Royal Exchange to Kilder, is like going from the Sahara to the Arctic Circle in 5 minutes!   The place, to give credit where it's due, had a warmth and relaxed atmosphere you may not expect, beer quality and the clientele were mainly young and shambled around like they were groping around for their calling in life, you know the type who probably could tell you all about quantum physics but have no idea how much a pint of milk costs.  Others spoke sternly about shared beers like lovers buying their first property together.  I went back up for a Grapefruit beer, under 3% and gorgeous, well if you like grapefruit more than beer.  Refreshing.  I should probably pop it on Untappd for the likes,  but no time for that, back to York!

And there we go.  All up to date blog-wise unless you count recent L**ds pre-emptives which is going to become more of a 'thing' in the coming months I hope.  More on that tomorrow if I write that up.   The GBG can't be far away now.......