So, Sunday 16th September, the BRAPA parents had flown off to Toronto (that has no bearing on this blog), my sister was doing the kind of things vegans do, and I was down in t'London, where I'd be working Mon-Wed in Piccadilly Circus on the 'Calypso Project' which I'm sure you're all fans of.

It made sense to me to come down a day earlier, whip in six daytime pub ticks, get back to my hotel, and get all rested and sober and get up a hell of a lot later than if I was setting off from York on Monday morning on the 7:01 train.

I should point out at this stage, I hadn't finished the 'cross ticking' of course, so still no numbers. 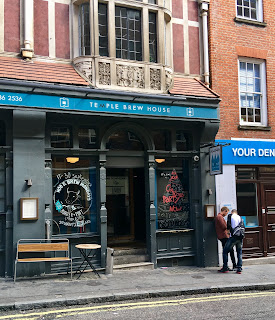 Down some steps into a cosy modern bar, where an attentive barmaid on a laptop doing important barmaid stuff jumped up to race behind the bar and serve me.  I ordered a 'Very Pale Ale' by Essex Street brewery, an easy starter I thought, but it didn't need a GBG brewery section to tell me the tasting notes should read 'wishy washy'.  Not particularly well kept, I thought, and over £4, welcome back to London!  Still, a nice place though I did need an emergency beermat, and an Aussie bloke (we were next to their embassy) dominated the atmosphere with his chat.  He told a story about a friend who'd been bitten by a tick, not a pub tick, haha, he then used the term "uber academics", reminded us he'd done a gap year in Japan .... "it was the best time of my life, very hard, but I made it work" he told his friends.  Even though burgers came for them that were taller than pint glasses, it still didn't simmer him down, and it was a rant about the mental health of students after that.  I took my glass back and said thanks through gritted teeth, had a wee in bogs that smelt like East Asian tea leaves, and on my way out, barmaid says "thanks for that!" and i'm like 'huh, what?  Having a piss?'  Upstairs, I nearly collided with the cyclists of 'Bob's Bikes Beer Crawl' and wondered if these were rival pub tickers, after all, Duncan Mackay had already beaten me to this place! 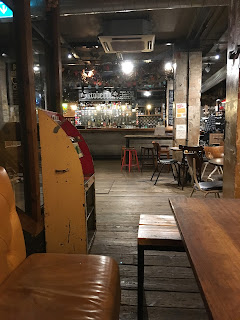 Just across Holborn around the corner from my Travelodge (I had to pay for my accommodation tonight, boo!) was another tick I needed in the Centre of London.  I'd timed it nicely, 2:20pm, and I could check in at 3pm.

An American tourist couple looked scandalised as they saw me taking the below pic as if to say 'there are better sights in London you know' or 'gee whizz, it's one of those gosh darn pub tickerrrs the Southworth bros tell us about'....... Best reaction since I took the 'Spoons shot in St Ives, or every time I go to Stalybridge. 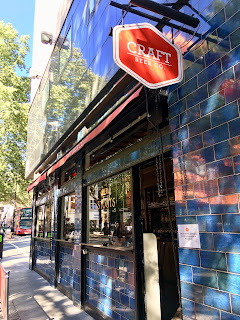 I've been to a few Craft Beer Co's before, Brighton, Farringdon, Pentonville, to name three, and I can't say it's a chain that has me wetting my knickers with excitement but I was impressed with this place in a low-key way.  As I paid for a Lancastrian red ale with actual cash, the bearded barman looked at me like I was some mutant, even asking me what strength the ale was so he knew what to charge me!  Do I lie?  I didn't, I wasn't in Hyde now.   But he had bigger fish to fry as a demanding little Spaniard in a  baseball cap at the bar (a common theme of my London pub ticking).  Best quality pint of the day?  It was up there.  Downstairs, there was a surprising quiet long dark cool sweeping room, a shame as I'd been perched at a stool in the window like a Yorkshire gargoyle.   Two young sockless hipsters sat beside me .... "You can get protein that is non dairy" said one to the other. "Woah, really?"  Now that's the kind of pub chat you don't get in Burnley. 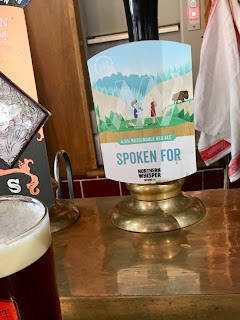 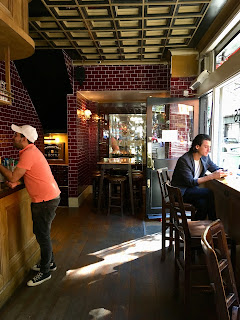 After checking in at my gin soaked Drury Lane lodgings, I got the Central line out to East London, Bethnal Green to be precise, where I had 3 pubs to tick off. 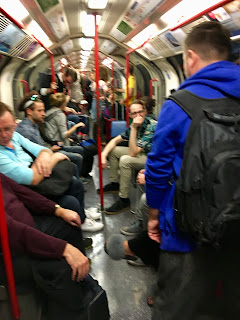 Bethnal Green seemed a peaceful trendy kind of a place on a Sunday afternoon, not the skinhead mean streets Green Street type area I'd been expecting.  All three pubs had been in the 2018 GBG so I hoped they were good solid ticks to get. 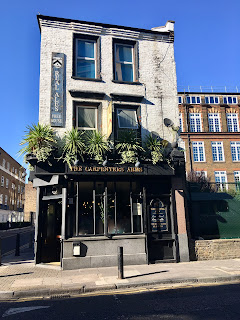 A pub so 'woke' (or awake), the theme here was my failure to get decent sly photographs of pubby happenings without everyone being highly suspicious of me.  It all started when our ginger barmaid, with a pleasant wide-eyed expression (think a gecko with better skin, wearing a retro Tintin t-shirt .... 'Red Sea Sharks' if you want the title) pulled a pint of 'okay' Tim Taylor Landlord whilst soft piano jazzy music played in the background.  With her rhythmic thrusts of the handpump (Madonna never made TT Landlord this sensual), I felt like I was David Duchovny in an episode of Ch 5 classic Red Shoe Diaries, which sounds a bit like Red Sea Sharks with less Nazi leanings (he had a little dog too).  (What am I waffling for?  I've got about 30 London pub reviews to write for heaven's sake!)  As two hipsters drank murky beer, framed by the outside graffiti, I thought this was peak East London, but they saw my photography and I had to give them the thumbs up and leave a blog card.  Two old blokes came in and I thought 'ah, PubMen' but they ordered a glass of red wine and a pint of Vedett.  It doesn't happen in Pontefract.  I read the Kray twins once ran this pub, hard to believe in 2018! 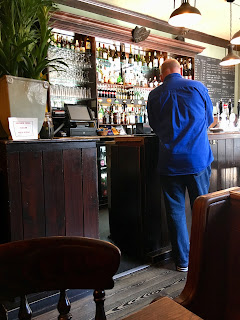 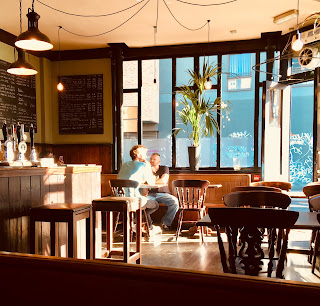 Just down the road back past the tube station and beyond, I came to my second of three Bethnal Green pubs in the 2019 GBG. 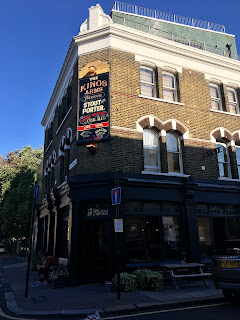 I'd seen plenty of signs advertising London fashion week back in the city, so all these loose hanging dungarees, flowery vintage patchwork quilt dresses and chunky chequered shirts worn with flat caps should perhaps not have come as such a surprise, but it meant I had to wear my camouflage new BRAPA shirt (making it's debut today) with a bluff swagger as if to say 'I'll be 'on trend' in 2019, believe me'.  Where were the handpumps?  That was a bigger concern.  But this place was too cool to follow fusty old pub convention like this, so a beer menu on a woodchip clipboard was presented to me (even though there was a sign on the wall) and soon I was drinking a warm Ikley Mary Jane, which although under £4 a pint rarely during my London spree, tasted more like Harry Kane's undies, I wrote at the time.  Still, my THIRD Northern ale in a row, had I become one of these twats who go to Malaga and head straight for the British Pub where they ordered Sausage, Beans and Chips?  The loos were down a steep narrow staircase.  A transgender person walked into the pub.  A lady with a headscarf said something about 'art', then I was trapped into my seat by a buggy..  "This pub was so modern day London", I wrote on Twitter on the day, "it was like a 2018 Chas n Dave with just as much rabbit".  Six days later, Chas was dead and the BRAPA curse had struck again, just as it did for Leslie Grantham in Cornwall back in July.  Gertcha. 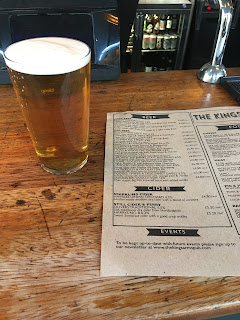 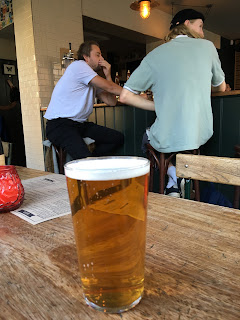 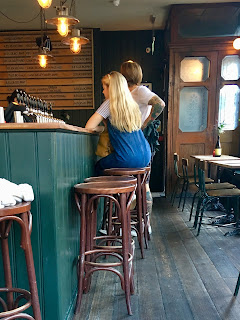 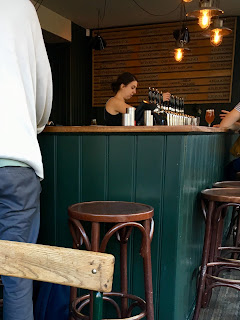 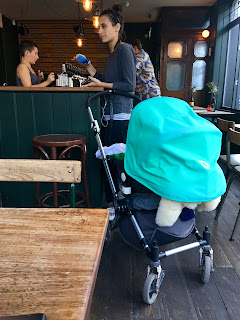 If Bethnal Green had been lacking a bit of life on this sleepy Sunday afternoon, then it all to be found in my last pub in town, and as we know, a street corner location and 'amusing' blackboard often signify that interesting times lay ahead ..... 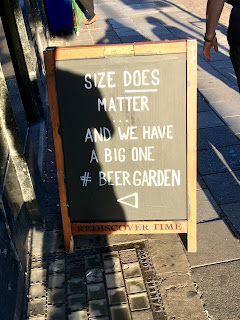 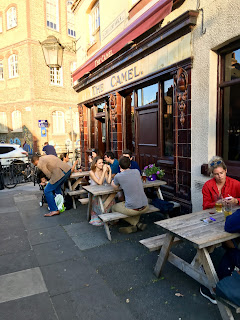 Oh yes, all life was here, well young people and tourists anyway, as I squeezed into the busy one roomed bar and for some stupid reason, stood behind a pillar next to some complimentary water jugs (we must be responsible and keep ourselves hydrated, right?) so even a three foot tall Japanese girl managed to muscle me out of the 'being served' scene.  There was so much going on, I actually didn't mind the wait.  I'd already witnessed a man strangling a twild (see above photo) and left a  'BRAPA' card in front of the Brewdog one cos I think we all know who is the true pub punk.  A cool Lancastrian dude ponced around in a funny t-shirt, and a couple ordered pie n peas with an air of pretension which made them look ridiculous.  Pie & Peas is fun food, not something to order with a stick up yer ass.   The pub smelt more appetising than any BRAPA tick I can remember since I went to the Central in Gateshead.  So hungry.  My ale, when it FINALLY came my way, was an amazing quality Adnams guest, Two Bays, my tasting notes at the time 'holy fuck, what a beer, shame about the adnams glass ffs'.  What insight!  I'm basically half man, half beer cicerone.  A randy old bloke asked a barmaid how old she was.  '19, going on 20' she replied.  Jeez, I'd have said 35 easy.  Still, a frenetic pub bound to put years on you, but easily the best of the three visited today. 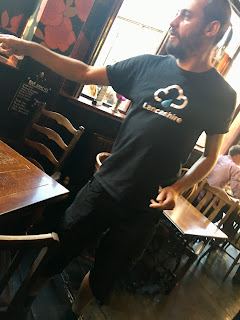 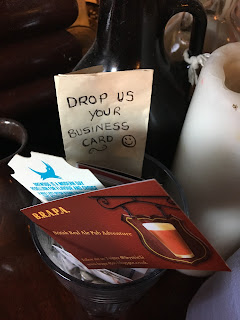 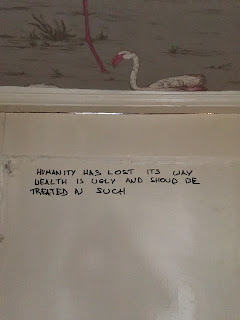 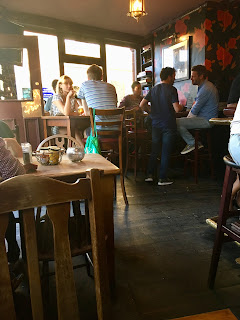 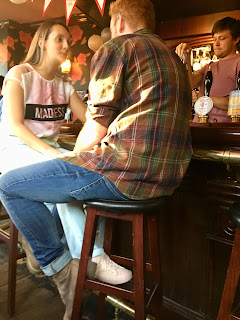 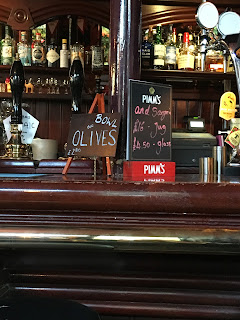 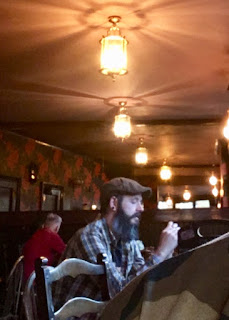 In much better spirits by the time I left Bethnal Green, I could still afford myself one final 'tick' on the way back to Holborn, and there was an E1 entry I'd not seen in the Guide before, and as soon as I saw it, I just knew it was going to be amazing.

I've read so many books about the Jack the Ripper case, I always love the thrill of pub ticking in this part of the world.  True, it is usually a let down, the terminal borefest which is the Frown and Shittle (Crown & Shuttle) springs to mind and you can never get a sense of the history, of that not so golden age, but here, you could imagine rubbing shoulders (or something more!) with those poor women.  The bar top was beautifully green tiled, it had floor mosaics, wooden floors, stained glass and the like.  My ale was good, and granted, the clientele were exactly what you'd expect from E1 in these modern times, but no one had a brown leather bag of surgical implements that I could fathom out, and in the dim candlelight and six pint glow, I just relaxed into my pint and didn't feel the need to make any notes, be too adventurous with photos, almost like a normal no pressure pub situation! 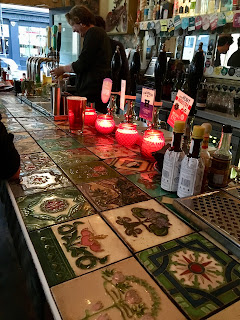 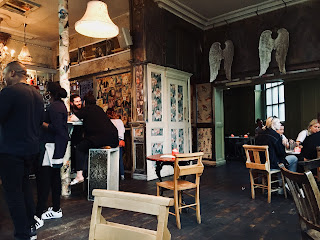 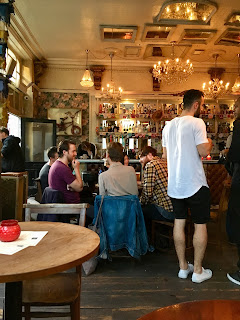 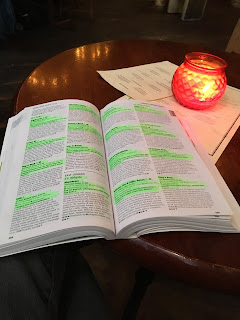 And back in my Travelodge for 7:30pm with some grub, all ready to get myself rested for the start of Calypso project mayhem the following day!