BRAPA - Part One - Cometh the Stour, Cometh the Pubman : An Amble up to Amblecote.


I knew we'd arrived in the West Midlands, when on our New St-Stourbridge train, we suddenly heard a man shriek into his phone "Alroite Warwick mate!" (even the people are named after local towns) and proceeded to sell him knock-off gold leaf tobacco, before saying he was off to meet Gordon in Bewdley.  It was the playful kick in the lower gornals the morning had been crying out for.

Once we reached Stourbridge 'Junction', we had to get this mini little train/tram thing to 'Town' which was nearer the pubs though I had a bit of a meltdown when my ticket went missing but never mind.

Time for an early opener before the half an hour walk to Amblecote as it had only just gone 11am, oooh go on then ......

Whoever came up with the modern rocky cool pub concept for this place can be proud in that they've seemingly followed through a very distinct blueprint to the nth degree.  You had an old jukebox.  You had crazy spray painted toilets, including luminous pink old beer kegs being used as urinals.  Batman and Robin 60's comic strips.  Soap dispensed from an old Jack Daniels bottle.   Band posters.  Cinema seats and other mismatched vintage style furniture.  The real ales of course, not on the bar, that'd be boring, but on the wall behind (I saw the ciders and keg beers but had to ask where the cask was, partly cos I'm blind - he wore a flat cap and swaggered).  Pubs like this aren't unique to the Good Beer Guide anymore, and it wasn't rubbish, it just felt so carefully stage managed as to be artificial.  And the fact that everyone in the pub apart from us was a moody old man propping up the bar shows that despite all your best intentions to create a certain 'vibe', there's no accounting for who your pub may attract.  My 5% Oakham was very good, but Dad never removed his jacket, which we've joked for the past 18 years is a sure sign of a less than enjoyable pub experience. 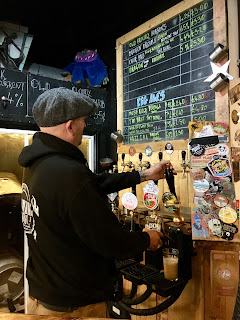 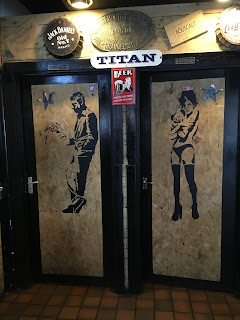 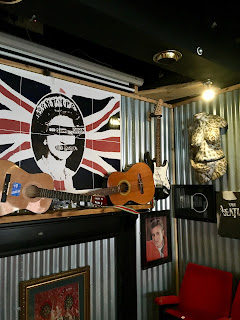 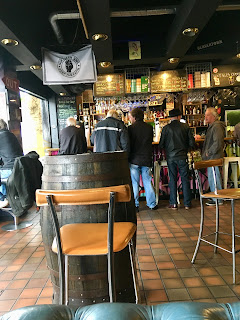 So now on to the tricky part of the day, nice to get it done early of course.  It was approaching 12 noon when I told Dad that rather than staying in Stourbridge for an easy day, I wanted to walk 30 minutes to Amblecote.  We could've got a bus.  Dad has this 'underneath of the foot' illness (self diagnosed of course, bit like my knee I never talked about) called Plantagenetitis, which makes it sound like he hates Edward I (if he was one) or something.

Anyway, after a bit of grumbling and with sweat on our brows, we reached the furthest of our two pubs.

One of those 'do you turn left or right?' choices (you couldn't go forwards into the 'off sales' without ending up behind the bar) so as BRAPA 2018 rules decree, we turned left for the lounge.  The first thing that struck me was the smell, the 1960's.  I was never there but I'm sure it smelt like this, and it was great.  A boremaid (bored barmaid, new term) who was sat on a low chair seemed amazed to see two customers (the pub was deserted) and jumped up to serve us.  I got an 'anagram' beer from Moles called Elmos, are anagram beers a thing?  They are now.  With Dad a bit unsure what to order, she offered tasters.  Still scarred from my Frothblowers Werrington experience, I told her I never have them because even if I did and didn't like it, I'd feel rude saying "ugh, gimme summat else quick!" but she assured me this was standard practice amongst her regulars, laughed, called me 'my lovely' and went to sit back on her low chair.  The pub suffered throughout from the absolute dearth of customers, we could imagine what a lively brilliant place it could feel on a Friday evening.  The main feature of the room was a peculiar room divide, which Dad said was the 'height' of sophistication in the 1960's. whereby you'd knock through a wall to make one big room, then semi-admit your mistake and put a see through divide in it's place so nosy fishwives knew what was going on throughout the whole building!  Nowadays, it was used to hang pump clips.    Dad then delved into his bag and said he had a 'special treat' for me, Happy Shopper Shortbread!  Then we spent a ridiculous amount of time talking beer 'taste-hooks' with shortbread which made me think we should be interviewed for 'Beer' magazine if it still exists.  And that was it, nice pub which should've been even better.

Just around the corner and down the hill we'd come from was the other Amblecote tick.  It was called the Robin Hood.  Dad is watching the old series on DVD, so he had to do the pose! 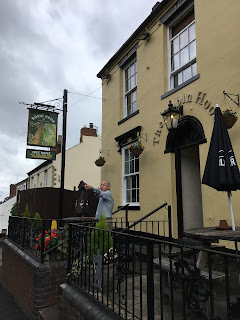 If the Swan was notable for the total lack of customers, we could hardly open the door for oldies with name badges milling in the bar area!  So this is who'd been stealing the Swan's custom.  As we squeezed in at the bar, Dad didn't even have to ask, Titanic Plum Porter was on, and I'd been crying out for it since my Greyhound in Hartshill faux-pas a few weeks back.  The barmaid (not boremaid or PISS) seemed a good sort, so I asked her what all this chaos was in aid of.  I couldn't hear her twice for the codger cacophony, but turned out it was a School Reunion, with capital 'S' and 'R'.  I'd thought she said 'Selby Union' so could've been worse.  They all must've been at least mid 70's, the name badges I guess cos they would no longer recognise each other.  We edged to the back of the pub, Dad giving a great commentary on social situations meaning people hang around the bar and don't spread out, he put it better than I ever could, but it all equates to something the legendary Tom Irvin once said, which was "what these people don't realise is that they're all idiots".  Dad had actually been convinced we'd walked into a 'speed dating' session, and when he pointed this out to the barmaid, she was like 'yes I can understand why you thought that' which I honestly didn't get!  Anyway, a nice pub probably not seen at it's best for opposite reasons to the Swan, great pint of course, amusing watching people tottering around having awkward conversations.  And Dad gave me food for thought, 'how would I adapt BRAPA to either make it more manageable or if there was no GBG in the future!'  A prospect too scary to discuss here. 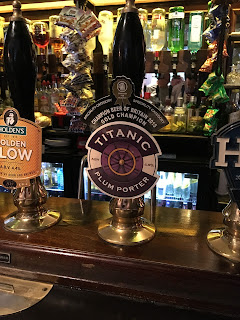 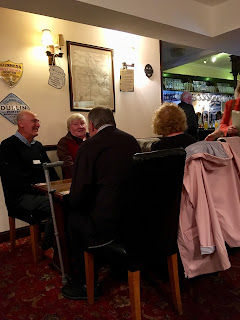 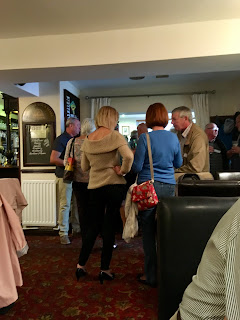 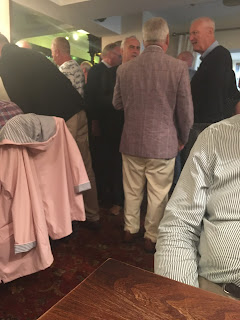 So that was all a bit high octane as I'm sure you can see from the above pics, very much like Bar 19 in Blackpool all over again but totally not.

Join me tomorrow for part 2 ..... the pubs were just about to get even better!