BRAPA - What a Load of Cobblers. What a Pile of Pies. (Hunmanby and Filey)

Newcastle-under-Lyme may've felt like a rather heavy day on the Saturday, but 11 hours of the good old dreamless, and a restorative pick-me-up (well, iced coffee and banana) meant I was as fresh as the veritable Bertie Wooster on Sunday morning as I toddled off to the east coast.

The weather was as British August Bank Holiday as one could expect, and Seamer railway station must be one of the more purgatory-esque places to spend 45 minutes waiting for a connection.

A group of 50 somethings dressed as assorted fruit & veg had already wobbled out at Malton when, on the connecting train, I saw some scroatastic lads on their way to Bridlington.  With no discernible plan for the day ahead.  Pizza Hut, Cinema, Wetherspoons, even 'Titty' Bar, were all mooted as possible suggestions.

The reason I was over this way should probably be clarified now.  EL of West Brom (a lovely bloke off Twitter, AKA Liquid Len, was up in Scarborough on holiday with his mates and having shown me the pubs of Tipton and West Bromwich in Jan 2017, thought a northern meet-up would be nice).

Luckily, and partly due to my reluctance to care too much about the 2018 GBG new entries for North Yorkshire, I had a few 'ticks' I could do outside Scarbs to add a BRAPA element to my day.

And not long after 12:30pm, I was in Hunmanby, which I'd always called Humanby and imagined as some zombie landscape.  It was pretty wild and desolate (or just plain boring) as I crossed two railway lines to find the pub in the heavy drizzle: 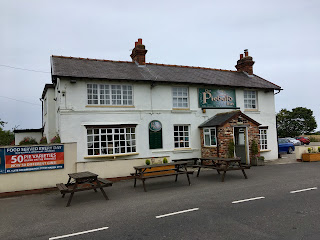 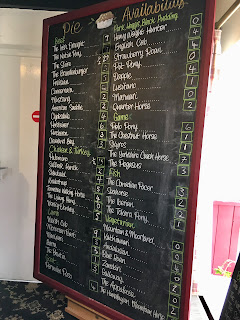 It'd probably be disingenuous of me to wander into a pub on a Bank Holiday Sunday lunchtime near the coast, which makes no secret of a pie obsession, and start slagging it off for not extolling the full virtues of old fashioned pub life.  I say 'probably'.  Families, buggies, twild-life abound, Grannies were wheeled in, men with sticks dithered, yes, never trust a pub with a capital letter halfway through its name, it may as well have an @ symbol.  Deserves a fair bit of praise in the circumstances though.  I was given a cheery welcome by the barmaid, who seemed to have drawn freckles around her nose to accentuate what I'm not sure, approachability?  Cuteness?  Another barmaid rushed in clutching three limes, whooping.  "It doesn't take much to excite her" said my barmaid rolling her eyes, and I tried to say something witty back but the witty-window had closed and I was left open mouthed with my pint as she served the next punter.  Shame.    I got something pale and Greene Kingy, and actually enjoyed it a lot.   Where to sit?  The bar?  No, I actually found one (and I mean ONE) high stool not geared up for eating, such was its proximity to front door and blackboard menu.  Downside, people kept trying to stare through me to see what was on offer.  Upside, well, I've pubbed enough to know a table like this was a big bonus in this situation.  Let us admire the pies.  A brilliant selection, and not the poncy bullshit dished up by GBG failure Pie n Ale in trendy Manchester (Raspberry Coulis and Lobster Thermidor anyone?)  This was proper.  Beef, chicken, game, black pudding, even fish (did I really see a Seahorse pie?), and the odd veggie one in case my sister walked in.  Peruvian goat would've been my pick, but I was on a timer.  And could we really beat Rotherham's Pukka Beef & Onion straight out of the microwave?  Ping.    Even the Wifi code was a Pie-fi code!  Bit of controversy as one of the many Peroni swillers (this wasn't an ale drinkers pub, not today anyway) couldn't find a table so plonked his order number and pint on mine, so I edged my GBG closer in an attempt to squeeze him out, and glared at him.  He finally pissed off, a worrying moment.  Worried for a second the staff may try and move ME, but they smiled and seemed very happy to have wet-led scum like me in their midst.  So plenty to commend this place all things considered, well done PieBald.

To Filey or not to Filey?  Hmmm, did I have time?  I was at a bit of a crossroads, literally.  Ha ha ha. 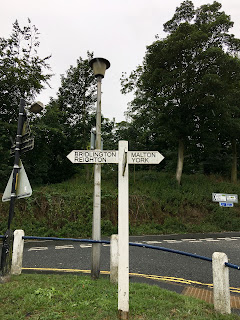 So yes, I took the bus from Hunmanby church on to Filey bus station, only about 15 minutes, where I had a micro which I really should've done by now ..... 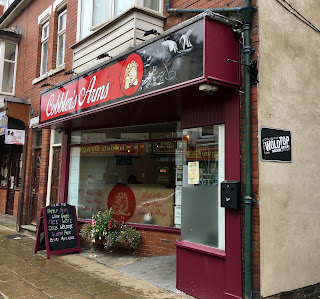 Northampton Town theme pub, or a former shoe shop?  That was the question on nobody's lips as I tentatively pushed the door to find myself in a thriving Bank Holiday afternoon scene.  Yes, if visiting a pie restaurant on such a day seemed an unwise move, visiting a Micro in a popular seaside resort when it's chucking it down and blowing a cold wind was always going to invite chaos.  It started off manageable enough.  A young Mum had brought takeaway fish & chips in (tick on the micro bingo board straight away)  and three cute West Highland White Terriers were hoping for some of the scraps.  At the bar, the barmaid could barely raise a smile, rare for a micro.  I almost went for a Plum Porter after yesterday's flawed attempts in Newcastle-under-Lyme but it was an imitation by Millstone, a brewery I've never got on with, so I got Acorn Barnsley Bitter, one of my all time faves.  And good it was, though not Plough in Doncaster standard.  Barmaid finally remembered to force one out (a smile I mean!) and all was fine as I squashed between a quizzical looking couple and a tourist rucksack - hate it when people sit on one side of the room, but lay all their bags and coats on a bench elsewhere.  Selfish!  Or is that shellfish in Filey hahahaha,  I wasn't laughing for long.  The peril started when one of three twilds, one bawling his eyes out, rushed in from a hidden side room and he was wearing a full L**ds United kit.  Now there are full kit wankers and there are full kit wankers, and he was the latter.  His Dad was a good bloke.  At the bogs, I asked if he was queuing.  He turned into Chandler from Friends and said "No, I'm trying to control the kids, but they are totally all over the place .... just like their Mom.  Heyyyy, wait, did I just say that out loud?!"   Back in my seat, there were now SIX twilds, a teenager and three more tiny dogs alongside the three Westies.  It was like a cross between a Victorian circus and a zoo.  The Mum tried to get the kids playing dominoes #PubTwild which was commendable, the teen was watching WWE on his tablet, the total plank.  A woman laughed at how my space and 'quiet pint' had been invaded.  I mock complained to her, but knew it was all great blog material really.  And when I left, FOUR people (dominoes mum, chandler, the quizzical couple) said bye to me so I had made 'friends', ha, which I guess is what they claim happens in every Micropub the world over, innit?

Phew!  Time to catch that train to Scarborough and let EL know I was finally on my way.....

Join me tomorrow for part 2.