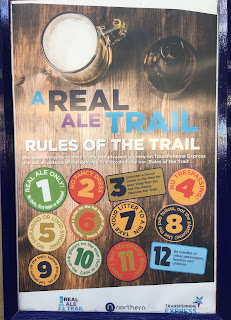 'Twas Saturday 25th August, and not too surprised to not have the new 2019 Good Beer Guide in my possession, I headed out to Newcastle-under-Lyme on the suggestion of Matthew 'SeeTheLizards' Lawrenson, as this was the town he grew up in when he wasn't cradling the Preston lamb, and local knowledge is always good in these situations, especially in the Stoke area, which if you are putting it into human body terms, is very much the appendix (sits there quietly harbouring resentment, then gets inflamed and has to be removed).

Despite Hull City being away to Stoke City, this was very much an NFFD (Non Football Football Day) for us, Tom had considered going but they made it all ticket at the 11th hour.  Just as well as SIX pubs were on our agenda.

Father BRAPA and I bumped into Tom on the train from Manchester Piccadilly down to Stoke, where we were engulfed by a load of Manchester City fans off to Wolves for a lunchtime kick off.  Tom pointed out, rather too loudly, that it could be worse, the Mansfield fans travelling to Macclesfield were bigger idiots.  "TAPS!" Dad declared as they scurried around looking for seats getting in our way, and I thought he'd seen a GBG pre-emptive out of the train window, but it turned out it was an acronym.  'Thick As Pig Shit'.  Now you seen where I get it from.

In Stoke, by the Titatnic White Star and Wheatsheaf 'Spoons, we took a bus to Newcastle where our first pub was in fact just outside in a Stokey suburb called Hartshill, though we didn't get the best bus option and had a 15 minute walk.  Still, we were in the first pub well before noon. 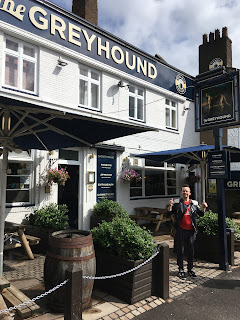 Having noticed this was a Titanic-Everards pub whilst on the train down, I told Dad I'd enjoy starting with a Plum Porter, one of your five a day and all that!  But when I couldn't see it, I went for the Steerage.  Dad hesitated, the landlord, who'd I'd already identified as a grump of the highest order, showed Dad the blackboard and explained other beers were in the back bar, including Plum Porter!  "Oooh, I'll have a Plum Porter" said Dad, glancing at me with a mischievous glint in his eyes.  Cheeky!  He did offer me a swap, but damage had been done!  Still, only myself to blame.  When will I learn to look at blackboards?  When will I learn to read Sir Quinno's reviews in advance?  And we settled into a calming early morning pint, few old men dotted about reading papers etc.  Not much going on.  "If you were walking the streets of Mombasa for days and found this place, you'd been pleased wouldn't you?" said Dad quite randomly.  Couldn't argue with that.  But then stuff began to happen, BRAPA stuff, weird stuff.  Two cocky Stoke fans came in and shouted to the bloke with the hearing aid next to us "we'll be happy at 5pm when we have all three points!"  Ugh, they haven't won at home since January and still massively confident of beating Hull City.  Then, the paisley shirted Lawrenson arrived on their coattails, then a man with a button on his throat came in and sat with hearing aid man.  One couldn't hear, one couldn't/didn't speak.  Perfect drinking partners.  But then Tom bellowed "I hate medical professionals!" and the barman gave him such a glare, and stared at him for the next 5 minutes.  Was this chap a former medical man?  After all, Stoke hospital was close by.  To try and ease the tension, I asked Tom to clarify his comment as he'd mean no malice, and sure enough, it was all about fear of being poked and prodded with surgical equipment, but it made no difference.  As we left, landlord stood in the doorway and silently growled as we took our glasses back and tried to say a cheery goodbye.  Not a pub I'd rush back to, though beer was good, yet probably not in the top 3 quality pints today.


I was actually so relieved to be out of there, I can't tell you!  The next pub was listed under Newcastle despite the fact it felt like we only walked up one street in the same area as the Greyhound.

With the name it had, I certainly wasn't expecting to walk inside to a carpetted old boozer, confronted by Draught Bass, with a friendly landlord with beaming smile saying "Hello gents, what would you like today?"  Beautiful stuff.  Maybe Tom could shout something random and upset him?   As I spied the Bass and thought 'come on Si, keep the #pubman spirit alive', Dad said from behind me "don't believe the hype".  Whoah, what was this, some anti-Bass intervention?  But then I noticed he was just reading out the name of a beer on another clip.  Was one of those confusing situations where they have 8 pumpclips on 4 pumps, something my brain has never quite been able to feel fully at ease with!  Even more Stoke City fans in here, ruddy faces, parsons noses, wild roadie types, I think Newcastle must be the discerning Potters pre-match watering hole.   Matthew introduced me to his new pub mascot, Joule the owl (pronounced Jowl like what the ladies in Doncaster have) and said the gents toilets had saucy seaside postcards, yet Tom and Dad were more impressed with the hallway Lincoln to Boston boat photo, probably because they are modern 21st century men who support the #MeToo movement.  Really good pub this one, possibly my favourite of the day, and the ale (not just my Bass but the others we got) was absolutely top quality.  On the way out, we admitted to being Hull City fans and a Stoke fan said something to Dad but he couldn't understand so we just left. 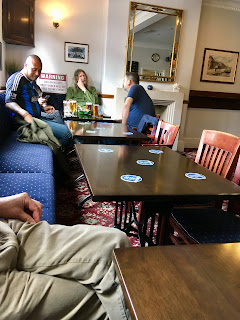 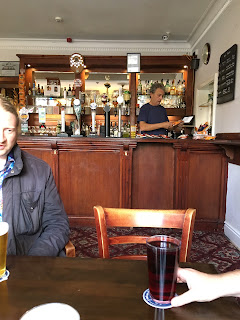 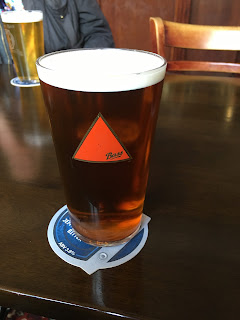 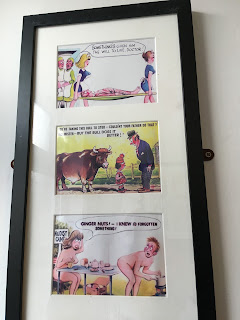 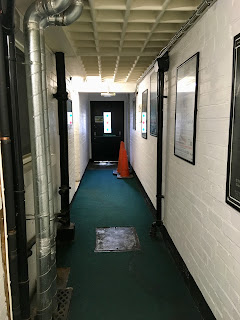 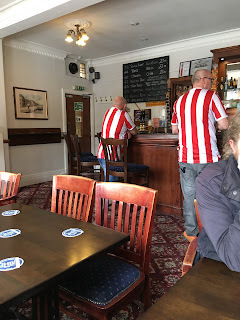 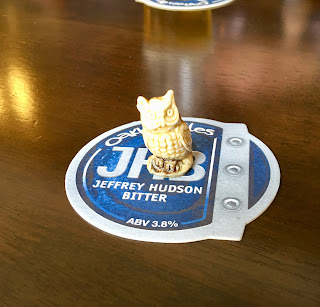 We marched onwards, and under the underpass to Newcastle 'proper' where our other 4 pubs lay in a more central location.

Our next pub was the most highly anticipated of the day.  Why, well let us try and find out .....

Pubs are a bit like comedy series really aren't they?  Some of the best have that socially awkward element, which sometimes spills over into wanting to hide behind your hands, or a cushion, or even crawl behind the sofa, almost glad when it is over.  But then, when you talk about them, you realise they were actually brilliant.  Love them or not, things like The Office, Curb Your Enthusiasm, the Brass Eye Paedophile Special.  Amazing.  That's how you'd have to describe this place.  And I say this even with legendary owner Grum (described by the GBG as 'charismatic', by everyone else as 'totally mad') on his 2 week holiday, so you could argue we got off lightly!  We'd barely stepped over the threshold when a cheery young lady of the utmost spirit says "which one of you's from Grimsby then, I went to college there!" and even someone as Tommish as Tom was initially gobsmacked as he admitted it was him.  I'd still not come to terms with the fact it was one of those bar-less micros where the pumps are kind of on a wall, and the staff walk around like customers, always puts me a bit on edge anyway, I like that divide between the two!  I went back for Pork Scratchings, she told me to get proper scratchings cos pork crackling is too lame & easy and I was inclined to agree.  I wanted two packets but was too scared to question only getting one.  We retired to a standy-up stooly area in amongst the mass of pump clips and bright decor.  Tom got onto the subject of mascots, probably inspired by Joule the Owl, and mentioned his own Billy the Tiger, and the time when former Hull City owner Paul Duffen sexually assaulted him.  "Whaaaaaat?" screamed out hostess, for she too was called Billie and when she heard 'billy/billie' and 'sexually assaulted', it alarmed her.  Well, as if I didn't already feel awkward and on edge in here!  So a bit like the Greyhound, glad when we stepped back out into the fresh Newcastle air, but looking back, the pub did have something special and unique about it, great ale, and I probably would go back, but only in disguise. 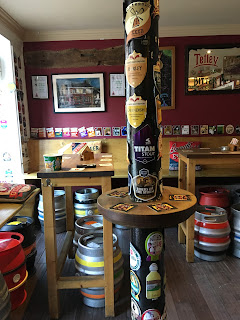 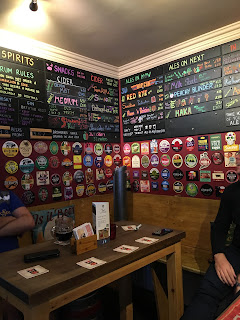 So that was the first part of the day, hectic!  The final three pubs in part two, but here's where my notes and sobriety end, so expect a vaguer write up on the others.

See you tomorrow for that.