So to re-cap the first part of Saturday 18th Aug, we’d finished Glossop, and we’d done the two entries in Hayfield.  The ‘main event’ was almost upon us.

The reason for my later start to the day than usual was that one of my pubs was a 4:30pm opener, even on a Saturday!  Madness.   I left the George Hotel in Hayfield at 4:05pm, and a 29 minute walk took west out of the village, through Birch Vale and onto the edge of Thornsett, where the pub was situated. 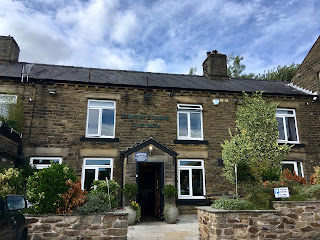 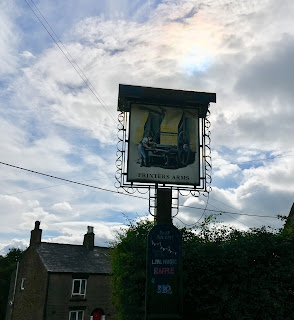 Walking in at 4:34pm to find the pub occupied by two middle aged ale blokes with tiny boutique dogs should have been notable enough, but it was the fact they were three quarters of the way down their pints that most piqued my curiosity.  Fast drinkers indeed if this pub HAD opened at 4:30pm (it obviously hadn’t).  I said a brief hello, but was disappointed to note the incredibly bored barmaid was of the P.I.S.S. variety, with an element of an early porcelain Hermione Grainger.   The pub had something of that ‘rural farmers village pub of old’ with wood burner and all the usual muck, but when “We’re Going to Ibiza” blasted out at a fair volume, it was even harder to feel nostalgic for a time I never knew, instead reminiscing on a twildhood trip to Ibiza.  The bigger of the two mini dogs, Ricky, danced on two hind legs.  A big fan obviously.  The second dog (perhaps called Stumpy) was so small it sat in his owners lap the entire time and slept.  These dogs weren’t suited to these men, or this pub scenario, it was a bit out of kilter.  When customer no.4, a man in a purple polo top arrived, I was determined to take him to my heart so we exchanged friendly ‘hellos’.  He knew the others, perked up the whole atmosphere, and rescued the barmaid’s lame attempts to swat flies with some dramatic swooshes and swipes, killing the little blighters dead.  She finally smiled, I knew she had it in her!   Hull City had lost at home to Blackburn though, so my mood wasn’t great anyway…… 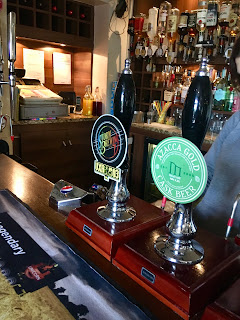 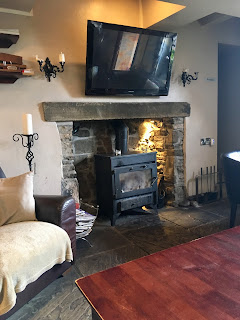 But on a more positive note, I’d had a late ‘Eureka!’ moment in here.  Desperate to get my six pubs in today, I noted only the Godley Hall (listed under Hyde) was handy for the train line back.  Otherwise, I’d need another 1.5 mile walk to the other outer Hyde pub (Cheshire Cheese), OR get off at Guide Bridge and have a similar walk to the two Denton pubs.  I didn’t fancy it.

But then I noticed New Mills station was now closer to me than Hayfield, and the next stop on that line was at Marple where I had at least two pubs still to do.  Hurrah! 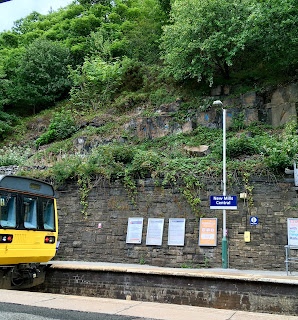 So on a different train line, I hoped not to get ‘gripped’ by the guard for that one stop.  But I bloody did!  My train ticket no longer valid you see now I’d changed route.

Once in Marple though, I realised the two closest pubs were listed under Marple Bridge, with the two Marple pubs closer to ‘Rose Hill’ whatever that is.  Hope you are keeping up!

A 10-15 minute trek through Marple Bridge found me at the furthest of the two listed pubs: 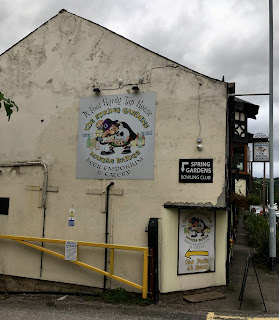 A dirty old building with the kind of comedy sign, font and words like ‘emporium’ and ‘eatery’ came into view as I approached, and I wondered what the ‘eckie thump lay within.   Nowhere near as quirky or micropubby as I was imagining, in fact a heart shaped sign for ‘Gluten Free Peroni’ was the first thing I saw as a series of attractive blonde ladies whizzed around, and eyed my pub photo taking with a healthy suspicion (at one point I crumbled and made a show of photographing my pint, just to create the illusion I was only interested in beer).  The ale I ordered from friendly ‘luv’ calling barmaid was a ‘Shooting Stars’ but only cos the pump clip seemed to show Ant & Dec rather than Vic & Bob.  It was one of the better pints of the day I must add.  Oh yes, I was in that South Manchester belt where anything other than well above average beer quality does not seem to be tolerated, so one consolation at least when the places themselves fail to thrill you.   The scene was dominated by a group of 4, a Mum, short skirted daughter, a quieter bloke, and the loud tall one who blocked out all the light and had a humourous anecdote for every occasion.   He wore the kind of crocs that you only expect to see in a Tiverton micropub.   He must’ve done 80% of the talking, highlight for me was when he did an impression of a fly buzzing around.  Good job he wasn’t in Birch Vale, he might’ve been swatted. 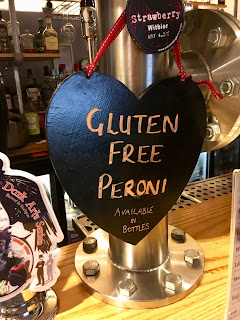 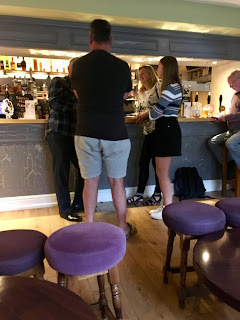 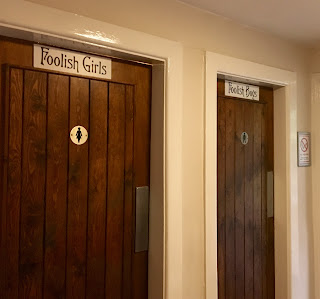 During my time in the Spring Gardens staring into space wondering why the toilets insisted on calling everyone Foolish (something to do with a brewery), local twitter ledge Andrew McWilliam told me about a great pre-emptive shout across the road *IF* I could fit it in.

Well, I’d had my morning banana so my ability to consume an extra pint of beer was not in question as I headed in to what I’d probably rate as my favourite pub of the day ….. 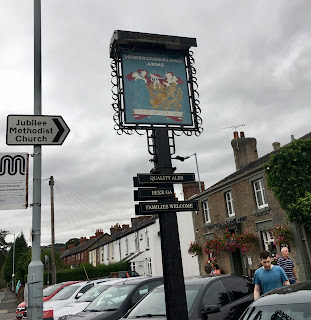 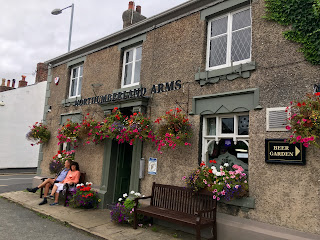 A timely reminder of what I love about pubs in that Greater Manchester section of the GBG (even if it isn’t one ….. YET!) I wandered in, all tight and multi roomed and dimly lit, the carpet seemed to kind of hug you as you stepped through like it was reassuring you to come inside, but that could’ve just been the amount of beer I’d drunk by now!  I wanted to get served through this little hatch, but a man I recognised from Spring Gardens (now wife-less) was not letting me past, so I had no choice but to apologetically duck my way past the blokes lining the main bar, eyes glued to the tail-end some Premier League nonsense, and whisper my order through to the friendly barmaid, one of those who I’m sure has served me in at least 25% of the GBG pubs I’ve done to date.   Then I saw another bloke from Spring Gardens, and then, and I’m sure it was him, Mr Anecdote who’d blocked all the light out.  He  was far too tall for this pub, but like the hatch-blocker, he’d ditched the lady folk and the other bloke to come in here.  He didn’t do his fly impression which was sad.  As the game finished, a visiting man left and the locals patronised him with a “keep on supporting United” comment, slagging him off no doubt as soon as he left.  I’d perched low down near the bar, desperate to be right in the hub of this little gem, and soon got talking to a bloke and the barmaid about BRAPA, showing them my GBG.  They were semi-amused, but for the first time today, I was with folk approachable enough to show my true colours!  And that is surely the sign of a classic.

I’d not even mentioned the dog getting strangled, the rubbish Arsenal fan with the slow mind and obscure quote “oooooh, oreo thins are an omen!”


As I remembered I still had another pub to do here in Marple Bridge back towards the station (ugh, I was starting to feel it by now).  I remembered when I’d said “the best thing any independent pub ticker can do is find the Stockport CAMRA pub of the year, take a shit on the middle of the carpet, if it has one, which it perhaps doesn’t, and if you can still be respected, you’ve made it”.  I had no idea what I meant then, and I still don’t know what it means now.  But I had a point, whatever that was.

This next pub seemed to be receiving mixed reviews on my twitter, so I was determined to refocus, feeling like David Attenborough as I peered through the hedge at the outdoor drinkers….. 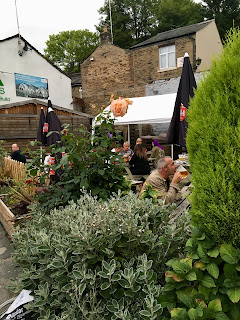 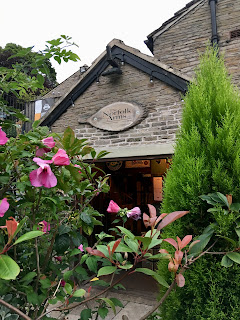 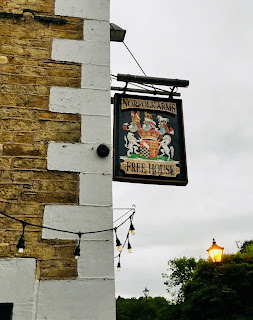 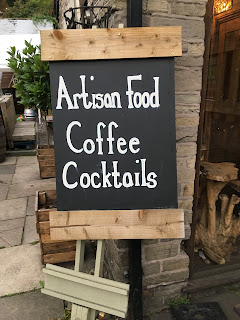 From Northumberland to Norfolk then in record time, and the blackboard by the front door screaming “Artisan Food, Coffee, Cocktails” was perhaps a warning not to expect more Northumberlandy unfiltered pub heaven.  Each word, like stab through my pubby heart.  The outdoor drinkers had already had that vaguely annoying middle class ‘I’m sitting out here to be seen’ whiff of Ember about them.  Inside, the pub was one of those saunas with beermats, all wood and furniture cluttered around at weird angles making you feel that wherever you’d choose to sit would still be unsatisfactory.  Staff were efficient, beer was good and plenty of ale was being pulled considering the prosecco looking crowds.  People seemed to be wandering around the pub randomly, with no direction to or from the bar.  Atmosphere-wise, it didn’t feel too different to Bakers Vaults in Stockport, yet it didn’t quite have the same order and organisation.  In the end, I too decided sitting outside was best,  sadly having to have my back to everyone.  A wendy house looked bigger than some micropubs I’ve visited this year, and twild life played hide and seek around my table, parents too wasted to try and keep them under control.  But I honestly didn’t resent it!  Hope I’m not getting soft in my old age.  A strange place, all a bit of a mish mash. 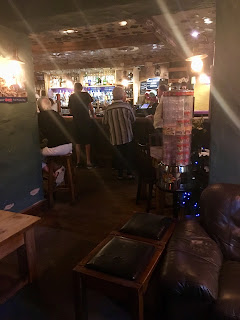 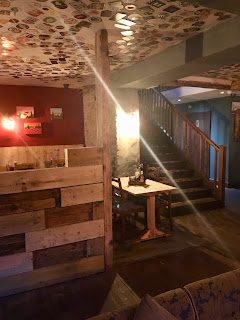 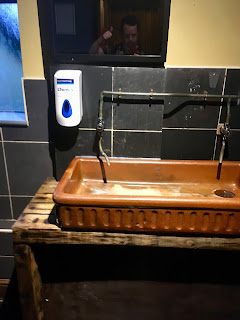 Back in Manchester, I had 40 mins til the next York train.  Ugh, but one of my favourite station pubs of all, and one of the most underrated I may add, was calling my name.  It’d been a while. 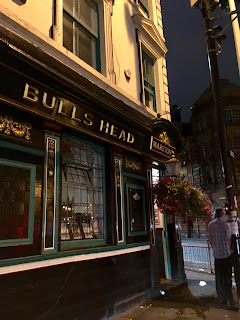 Yes, much better to go down the escalator and out of the less obvious exit at Piccadilly then pay £6 a pint in the metallic ‘Tap’ or chaotic ‘Spoons.  Despite being a Marston’s pub which isn’t a GBG regular and being just over the road from one of the busiest stations in the UK, there is something ridiculously traditional, quirky and homely about the Bull’s Head, and I’ve been 5 or 6 times now and always something is going on.  Today, a bloke across the bar tells the barmaid I’m CID.  She asks me if it is true.  When I say I’m not, she says we’ll pretend you are anyway, so I do but can’t keep a straight face when he starts looking worried.  I sit on my favourite side of the pub near the stairs up to the loo “Jamie’s Snug” but the 50 year old couple next to me are snogging so much, I can hear their tongues squelching and nearly puke into my Pedigree, which was drinking well to this point.  It’s a good job I’m as tight as an owl by now!  And I can’t sneak out either, as 4 blokes are singing Sweet Caroline really loudly and dancing around the front door, blocking it.  I chance it and one tries to take my hand and spin me around, so I pat his arm gingerly and say “ha, have a good one!” and squeeze myself into the chilly night air.  Phew!  What a whirlwind. 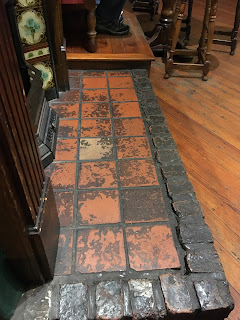 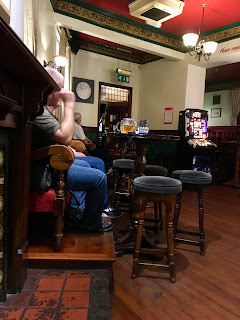