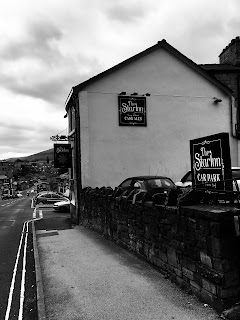 Saturday 18th Auguest saw another opportunity to mop-up some of those North Derbyshire pubs (and a few south of Manchester), what with Hull City having a home game against Blackburn which sounded about as appealing as a 4 night stay in an Aylesbury Ember Lodge (if such a thing exists). 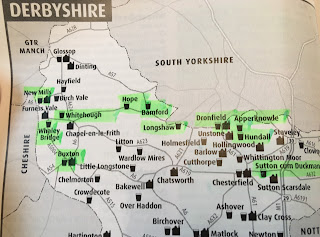 A German lady on the train, who'd tried to sit on my shoulder at least three times (just call me Long Si Silver) had already worried me, as had a Twild-led family who kept threatening to get off at places like Dinting and Broadbottom before following me all the way to Glossop.

This was my second ever visit to Glossop, having visited 2 GBG entries back in 2012, both very good - the Star Inn and a rare Sam Smith entry, the beautiful Crown Inn.  The football team lost at home to Runcorn that day but everyone was too sloshed in the clubhouse to notice, or even care.

Today's pub took me up to 'Old' Glossop, so a 15 minute walk beside a park and a lovely old church, where bells chimed out and wedding crashers sat outside the pub pretending they had been invited, I was feeling optimistic ...... 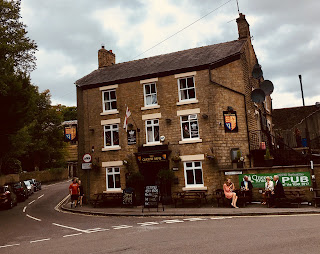 I think that because this pub had won a local pub of the year award ahead of the Crown and Star, and due to the nice out of town location, I was expecting big things.  Yet it never really materialised, being as it was, decorated in that rather bland, neutral style which makes you think the people in charge either have never been in a pub before, or aren't fans of the traditional concept.  And the recent theme of 'struggles to get served in first pub of the day' (see Bamford and Salwick) continued as an American pair of ditherers staggered in front of me to look at a food menu as I waited at an empty bar.  "Dunno where she's gone, she won't be long" one of the three old stagers told me at the bar, but by the time she finally returned, probably from the wedding, she served the Americans first who didn't know British bar etiquette.  They had halves of Corrs and Smiths Keg.  Boo USA, boo.   When she finally came to me and I asked for the Thornbridge pale ale, she asked with unexpected urgency "do you want a taster if you've not tried it before?"  For heaven's sake lass, just gimme a pint, it's a Thornbridge pale, not a Toffee Crisp and Guacamole Sourz, it'll probably taste like a Thornbridge pale.  I actually said "I'll be brave and go straight a pint of it", the three old stagers smiled, and I sat down opposite Cardiff v the Mags and enjoyed my cool drinkable beer, which tasted like a Thornbridge pale, hurrah!    My fave person who came in was a sort of young Graham Taylor.  His three excitable boys (I couldn't possibly call them twild life of the highest order) wanted to sit in my corner to watch the football, but YGT quickly surveyed the scene, smiled at me in a "do I not like that" kind of way, and took them to the opposite corner of the pub, making some vague "not enough room" excuse which wasn't actually true.  A couple did sit there, but apart from some vague tale about someone running off with their friends car, they didn't capture my attention, much like this pub as a whole. 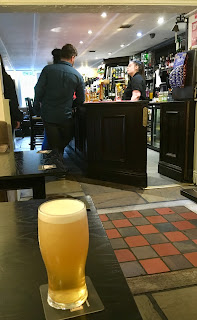 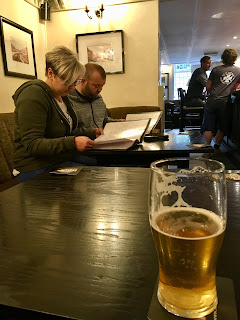 On the way back to the bus station (road where buses stop), I saw one of my previous pubs the Star Inn (see top picture), was tempted to go in but didn't.  The bus turned up a good 15 mins late, but before long, I was in the lovely village of Hayfield where Arthur Lowe of Dad's Army was born. 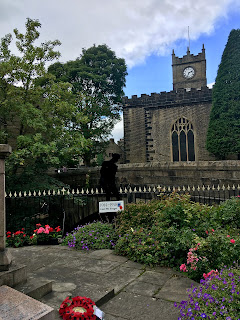 I crossed a little river and tried to use the rubbish GBG app to locate my first pub, when I was actually stood right outside it.  "You stupid boy!" cried a distant voice on the wind ..... 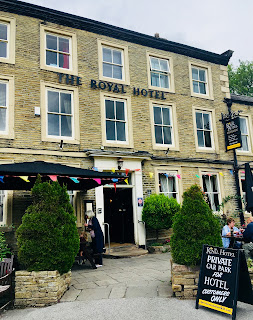 But I wasn't doomed and there was certainly no need to panic (sorry, I'll stop this now) as I stepped across the threshold of this peaceful, dark wood panelled hotel bar, exuding the kind of calm that only those olde worlde triede & testede GBG entries seem to be capable of.  'You can't fake it', as Fiona Bruce once told Philip Mould.  The landlady was a factor in this, seeming fully at one with her surroundings, like she belonged rather than just worked there.  Had that impressive stillness.  Following on from my Banksies bitter success in Milnrow a few weeks back, I went for the Mild, not sure I needed a jam jar to tell me what shade of dark brown it was supposed to be, but it felt like the right thing to drink here, and was enjoyable.  The pub may well have been Marstons.  I sat in the even quieter back room, sitting at a posing table doesn't really work when you are the only person in the room, I regretted not being in with the 'bar action' even if most people just snoozed on the bar counter, including a serious check shirted guy who only relaxed when a randy wobbly old lady he knew tickled him from behind and softened his mood.   I seemed a bit short on the ole' 'BRAPA weirdness' quota ('oh well, can't happen everywhere', I mused) but then I went to the loo (highest, blackest piss trough EVER btw) when a Dad and his son came in with the sole purpose of washing their hands and leaving!  "So are you only allowed in here if you drink beer Daddy?"  "YES!"  It was like they'd been paid a BRAPA fee to perform this moment of joy!  Oh, and I think the lad meant the pub as a whole, and not the urinals.  This opened the portal.  Back at my seat, two young men checked in for the night.  One had a BLUE LEFT KNEE SUPPORT.  Kindred spirit.  Don't know if I've mentioned my knee.  Then, the barman (possibly husband of our female heroine) returned from the kitchen all a fluster.  "I've just tried to dip a chip in gravy, but it was toffee sauce!"  This pub was far more amusing than I'd first realised.  Great effort.

The other pub was also a hotel, and with my guard now down, I was expecting a  hotelly hotel, not a pubby hotel.  But this would be a mistake on my part..... 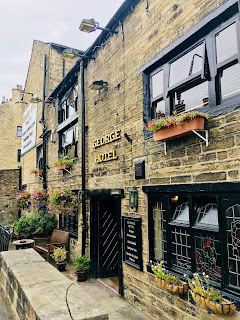 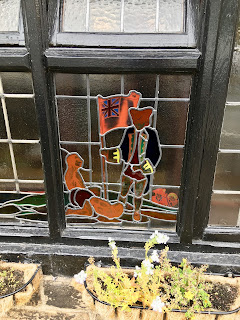 For I wasn't prepared for the scene that greeted me.  A small intimate low roofed bar, chock a block with about 7 old blokes moaning that at least one of the beers had gone off, possibly two, in what was definitely a Marstons pub this time, like so many GBG entries in North Derbyshire.  I edged my way in gradually, and tentatively asked the most vocal bloke which beer was definitely off.  "IT'S YOUR FUCKING FAULT, THEY WEREN'T OFF TIL YOU ARRIVED!" he roared and his mates laughed.  If this had been my first ever BRAPA pub, I'd have run out crying and would never have visited another pub in my life.  But the 2018 me chuckled falsely through gritted teeth, for I could now see the Boondoggle being errrrm 'mended' or whatever the word was so I asked for a Sunbeam.  "Aye, this'll be interesting, see if this one settles" said another bloke as if he was commentating on some sporting event and everyone went "aye!"   Three painful minutes later, the beer smelt fine but didn't clear, and I've had enough Sunbeam to know it ain't 'evil murk'.  "Aye, ya can't give 'im that!" said original bloke, and the poor barmaid, who'd been worked to the grindstone since I arrived, had to change this too.  Five minutes later, after much chat from rival Man City and Huddersfield Town fans about whether the Terriers could avoid humiliation (they couldn't), it was with both a sense of relief and reluctance that I took my pint to the modern leathery right hand side of the pub.  The only customers were a nice hen-pecked old bloke (he told a joke about a duck which went down well but I can't remember), and his trout faced wife who I smiled at twice but got nothing back in return.  Twout.   Time to go. It was 16:05, I was five minutes behind schedule.  Find out why in part two!

What with York dice night Thursday, a possible GMR trip on Fri and Newcastle under Lyme on Sat, it might be a long wait for part deux but I'll try my best.