Day one of the Rebellion Punk Festival in Blackpool had been so full of amazing bands, I didn't get chance to do any pub-ticking (unless you count Bar 19 which I'd done very early in the day).  By 1am on Friday, I managed to get a shot of my polycarbonate Hobgoblin in one of the more crumbling bits of the venue.  One day, I'm going to pass it off and sell it as a heritage pub photo of yore:


Whilst earlier in the day, in the 'Almost Acoustic' bar, I'd found an handpulled ale in the Winter Gardens for the first time in three years.  And it was good.  And it remained on til' Sunday!


Meanwhile, Twitter seemed to be trying to have a joke with my in the recommendations:


But despite a dry mouth, banging head and sore knee (which I don't like to talk about), I hobbled alone from Kirkham & Wesham station to Kirkham itself, about 20 minutes walk.  It started raining heavily.  Marvellous, this was so cleansing, as I approached the GBG listed pub, struggling to keep up with a dynamic older dude in yellow ...... 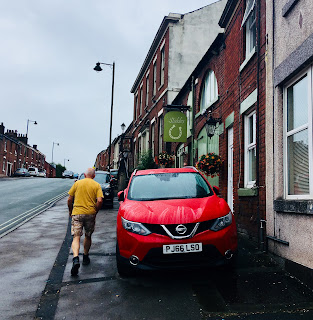 Despite the name, trendy pub sign, and the fact that Kirkham felt like a rather lah-di-dah place in West Lancs terms, the pub was just as mean and moody as the Bay Horse Hotel in Thornton, but of course with a decidedly daytime feel.  A studious young man served me a 3% table beer AND a can of Scottish lemonade (always the most alcoholic lemonade) and whilst the urge to create a quite weak and unacceptable shandy was always present, I spent the first half an hour cradling the lemonade to my skull and sipping it slowly.  No one minded, as the few people in were all older men and women occasionally making weird heavy breathing noises, groans or murmurs of surprise as another England batsman got dismissed, which happened every time I looked up!  The pub was estate-like in shape, but had enough big screens to feel a bit 'sports bar'.  After one too many England dismissals, a fed-up couple turned their seats 180 degrees so they were facing me, or actually the golf on the screen behind me.  To be fair, it was the lunch interval.  My festival buddy for this year, 'Krizbi' arrived having missed the train due to phone issues, and easily finished his drink before me.  Matthew Lawrenson too might've appeared, but he'd save himself for part 3 tomorrow.  But despite my tired brain, I could still remember I'd been recommended a pre-emptive by a nice twitter man called Ian Sutton.  And Krizbi had seen it on the way up.  I was feeling a bit better now.  Let's crack on!


So yes, just across the road and back up the main street of fancy Kirkham, the pre-emptive could be seen quite easily.  Was the Freddo 'missing hop' advert deliberate?  I doubt it, but had a pack of 6 Freddos in my Travelodge room so it had extra significance for me.  Almost emotional. 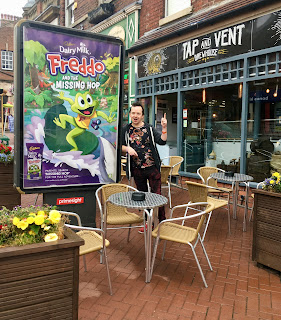 With an incredibly annoying name, I could fully expect to see this in a future GBG.  And was expecting to be 'venting' (ha ha) my frustrations, but there was something rather classy and well done about this particular place, to the point it almost felt, what, comfortable?!  Strange as it was almost canteen style, and with harsh metal bars and stuff, you'd expect one of those chilly London style brewhouses, but this is Lancs, the kind of county where you feel you are being cuddled by a buxom barm cake dripping in warm beef gravy every time you step foot in anywhere new and potentially scary.  Two old women (one of whom was mistaken for Tom when I showed Dad a picture of the pub later) sat in a booth, and with two men asking beery questions and being served slowly by the incredibly relaxed landlord, getting a pint seemed to take about 10 minutes here!  I'd never heard of North Yorkshire brewery either despite living there. 'Where are they from?' I asked, trying to sound like one of these beer bods who gives a fuck about what he or she is drinking.  They like questions like that in places like this don't they?  Usually.  "Dunno mate" was the reply.  The pub even had 4 loos, two marked men and two marked women.  Clean, tiled to a high standard.  Woah, this was above & beyond your average micro.  More old people wandered in and pretended real ale was a fascinating subject, as Krizbi pointed out the plugs even had USB charger points.  AND they worked.  How 2018!   Oh, and one final point - the place smelt of cheese.  Just like the Hop & Cheese in Hartlepool, another great pre-emptive, although that did actually have cheese for sale!


We couldn't linger though and walked back up the hill to Kirkham & Wesham station to take the next train back towards Blackpool, where we had one more cheeky stop off before we got back to Blackpool punk normality, if you can call that normality.

On the train, we met a punk girl from L**ds who broke off from her boring film (her words) to speak to us, and it was heartening to learn she was a recent Wetherspoons convert.  Despite this, she thought BRAPA was a bit of a dubious past time, and asked for tips on how to smuggle a bottle of whisky into the Winter Gardens which was never going to be easy.

We hopped off at Poulton-le-Fylde, where I'd ticked off the pubs in 2013 as part of my A-Z adventures when P was for Poulton.  But since then, the 'Spoons had joined solid entrants like the Thatched House as a GBG regular.

It sure didn't look at all Spoonsy from the outside, it looked like an actual pub with an Elk and everything!  I wondered if it was one of those 'former 'Spoons' like the Auctioneer (now the Gavel) near my accommodation in Blackpool. 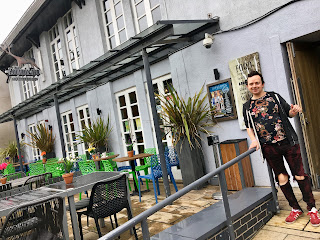 But once inside, it was so Wetherspoons, Tim Martin could've been stood there hitting you over the head with one of those strange blue & white plates.  An elfin barmaid served us, and although Krizbi chose sensibly, I went for the Phoenix Dry as a Desert as it is a beer I've had a number of times and found quite reliable.  After many top ups, patient "wait for it to settle" warnings from her, it was still a murky mess as we retired to a posing table within reach of the bar.  The pub had a surprising upstairs balcony and loos, and a heartening array of 'classic' locals like old blokes with sticks, loud twildy families, and lager lads making crazy hand gestures.  But I couldn't settle on this beer and took it back to our barmaid.  "Maybe it is supposed to be cloudy" she said, but I wasn't convinced.  "But we've changed it this morning!" she protested, but if so, it hadn't been changed properly.  'OH PLEASE JUST EXCHANGE MY BEER, YOU CAN SURELY SEE IT ISN'T RIGHT!' I'm screaming inside (I'd forgotten my 50p vouchers so wasn't even getting a bargain!), and finally, finally, I was allowed the same as Krizbi and delightful stuff too, whatever it was.  I observed the early afternoon clamour with some amusement, but the beer incident had taken it out of me.  As I returned our glasses and said goodbye, she seemed a bit more sympathetic.  "I pulled another pint of it recently and it seemed fine" she told me.  Beer eh?  The worst thing about pubs(!)


We couldn't shirk the festival forever and it was back to watch some bands.  The misty weather remained, and Krizbi's favourite fish & chip shop in Blackpool, Yorkshire Fisheries, (not really, he got bad chip service) had a classic mural:

Saturday would be the key BRAPA day as we had a lift to some rural pubs and two mystery guest stars joining us!  Stay tuned for part 3 for more on that one, which I'll hope to write up on Sunday.