Halfway through our Saturday then as local tour guide Matthew 'Seethelizards' Lawrenson navigated us through the mean streets of NuL for the final three pubs in the 2018 Good Beer Guide as I tried to put as much distance between my end of year 2016/17 figure of 1236 and the current 1470 in readiness for the great 'cross-ticking' due soon.

I say 'navigated us through the mean streets', pub 4 was directly opposite the awkward yet strangely great Bridge Street Ale House ....... 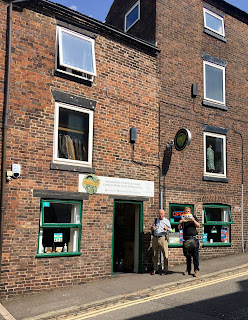 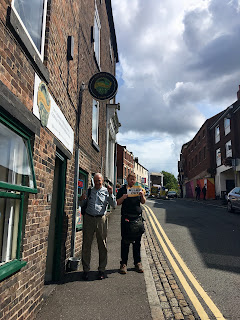 "One ale, you've only got one ale, CAMRA want you to fail, you've only got one ale!"  This was the chant that went up from nobody in particular as we wandered into this friendly airy modern bar, and not strictly true as despite this one ale, it had won a recent CAMRA seasonal award, thus cementing it's place.  And full credit to local CAMRA, for I can tell you it is increasingly rare to find 'one ale' entries in the GBG.  The small handful of Sam Smith pubs (and I bet I'm talking single figures), the thing in High Offley, and that gorgeous old heritage pub not far from Wembley, but usually, it's a case of '12 handpumps you say, quick get it in the Guide, no need to taste 'em!'.  Certainly in my local branch that seems to be the case but I'm being slightly facetious.  A pale from Neepsend of Sheffield seemed a nice neutral thing to have on, but Matthew told me they'd recently had some toffee porter (or something) which may be a more acquired taste.  The owner was a thoroughly engaging chap, even giving Tom a blackcurrant free run down of the non-alcoholic things in the fridge as Dad secreted himself into a corner which actually made him invisible.  We chatted at the bar and the owner tells us how he plans to extended the bar, get 3 or 4 ales on in the coming months, so with the weight of #pubmen across the UK on my shoulders, I felt the need to say things like "sometimes less is more" and "quality not quantity".  Oooh, that Bass was really kicking in wasn't it?  Tom drank something Elderflowery, the Neepsend was top class, and this felt nicely relaxed and unchallenging after certain other pubs today.

Our next pub if not a cellar, was a vaults, and it is funny I have all these Lymestone pumpclips and beermats at home, but I'm unsure I'd ever tried their beers before.  It was down a narrow side street, felt a bit like going into a bar in Barcelona, if Stoke was Catalan which it kind of is in many ways. 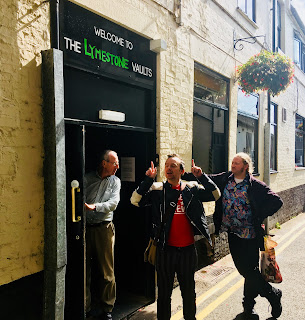 Special mention for our young host, who on seeing us eyeing up these new, exciting ales decided the time was nigh to wear his Lymestone heart on his Lymestone sleeve and make a concerted effort to impress.  I'm not sure we were underground at all, it just felt like it to me, but he had those eyes and jaw like one of those deep sea fish who crawl along the darkest ocean floors looking for plankton and stuff.  Me and Dad had asked for a cherry beer, and he didn't seem convinced by our choice, so gave me an additional half which was half of this with half a 'Stone the Crows' bitter to 'let it down'.  "That's what people tend to go for!" he said, indicating these wise Lymestone drinkers who didn't really exist.  I took me long enough to polish off this extra half, that when I did come to my 'official' pint of cherry, course it was suddenly too sweet, and we stayed here a while waiting for me to finish!  The pub itself, despite the obvious modern concessions, was cosy and opened up into a back room where old biddies dressed as Tom, dogs yipped, and middle aged doofus's with better behaved twildlife spilt drinks left, right and centre.  Or just centre.


One last push then before the bus back to Stoke proppa, and I was feeling free.

"As free as a bird.  On a wire.  A blackbird that is drunk in a midnight choir.  I've tried in my way, for a pee.  In this bog you can not change.  Fuck knows I can't change (my trousers)."  (I think I might be mixing songs up here but you get the gist).

When you are starting to 'feel it' (and I mean, really feel it), the last thing you want is a pub that seems more garish than your own wardrobe.  Bright purple walls, retro games machines, American pool tables, throbbing with the threat of DJ's or live music, hairy leather bikers, more saucy seaside postcards, comic strips, ladies in blue shoes, huge windows letting in far too much light.  It's like someone had been let out of Newcastle for a day trip to Birmingham on a fact finding mission to find out how young people want their pubs to look like in 1978, and he'd come back 40 years later with this blueprint.  I quite liked it, a happy atmosphere under the circs if you think of some equivalents like the Alma in Bolton or the Purple Turtle in Reading, not at all moody or up it's own arse, and a nice little suntrap for Dad to go and play in if he needed to escape the yoof of yesteryear.  Tom must have vanished too, buying slimline oatcakes no doubt, as I can't remember much else apart from me and Matthew playing pool and I played a lot better than I was expecting.  Lynryd Skynryd? Who??? 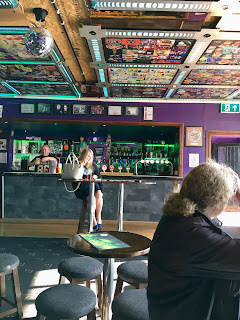 So there we go.  I ate an oatcake raw and got chucked out of Stoke in record time.  I ate a pie I can't remember, but a nice coffee in Manchester helped me see the world in a clearer light and it was off back to York well before bedtime.  A fun day, and attentions now turned to a bonus Bank Holiday West Brom themed day in Scarborough.