BRAPA - Chuckle Time with Chantry (A Rotherham Tale of Hope)

Despite having polished off all South Yorkshire Good Beer Guide entries for the 2017/18 BRAPA season many months ago, a Tuesday night after work trip to watch my hapless Hull City visit those Miserable Merry Millers of Rotherham provided too enticing to miss.

I took an hours 'flexi' time at work, met Father BRAPA on the 15:15 train, and we arrived in the second best major place in South Yorkshire (after Barnsley), surprised to see that by dint of a huge coincidence, Rugby League scumbadgers Hull F.C. were also in town (probably): 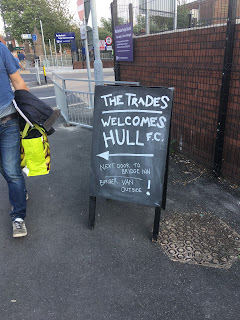 One for later perhaps?

For now, we headed to Cutlers Arms.  I always call it Chantrys by mistake, as these are the brewery who make their ales.  I did so this afternoon and confused Tom Irvin, who was joining us shortly.  The reason for the revisit to Cutlers is that last time I did it was post-match, depths of winter, rushed and chaotic.  I was aware I was in a beautiful pub, but just couldn't appreciate it.

Plus, the pre-emtpive Micropubs Tom had identified were all a bus ride out in places like Broom. 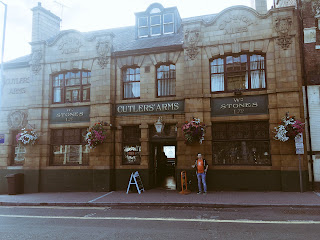 Oh yes, in these more mellow late afternoon surroundings, you could appreciate the full beauty of the pub with the green tiling, mosaic floors, curved woody bits, stunning old windows.  Grade II listed of course, a must visit for any pub lover.  But of course, being BRAPA, something less than satisfactory would have to interfere with all this.  Dad went to get a seat and I squeezed between the throngy old codgers to get us to pints of Chantry something (tried 5, all gorgeous).  What could go wrong, I appeared to be the next person waiting for a drink.  But to my right, some cod-eyed interloper (we can guess where he's from) started asking questions about non-alcoholic beer.  Not the time or the place!  The barmaid, all alone, had to depart the bar to go to the back of a dusty old cellar, bringing back three cans of non alcoholic Bud.  Then he ordered snacks, and some proper beer for his friends.  Took ages!  Dad must've been ready to send out a search party.  And when I did get served, she twice clarified "do you mean TWO pints, or one TWO pint glass?"  Was I going mad?  2 pints, I told her.  Admitted I hadn't heard of the two pint glass phenomenon before. "Oh yeh" she says "saves you queuing at the bar".  Strange.  Is this a common pub thing?  I'm guessing not, 2,220 overall pubs into my challenge, I've heard about pitchers, fishbowls and other novelty drinking things in party lagery sports bar places, but this seemed a bit different.  Dad, to his immense credit, had got a superb seat in a backroom that remained quiet even when the hoards came in, we could even get served from here.  Tom arrived of course.  And we had a reet good session, 2 lots of pukka pies, mushy peas, gravy and 2 pints for £10. I even put some Henderson's Relish on my peas in the absence of mint sauce.  Probably a 'bar-able ' offence, but I did it on the sly.  And however busy it got, service was wonderful after that early hiccup, even if the barmaid's voices were the loudest in BRAPA history since Ribs of Beef, Norwich, 2007.   Classic pub this, friendly folk too the Rotherham fans, don't believe the lies, it's jealous Sheff folk brainwashing you, get yourself down here. 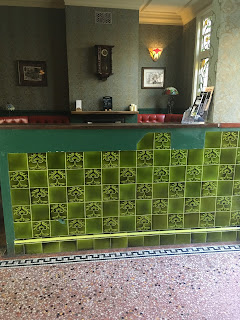 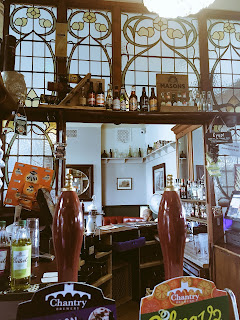 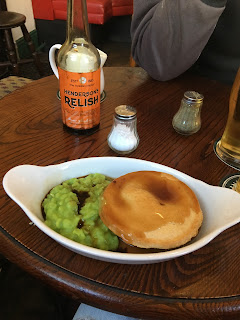 And the sense of well-being only increased as Hull City won 3-2, enjoy it while you can, victories will be few and far between unless we snare someone amazing before the Friday loan transfer window closes like Victor Anichebe, that kid from Fleetwood or Jon French.

Time for a post-match celebratory pint before the train back to L**ds?  Well, there nearly wasn't as we walked into the usually superb Bridge to find absolutely zero members of staff and an impatient queue of football fans just not budging.  Then, the Gooligans arrived and I knew our hopes of being served were even slimmer, so one bright spark (can't remember who) suggested The Trades (designated away pub for 'Hull F.C') and we gave this purple lighted empty (except for one cod-eyed bloke) WMC style place a try.

You couldn't really call this a pre-emptive due to the zero cask beer on offer, but who knows in the future?  Probably will be knocked into ten different craft 'units', each serving their own branded murk from under a nearby railway arch, each getting in the 2030 GBG (my fave will be called 'Feed the Goat', worst will be the 'Fortune-West Canteen Hole').  So, Stones keg it was, and by jove, I'm not being contrary or saying it for comedy value when I say it slipped down beautifully, and me and Dad both felt like it'd been some health restorative.  Like drinking a glass of freshly squeezed orange, by the time we got the train, we felt clearer headed, rehydrated, it was really quite bizarre!  The room was large, you could imagine it being brilliant for functions and events on a busy Sunday afternoon.  With tribute acts like "Reyt Against T'Machine", I can only imagine how joyous it can be.  Tom rightly felt this was the perfect time to have our BRAPA toast to the late great Alan Winfield, pub ticker extraordinaire not bound by GBG restrictions.  We imagine he'd have been a fan of such a place anyway from his various often hilarious extensive pub trips to 'real' towns such as Rotherham.  As Whitney blasted out "I Wanna Dance with Somebody", it was time to sup up and leave but this had been a surprisingly positive experience. 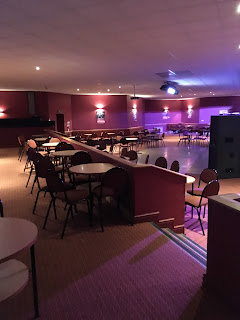 So, that was a quite wonderful night for zero pub ticks!  I'm not going to the Derby home fixture in the next round of the Carabao by the way, I'm all Hull City Tuesday nighted out for now.

Join me later tonight for tales of Newcastle-under-Lyme.  For now, time to watch Neighbours and have lunch, don't ya love Bank Holidays?