You left me waiting at a bus stop in Hemel Hempstead last time out, which was quite cruel of you now I think about it.

But don't feel too guilty, we were soon whizzing back past Hemel train station, in the opposite direction, where we stop in the village of Bovingdon.  Of course, no BRAPA day out with be complete without attempting something a bit more difficult, and 'difficult' in West Herts is basically "not on a train".

Time was of the essence, even with a 25 minute minimum, catching the next return bus would be a challenge.  Luckily, it was the sort of pub where it was quite easy to have a drink and leave, if you know what I mean! 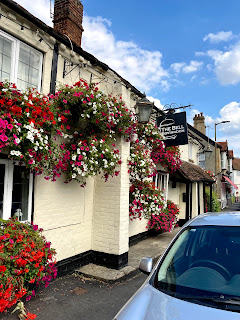 There was no disputing the winning 18th century interior here at the Bell, Bovingdon (1959 / 3388) with its low roofs, creaking beams, narrow corridors and raised bar area.  But middle of the road dining twee it also was.  If there'd been doubts about the presence of a ghost in the Swan at Bushey, I would not be surprised to hear such stories in here, an intermittent farting malevolent one or not.  The barmaid serving me is wearing a pair of glasses for the first time, and this has thrown the assembled old boys into a spin, unsure whether they suit her, and how to compliment her in a genuine way.  "You look more intelligent" didn't go down well.  The most gentlemanly softly spoken chap, to my immediate left, murmurs in a confidential tone "I think you look very nice, and I don't mean that in a sexual way " and she says yes, she knows he's a good man.  #WokeSi2021 approves.  Tempted as I am to chime in with "Are you going to call Scooby, Fred and Daphne and solve the mystery of the malevolent farting ghost?", I decide against it.  And if you are wondering why I didn't include Shaggy, never liked the bloke.  And don't even get me started on Scrappy Doo.  Twog incarnate.  A Scottish bloke is unhappy about that the Channel Tunnel doesn't run to Inverness, and his Scouse female companion may not have an opinion on that, but does agree with him about Greg Wallace.  Oooh gosh is that the time??  Down it, down it. 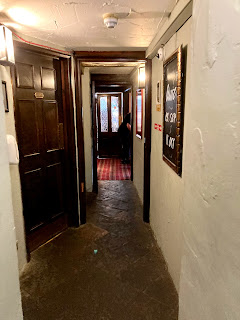 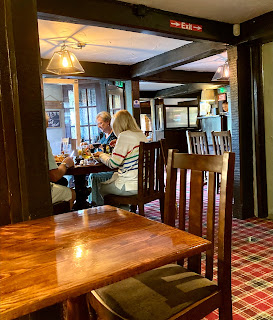 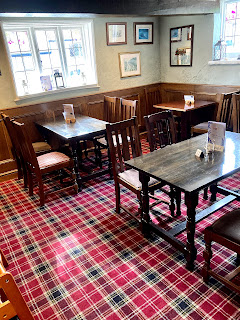 At the bus stop, I'm relieved to see it delayed as catching it was touch and go.  A hapless young lad with a burnt hand seems to be waiting for something else, but what?  Nothing is due!  I quiz him, and he's forgotten it is Saturday and is working on weekday times.  Ooops!  Luckily for him, I'm here to point this grateful Bovi Boy in the right direction, i.e. "jump on this bus coming .... NOW!"
"We all need a lucky break now and again" I say, disappearing up the stairs like some Yorkshire Angel of Superior Hertfordshire Bus Knowledge.
Next stop, THIS place and I won't deny it, I'm feeling quite emotional at the prospect of a pint of tolerable cask ale in the town .......
Yes, in the period circa 2005-2012 when I was at my peak Hull City away day Vicarage Road visiting, I can honestly hand on heart say that Watford was the WORST town in the entire football league to get a good pint.
In fact, my archives tell me you have to go all the way back to April 2011 to find the last time I had a decent pint here, in the West Herts Sports Club, sat in the sun on the grass.  Even then, my beer was green in colour, but I'm still counting it.
The pub was a short walk, and interesting to see it opposite the Estcourt Arms, one of the many pubs that consistently served me vinegar or nothing at all back in 2006, though I believe there are/were two Estcourt Arms so I may have the wrong one. 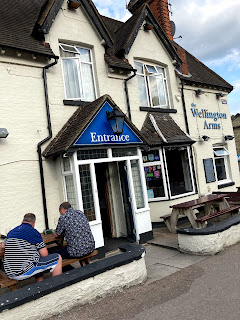 So I step up to the bar with some apprehension at Wellington Arms, Watford (1960 / 3389) and order a pint of Squadron Scramble by Tring because the bloke on the pump clip is looking at me like "chocs away BRAPA, everything is going to be alright!"  and it was, a delightful drop.  I closed my eyes and savoured a long swig.  A couple of old blokes eye me as if to say "does he need his medication?" but I had it.  Real ale.  In Watford.  From a handpump.  Emotional.  I'll give it another ten years before the next one, but we'll see!  Almost easy to miss what was really important here, the pub itself, proper belt n braces old school arsefest.  One of those pubs that felt like it was built for 3pm Saturday Gilette Soccer Saturday's.  Watford are winning awaay, many strangled cries of joy can be heard from the benches out the front.  Hull City lost at lunchtime, I'm over it, so not even they can spoil this moment.  It feels like the closer I am getting back to Bushey, the 'realer' the pubs are getting.  Without sounding at all patronising, well done Watford, bless your dark cold tiny occasionally beating heart. 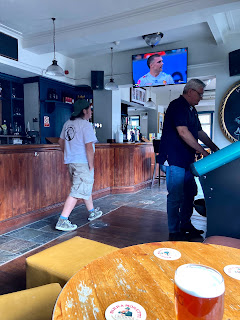 I could not afford to take my foot off the gas if I was to get both Oxhey pubs done, although I was finding myself getting drunker than last Saturday at the same five pint moment of the day!  I was on the 8pm out of King's Cross and of course, it'd be rude not to give myself a Parcel Yard chance too.
Back at Bushey station, I went to the slightly further out pub first, with its problematic 2:30pm Saturday opening time.  All was peaceful in the streets around, two barmaids smiled through the door, and it looked a nice boozer too ....... 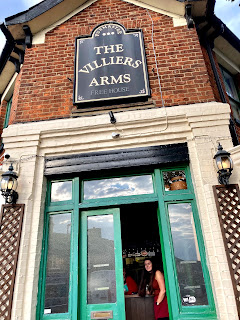 Villiers Arms, Oxhey (1961 / 3390) was the name, and if it is named after the chap who was the Duke of Buckingham, then he haunts the Cock & Bottle in York and is very horrid to women and hates crucifixes.  It is the only reason to visit that pub.  But this one was much nicer, a fine curved bar like you get in London, narrow around each side, very side street 1950's.  Confusing as it is now 1961.  The barmaid who looked a bit like Bobbie Mitchell off Prisoner Cell Block H if you are drunk pulled me a very acceptable Otter (not Keane Lewis), though I only chose it cos I'd already had the other two beers today.  You could make a beer ticker of me yet.  Are you watching Mr Dewhurst?  Same barmaid loves Colin, she's seen his family members recently and has been keen to adopt one of her own.  Second person recently who 'recognises' his kind, I hope he's not become too common.  That would never do.
Pocket calculators so you can work out how much to pay yourself, it might just catch on .... 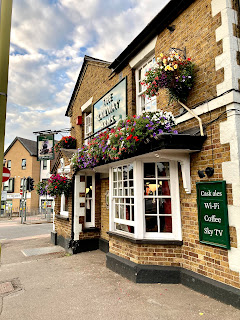 A surprisingly boisterous locals local, luckily I was at the comfortably numb stage as I enter Railway Arms, Oxhey (1962 / 3391) otherwise I may've felt intimidated.  A pint of Something Citra, not the official name, not Oakham, but the landlady who's jolly nice is pleased/surprised I'm eager to pay in cash.  I'm now getting adept at 'reading the pub' with regards 'cash or card' even at this drunkture (drunk juncture, I'm patenting the word so don't try and nick it).  I forgot the Twitter check in here, just a couple of slurred lines of notes on my phone.  I sat at 3 o'clock from the bar, there may've been football on, and an old bloke came to share my table which seemed exactly the kind of thing that folk around here would do.  I like the Bushey/Oxhey area, probably the three best pubs of the day, actually definitely.  Do my photos tell me anymore?  Errrm, I was impressed with the snack selection?  Does the GBG say anything interesting about the pub?  Former Masons meeting house, Gaelic Football shown, signed Watford shirts.  So not really.  Anyway, try to visit and do it soberer than me, I think it was good. 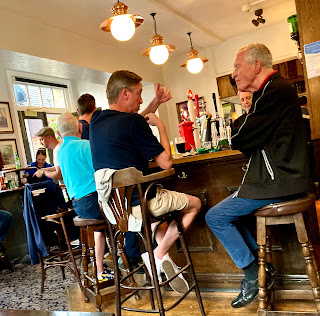 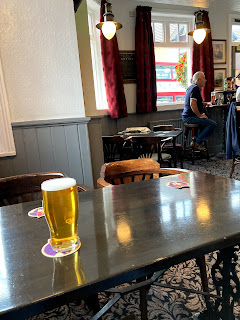 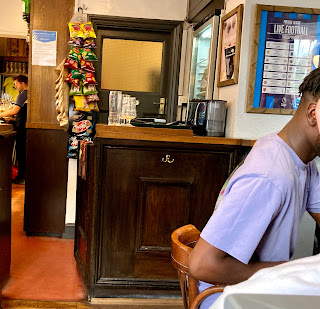 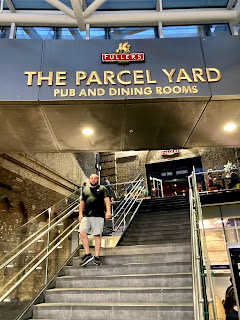 ESB was on, in perfect condition, and I say to the guy "it is a bit of an end of night tradition for me to come in here and have a pint of ESB" and he says I couldn't have chosen a better tradition, and I'm like 'hiccup, cheers mate'.  Convivial. 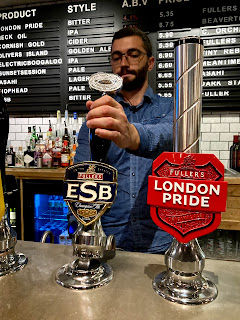 But the place is heaving.  And I'm relegated to the corridor.  Only plus point it is near the loo 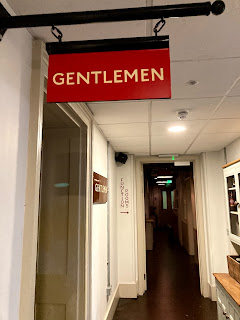 A very busy bee of a staff member seems to be up and down the corridor a million times, to the point we're saying "arite" to each other that many times, it's almost getting awkward. 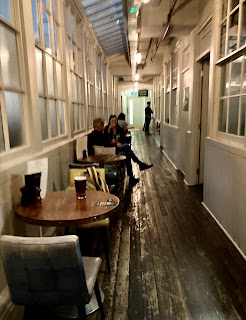 Stomach bubbling, I am struggling, I tell Col he can drink as much as he wants but he's like "you're on your own mate".  Cheers "pal" bring back the Otter!  (In more ways the one I'm feeling at this drunkture). 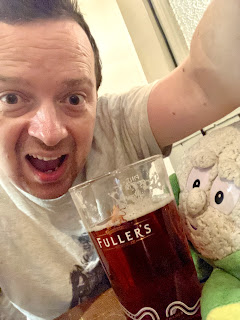 Thank goodness I just about force down the Devil's Own Juice, not my fave Parcel Yard experience but am sure it'll be better next time out!
Got a busy weekend's ticking planned, so see you on Twitter for Thursty Thursday tomorrow night, and see you for next blog Mon or Tue.
Take care and ta for reading, Si