THREE train delays, phone charger left in my hotel room (already on 59% battery) and a peculiar breakfast of Wensleydale and carrot chutney sandwich washed down with a strange cucumber & apple juice.

It doesn't sound like perfect preparation for an epic BRAPA day does it?  But as I wandered down the country lane outside Audley End station, I was whistling a brappy tune.  Nine Essex pubs until completion, and six of them today courtesy of the heroic chauffeuring efforts of Mr North Essex himself (even though he is really Mr Extreme East Herts), Simon Dewhurst.

Audley End.  I went there as a Saffron Walden child on a school trip.  I can still remember the song our teacher helped us make up :

They say it moved Dylan to tears the first time he heard it.

A ten minute walk took me to the first pub.

Five men with Scottish accents and a hatred of Hibernian jumped out of a shed.  Or course, the unofficial Heart of Midlothian fan club reside here!  The Wendens Jambos.  (Thanks).

Of course the only pub door open was the back one, this is 2021 pubbing after all. 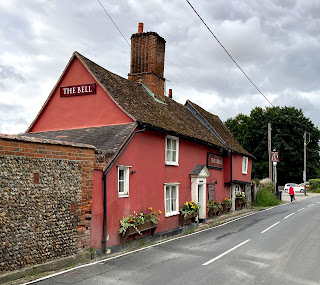 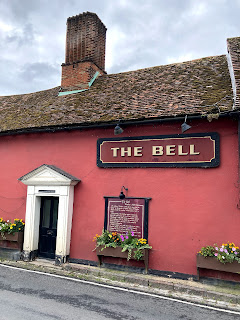 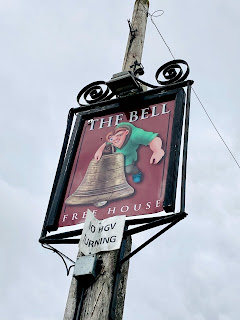 A pub as delightful inside as it is out, Bell, Wendens Ambo (1924 / 3353) stuck out from the crowd immediately as the two barmaids, probably little more than 18 year olds, actually asked whether I was local or visitor, and seemed genuinely, if briefly, interested in the idea of pub ticking, asking impossible follow up questions like on what date will I finish the book.  2nd September 2043 is my stock answer currently.  Being a Simon D-Day (who was currently on his way) , I had to have a Woodforde's Wherry to start, that famous local brewery near Norwich.  I've found the quality of it quite variable on my trips down here, but here, it was perfect.  The first 25 minutes I spent here were peaceful, just me, the two barmaids, a self important local woman, and her husband kowtowing to her , which over the years he'd probably learned was wise.  The highlight of the visit happened next.  A glass flew off a shelf behind the bar and smashed into tiny pieces.  No one had been near it, the staff looked quite frightened, the self-important woman was the only person unimpressed as it meant she was no longer the centre of attention.  A tense eerie silence filled the room, and then ..... the jukebox suddenly belted out Margate by Chas & Dave!  Tension broken, soon families and diners poured in, and to my relief Simon D strolled in just behind them.  Hello SD, let's get this pub ticking show on the road! 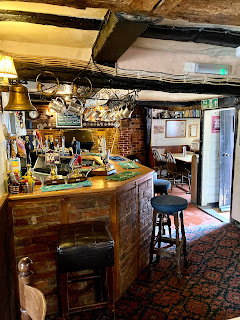 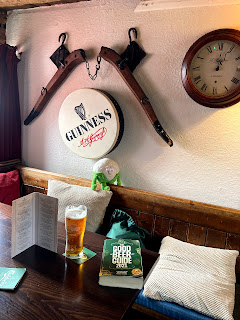 Ideally, we'd have started at the furthest point out and worked out way back in towards Wendens Ambo / Bishop Stortford / Sawbridgeworth.  But I'd noticed one pub closes about 2:30pm, not opening again til 6pm, even on a Saturday, so best get this done first!

I had my first view of Saffron Walden Leisure Centre since 1990 where I spent most of my time eating Lucozade tablets and playing Space Invaders on the upstairs balcony and Mrs Dodman taught me to swim 25 metres with a metal stick.  We continued south through beautiful Thaxted and its colourful old houses, like Burano but better, and luckily Simon knew where he was going cos my navigation was, in a word, totalfuckingshite. 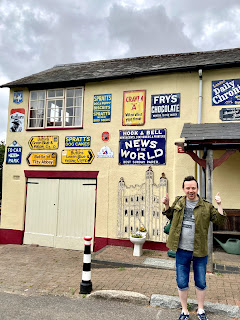 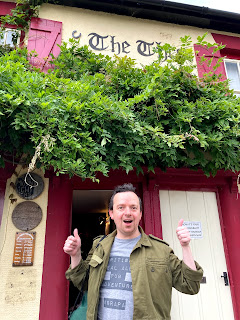 Boasting the biggest collection of Butlins memorabilia possibly anywhere, Three Horseshoes, Duton Hill (1925 / 3354) was part curiosity shop, part fabulous no nonsense traditional boozer.  Why I got my bank card out to make the payment must've been an auto pilot error on my part, it was obvious this was about as 'cash only' as pubs get.  Our Scottish host was spot on, and when he noticed my accent was more northern than Simon's, I asked which part of Scotland he was from, to which he replied "oh just a small place outside Glasgow".  They always do that, grrrr.  If they mean Paisley, say it, I won't laugh.  Simon noticed a curmudgeonly old barfly trying to return his pint, but the guv'nor tells him to stop whingeing, there's nowt wrong with it!  He was definitely trying it on though.  We were encouraged to look around, their function room had a view out onto a huge garden with an amphitheatre on one side, wildlife pond on the other.  We were also encouraged to look in the ladies loos (yes really!) which had an even greater collection of memorabilia, but we were unlucky that it clashed with probably the only time all week that ladies were using them, so we gave it a swerve.  Truly wonderful pub, only slight criticism might be that there's just so much 'stuff', it could detract from the fact that first and foremost, this is a classic rural pub.  I'd advise you all to visit. 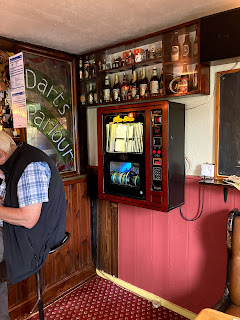 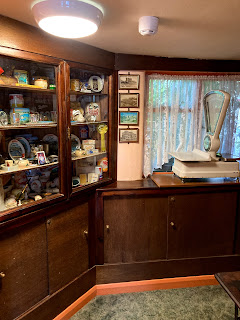 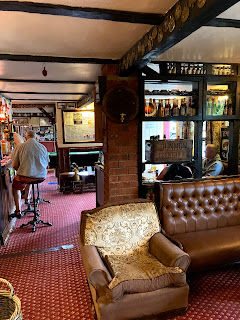 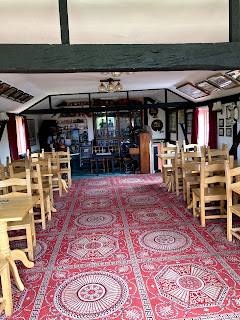 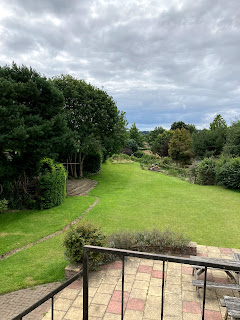 We left, both declaring it the best pub we'd visited together so far, on this, the third in our Essex trilogy, and let's face it, the standard has been high throughout the whole county.

On the road back up towards Thaxted, a sudden left turning took us to the 'made up by the Good Beer Guide compilers' village of Monk Street, which just like Durham's Hamilton Row, just seems to be a road/street name even though they should technically probably say Thaxted / Streethouses / Esh Winning or the like.  You know, let us not been too critical of the GBG, it is after all, the best book on earth.

We both laugh as a weird black painted long wooden barn comes into view, signs for reception and accommodation, a huge gravelly carpark full of cars.  'What the eff is this place?' the question on our lips. 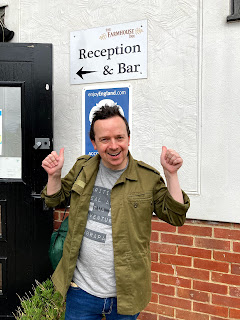 Farmhouse Inn, Monk Street (1926 / 3355) was always going to have a tough draw, following Three Horseshoes, but it held its own, to some extent.  A nice upstairs(?), sure we climbed some stairs(?) well worn carpets, serenely quiet (where were all these folk who'd parked here?), with an impressive Toby Jug collection, and a barmaid who was definitely a people person, and knew her onions when it came to real ale, predicting mine would need changing cos it was near bottom of barrel, she wasn't wrong, ugh!  Wasn't too sure on the replacement either, but Simon was enjoying it.  "Oh beer expert, what is that weird flavour?" I asked him in not those exact words, and the answer was 'Sorachi'.  Oh yes, I had one in Huddersfield.  Tastes like cat piss to me. Simon D tells me it is quite a divisive hop but he has a palette that can enjoy it, more his luck.   Then from nowhere, although we didn't ask, our barmaiderly wonderwoman brings us two samples of the third ale that's just been put on .  Ooh yes, best yet, bitter, refreshing.  What is this mystical yummy gem?  The ale in question....  Greene King IPA!  Not sure many people ever get a sample of that.  Not sure many BRAPA pub reviews are so beer orientated either.  Oh well, that's what I love about pub ticking, you just dunno what's coming next!  Odd place, but not without charm.  And I don't think I'll ever become ones of those Smelliers. 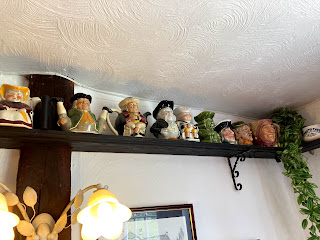 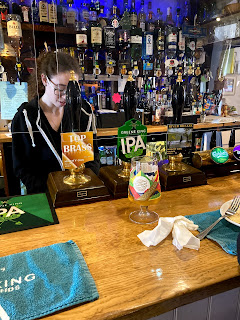 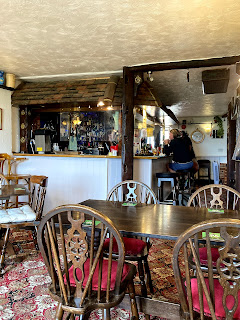 Did you enjoy that?  Well, join me next time for our final three pubs of the day, as I enter the abyss, or Fox & Hounds at Steeple Bumpstead as it is also known.  Haha, North Essex banter, cannot beat it.

See you on Sunday, time for an early night before Daddy BRAPA drives me around some weirdness.