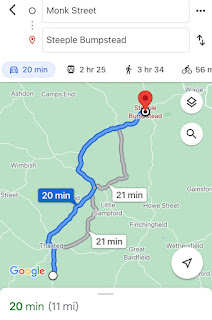 A 20 minute drive took us to our fourth pub of this exciting rural tour of North Essex's premier Good Beer Guide pubs.  Six to go in the current Guide.  I could almost smell the finishing line.

Steeple Bumpstead is one of my favourite named places in the UK, Wodehousian you might say.  It was a pleasure to be here, just as pretty as I imagined, a strange stand alone Mock Tudor village hall putting me in mind of Ledbury in Herefordshire.

A bit like at the previous pub, some weird black painted wood led us to the pub entrance ..... 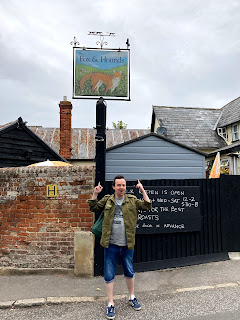 What a shame then that Fox & Hounds, Steeple Bumpstead (1927 / 3356) was the weakest pub today by some margin, a drab light wooden thing with far too many fairy lights.  The modern stained glass window in the gents probably the one concession to colour in the entire place.  Service was brisk, it was something of a surprise to see two more 'unusual' beers on as I was expecting something a lot more Greene King IPA.  The clientele, who with a couple of exceptions had a stick up their collective arse, looked like snooty escapees from Saffron Walden, finding the pubs there too 'rough', 'noisy' and 'fun'.  We'll let off the group in our room, anyone who has an eighties Anita Dobson perm is a hero in my book.  Simon identifies the one 'fun' thing in the pub, a very odd dog draught excluder, which after a toddler twild grabbed it and flung it across the floor suddenly had a much happier expression than the one I'd captured below.  But it was all too lame, when compared to the majority of today's other boozers.

To be fair, the other village pub, the Red Lion, looked a lot more dire.  A better ticker than me would've hoovered up a pre-emptive half, being such a difficult to get to place, but BRAPA doesn't do common sense.  And to remind us how close we were to the Cambs border, it had the classic library in a phone box, once quirky, now cliched: 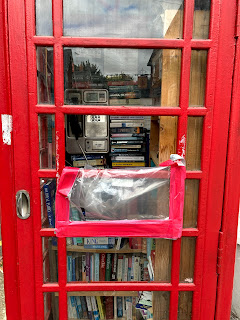 Next up Finchingfield, Simon knew how to get us here having visited in readiness for today's trip (all the name of research you understand).
It is often called the most beautiful village in England, with duckpond, windmill and stuff, there were loads of people parked up trying to get that same shot that has literally featured on chocolate boxes of this chocolate box village.
But I was only interested in one view, up the hill away from the centre, lovely bright yellow a bit like my skin and eyeballs after a two week BRAPA away trip ...... 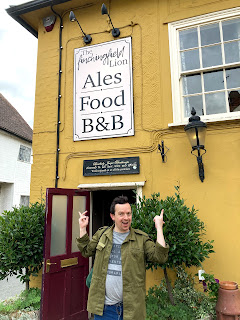 Finchingfield Lion, Finchingfield (1928 / 3357) was a true gem, an Essex boozer of the highest order and the only real challenger to Three Horseshoes at Duton Hill for the 'best pub of the day' contender.  You know when you walk into a pub, and there are blokes in hi-vis blocking your view of the ales that you are in a proper place.  Simon's round luckily, so I step back and let him do the hard yards, being careful not to tread on this little dog in the process which really needed its own hi-vis costume.  Lots of ales on, and pizza seems a big thing here too, menus in the gents have apparently ousted some bawdy humour or something.  In fact, Simon told me about a lot that goes on at this pub, had we come here a week earlier, we'd have been forced to speak like pirates whilst ordering our pints.  That would've been fun! Maybe.  Recommend you visit this one, something's bound to be cracking off!
. 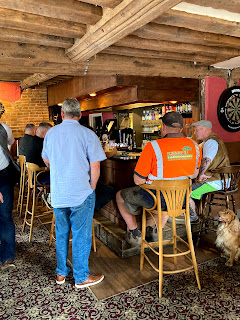 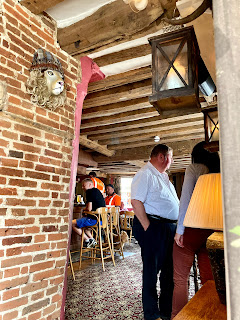 Our final pub of this wonderful day took us Great Bardfield, which surprised me because it was loads bigger than I expected, felt more like a town, it had a Co-op for heaven's sake.  In the fifties, it got famous for having lots of artists.  Only one visiting artist in residence today guys, a piss artist.
Shall we go in the sixth pub and stop messing about? 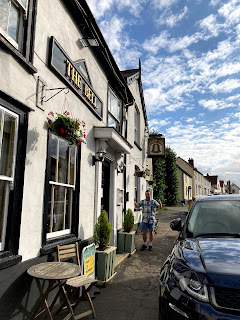 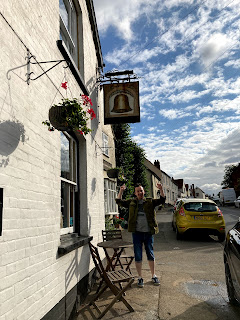 "Oooh we saw ya taking the photo" they say on entrance, nice to see a pub concentrating.  Funny one the Bell Inn, Great Bardfield (1929 / 3358), definitely nothing to do with the fact I was six pints in, but it was hard to know how to take this pub, felt like a it had a bit of a split personality.  We'd been expecting something real local howl-at-the-moon, but the truth was more fluffy, and I don't mean Colin.  On the one hand, you got pool table, piano and 'bring yer own tankard' nights, on the other you've got gin nites and sausage n chips in baskets, and glass cabinets full of locally made bracelets and jewellery, floral tablecoths, possible some nods to the arty tradition of the town going on.  I just found the sum of the parts a little bit higgledy piggledy (technical term), I'm possibly being a bit cruel, definitely recommend you give it a go anyway! 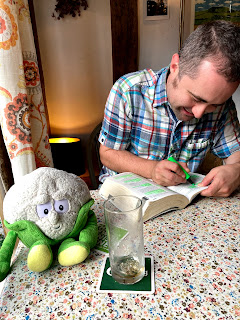 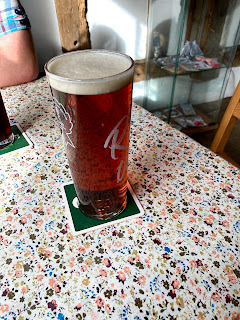 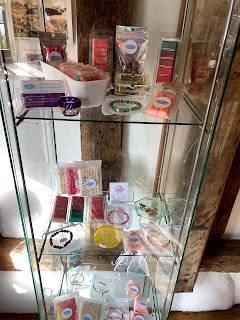 Well, that was all very lovely, and I say farewell to Simon and catch the train back to London.
Remember I'd left my phone charger in my hotel, my battery went pretty much as soon as I boarded the train so any hopes of a cheeky 7th tick on some tube line lay in tatters!   It was a case of back to Aldgate East, as soon as I can.
If you are currently sobbing on your keyboard thinking we'll never see Simon D again, do not fear.  He has kindly volunteered to take me (or Daddy Dewhurst may return) around those awkward East Herts ticks near where he lives, you know all those things with 'Green' in the name, so look out for that one when the night's draw in and October & November come round.  I cannot thank him enough for this help in rural Essex.
Once back in my hotel, I plug in, but I suddenly realise I want a late nightcap, so myself and Col trot around the corner to the probably not very pre-emptive Black Horse, here it was sticking out on the corner of Leman Street and Alie Street where I was staying: 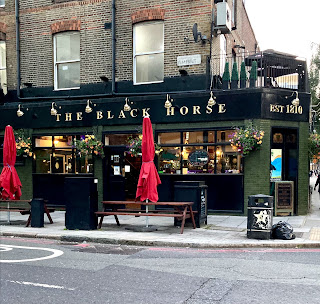 The cask was as non existent as the customer's, staff were watchful, the atmosphere only 'saved' when a group of ladzzzz came in and started going 'wooo' and 'wheeeeyyy' and I was just wondering if they about to start a rendition of Knees Up Mother Brown when my boredom was saved.  Lorenzo off of Twitter turned up, having noticed I was here!  We had a very nice little chat about local pubs, and a bit of Sussex too before he had to dash off. 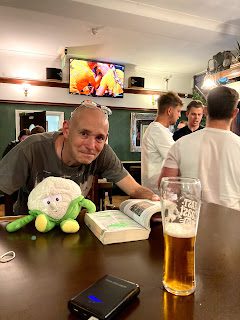 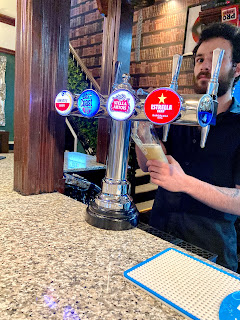 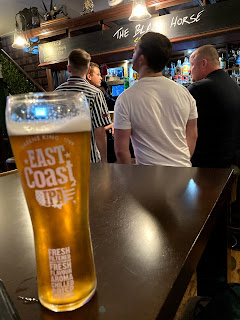 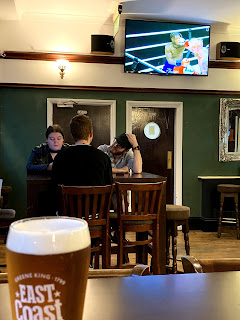 I drank up my tasty fizz and went across to Tesco Express for a nice big bag of food and drink, and an early night.  Big day tomorrow, tonnes of walking if I was to complete Essex with my final three pubs.  Join me tomorrow night, similar time, to find out how it went.
See ya later, Si