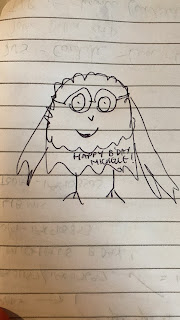 TT Ticking Thursday (I'm still working on the name, don't rush me) was back with a bang last week in what became a bit of a ridiculous epic.

With only SIX South Yorkshire pubs remaining, the finishing line was in sight.  And FOUR of those could (and I'm italicising it for a reason)  be achieved tonight, thanks in no small part to the generous chauffeuring of Retired Martin, who moved from Cambridgeshire to South Yorkshire just to help me tick it.  He's moving to Ross-on-Wye in 2022 I hear.  Don't tell Christine, she doesn't know yet. 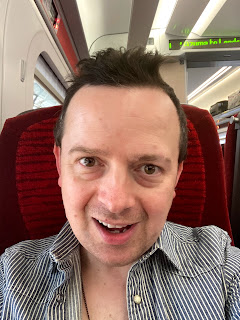 The Sheffield train would leave from Platform 3B, I had 15 minutes, Draughtsman just behind me, would be rude not to have half an 8.2% Double Deception from Abbeydale wouldn't it?
Here are some reasons why I think it might be the most underrated station pub I know ...... 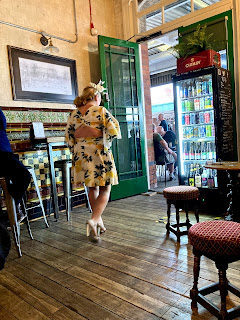 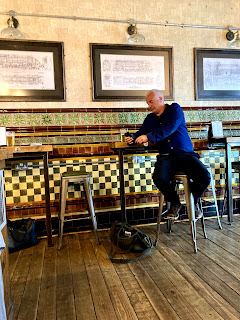 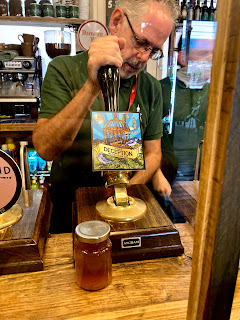 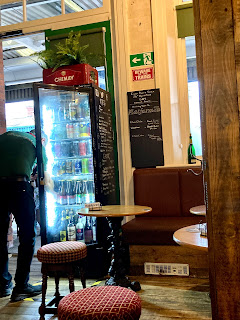 Once in Sheffield, I'd have been happy to take the tram up to Malin Bridge and walk, but being the gent he is, Martin picks me up right by the station just as he did on that famous 12th April date where pubs reopened outdoors.
He cannot believe the huge amount of TRAFFIC.  "WHERE IS IT COMING FROM?  WHERE IS IT GOING?" he exasperatedly exhales at five secondly intervals.  I make sympathetic noises.  Eventually, he tells himself to shut up.  I say nowt.  I'm just glad to be here.
At least he knows where he's going, my Sat Nav lady is saying nowt too.  Soon, the pub is in sight, and like all northerly Sheffield pubs, it has a wise old owl. 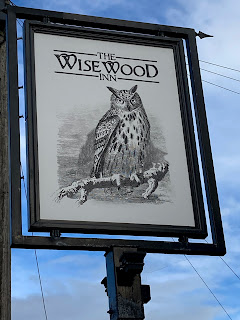 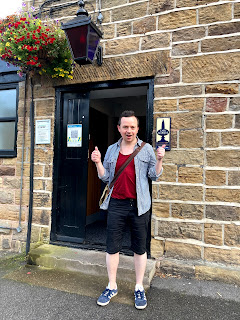 "Oh baby baby it's a wisewood" sang Jimmy Cliff about the place after a reggae all dayer here in 1969.  He'd been hitting the Loxley Ganja hard, and you can see why, nice little selection served by semi-interested staff here at Wisewood Inn, Sheffield (1946 / 3375), they seem a tiny bit freaked out by the sheer amount of photography going on and who can blame them?  But for a pub in north Sheffield, I had expected a bit more, it lacked any semblance of pub ruggedness.  In fairness, it isn't their aim.  Small neon hunting lodge chic?  Nice n all, including a further downstairs bar with handpumps which smells like a Canary Islands indoor pool.  My ale was in good condition, Martin's not so much, glorious garden from the window, funny little old fashioned van.  It all felt a bit like they were trying something cute that hadn't quite come off.  A failed Panenka penalty of a pub?  Luckily, we got lost in my GBG, the Sheffield entries to be precise, when we realised we were at cross purposes about which pubs I needed - confused by the sheer amount of Ale Clubs, Ale Houses and Beer Houses in South & West Sheffield!  Almost makes you nostalgic for that southern chain Antic and their weirdly named selection of Goaty McGoatington's Emporiums and the like.


Although I'd said I was quite happy to order a taxi, Martin being the ongoing gent he is said he was MORE than happy to drive me to the next pub.  Don't think either of us realised quite how far it was.
He vaguely points out where he lives.  Vaguely.  He's already had two interlopers in for a cup of tea, doesn't want me joining the party, photographing the downstairs loo, eating his supper.
Thankfully, Mrs Google Maps had woken up and gave us some reeeeyyt directions, the twists, the turns, the narrow lanes, the hills, jeez, I was seriously knackered by the time we finally turned off Archer Road onto Fraser Road, but then Martin notices before I do ......
SHUT EFFIN' PUB ALERT! 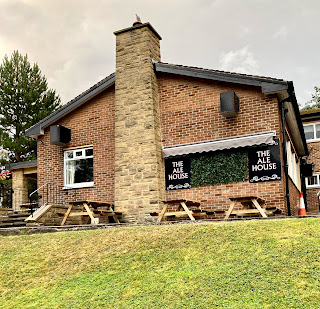 Nooooooo, Ale House shut, on a Thursday evening!  Who'd a thunk it?  Has it always been the case?  So many questions?  No answers.  Martin feels sorry for me.  I feel sorry for him, what with that drive n all.  This was supposed to be the really pubby pub I'd most enjoy too.  Boo!
So am I to blame?  Or it a recent change?  Way too many questions.  "You are taking it remarkably calmly" says Martin, but he can't hear the effin' and jeffin' in my head!    I'd be back.  That's all that matters.
Stuff like this happens.  Comes with the territory.  Put it out of your mind and carry on.
Martin was all pubbed out anyway after recent days, so he dropped me off at the next one, with the promise of two #Pubmen within to 'keep me company'.  Farewell and thanks for now Mr Taylor. 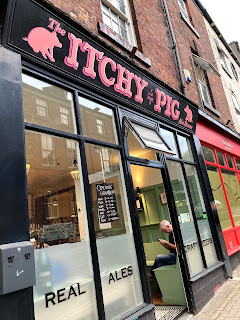 Citra Mick was the first face I saw when I entered Itchy Pig Ale House, Sheffield (1947 / 3376) a basic micropub which didn't do a lot to wow me aesthetically, the pig theme felt a bit 'token' with a few prints on the walls, scratchings etc.  I'd have gone the full 'oink' had it been me, bright pink walls and piped bacon smell.  That wouldn't have appealed to our vegetarian other #Pubman Will, known in pub circles as the Sheffield Hatter.  Not on Twitter, but he does read my blog which I didn't think happened outside Canada.  Will was talking to another nice bloke, who'd later help direct us to the next pub.  I order this 5% beer which tastes about 8%, when I tell the barman, he seems amused but agrees.  Everyone is very smiley in here, proof to me that people can make even more difference in a micro than a 'normal' pub.  As Will said, the tinny acoustics are the main problem here.  The bar top with coins was noteworthy, and the local joiner who made the pub!  Funny what snippets you get when in the company of the 'local knowledge'.  Both chaps are both slightly disappointed in me though.  "Where's Colin?  Only reason we are here!" they moan.  Colin is having his annual wash.  It is taking longer because my washing machine broke, the replacement had a broken pipe and flooded my kitchen, and now they are out of stock!  So he's gone to Mummy BRAPA's as things stand!  Strange to see Citra in a northerly location, but at least it allows me to firm up my November Hampshire Holiday plans.  #Pubmen of the World get discussed, Will does a nice segment on Alan Winfield, then 'everyone' says "have you met Quinno?" which is met with breathless wonder, awe and tales of Pub Galore.  I'm a poet and I know it.  Time to move on.

It is dark and drizzly now, Sheffield Hatter pulls on his hat (not the reason he is called this, something to do with Luton) and guides us masterfully through southern Sheffield.  Beer becomes the surprise topic of conversation and whether a pub serving immaculate Doom Bar and nothing else should make the GBG (answer is yes btw), Citra not so convinced, it's all a matter of taste.  "For instance, I hate Titanic Plum Porter but lots of people like it".
Well Mick, you know what happens when Plum Porter gets a mention, it tends to appear, a bit like Beetlejuice (which would actually be a good rebranding for it, I'd buy it) .......
Ecclesall Ale Club, Sheffield (1948 / 3377) surprised me, with a very nice smooth comfortable and easy lounge like atmosphere, part Bohemian Underbelly (a rare Queen b-side which last 5 days), part Jazz club.  Niiiice.  Grrrreat.  Moose on the wall, a lot more jolly than the moose/deer that kicked off the night in Wisewood.  That kind of offered the night a nice rounded symmetry I could appreciate.  Will was glad they'd left the door ajar, condensation and fustiness can be a problem here, and on a mild night like this, no complaints, and it didn't detract from the atmosphere at all.  Our table was a bit tiny for three pints, the Plum Porter was drinking excitably, as were the more local ales the gents got, and talking of Gents, after apologising for going YET AGAIN, the subject of Newark railway station popped up funnily enough, followed by plenty more 'being caught short' anecdotes from the guys, which made me feel better!  A nice relaxing end to what had been quite a tumultuous evening. 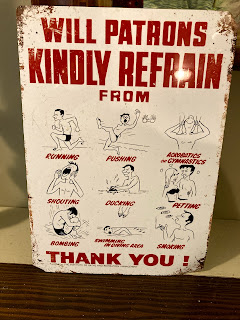 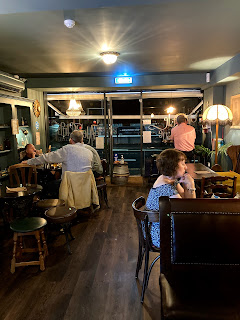 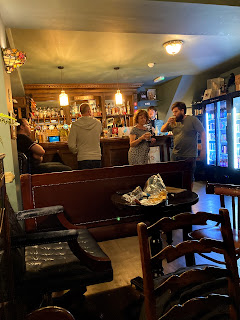 Citra and myself went to catch the bus across the road back into town, Will did what all good Sheffield experts do and started walking purposefully, to where, we can only imagine.
With time to kill before the train, it was the perfect opportunity to give Citra a debut at one of BRAPA's Top 100 Pubs in the UK, if such a list existed, which it doesn't.
Sheffield has a lot of fantastic pubs, but nothing quite beats Rutland Arms for me.  It combines quirky with old fashioned boozer, often has a surprisingly young clientele, remains unpretentious, and never had a dodgy pint in there.  Pretty sure it is a GBG regular, but when you've ticked 'em, you tend to stop noticing.  I'm glad to say Citra seemed impressed too and my Cherry Porter (I had the taste now after the Plum) went down well. 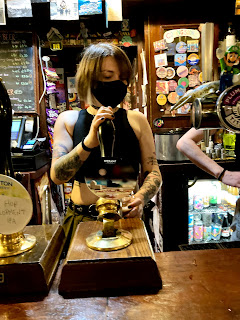 Just time to quickly show Mick the 'cut through steps' which Martin fell up on a legendary tickers day of old, their should be a blue plaque really.
We said farewell and dashed for my Donny bound train, I felt nice and blurry and happy. 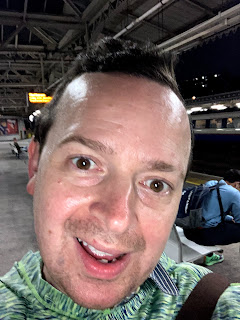 But there was time for one late cruel twist.  My train got stuck outside Donny station for 10 minutes.  We got in exactly the same time the York train was due to depart.  The platform was opposite, so I jumped like a gazelle, as did a young lady bound for Durham.  "I think we've made it!" I declare, breathing a premature sigh of relief, for it is still the time the train is due to depart AND I can see lights of an oncoming train in the distance.  But a stodgy station bloke says we've just missed it!  Nooooo.  FIFTY NINE minutes I had to wait, just with a raisin n biscuit Yorkie and 'Bomb the Music Industry' for company.  At least they left the loos and waiting rooms open.  But still fuming.  Didn't get in til like  midnight fifteen grrrrr.
Oh well, one more day at work and then I'd be off to Northumberland.  Which I'll tell you about in two parts, first of which is out on Friday.
Bye 4 now ya buggers, Si