Daddy BRAPA had got us on the early train up to Newcastle on my instructions.  Kip Hill was the original aim (one of my two remaining Durham ticks and probable 11am opener).  But then what?  Another gaggle of Tyne & Wear micros and farmhouses that might be shut by 2025?

No, I thought much more potentially satisfying to go to a part of the world I'd never been before.

Northumberland is a county I've not done a lot of, apart from a bit of outer Hexham, some of Berwick, and the bit near Blyth.   Not too many pubs, so it looks quite achievable, apart from the odd impossibly situated outlier.  And people tell me the scenery up on the coast is stunning.

Problem was, it all meant a lot of last minute planning over our morning coffee and lemon muffins in Newcastle station. 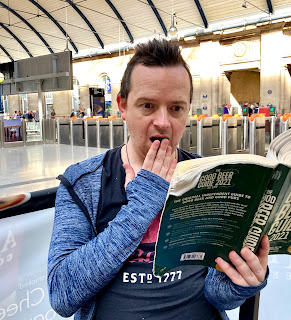 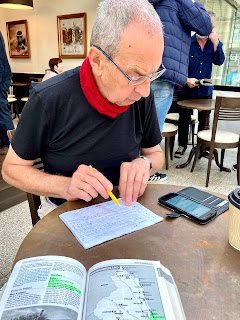 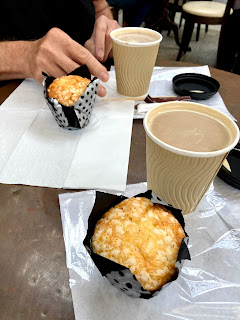 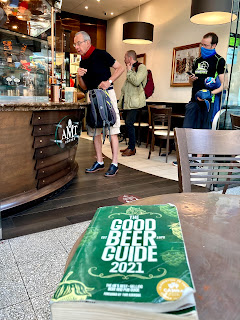 Oh, and don't mention Daddy BRAPA's 'new shoes' / shorts combo.  Cooking Lager did, and he then spent the rest of the day telling me not to include his feet in various photos.  Poor man was scarred!  I told him it was nice to see his wardrobe malfunction taking the heat of me for once.

We had a controversial new mascot too.  With Colin the Cauliflower finally back at Mum's for his annual wash due to my broken washing machine, and Alex the Apple failing to impress in Hertford, it was left to Keane Lewis Otter (really a Hull City mascot) to fill Col's size 3's.

The train took us to Alnmouth, a bit of a useless station being a 24 minute walk from Alnmouth itself, but a bus from Curly Lane took us to Alnwick.  You did have to worry about some of the local place names though and what it might be telling us about forthcoming beer quality. 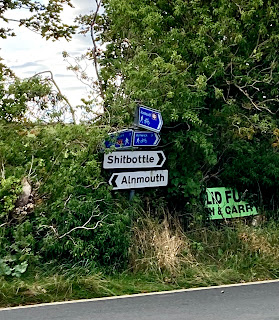 With half an hour to kill before 12 noon opening, we decided to wander towards the famous castle.  Now we would've been gushing over how 'fairytale' and impressive it was, and it is, but when they couldn't be bothered to let pedestrians down this narrow road and make people walk the long way round , we decided instead to be all huffy.  "If a castle can't be bothered with the general public, why should we be bothered with it?" as the famous phrase goes.

Who needs castles when you've got quality pubs anyway?  This one, lurking on a narrow sidestreet like your dodgy Uncle Geoff, wasn't quite open, Dad nearly colliding with a lad in a tracksuit careering around the corner.  "Bit in a rush for his pint of Stella isn't he?" I says ......

Before realising he's jangling keys in the lock, he's the hero come to open up! 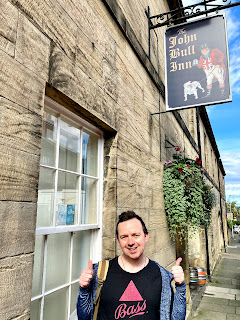 After giving the 'respectful' three minutes fifteen seconds for him to get the pub open and the ale flowing, we enter the John Bull Inn, Alnwick (1949 / 3378) and that fabulous fusty old pub smell hits you, a sure-fire sign you are in a fabulous pub.  In fact, had Dad used his classic line "we won't find a better pub than this all day" he'd have been fully justified, but I could seem him fighting against himself not to do the obvious for fear of sparking those Q.I. alarms.  Our barman sees my Bass top and says "great beer", I ask if they sometimes have it on in here, and he's like "no chance!"  So just a lad who loves Bass full stop, making my earlier stereotyping well wide of the mark.  We settle down along the ample bench seating, thinning a bit like an old bloke's hair, what a pub for Keane Lewis Otter to make his debut in.  The Five Towns pale was sessionable and a nice unthreatening way to start.  Only thing that was missing were a few more customers.  It must have a community following, for it has an annual leek festival, though none in 2020, damn you Covid!   We even stayed for another half, and that hardly ever happens, but we did have to hang around for a 2pm opener. 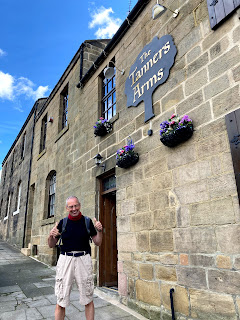 If I was expecting another traditional old boozer (which I was), it was time to be surprised by the Tanners Arms, Alnwick (1950 / 3379) where we found a fake tree plonked in the centre of the pub, with lots of autumnal leaves peppering the ceiling.  The benches purple.  It was quite unique, yet managed to retain credibility.  Probably somewhere half way between the John Bull, and the West Road Tap in Westlciff-on-Sea (I'd love to think you are nodding your heads right now!)  We've arrived at the wrong time, behind a group of overly inquisitive first timers getting the lowdown on the origin of the drinks.  Luckily it ends prematurely when one of the ladies in the group asks "is your cider local too?", the guv'nor replies "we don't have many orchards in Alnwick" and she shuffles off foolishly like the foolish fool she is.  The landlord is an impressively switched on bloke, starts confidently telling us at length about the beer we've ordered, Space is the Place from 'Out There'.  Shame then that he is pulling us a totally different beer, a best bitter from Rigg & Furrow!  I can tell Dad has noticed too as we give each other the side-eye, but neither of us have the heart to say anything, and thoroughly enjoy the bitter.  He keeps looking over and I'm sure he's going to notice, but never does, just shouts over 'are we enjoying it?' every few minutes.  Unless it was a deliberate social experiment he was conducting.   All that remains is to avoid two yapping dogs dominating the floor space, and smile lovingly at the various customers dotted around the purple benches.  Decent place.

Well, so much for having a long painstaking wait for the 2pm pub to open like I'd imagined, it was already gone 2pm by now which shows how long we'd nursed our 2.5 pints.

Still, annoying when pubs open later than noon on Saturday's, it'd need to be a jolly good debutant micro to pull this out of the bag ..... 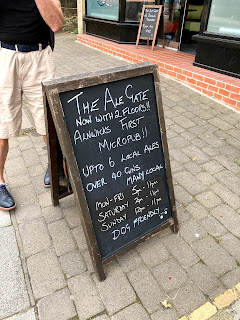 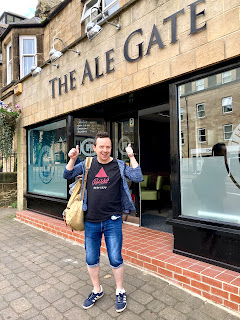 And I'm delighted to report, contrary to what I was expecting, Ale Gate, Alnwick (1951 / 3380) was a cracker, and definitely a strong contender for second best pub in this six pub day.  The landlady made it, offering a hugely warm welcome.  I'm excited to see so many classic old Vaux beers on (I remember the brewery lying in rubble when I had my University coach tour of Sunderland in 1997) though Google seems to suggest 1999 so not sure what I was looking at, Roker Park?  Oh yeah, probably.  Ward's Best Bitter eh?  Never thought I'd see that again.  So what did it taste like after all these years?  Well.  It tasted like David Holdsworth wearing a garish Sheffield Utd away kit (yellow and purple) lunging in carelessly on Kevin Phillips.  That's what it tasted like.  Shove that on your bastard Untappd.  Daddy BRAPA meanwhile had never looked happier, enjoying this Three Brothers Stout not caught up in all my nostalgia.  The place itself is comfy, bright, and surprisingly roomy.  Exactly how I want my micropubs - to be bold with their decor, plush with their furniture, couldn't care less if stuff is 'mismatched', as long as it is warm in winter, cool in the summer, that'll do me.  Gosh, I am getting old aren't I?  Great place, a local points out the bus stop across the road, and it is on to Alnmouth proper. 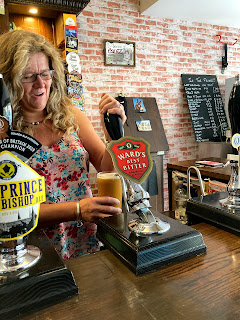 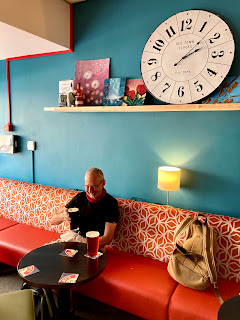 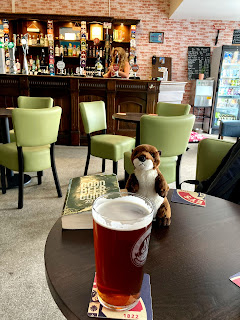 And I will tell you about that, Amble and Morpeth on Sunday night.  Early night for me, I've got a big BRAPA day on tomorrow.