I was rapidly deciding I didn't like Wivenhoe, despite my initial summation of it being up there with Foweys of this world.

The Black Buoy had been irritating, the foot ferry to Rowhedge wasn't running and no-one seemed to know why / care, and now I couldn't even wait for a bus to Brightlingsea without this: 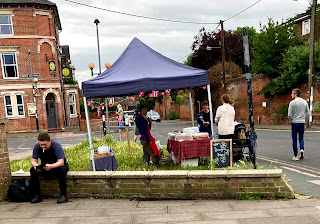 An impromptu Norwegian bakery stall forcing pedestrians onto the road, as the pashmina buggy brigade cooed over Scandinavian bread based wares like they'd witnessed Ethelred the Unready coming back to life and announced he wanted to change his name to 'the Unbready'.

I needed the next pub to achieve big, and luckily for me, it did, which you could kind of tell before entering by looking at it.  The shopmobility scooter obviously rubber stamping the deal. 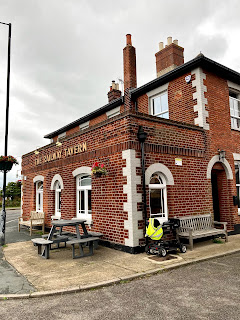 Railway Tavern, Brightlingsea (1836 / 3265) was an absolute joy, once I'd got the song 'International Bright Young Thing' off of my Smash Hits 1991 compilation out of my head, of course this version had new lyrics.  I felt like I was cheating, not entering the main bar where the vocal local yokel throng seemed to be in situ, but I needn't have worried.  I saw off the challenge of a miserable old couple who vanished behind a pillar, and never reappeared, and got chatting to two young geezers about all things Euro 2020/21.  They were proper sound ladz, but when one of them asked why Argentina weren't in the Euros (he understood why Brazil weren't), I honestly believe this was not incredible deadpan humour, but a reflection on yoof knowledge of world geography.  I know a lass, a very successful underwriter in L**ds, earns a fortune compared to me, but when asked to point to Spain on a map of Europe, she'd absolutely no clue!  The staff were perky too, the ale was in fine voice, and just when you thought it couldn't get much more quirky and amusing, Angry Toilet Cat did its best to block me off, and then rushed through the barroom door I'd opened, which I'm not sure it was supposed to, turning around briefly to miaow 'take that you sucker'.  Yes International Bright ling sea, this pub knew how to make my world swing. 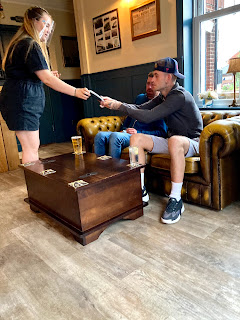 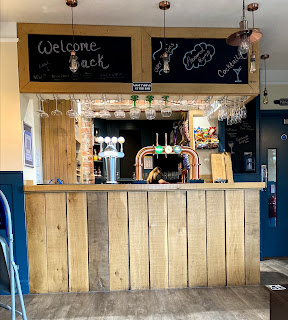 The bus coming back the other way, took me north of Wivenhoe where my other required pub was situated, on the main road, a nice unassuming out of town boozer in the 'Endeavour Chelmsford' mould. 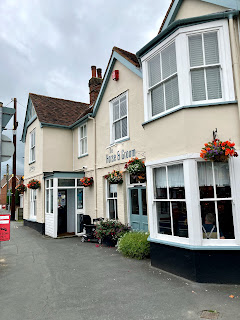 Horse & Groom, Wivenhoe (1837 / 3266) proved that even Adnams pubs can be amusing, interesting and heartfelt.  Not something I've witnessed so far on my travels, but Suffolk is a county which I'm sure will rock my world when I get around to it.  I have done Newmarket if that counts, but everyone knows it is only on loan from Cambridgeshire til the end of the season.  The locals were drinking well, not quite sure where the nasal accents came from, seemed kinda 'one step beyond' Essex.  Anyone could've buster blood vessel any second.  One claimed Thomas Muller was Gerd Muller's son.  The landlady was constantly keeping the cheeky old boys in check in that jokey naughty school ma'am way.  The bench seating was superb, a snaking plush red effort, reminding me a bit of a game I had as a child called Screwball Scramble.  The old bloke sat nearest me wasn't the chattiest soul, but we finally found common ground when one of the two pub cats arrived.  Hunter with the fluffy tail, his sister Harper failed to make an appearance, but two #pubcats in succession after months without one had me feline in good spirits as I went off to catch the Colchester Mouse.  Which might be the name of the local bus service, you know like the Yorkshire Tiger.  But isn't. 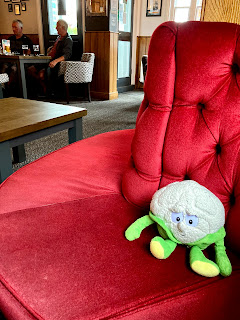 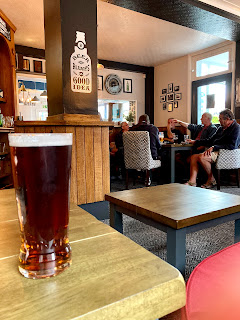 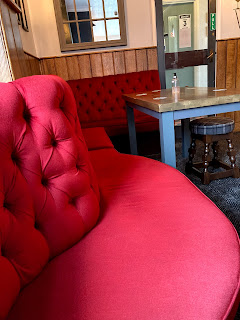 Back in the Colch, and a nice Twitter dude had mentioned a micropub called that might be a good pre-emptive for me.  Well, I pass this every day!  I'd assumed it was a small kitchen warehouse!  And was en route to my final tick of the night, so it'd be rude not to pop in, just need to remember I can order a half in pre-emptives ...... 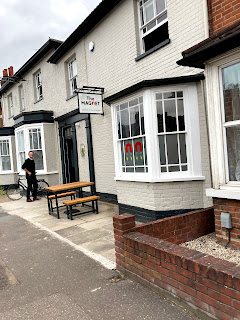 The bloke you see above had somehow spun his bike around as I crossed at the roundabout just before, not once but twice nearly taking me out!  He did apologise the second time around, and was still giving off some serious 'Giles from Buffy' energy at the bar in the Magnet, Colchester , his destination too.  Wow, what a fuss pot.  He stands at the bar before me, asking for try before you buy, and several other pointless questions.  If he was a ticker who'd broken the shackles of these West Midlands dudes with their beer towels, then I'm ashamed for tickers the world over.  At least I got to roll my eyes at a pretty lady (me being cooler and swarver than him of course), before undoing all my good work by mistaking the phrase "will you take a seat?" as "do you want a sip (seep)?" thinking I was getting the 'try before you buy treatment' now!  As the owner later tells me, the pub is still new and being 'done up' which I'm relieved about, as the smell of paint and blinding sanitorium whiteness was not filling me with Hope, which interestingly is/was a pub close to another Magnet, in Stockport  (I expect 5,000 page views for Stockport pub humour).  Thanks.  In fact, so dull is it (though a great pint, I forgot to order a half inevitably) I put my headphones in listening to listen to some tunes, before some edgy dude with links to 'the North' has a chat with me about Bradford pubs and a lost love. 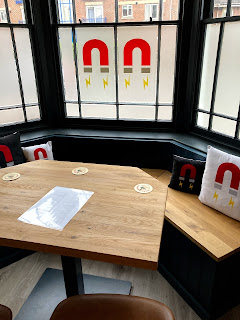 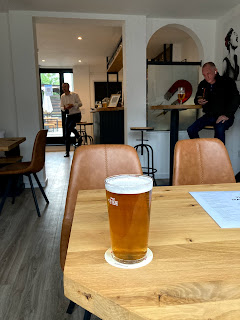 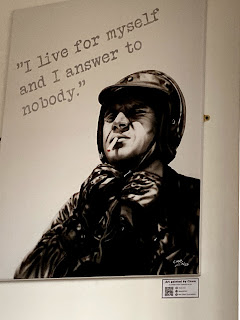 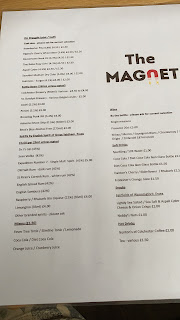 All relaxed and happy (i.e. pissed) by now, I'm delighted to see that the GBG pub closest to my Premier Inn is finally open, having been closed Monday and Tuesday, just in the nick of time.  It came highly recommended by all those who listed their favourite pubs in town, but after Wivenhoe, Littley Green and others, that didn't necessarily mean I was bound to like it ....... 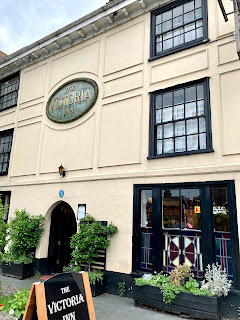 But sometimes the omens are good, and you know immediately you are in for one of those 'pub experiences of the year'. Here at Victoria Inn, Colchester (1838 / 3267) , the first sign of which, being that Colchester Brewery had a beer just for Yorkshire folk.  I probably should've produced my special Yorkshire passport for a discount.  Probably nothing to do with my increasingly intoxicated state, but the illuminations coming from the funky jukebox, glimmering off my pint and walls, are putting me into a kind of trance, the pub has a basic quality, but also a very loungey 70's feel.  It certainly 'felt' more nothern.  I was brought back into the present by a bit of football chat, courtesy of a long haired Spurs customer and our soon to be bar hero, a Villa fan.  I joined in with a bit of 'Hull City used to be relevant once, you know, for short while' chat, and the response wasn't too mocking, our long haired lover from White Hart Lane asking me to join him in Kernel Raspberry sour, the barman having already got us on a 9% Leigh on Sea SS9.  Leigh on Sea brewery later told me I should make BRAPA more 'interesting' for myself for drinking one of these in every pub.  I declined.  Curtains are drawn and now it has a real lock-in vibe.  Sort of magical.  Or I'm just drunk.  The barman and barmaid are such lovely people, she tells me she's in FOUR bands all at once, confusing, coolest of which is a swing band Andrews Sisters style thing, so I mention I love a bit of Glenn Miller.  I didn't think I'd be able to recall all this, perhaps I was more sober than I thought?

So I'd said thanks very much and goodbye, and made it the short 10 min walk back to my Premier Inn, thinking 'jobs a good 'un, Cambridge bound in the morning, time for some food' and I'm just having a piss, when my phone buzzes on my bed.  It is an unknown Colchester number.  But I immediately know who it is going to be and what they are going to say, without looking in my bag!

Yes, it is the Victoria, and yes I have left my GBG on the table.  Presumably I'd left it on my high up original table just before that nice man invited me to join him.  I'd not even greened up the pub, that's the irony!

I rush back, trying not to scare any lone people also walking in the Colch night.  They tell me to knock on the door as of course, they are locked now.  Additional thanks to whoever it was who suggested I put my name and phone number on the GBG inside cover after I lost it on that obscure station near Sheffield that time!  And how good are the Vic, for seeing it, having the presence of mind to look, and ring me immediately.  Imagine if I'd got to Cambridge?  Life savers, wouldn't expect any more from this superb pub!

Join me tomorrow, as I take an emotional trip to the town I grew up in.
Si