BRAPA in ..... HOMETOWN GLORY : SAFFRON WALDEN AND A BIT OF BROX

I'd done enough damage in Colchester.  It was time to give the town a break, and worry the inhabitants of Cambridge instead.

After persuading the receptionist at the Travelodge that I had paid an extra tenner to check in at noon instead of 3pm (as any self-respecting ticker would), I dump my belongings, pack a smaller bag, and take a painfully long winded bus to the town I did my primary school years in, Saffron Walden.

Yes, as a five year old twild / loveable young boy, I arrived in the pretty little market town with terrible asthma and a strong Barnsley accent.  In and out of Addenbrookes hospital for the next few years, a constant worry to my parents!  My sister was born in the same place.  I even made medical history, being the first child on record who had their growth stunted by the Becotide inhaler.  I'm probably supposed to be about 5 foot 11.  I was poked, prodded, tested for all sorts before they worked out the mystery.  At nursery, I was a bit of a recluse, having had so little interaction with other kids up to that point.  On my first day at R.A. Butler, I cowered nervously on the edge of the playground until Mark, the boy who'd become my best friend, ambled over in his chubby Labrador style, and said 'wotcheor', the most Essex 1984 greeting ever.  It was easier after that, I loved my primary school days, and in my little neighbourhood 'The Circle' (not a witches coven) playing with the other kids, having amazing times until that sad day in August 1990 when Dad got a job back up north.  I remember Mum telling me, as I sobbed on her dress at my grandparents, that I'd be attending Fulford School.  I couldn't say it.  'Falford' I said!  'Hmmm, needs work' she wryly replied.  I'd well and truly lost the Barnsley twang.  And back in York, I had to start again, with an Essex accent.  My English teacher picked on me to read aloud in class the entire first year.  When I finally plucked up the courage to ask why, he says 'because I sound different to the others'.

Sorry, this is supposed to be a pub blog, not a tinpot version of a Clive James memoir.

Despite all the friends we made, 1st July 2021 was my first time back.  I didn't think I'd remember much of the town, but from the moment the bus pulls into High Street, to every corner I turn in the centre, it was like seeing photos that had been trapped in my head all these years.  So weird!  Not much had changed apart from the odd Dominoes and Starbucks.  From the Waitrose where Mum saw that ghost, all the way to the common with its lame maze, and of course 'The Circle' itself, it was all so familiar.  Everything just seemed smaller.  I guess I'd finally grown! 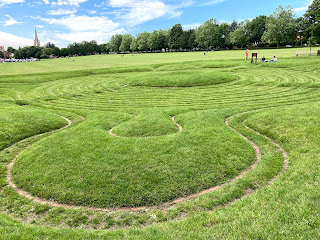 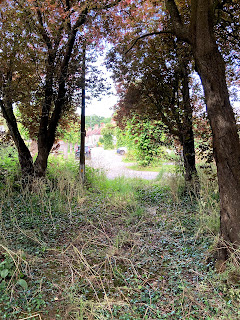 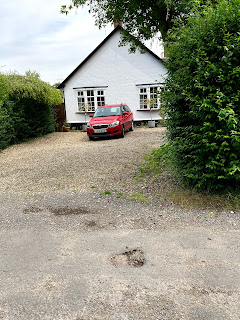 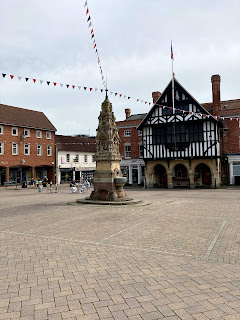 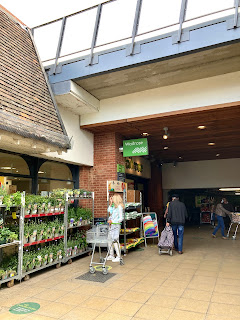 Feeling emotionally drained as I sat on the Common looking out towards town, I was not in the right headspace for pub ticking!  Uh oh,  I had to snap myself out of this.  Luckily, this first pub took no prisoners, and was exactly what I needed, a virtual slap around the face, in a good way. 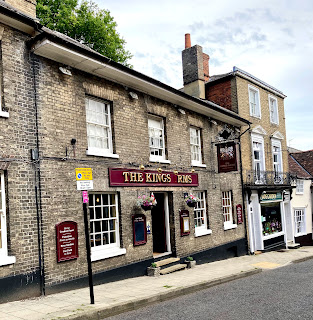 The missing 'A' should've been a clue, but if you think what a peaceful, 'lovely' little town it is, you might think the pubs would be a bit 'twee'.  Not a bit of it.  Enter the raucous, real life, in ya face, balls to the the wall, bloody boozer Kings Arms, Saffron Walden (1839 / 3268) , where more people said 'fack' and 'bagger' in the first 5 minutes than I'd heard in the whole of the Colchester area in the five days before!  The barmaid is chatty, we have a 'joke' about 'paying there and then, or putting it on a tab' or one of the many current shite pub restrictions which just make everything more difficult than they need to be.  A young simple dude tries to make eye contact, but he weirds me out a bit so I keep my eyes firmly on Colin!  Normal.  This group who must've been here since opening, are talking the most incredible levels of death n destruction.  It is life affirmingly paradoxical.   The lady saying how she had to stamp on a dying pigeons head so many times to kill it, and kept slipping because it had been wet underfoot, was one of the all time BRAPA great overheard pub stories.  Several others too which my memory has sadly repressed.  Eventually, they invite me to sit with them which isn't a total surprise.  I agree, partly hoping I might be able to link someone back to my days living here.  But after the main lady (who is determined I must visit a pub called The Eagle in Cambridge which I promise one day I will, something about wartime lipstick and DNA) reveals she grew up in Newport.  The man opposite sounds worryingly northern.  Macclesfield, he tells me!  Well, as much as I can relate to his tales of the Park Tavern being a top boozer, I'd rather he'd been in my year at R A Butler!  Oh well, they are all lovely in an insane way, so I give them the BRAPA deets so they can read this,  but I have another pub to get to before my bus. 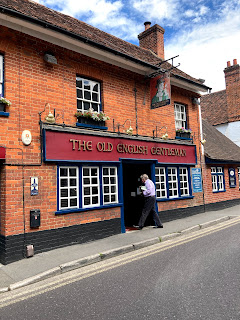 The Old English Gentleman, Saffron Walden (1840 / 3269) was a good solid, stolid old boozer, similarly bare boarded and no frills, but lacking the charm and quirkiness of the Kings.  Perhaps more customers would've helped, rather than just a silhouetted Geoffrey from 'Not Going Out' (I'd have preferred the one from Rainbow) staring judgily at me until his mate arrived.  The barmaid was moaning about how Corrs (not the band) had sent her a shipment of 40 Doom Bar glasses when they don't even stock the beer!  I'm just about to give her Martin Taylor's contact details, when I'm saved, by the flies.  Yes, I'm aware a few have been buzzing about the centre of the pub.  The barmaid reaches for one of those electric tennis rackets and 'ZAP!', swipes at the things.  She ain't no Radacanu.  Geoffrey and his mate tell her to improve her technique.  She only gets one properly, frying it in mid air above my Wherry, giving it a nice acrid insecty mouthfeel in the latter stages.  Stick that on Untappd ya bastards.  It was just the entertainment I'd been crying out for, and saved the pub experience. 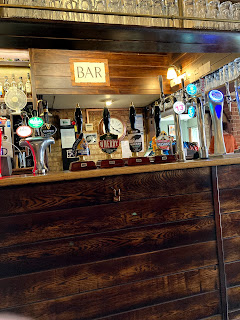 The bus taking me out to my village looks like it is going to be fun, judging by the assembled crowd waiting.  A colourful lady who must be in her sixties herself, resembling a posh Stabilo, hanging back with me, tells me out of the corner of her mouth that she experiences this every day, and we'll have to be patient as the old duffers get on!  A bloke who seems to know everyone, Essex's answer to Alf Stewart, tries too hard to chat her up. 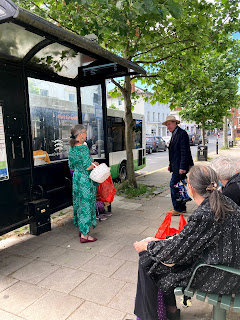 But by the time we reach the obscure village of Broxted, I'm the only customer left on the bus and my mood is low.  I honestly think my Saffron Walden took it out of me mentally, but this next pub does little to help! 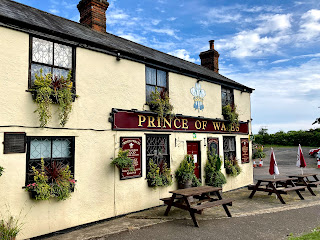 Prince of Wales, Broxted (1841 / 3270) should have been great.  Essex, village, old fashioned (to a point), the ingredients were all there, but a student took them on Ready Steady Cook with a pot noodle, mixed them all into a pan, and ruined the whole thing.  That'd be my analogy anyway!  Remember our fellow pub ticker Eddie from earlier in the week?  He'd been here today, great chat with the friendly guv'nor he says, he even paved the way for my arrival saying another pub ticker was in the area!  So that made the lukewarm reception even more galling.  True, I was served by Mrs POW, though Mr POW was always hovering, he didn't clock me at all.  The locals were all spaced out (in more ways than one) in a row on tables in the main bar, meaning I had no choice but to 'go around the corner', out of earshot and sight, half hidden.  I had to nurse my pint for an hour, due to bus times, so was here awhile,  and whilst the staff often came to my side of the bar to do some glass cleaning etc., not once was I acknowledged, even with a nod.  Very un-Essex, locals same on my many loo trips!  Table 13 again, unlucky for me.  And let's face it, the pub interior didn't have quite enough character to carry it alone.  One Twitter follower had a Broxted theory.  The locals have never recovered from Stansted Airport being built, the flightpath of which goes over their village.  They now hate all outsiders.  I like it as a theory, makes me feel less alone.  Even waiting at the bus stop, two old blokes on benches just glared.

Definitely my low point in my week in Essex. 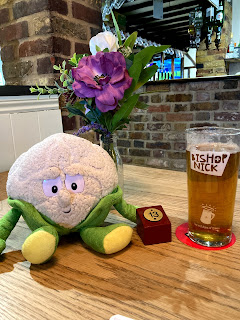 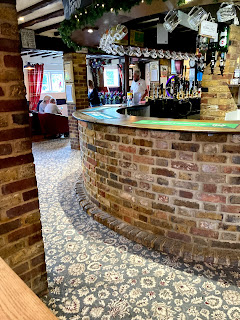 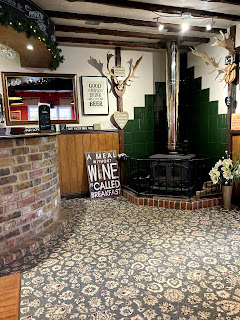 Such relief when the (delayed) bus final rears its head.  Surely things can only get better from here?

Join me tomorrow (or Sunday, depends how drunk I am after my six pints!) to find out, where we'll catch up with the afore mentioned Martin Taylor for some Cambridge fun.