Still annoyed by the mess I'd made of Colchester pub ticking the previous evening, I was in determined mood to have a productive final day in the area.

Sustenance would help, and as I stepped into Manningtree station buffet seeking a coffee, snack and a bottle of water (possibly a former GBG entry says my mate Tom, it did have empty handpumps), I stumble upon a selection of bottled ales and freshly made sausage and egg rolls, which definitely makes sense. 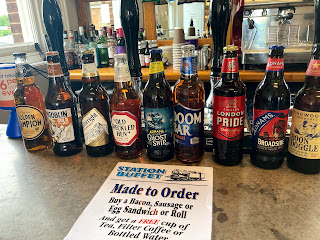 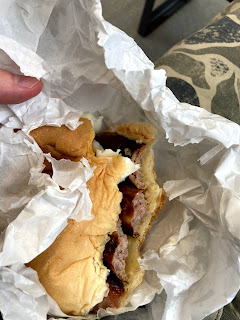 I've decided I like Manningtree station more than most: 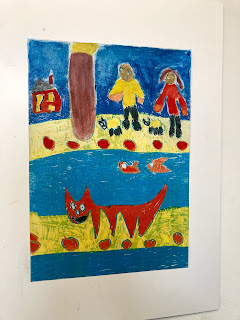 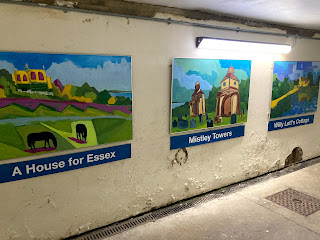 I'm here to change trains for Harwich, a superb salty sea dog 'end of the line' style place that makes Hull's old town look like the spawn of an unholy alliance between West Didsbury and Marlow.

A quick glance at one of the two GBG pubs confirms what I already know, it has closed down.  Time for the bit where I act sad that ANOTHER pub has had to CLOSE down indefinitely, whilst secretly being partly glad it is one less 'tick' I need to worry about.   The brutal truth of pub ticking. 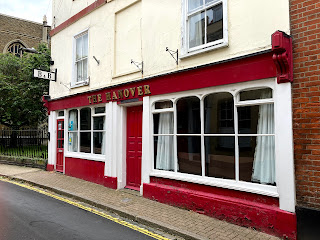 Apart from the odd decorator and bloke on a roof, I don't see a soul.  The seagulls screech as I step up to photograph the open pub ..... 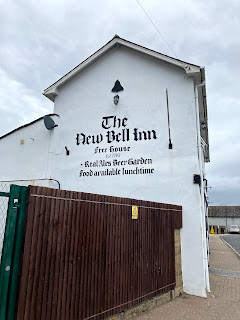 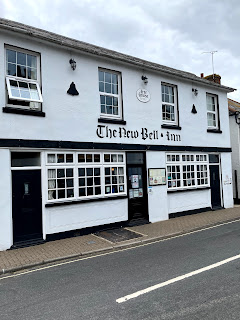 Although the pub looks a bit too 'tidy' from the outside, I only have to open the door of New Bell Inn, Harwich (1833 / 3262) to see that it is exactly the kind of pub I enjoy.  Two wonderful Cap'n Birdseye/ Santa Claus old sailor types immediately tell me to order a pint of the Oscar Wilde mild because it is what they've been drinking for years.  I sit with them, which later becomes awkward as one of their local mates turns up and the barman has to warn him 'there's someone in your seat!'  I offer to move, fully aware that a one-time visiting upstart like me holds no jurisdiction in a pub like this,  but he's happy where he is.  The softly spoken seadog is telling me about his days as a cider maker and distributor around the country, but he is very hard to understand, and lip reading is tricky as his beard is in the way!   The staff are moaning about the lack of trade, as I'm witnessing a lot recently.  The locals tell them they COULD open Tuesday's you know, relating to a recent decision to shut the pub on this day.  They tell me they've been coming here for what sounds like centuries, every day!  Well, the Mild has slipped down well, I thank everyone for their hospitality, but I have a train to catch. 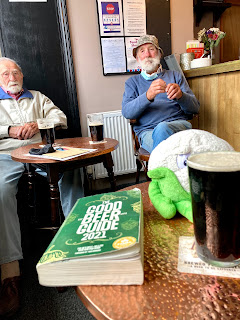 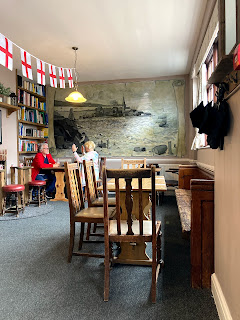 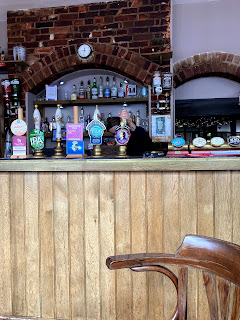 It makes just as much sense to get off the train at Mistley as Manningtree, the pub being equidistant.  It might've been Eddie who told me this, Tom Irvin, or an apparition that came to me in the night.

Anyway, I've made the right decision as a very nice walk follows looking out onto the River Stour.  Everyone is sat in their cars eating sandwiches looking out at me peculiarly.  Possibly they could see the desperation in my eyes, searching the estuary for that elusive Pochard duck which I will see one day. 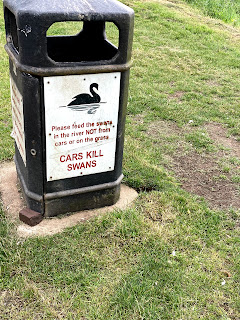 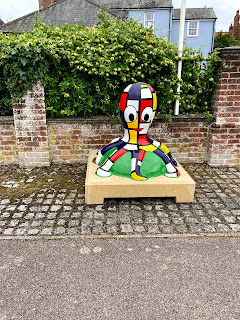 Up a hilly side street just as we come into Manningtree, the pub is buried at the far end ..... 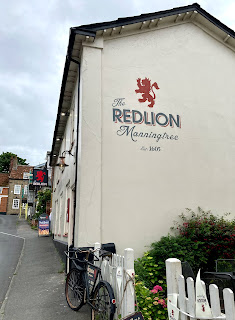 Red Lion, Manningtree (1834 / 3263) makes it two brilliant pubs out of two for the day.  Landlady Demelza (I googled to make sure I'd got it right!) greets me with the kind of warmth and friendliness that means she is definitely in line for a BRAPA staff of the year award, and in the BRAPA equivalent of the 'Hollywood Handshake' I let her wield the green Stabilo to do the actual 'tick'.  But not so fast, she decides it wise to sanitise it first with a good wipe!  She has a point, and Colin shifts nervously in his seat worried he might be next.  The main bar is full of locals, being guarded by what looked a very mean Staffie type dog, which gave an assortment of people called Martin flashbacks to certain ladies of our BRAPA past.  As time went on, even the mean dog proved to be a softie, and the toilets weren't up that way anyway so panic averted.  Needless to say, the ale, a wildcard from a place called 'Red Fox' was on top form.  Pretty much the perfect pub experience. 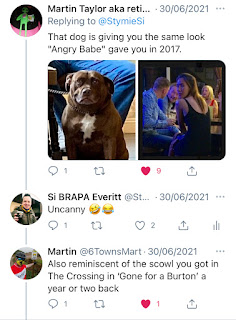 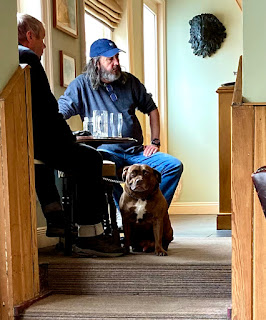 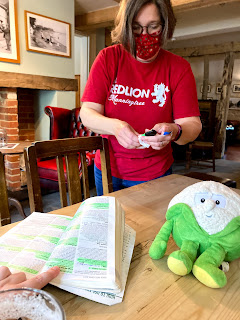 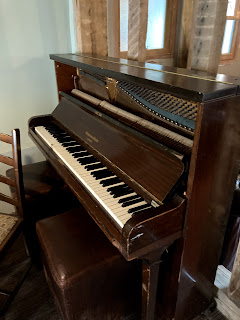 Onwards to Manningtree Station 'proper', where I waved goodbye to the fresh to order sausage and egg rolls (so technically, I was waving at nothing cos they don't exist yet), contemplated an unwise bottle of Badger Golden Champion, before getting back to Colchester, from where I changed trains for Wivenhoe.  Pronounced Wivvenhoe, not like Ivanhoe, which I couldn't stop doing all week as Eddie will remember.

What a beautiful little place, it felt Cornish, putting me in mind of a Fowey or a Mevagissey, and that is a complement.  The first of two pubs had been recommended by a few I spoke to, so probably no surprise I found it utterly infuriating. 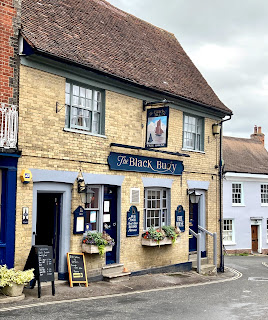 Black Buoy, Wivenhoe (1835 / 3264) is the name, and I'm greeted by the now familiar blackboard screaming "WAIT HERE FOR SERVICE".  Two incredibly animated train spottery locals, whose decibel levels reached 'eleven' as time went on, wish me a cheerful hello.  The only other two customers are a middle aged tourist couple keeping their heads down.  Five minutes has gone by, no sign of a staff member.  I perch on the nearest stool, hoping I'm not breaking the rules too much!  Another three minutes, and this is getting ridiculous, I need the loo of course, so I go to explore, and in the deep red painted back room, resembling a 1930's Parisian brothel, I find FOUR staff members, all slumped on these low leather settees.  They are fully clothed.  They blink up at me, smiling.  "Errrm, I'm just after a pint if that's ok?" I enquire.  And after an awkward 0.5 seconds, the closest lady heaves herself up and serves me a Colcester Pogbasaurus (or at least that's what I called it).  She even offered me 'try before you buy', for the first time since about 2019.   I say no cos I'm not a monster.  One pub tradition I hope is consigned to the rubbish bin.  She's very friendly, don't get me wrong.  After that, I sit back in the main bar listening to the blokes chatting about Trainline ripping people off, and getting locals jobs done by difficult local acquaintances.  Right at the end of my visit, two nervous young ladies enter.  One explains she's applied for a job here, but has heard nothing back, despite chasing them several times.  She gets a vague fobbing off.   "No surprise there then!" says one of the blokes, muttering something about piss ups and breweries!  And it did strike a chord with my strange arrival here. 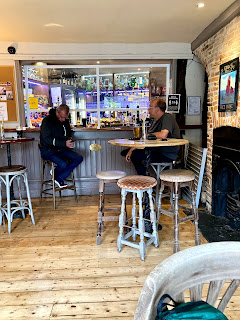 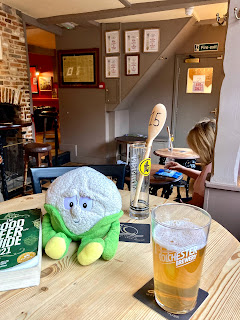 The plan now is to get the foot ferry over to Rowhedge.  It seems an exciting mode of transport.  A young skatery dude, laughing at a Twild which has just been made to jump out of his skin by a squwaking seagull, looks a jolly young soul, so I ask if he knows what the crack is.

He sends me up these wooden steps into the local sailing club, but even the local seadog is vague about things, all they know is it isn't running and it is 'probably Covid's fault before adding '...but then again, it was never that reliable and trying to send me on a wild goose chase of the local council offices!  Bugger that for a game of soldiers, I'll catch a bus from Colchester at a later date.

So with my Rowhedge tick firmly on hold, a bus to Brightlingsea is next on the agenda.

With news on that one, plus some embarrassing late drunkenness, join me on Thursday for "BRAPPY and Victori-ass"