Time to say a tearful farewell to the Sheffield bound Martin Taylor.  At my behest, I ask him to abandon me in one of the more obscure villages with a pub tick, and some pretty mean opening hours.  Being a Friday though, I was in luck.

As a parting gesture, he kindly takes my photo outside the pub, and even more kindly suggests I should mirror the Green Man's pose, which I try, failing to notice the two old ladies standing on the edge of shot, laughing at me.  Fanks a bunch Martin!

Martin drives off chuckling, and I enter Green Man, Toppesfield (1848 / 3277) where the two ladies are hovering by the bar.  They turn to ask me if I've finished posing, which piques the interest of locals and BM.  I can tell my entrance would otherwise have sparked an 'American Werewolf in London' vibe, so I'm glad of the icebreaker.  They even let me get served before them, suggesting I've earned it.  Joining a group of four other old ladies to make the magic group of six, they chuckle and smile sympathetically at me throughout, which is at odds with the watchful rest of pub.  It is a little bit of an unconvincing interior, not Ridegwell brutality, but not Belchamp joy.  The garden is deliciously deep and undulating, so I sit outside with my PumpHouse ale, brewed on site,  in the building next to the pub.  It tastes like an ok Greene King IPA.    I think I've been clever finding a shortcut to the gents through some patio doors, it feels a bit more like a house than a pub, and I don't mean that in the cliched but flattering "walking into someone's front room" sense either.  A man later locks them, waving at me with two fore fingers in the process.  Maybe it really was their lounge I'd walked into?  Whatever, a bit of an underwhelming tick, but being the only pub in with UK with community owned brewery and shop too, I'd expect many more GBG appearances, so a good tick to get knocked off. 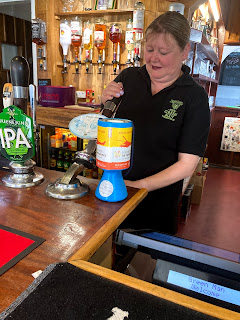 A much needed 3 mile walk along a peaceful country lane with the flutter of Meadow Pipits and a species of butterflies you don't get in York takes me to the 'nearest' bus stop, on a perilous hill just outside the town of Great Yeldham from where I catch a bus to the 2 GBG pub town of Halstead, which shares its name with a very nice Twitter man.

Just when I'm about to lose hope of it showing, it bounds around the corner like an over exuberant Twuppy.   It isn't the most relaxing bus journey, when we reach Castle/Sible Hedingham, it becomes the local school bus.  Aren't tweenage kids insane?  Me and the only other old person on the bus exchange nervous glances.

I press the bell by the hospital, tempted to admit myself, but instead I scurry downhill to the nearby pub. 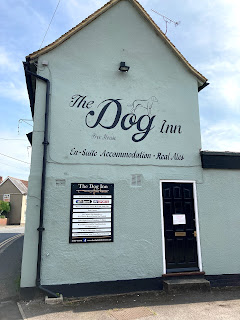 Despite the flouncy hand painted sign on the pub suggesting otherwise, the Dog Inn, Halstead (1849 / 3278) is a bit of a classic.  The gurgling of old blokes, the rattle of dominoes, standing room only in the main bar, I'm a bit like a rabbit caught in headlights until a kind young barmaid comes to my aid, reminding me I need to find a seat!  She (reluctantly) suggests the garden, I agree, but one look at it, by crikey, it is the longest, furthest away beer garden I've seen in my life!  I can't have her bringing my pint all this way, so I intercept her in the carpark like a cross between David Pleat and Brian Laws, and we agree that I'll sit in the side bar instead.  She seems to appreciate this, and when I've hurdled a mean French bulldog, and observed one bloke being 'sent to the corner' by his mate for 'being a prick', so do I.  Sad of course I'm not closer to 'the action'.  One Dad has brought two of the after school brigade in - soon it is Robinson's Fruit Shoots and Quavers all round in the lower snug.   Great stuff, the archetypal example of  'wot makes Essex pubs so good'. 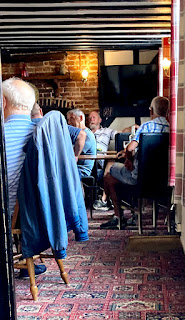 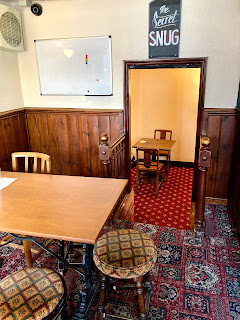 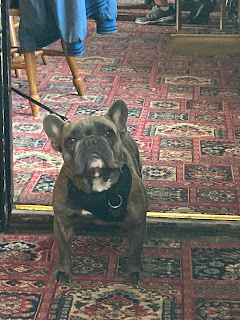 A walk around the corner takes me into the centre of Halstead for my final tick of the day. 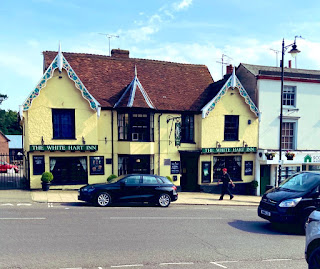 Considering it was pub five, I can recall the Dog Inn with amazing clarity, which sadly isn't the case with White Hart, Halstead (1850 / 3279).  The lack of human interaction is what did it, but I can feel every inch of the alleged 13th century history, a former coaching inn.  It creaks and groans as you walk through it, like it knows it is too old for this pubbing lark these days.  Like Toppesfield, it does its own brews, and the staff must be proud of this fact as they almost encourage me to come towards the bar to see the pumps and glance, 'from a distance' as Bette Midler once did, which I wouldn't say is unheard of pre 19th July, but certainly rare.  I sit in a dark corner, and after the strange case of two disappearing men (probably ghosts), I move around to watch the latest Euro 2021 match, Switzerland v Spain and the pubs old fashioned beams obscuring my view remind of lower league away games in the 90's where you had to crane your neck to see, before stadiums became modern and identikit.  It was a relaxing if uneventful end to a great holiday in Essex.

Time for a few days off.  Essex was looking a lot greener though I was annoyed Boreham, Colchester and Wivenhoe evaded me ..... 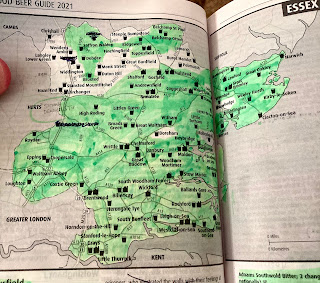 But still great progress, and it was time to sober up, watch a bit of Wimbledon (1987/88 football highlights with the likes of Terry Gibson, not the tennis) and have a fridge freezer delivered.
And then it was off to North Wales for three more days of pub ticking, which I'll try to tell you about tomorrow.
Cheers, Si