BRAPA in .... WE ARE THE CHAMPIONS, MY THAMES

The end of the previous blog found me in low spirits.  Broxted had unwittingly depressed me.  Could the Plough, Debden (1842 / 3271), the next village on the bus route back to Saffron Walden, cheer me up? 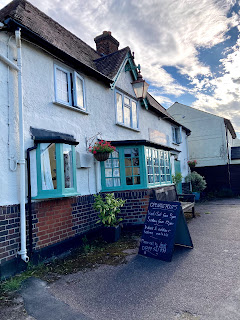 Well, it could.  In much the same way that listening to Leonard Cohen after Radiohead would cheer you up.  Barmaids beamed, chirped and squeaked encouragingly.  Punters sat outside had a bit of bantz with them, whilst blousey middle aged dining ladies just behind my eyeline were given exemplary service.  I, sat in the middle of the floor (not literally, they did give me a table - as was my legal right pre 19th July) with my pint, blinking up happily at anyone who crossed the threshold.  My jaw muscles tired after 27.5 mins of attempted smiles.  Colin made friends due to the curious table of strange creatures opposite.  The carpet gave me hope for the future.  And that was that.

The bus took me back to Saffron Walden.  I had 25 minutes until my connecting bus, and what should be situated between the two bus stops but a pre-emptive recommended independently by two different Twitterati whose opinions I'd trust.  Would be rude not to wouldn't it? 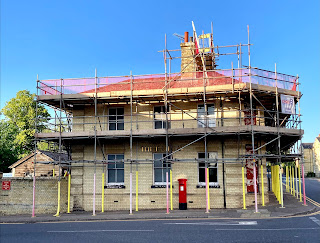 Railway Arms, Saffron Walden.  Considering it was being held up by scaffolding, I wasn't too disappointed when, standing on the gravel to the rear left having already had a large group of blokes go "wotcheor mate!" in true Saffron Walden style, a Scottish guv'nor approaches.  "Hoots mon there's a moose loose, aboot this hoose" he says (not really) before adding if I take a seat, there's an App to order from.  Uh oh, not sure I have time for this being against the clock n all,  but it's one of the easier ones to fathom.  My half Buntingford Stout goes down like a mole in a hole, the shed next to me look like it covers up a myriad of heinous past crimes, but isn't it nice to see the community taking ownership of an old pub rather than opening up another tiny little space in an industrial unit? 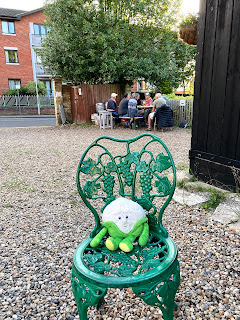 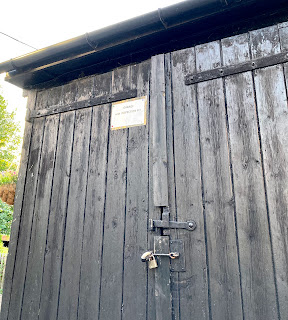 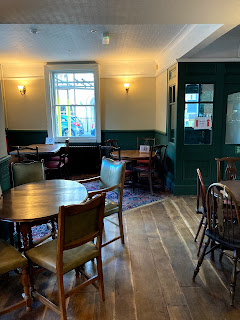 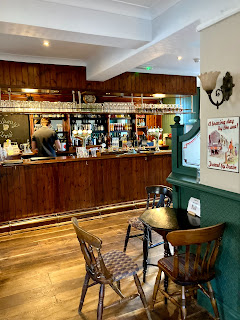 The bus ride back to Cambridge is as pain-staking as the one here.  My poor bladder is in bits, it took well over an hour, even worse as I was meeting the effervescent Martin Taylor and didn't want to keep him hanging on.
At 9:20 (fancy that), I jump off and cross this weird bit of grass called 'Christ's Pieces' which sounds more like a 1960's Batman expression.  'Christ's Pieces Batman, the Joker is getting away!' 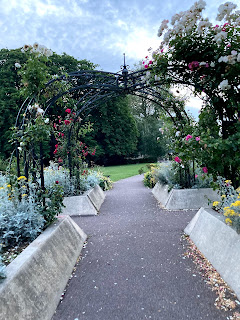 This next pub didn't feature in either of the two GBG's when I was on my 'quest' to totally green up Cambridgeshire, so I wasn't expecting much from it.  But as luck would have it, 'twas a bit of a corker! 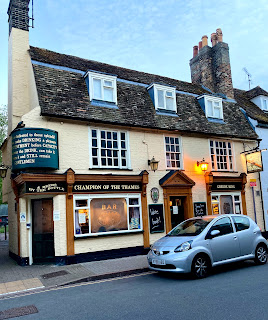 Martin is as good as his word, nabbing the prime table leaning against the bar.  Better still, the student quiz has finished.  Better better still, he's ordered me a pint.  Ok, so it is Greene King IPA, but a combination of the old fashioned pump clip, and everything else going on, means this might be one of the best GK IPA's I've ever sampled (and I don't realise til I'm into the final throes).  Champion of the Thames, Cambridge (1843 / 3272) , what a jewel!   It has an atmosphere which a kind of mixture of Cambridge's own Free Press, and Layer-de-la-Haye's Donkey & Buskins.  Being central Cambridge, everyone in a pub takes pride in being a bit odd.  Two vampires sat opposite (see below).  A man with a little scooter decided it made him more appealing, muttering saucy but mainly indecipherable comments to local ladies about sexing them up.  'Blog material' we both agreed, otherwise quite dumbfounded.  Cracking pub.

Martin walks me in the direction of my final pub of the night, determined to show off his encyclopaedic knowledge of the mean streets of Cambridge.

He takes the obligatory outdoor photo, and one for luck just to allow me to tilt my head a bit for effect ...... 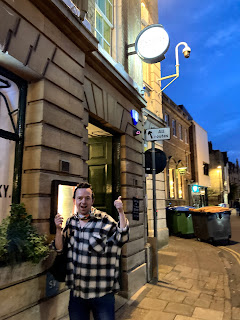 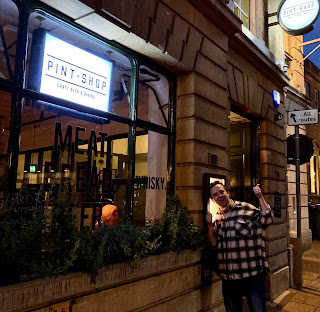 I ask him if he's joining me, but he looks at me askance as if to say "are you mad?"  He may've actually said that.  No, he's got to rest up before an even tougher BRAPA assignment tomorrow, which I will tell you about in our next edition.  So, I, Solitary Si, walk into Pint Shop Cambridge (1844 / 3273) and such is the 'winding down' atmosphere, I change my opening gambit to "I'm not too late for a drink am I?"  It is mainly rhetorical, and I'm ushered towards a narrow bench facing the bar, next to a group of students who think they are hilarious, which of course, everyone in Cambridge is.  As is often the way in a pub like this, there's about one cask ale on and a zillion keggy ones.  I get a Dr Rudi's Three Blind Mice in a tankard.  Murky, furry, sweet, a bit cheesy and blows my cotton socks off.  The loos are up so many flights of stairs, Wetherspoons would blush.  And I'm regretting my decision to leave my phone down there.  When I return from my expedition, the students have been allowed to move into the little secluded side room that I'd been eying up.  Grrrr.  So probably circumstances, but I can't say Pint Shop wowed me anymore than the chaotic Birmingham version, which may also have been circumstances.  And really, wouldn't Punt Shop be a more appropriate name?


Join me tomorrow, where Martin does what no other man could do, gets me to the Belchamps.
Til then, take care y'all.  Si