Okay, so that title is supposed to be based on former Oxford Utd flair player Joey Beauchamp, always great for me on Championship Manager '93 but frustratingly injury prone.  Not really worth it when you have to explain it is it?

So here we were, my final day down in Essex and everyone's favourite pub ticker and one of the world's nicest humans, Martin Taylor had kindly agreed to help me mop up some obscure rural outliers.

The sun was beating down hard.  He gave me the exact co-ordinates to the back of an industrial estate nearby (a bit like something the OCG would do on Line of Duty).  He ambushes me and rather than extracting my fingers with pliers, drives us in a Belchamperly direction.

Essex was greening up quicker than Bruce Banner when his milk's gone off, and it would get even better ..... 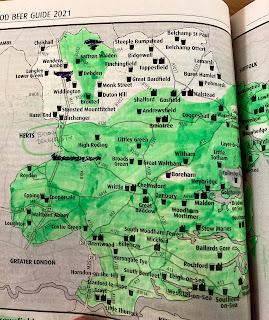 It doesn't get much more obscure than Belchamp Otten.  Even with all the technology in the world at our fingertips, it was a bugger to find, leading us to MARVEL at those early-days GBG tickers, before smartphones were a thing. 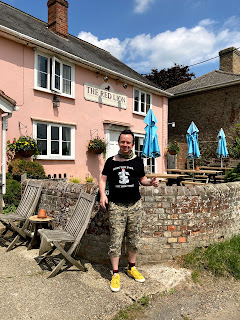 ... we didn't want to put pressure on them opening bang on 12 in case we jinxed it, so Martin did what Martin's do and started walking in a rurally direction.
We then got distracted by a recently dug trench.
I hate it when GBG pubs dig a BRAPA grave when they find out I am in the local area.
It was just after 12 now, and my stomach lurched a bit (probably the breakfast eggs n spinach), and then leapt for joy as Martin confirmed it isn't a mirage I see before me, the door is open!
Red Lion, Belchamp Otten (1845 / 3274) and the guv'nor is young and full of vim and vigour, as is the Oakham Citra which looks bubbly, and is one of finest pints I've had in July.  Martin asks the question on everybody's lips (well, mine and his, so 100% of the clientele), how DO you pronounce Belchamp?  'Belsham without the P!' says he.  "Ahhh, now we know!" I say out of the corner of my mouth, and aware that this line of conversation has been exhausted, mine host beats a hasty retreat to the benches out the front, where an old grump in a snazzy shirt has arrived.  He's probably been drinking here every day since 1752, keeping the pub afloat.  He even has his own Grade II listed heritage status around his neck, probably.  Indoors meanwhile, Martin is wowed by my lack of North Wales GBG ticks, thus planting the first little acorn in my brain of an idea for my second week's holiday.

Half an hour per pub is the strict rule I must keep to if I'm to do three pubs with Martin and have him drop me off at a fourth.  He has to get be back en route to Sheffield some time just after 2pm for his Cream Tea and Neepsend supper with Christine and those sk8 punk lads.
Our other Belchamp is bigger, and both chocolate box and picture postcard.  Village green, beautiful thatched pub, pond for dunking the visiting pub ticker since witches went out of fashion, Essex lunchers preening and posturing like they are really sumthin'.  Martin takes the photo and walks away from the pub.  He got this tick over 30 years ago.  (Hang on, doesn't that mean it has lapsed?) 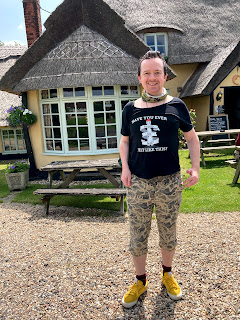 Bit of an intimidating entrance at Half Moon, Belchamp St Paul (1846 / 3275) with rusty ancient farming implements on the walls, enough to make your genitalia ache, but again, that could be the eggs and spinach on further reflection.  Considering there's MUCH food going on, I'm greeted warmly in that 'thank goodness for simple customers like you' (oi, who are you calling simple?)  I notice what a fabulous old musty smell the pub has, one that any amount of 2021 cooking cannot cut through!  In fact, the whole pub has a bygone joyfulness.  Even more remarkable when you consider the group of elderly flappers behind me.  The huge blackboard of specials is causing them problems.  The man wants sausage & mash.  "But we had it only last night!"  squeals his wife.  "Oh ... oh yes, I suppose we did.......  Haddock?" he replies, with the air of a man who has spent a lifetime keeping the peace with his other half.  She eventually replies she feels a haddock/headache coming on.  But the problems aren't over yet, as the more elderly crones in their group can't read the blackboard, and don't know if they are allowed to stand up and go closer.  I suddenly notice my 27.5 mins is up.  2.5 mins to have a wee, return my glass (illegal?), thank the staff, and find Martin. 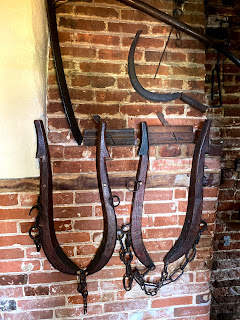 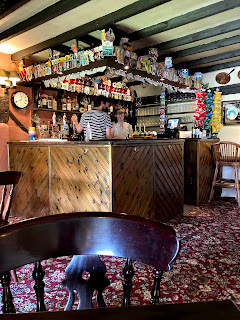 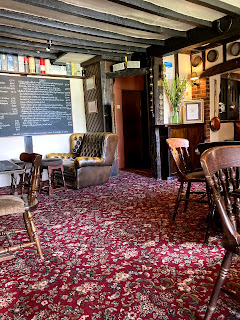 Idyllic as Belchamp St Paul is, Martin has swiftly come to the conclusion that it would be a boring place to live, and incredibly unwise if you were a pub ticker.  Not like you can trot seven minutes to a main line station is it?   Don't talk to me about trots today.  Egg and spinach.
Well, the Belchamp duo had done us proud.  A hasty amendment to the BRAPA schedule performed in our last pub has worked out that the hardest of all the North Essex village pubs was Ridgewell.  (I'm not saying Steeple Bumpstead is easy. but at least it has one infrequent bus!)  So that is where I asked for next.
Things had been going too well pubwise of late.  There had to be a decline.  Oh look!  SiFiPieFri? 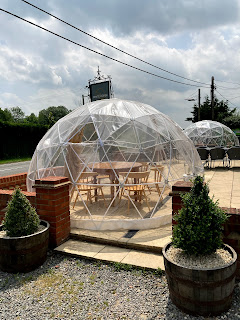 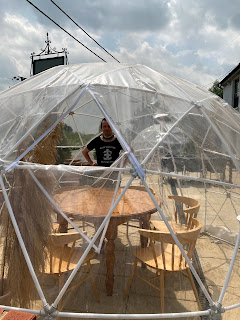 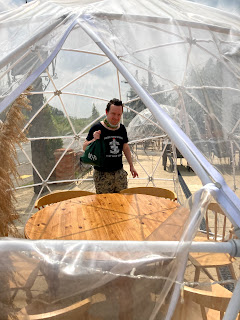 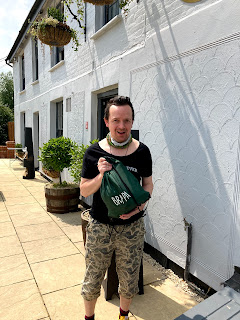 These weird contraptions were the first sign that all might not be sweet pubby heaven at White Horse, Ridgewell (1847 / 3276).  Actually, the second sign.  The first had been when I mentioned this pub to the magnanimous guv'nor in our first pub, the Red Lion.  He wasn't the sneering type, but he definitely sneered as he said "recent takeover .... they even do 'cocktails'!"  Takeover.  He wasn't kidding.  I don't know what antiquated pub delights used to be found within these four walls, but am pretty sure the pub that was put in the GBG wasn't this.  You could argue it wasn't even the White Horse anymore.  Certainly the Track n Trace App had its doubts as I scanned the QR code ....
I make to sit down in the front bar, thinking that the 'look' they have gone for is modern hipster minimalist.  Exposed pipe and brickwork, beer barrels, you know the type!  Sadly I didn't get a photo immediately as the barmaid shouts over that I can't sit in here, it 'isn't finished yet!'  You never can tell.  Funny actually.  Shame, the bit near the loos is particularly atmospheric. 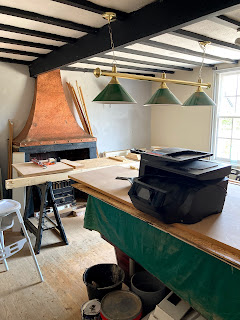 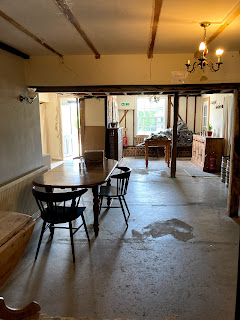 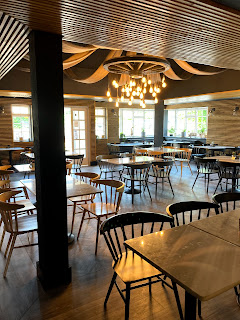 So the rather characterless outdoor drinking area is my only real solution, though if Martin hadn't have gone for one of his legendary strolls, I may well have knocked on the window of the Mart-Mobile and drunk my pint in there, much more pubby.   The staff are nice, don't get me wrong, obviously trying to put their stamp on the place.  But it doesn't feel at all GBG, and the ale quality isn't up there with either of the Belchamps.  Colin looked like a stunned mullet throughout. 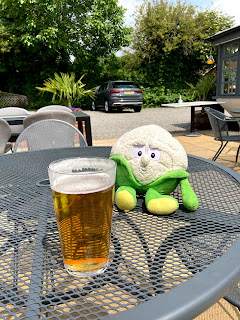 Such is my haste to get 'done', I actually have to wait for Martin to return from his walk.  I have one final request before his long drive home to Sheffield, can he abandon me in the seldom heard of village of Toppesfield?  He says he's happy to!  More on that, and a place called Halstead, and a new fridge freezer, in tomorrow's edition.
Sweet dreams, Si