BRAPA is .... THE ONLY LIVING SWEDISH UKRAINIAN BOY IN COLCHESTER

I was eating a Muller Fruit Corner (strawberry) at the exact moment Thomas Muller missed THAT chance v England at 1-0, so I am therefore taking full credit for the eventual win.

I slept for an hour post-match, allowing my pizza, Muller and Tunnock Teacakes x2 to digest, and any euphoric Colchester mayhem to die down 'a bit' before I stepped out into the charged atmosphere.

It made sense to start at the pub furthest from town, so I strode out in the direction of British Grenadier.  A few cars beeped their horns, pedestrians replied with 'wahheyyy', and some sang 'Three Lions' out of a window.

But when I reached the pub, bad news.  SHUT PUB ALERT.  A recent change to their hours meant it wasn't open at all on Tuesday or Wednesday now.

Scrolling down their Facebook timeline and sure enough, there is a post to this effect.  Sadly, the opening hours section on here, Google and WhatPub had not been updated to reflect the recent change.

Some students across the road went 'wheyyyyy!' in my direction.   'Not now guys', I thought, 'not the time nor the place'.

I carried on to another 'edge of towner', and a bit of a boom, boom, boom from a neighbouring hostlery told me I was glad this one was my destination instead: 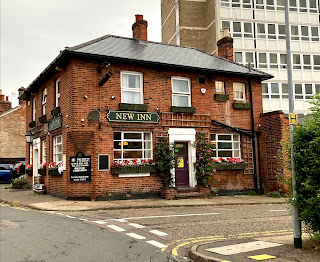 New Inn, Colchester (1831 / 3259) is a real vintage jewel in the crown of Colchester, and not one that anybody had mentioned on my travels, suggesting it flies under the radar.  Two groups of blokes are huddled around this bare boarded no frills classic, the furniture looks centuries old, the fittings are all worried and worn.  Two free tables have 'reserved' signs on, not in the 'foodie' way but in the 'if the guv'nor surfaces, he'll need somewhere to sit by the TV' kind of old school way.  I position myself between the two, pint on window sill, not really committing myself just in case.  Sweden v Ukraine is well under way, and it suddenly dawns on my that my yellow shoes, blue shorts, yellow and white tee shirt, blue jacket, and blue and white face mask makes me look some superfan of either side.  I think the punters have noticed it too, so I pretend to be fully immersed in the game.  Shall I speak with a Swedish or Ukrainian accent if push comes to shove?  The back bar sounds livelier than this, but being a proper old blokes pub, there is a rousing rendition of "Back Home" which makes a nice change from Three Lions.  Ukraine suddenly score, I wasn't watching.  I celebrate with a clenched fist.  Then Sweden equalise just before I leave. I celebrate by punching the air.  I'm both. 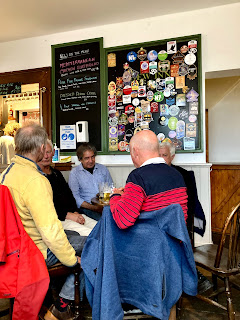 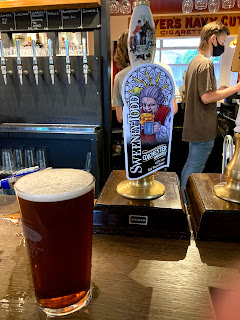 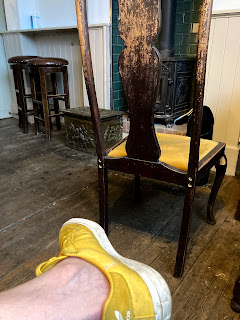 Just a couple of streets away, I pass the Fat Cat which I luckily ticked off back in 2008, as today it has people spilling drunkenly out of the doors into waiting taxis, and it all looks a bit chaotic!

On the other side of the road, I have a required tick though, the Ale House.  But I haven't considered closing times, and it looks as though the doors have recently shut ...... 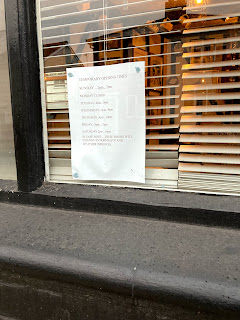 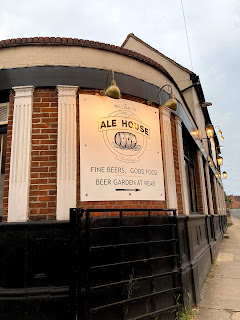 I can't wait for a bit of normality and weather, I tell ya!  After kicking myself, I figure I'll need to come back to Colchester for British Grenadier anyway, not to mention the town being a handy staging post for Boreham, Rowhedge and Tollesbury, which have all evaded me so far.  Ale House too, and then a cheeky sixth back near London, and that is a full day out!

Back in the centre, the drunken post-England vibe is still strong, and I have to squash down a narrow side street past this group of 18-21's, singing 'All Together Now' in what sounds suspicious like Yorkshire accents, hugging each other, bleary eyed, but jubilant!

My pub is a haven, even if the neon lights seem to bring its 1647 heritage into disrepute!  A pub called the Joiners Arms as long ago as 1764. 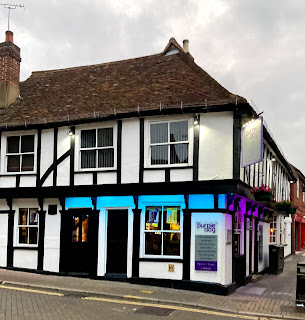 Purple Dog, Colchester (1832 / 3261) has, unsurprisingly, not the most exciting modern interior, but you can at least get some sense of the history in the shape of it.  Atmosphere wise, 'battle worn' is perhaps the best description tonight.  The two young barmen certainly look like they're looking forward to calling last orders.  The chirpier one seems relieved when I tell I'm just "one person on my own after one pint", my stock phrase 'in these difficult times'.  The ale is good, a few couples dotted around have their faces illuminated by the glow of the green football pitch (Sweden & Ukraine are still at it), but it feels like a place where people have come to escape the chaos.  Speaking of which, the 'All Together Now' gang pass the window, one of the girls taps on the glass and says 'hiiiiiiii' and the more fed up barman shakes his head and rolls his eyes.  I tell him "I bet you're looking forward to closing up" and his mouth forms a weird shape, like he's in lots of mental pain.  The footballers continue to battle it out, extra time is inevitable, and the pub groans as a collective when the ref blows for full time.  I'm offered a last orders drink, but he looks relieved when I say no.  Back to my Premier Inn so I can catch the end of the match.

Join me tomorrow, as I tell you about the Wednesday, my final day in the Colchester area where I might get drunk and lose my Beer Guide.