Okay, so fellow pub ticker Eddie F probably is too young to be considered Generation X, which I read you have to be born between 1965-80 to fall into, even I'm (1979) teetering on the millennial side.  I was trying to shoehorn in a punk reference, so you can't blame me.

Where were we?  That's right, leaving Weeley Heath by bus on Sunday 27th June, Colchester bound.  Time for one final taxi ride?  You betcha!

You'd think back in Colch, it'd be easy to find one.  It wasn't.  We found ourselves interrupting everyone from their mid afternoon kebabs before we managed to persuade a chap to take us to Layer-de-la-Haye, out past the old Layer Road football ground where I was surprised to learn Colchester don't play anymore.

I bonded with him over a shared appreciation of Cristiano Ronaldo, and a hope that Portugal would thump the overhyped Premier League heavy Belgians later that evening.  Not sure we got any money off the fare though.  Here was our 4th pub of the day ....... 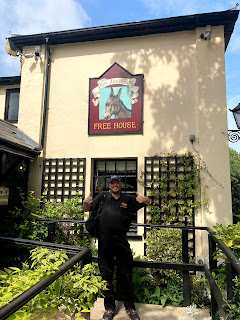 Three whole Essex pub people had told me, all independently of each other, that Donkey & Buskins, Layer-de-la-Haye (1819 / 3248) was not really up to much.  To that, I would say poppycock, piffle and apple sauce!  'Gastro' they'd said.  Nonsense, a strong contender for pub of the day and ask Eddie if you don't believe me.  We were seated in a 'MartinTaylorChampionOfTheThames-esque' table leaning against the bar.  The staff were chatty, the beer was top drawer, every woman was attractive ('NOT that that's a factor '#WokeSi2021) and the pub was traditional.  If people were eating, they were doing it silently outside the bogs.  Eddie spied a group of twentysomethings across from us, keeping their masks on at their tables, pulling them down only when taking a sip!  Neither of us had seen behaviour like this since masks were introduced last September.  "We like quirkiness here!" says the best barmaid as I introduce her to Colin.  She even gives him a dog biscuit!  He gave it a sniff, but says he'll stick to mini cheddars.  Super stuff from the D&B. 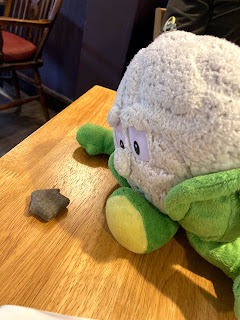 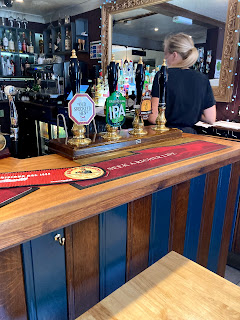 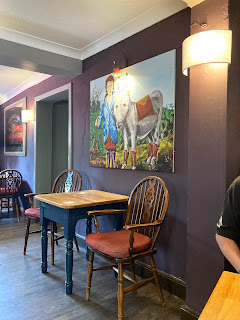 Feeling a tad guilty about our sheer amount of taxi'ing, knowing buses weren't forthcoming, plus the need to clear our heads and sober up a bit, we decide to take on the long walk to Stanway.  It is warm and muggy and my second 'layer' (thanks!) is killing me. 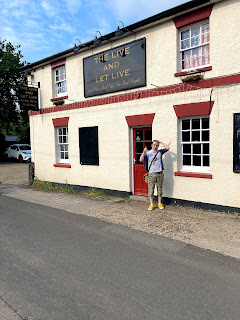 Yes, as you can see above, I was sweltering when we reached Live & Let Live, Stanway (1820 / 3249) nestled into a kind of unassuming backstreet estatey location, and we were not too bothered when the kind guv'nor tells us this is an 'outdoor only' set up as things stand.  That would affect most pubs ability to produce a quality experience, but like the Harrow at Steep last month, true quality shines through.  Our Sunday pub ticking really peaked here in Stanway.  A great pint of milk stout might not sound like the most refreshing choice after a long walk in the heat, but trust me it was great.  Colourful little chalets, a bearded dude in dark glasses trying to freak me out, nice chats with the boss (your forthcoming beer festival sounds great, but how likely are two pub tickers from Yorkshire to attend?  Not very), and a bustling happy locals hubbub.  I cannot speak highly enough about this one. 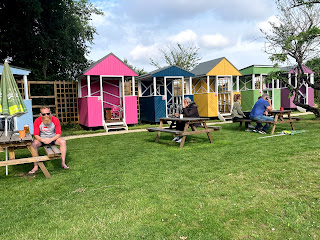 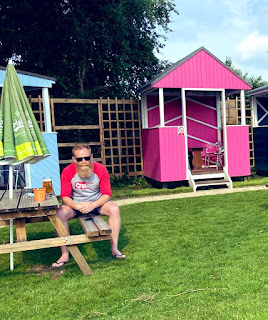 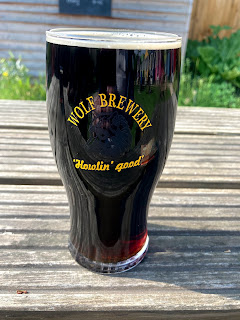 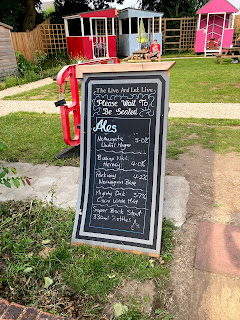 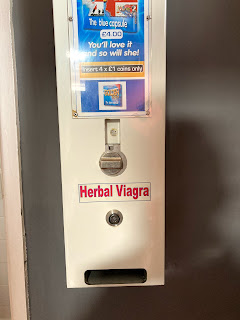 Eddie is strong on his buses so found a great shelter to wait for a bus back to Colchester:
Final pub of the night for me, and I think it was just as well.  Plus I wanted to watch Portugal at 8! 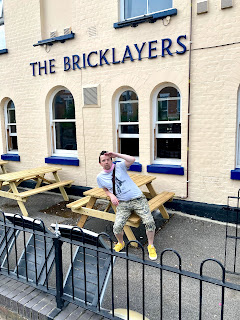 Bricklayers, Colchester (1821 / 3250) was my first tick in the town since a rained off football match on 19th Jan 2008 where I forgot to wear a coat but got the Fat Cat done and chatted to two local radio presenters who then texted me for years after, usually to slag off Ipswich Town, before Phil Brown drove past moaning about his tan fading or something.  My pubbing experiences were weird long before BRAPA.   Bricklayers was very uninteresting in every way but three.  Firstly, the staff uniform seemed to include ripped denim shorts (NOT that I noticed, and Eddie certainly didn't, he's engaged). Secondly, the doors to the loos were made out of the same silvery material you walk on when you are getting on a ghost train in Bridlington.  And thirdly, they'd laid out all the seating cinema style so the punters could watch Czech Republic stuff the Dutch.  Which was greeted with mild yawns from the local Czech community of Colchester.

Fast forward to Monday morning, and I was back with Eddie.  Our pub ticking research has led us to the same conclusion, the only pubs open in Essex at 12 noon on a Monday are in the middle of nowhere!
So after some arduous bussing, we got off the 42A and walked along beautiful country lanes in search of our first pub of the new week. 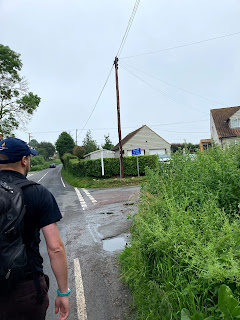 With the rain coming down steadily, we finally came to the remote village and with plenty of cars already parked outside, any fears about the pub not being open were allayed. 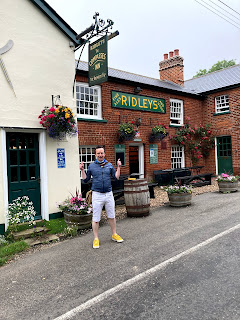 In an almost exact role reversal of the Donkey & Buskins, Compasses, Littley Green (1822 / 3251) came highly recommended by all I spoke to (including a couple in rural Derbyshire two years back) and yet I found it hugely frustrating.  The ale was good, well actually excellent.  The location was stunning.  Their 'huffers' (giant sandwiches) looked and smelt incredible.  But if you ever wanted a crash course in how to ruin a pub with stifling Covid restrictions lacking common sense, you've come to the right place.  Entrance door is wide open.  So we walk in, as one would.  And wait.  And wait some more.  Before we see loads of blackboards telling you to go outside.  We totter around the side of the pub to a gravelly area looking for this back garden bar or a staff member maybe, you know bit of guidance?  Two ladies faces appear in a kitchen window.  I smile.  Both glare back.  And I mean 'glare glare', not just a cute Lionel Blair stare.  We finally reach this giant tent/gazebo thing behind the pub.  Rules, rules and more rules, laminated, stuck to benches. Step by step.  You choose your beer/food, then go to this little outdoor hut.  A surly young bearded bloke tells me off for not wearing my facemask (I'm outside dude!), walking off without paying (assumed it'd be done at table), and seems unimpressed I don't immediately recall my table number.  13 of course.  Looking for the loos, the younger of the two female faces glares at me again.  Inside the pub, she comes in to glare some more.  "Where are the loos?", I ask.  She points at a door.  Doesn't say a word!  Bit like a horror film, but more boring.   I wonder if they are friendlier when total normality resumes?  I somehow doubt it, I guess they rest on their laurels of being a popular tourist pub in a pretty location and know dickheads like me will come no matter how they are treated.   York has plenty of pubs of that ilk.  None of which are in the GBG. 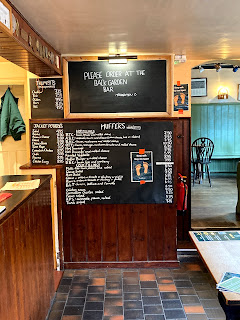 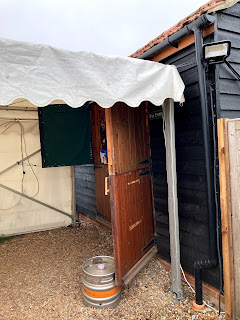 Being the bus legend he is, Eddie is not 100% sure the bus will stop where we hope it will as it has to go into this little inlet thing, but might actually speed down the main road.  But no problem, he's found a closer stop.  Problem is, it is down a muddy flooded track and my yellow trainers suddenly seem a rather silly idea.  All good though, it soon opens up into a dry track along the side of a field.
The bus arrives with a real sort of flourish, if buses can flourish, and a couple of stops down (passing the Green Man pub which will almost certainly be in next year's Guide) , it isn't long til we hop off again. 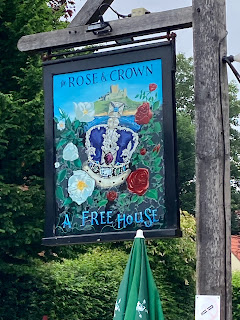 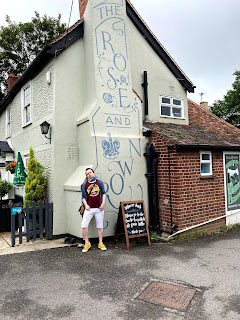 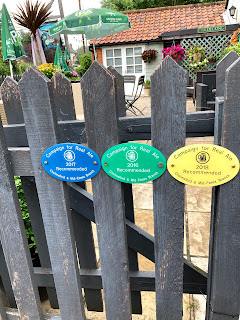 Another pub I'd been recommended, the Rose & Crown, Great Waltham (1823 / 3252) is something of a relief, as the two ladies who greet us are ace and not just in a 'customer service doing my job' kind of way, but genuinely friendly.  In the world of BRAPA, the warmth of staff is as important as the beer quality itself, sometimes more so.  It is pretty food orientated with everyone around us munching on something posh, quite an 'intimate' space too, but feels totally relaxed and normal for us just sitting here with pints (1555 by Ridley's, quality stuff) and a Cauli.  Table 13 for a second pub in a row, well I hate to be superstitious but this can't bode well for Eddie's taxi ordering later!  The tunes are classic 80's, the hand gel is Estrella based, and Colin's turn to do the highlighting. 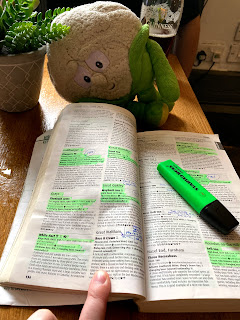 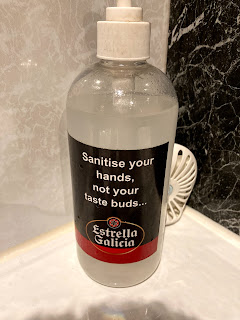 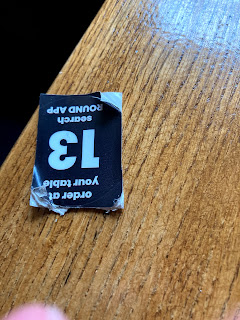 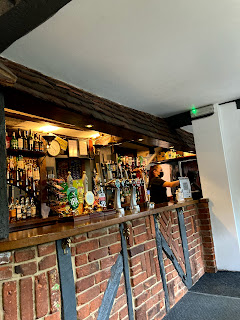 In the next village along, down some very tight country lanes only about 15-20 mins walk, we come to our final tick of this epic part (again I apologise for the length, ey up!, but I'll never get caught up otherwise). 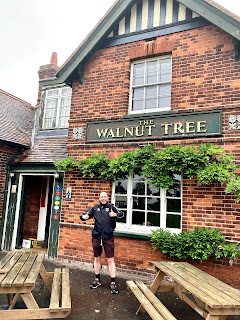 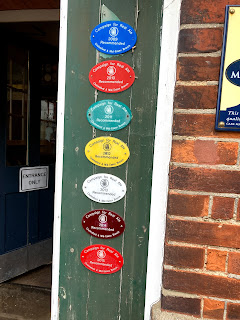 No one had spoken to me about this next one, Walnut Tree, Broad's Green (1824 / 3253) but let me tell you, what an absolute gem.  It felt like a relic of a bygone age.  It actually felt 'endangered' like a rare marsupial in Madagascar.  It felt like one of those West Midlands pubs you walk in at 11am and get a Bathams, corridors, multi roomed all with their own character, creaking doors that were designed to be closed.  It smells centuries old.  The guv'nor lumbers to the bar eventually, a lovely chap but deaf as a post.  Must be in his eighties.  Mrs Walnut pops her head around the corner, seems shocked to see faces she doesn't know.  Plastic glasses are the only downside, we suspected not so much a Covid thing as a 'washing up' thing.  Eddie has the task of asking him for a taxi number!  20 minutes later, he has written down two, explaining their regular one closed.  But Eddie has already made contact with a firm, having to explain about ten times where we are and where we are going next!  Some more customers are in the other room now, three of them chatting to Mrs Walnut.  They all have multi coloured hair and say hi as I go to the loo.  Superb pub, but I do kind of fear for its future (in an Anchor, Anchor or Farmers Birtsmorton kinda way) , and that saddens me greatly. 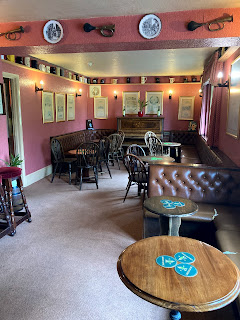 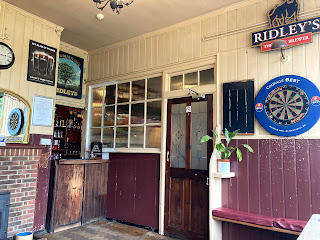 Having a night off tomorrow, might go pub ticking, so join me Fri for my final three pubs with Eddie, and then my first three on Tuesday where I'll head to the seaside!
Take care, Si