Not my words, but those of short-suffering BRAPA mascot Colin the Cauliflower when I turned to him a few minutes ago and asked him about that magical night of Friday 28th August.

Even more remarkable when I think back to the broken empty husk of a man I was, standing on London Bridge platform 6 an hour or so before.  The weirdness of Woodmansterne had taken it out of me, and a cup of cocoa and an early night was looking more tempting than three more pubs at this stage.

I stood like a zombie on the busy commuter-lined platform, watching trains and folk coming and going.  Places like Orpington & Petts Wood were on my radar, but in the end, I pulled myself together and opted for Bromley North, via Grove Park, which you might remember from a pretty disastrous Antic tick last summer.  After all, Bromley has three GBG pubs, so if I was successful here, it'll round it up to a perfect six.

The first sign that the stars were aligning to produce one of those special evenings was when a funny bloke introduced his six year old German Shepherd called John to myself and a poor unsuspecting young Asian businesswoman, with me basically throwing her under the proverbial bus by looking the other way and making her deal with 100% of the interaction.  John had never been on a train before, and the poor twoggy creature looked curiously as all these fast tubes of noise shot through the station.

Once in Bromley, I took a few gulps of the Kentish / South London air and aimed, as any experienced pub ticker would, for the more off centre pub first, short walk though it was into the backstreets.

The busy outdoor drinking area was the first thing I noticed at Red Lion (1825) followed by a feeling of relief as I entered a beautiful carpeted traditional local with gleaming original green tiling and a big bookcase lining the right hand wall.  My joy was short lived.  Before I could even sniff the bar, I was told they were at full capacity and I'd have to wait outside where someone would come to serve me!  What a shame.  A more churlish version of myself may have argued that if social distancing was the aim here, it would still have been easier to do it inside than out, but good I guess to see a pub observing rules on pub capacity and being responsible.  I still moaned about it to two local blokes and had time to explain BRAPA before their taxi conveniently arrived to let them escape, but I also told them it looked like they'd been here all day (only since 6pm in truth).  "Ho ho, those days are long gone" said one.  "Do you know anyone in Bromley?" they asked me, and when I said not, they looked worried for me.  I was eventually served by a friendly lady with a garish, flammable looking shirt, and with the cold evening wind blowing about, I shivered my way through a quality pint of Proper Job.  "Don't worry, we've given you extra bin liners for comfort!" she says, and I wonder whether she expected me to wrap one around myself as they were just lining the benches.  A lady asks if she can stub out her ciggie in the upturned plant pot Colin is resting on, and I contemplate how a pub like this will cope in the deepening winter months, without having to turn many punters away.

Despite the difficult circumstances, you could tell the Red Lion was quality.  Though as I made my way back down the street, I look wistfully at cosy indoorsy White Horse and wondered why this couldn't have been in the GBG ......
My next job was to get some snacks and soft drinks before I 'lost discipline' and although Sainsbury's was my original target, I saw one of those little Premier shops.  As I was getting served, she read my tee shirt and I spent the next five minutes explaining BRAPA.  Male colleague tries to join in with a "there's a very handy O'Neil's just up the street, you gonna go there?" to which she snapped "that's hardly likely to be in his book is it?"   Funny how some people get it quicker than others.
Also funny how the little things make you smile, make a difference, but this was just an example one of the many sums of the parts that make me think fondly of Bromley.
Back down to earth with a bump as I hit the more rowdy part of town, dusk now closing in, and the queue for Wetherspoons (thankfully on this occasion, not in my GBG) was snaking right back onto the street, like a nightclub.  This gave me even less confidence about my next tick, on the same street, which I suspected would be small, limited and my 'online research' hadn't even suggested getting beer to 'drink in' would be an option.   Luckily, I was wrong on every count ...... 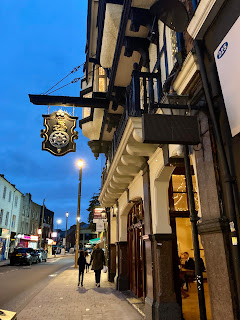 Star & Garter (1826) is no micro beer shop, it is a 19th century Grade II listed real ale lovers paradise with all the keg n cask blackboards that your beer connoisseurs love.  Personally, gimme a cosy sesh in a Red Lion any day, but to say that at this moment in time would've been churlish, as a kind young chap helps direct me to the cask ales without any of the usual pontificating, and how bloody good are those prices for this kind of venue for this part of the world?  Yes, it had been quite stripped back and modernised (well, no idea what it looked like 100 years ago to be honest!) but it had a cracking youthful atmosphere, and upstairs towards the bogs was the remaining 'pubby' part of the place, see below Watney poster and similar bits to give a nod to older times.  The amount of empties on my table I got by the back door showed me plenty of people had already been having fun here these evening, unless Col had been on a sly sesh whilst I'd been for a piss.  I was content with my pint of 'Roadie'.  Whatever, you couldn't help but smile.  Well, I couldn't.  One more to go, we can do this! 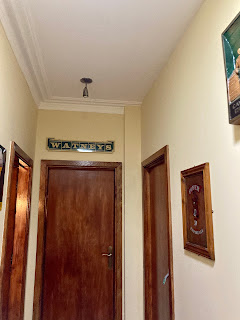 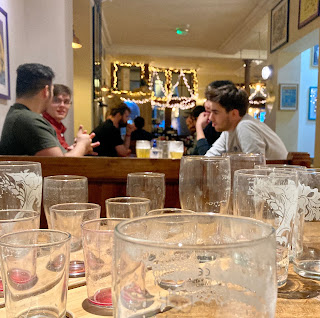 As I left, reflecting I wouldn't always enjoy such a place, I realised I'd obviously been seduced by the bright lights of Bromley.  Still, time to cross the road and give that 'Spoons a wide berth ..... but maybe the queue is subsiding by now .....
My final pub was the Fuller's House, and I felt a bit more confident going into this one as, the ones which have reopened at least, seem a pretty well-drilled operation. 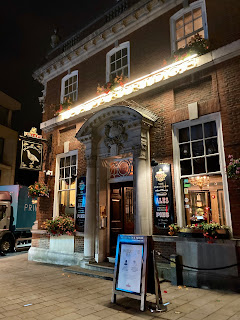 And such good service I received in Partridge, Bromley (1827), I felt like a VIP as I did the awkward 'hover between sign that says to wait here, and bar' and this genial chap who reminds me of a man of the cloth (which cloth, I'm not sure) swoops down on me, and puts me in this very conspicuous red leather armchair facing out into the whole of the pub.  It felt like I was at the head of the table, and if this was Christmas, I'd be carving the turkey for everyone.  No wonder a drunk blonde Susan Boyle and her hubbie shout across "you done well there, you look very at 'ome!"  Well, that's only the half of it Fake Subo, because on asking what ales are on offer, he tells me ESB is back.  First Turkey Twizzlers, now ESB.  What's next?  A new Dire Straits hit single?  Oh yes, perfect armchair to drink ESB in, perfect time of night to have it, and this must be amongst the first batches of it back considering what I was told down in Surrey.  After then declining her kind offer to buy everyone in the pub a drink, I lean back a bit further and observe the glorious glittering chandeliers and dizzyingly high ceiling from my strange vantage point, with muffled yet tinny background noise putting me into a Bromley induced reverie.  Oh hang on, actually, I'm probably just pissed.  Nice way to end a strangely great evening. 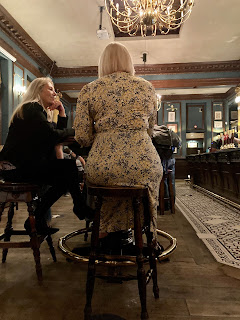 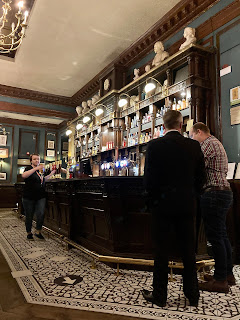 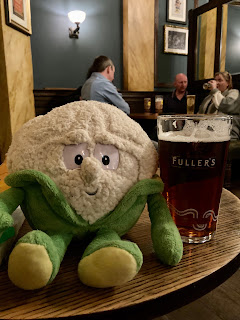 So there we go, I walked back to the station and couldn't feel a thing.  Just the way I like it.  Can't remember getting back to East India Quay but I managed it somehow, the snacks i'd bought earlier still in tact, for a nice nighttime 'fuddle' to keep me sustained so we could do it all again tomorrow!
And let me add Bromley to my top places in the UK list, what glorious folk and some pretty decent boozers too.  Will be more than happy to go back if the need arises, which I'm sure it will before I tick my 4,500th GBG pub in year 2043.
Join me for part 3, unexpected Kent coming up.
Si 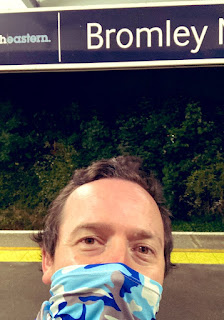