August Bank Holiday weekend started a day early in BRAPA-land, as I booked the Friday off work for three nights down in London for more South Eastern pub ticking, my new modus operandi, since 4th July.

As I struggled to squeeze everything into one giant rucksack, it looked like it might have to be a two-way toss-up between Good Beer Guide or Colin the Cauliflower.  Sophie's choice? 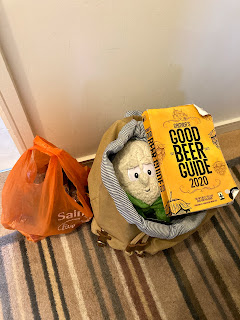 Luckily, I managed to squash both in (of course I'd have sacrificed Colin, but we don't need to tell him) and I was down on the London Underground for 10am, too early to check in, but no worry because one of my three remaining Central London 'ticks' was open and looking rather majestic in the morning sunshine. 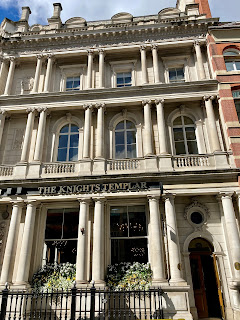 Just around the corner from the famous Seven Stars and its 'ruffed' cat, it might be a surprise to many to see Knights Templar, Chancery Lane (pub 1822) the preferred option in the 2020 Good Beer Guide.  Limited weekend opening hours are the reason I hadn't been here 'til now, and this plus the total lack of mention of it in the GBG meant I was surprised to realise it was actually a Wetherspoons.  It certainly is one of the prettier ones, very ornate with a painted ceiling, columns, spectacular curved toilets, chandeliers and who knows what else I failed to observe.  All overseen by a knight behind the bar.  The temporary coviddy perspex screens were easier to ignore here than most.  The Irish landlady had a friendly, dominant air about her, which made you feel you were in a traditional back street boozer, and she chased everyone around until they'd all test n traced, brandishing pencils and paper for those who looked like technology was beyond them.  The ale choice of Greene King IPA, Abbots or Doom was poor for a 'Spoons (Hobson's Choice had replaced Sophie's Choice!) but I must say, that most maligned real ale of Doom Bar was in better nick than I'd probably ever tasted, and I do attempt to give it a whirl when I go down to Cornwall, and dare I say better than the beer quality I've ever tried on my three trips to the Seven Stars.  Pretty much every customer had hi-vis on, ordered cooked breakfasts, and I felt lazy, like the only one who hadn't at least tried to tarmac a road that morning. 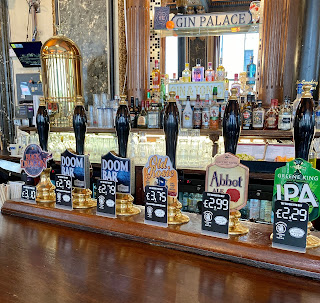 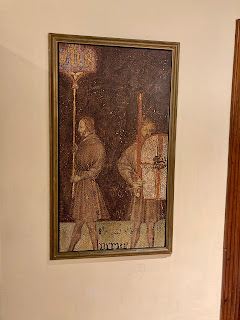 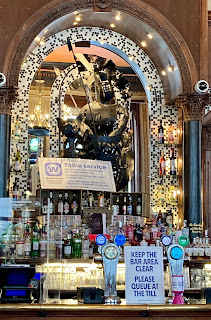 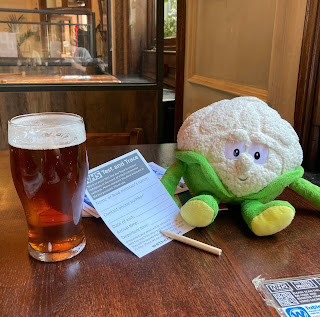 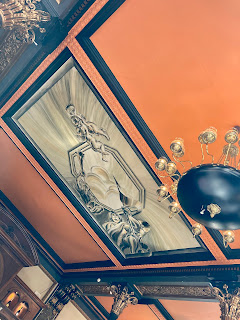 I got onto the DLR and was soon checking in to my super cheap Docklands Travelodge at East India Quay, not a great location in terms of the pubs I was looking to get completed, but decent links to Bank and London Bridge meant it wasn't too bad.

In a blatant attempt to get some good TripAdvisor feedback, the lass who checks me in asks me why I'm here and when I explain BRAPA, she stifles a yawn and hands me a card with her name and a smiley face on.  Had she asked me about the intricacies of getting to South Godstone, I might've left feedback, but alas not.

After a bit of a lunch and a quick spray of Lynx, I was back on the road (well, rail) to the first of five Surrey outliers I had earmarked for this weekend.

I jumped off at a place called Oxted where the locals looked irritatingly smug in a way rarely seen since Stamford, and headed towards first Limpsfield, and then across a golf course with a busy road running through the middle to find Limpsfield Chart.  Some wonderful human being had carved out a country path through woodland, to stop any terrifying road walking. 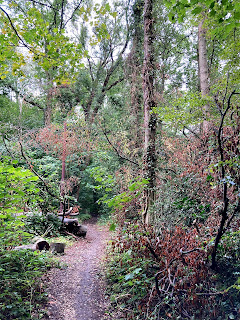 Eventually it opens out into a gravel track with some impossibly beautiful cottages appearing on the left, and the pub was just around the bend. 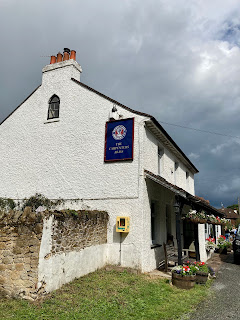 All the drama came in the first five minutes at the Carpenters Arms, Limpsfield Chart (1823) and walking in through the exit and straight up to the bar was always likely to land me in hot water in rural posh Surrey, but the young fledglings simply blinked at me in the hospitable manner and allowed me to complete my well rehearsed 'I'm just looking for a pint of real ale and to get out of your way' routine.  This seemed to be a Westerham pub, which hit home to me just how perilously close to Kent I was (more on that in part 3 or 4) and when the Summer Perle needed an awful lot of pump waggling to get it into my glass, a bloke in the far corner eating egg n chips called one of the more senior fledglings over to his table, to worried glances from the junior fledglings, and asked what was wrong with the pump, not before theatrically popping three chips in his mouth, and chewing slowly, pausing to cause a dramatic tension.  The situation was diffused/swept under the carpet, and i scurried outside with my excellent quality pint, having glanced around to see a lack of pub furniture and a few too many diners.  There was a very welcoming bench outside, and the outlook was nice, not to mention the weather, though five minutes later, the heavens opened, leaving me to exchange amusingly predictable pleasantries with the wet Limpsfield lettuces who were running for shelter.  I found a very handily timed rickety bus back to Oxted station, the stop was just opposite, don't you like it when a plan comes together?


A bit of jiggery pokery on the rail network eventually had me at Woodmansterne for one of my remaining four 'desired' Surrey ticks of the weekend.
NOT that the pub was handily placed for the railway station, and a uphill walk had me puffing and breathing before I entered yet more woodland.  A dog walker apologised as a canine jumps up at me with muddy paws and I laugh it off.
Now today really got interesting as I realised I was rapidly making ground on this distant figure with an umbrella.  Not wanting to scare the poor chap, I peered into his brolly and said hello.  He returned the meanest, scariest look, and had serial killer written all over him.  I scuttled off down the path, constantly looking over my shoulder.  He could do away with me here and no one would see or hear a thing.  Luckily, he disappears from view and I'd captured him distantly in this photo which might be a clue, if he didn't nick my phone, in the forthcoming murder investigation. 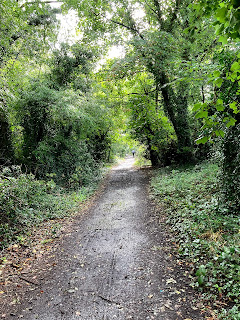 The track became thinner, slippier in the wet, and darker, and when it did come out on something called 'Manor Hill', it was such a breakneck pavementless danger zone at rush hour, I hesitated.  Luckily, a bloke about my age in his office gear, brandishing one of those 'Head' bags all the kids had for P.E. in 1991 overtook me and I tucked in behind him, walking along the road, this was obviously part of his daily commute.  However, who should appear out of the adjacent field but the Umbrella killer, just behind me, the three of us walking in single file into Woodmansterne proper!   Our commuter friend was a painfully slow walker too, but no way I was overtaking him even if I could feel the Umbrella Killer's breath on my neck.
When we reached civilisation with the pub a couple of minutes away, I strategically stopped to take a photo of this rather fetching carved sign, done by a woodman of Woodmansterne ..... 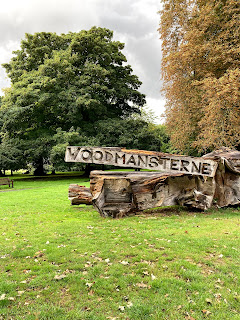 But our Umbrella Killer also paused, stood in the same grassy area, and then continued on when I did.  Was he REALLY following me?  I walked on even quicker, soon catching up our slow walking Head bag commuter, and guess what, he was pub bound too, he went round the back.  I tried to get in the front.  An angry looking ginger bald smoking bloke glared at me, but didn't tell me it was back entrance only.  Oh, and of course the pub looked like a mini Gothic castle to add to this sense of horror, at least Umbrella Killer seemed to have disappeared, for now...... 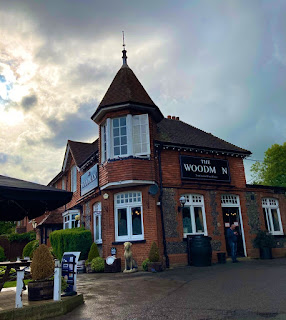 I snaked around the back, and followed the arrows into the main bar at Woodman, Woodmansterne (1824) hoping I could put the events of the last few minutes behind me.  I ordered a Harvey's from behind some perspex, the staff were a stylish bubbly bunch, especially the one in leather trousers wrestling with the noisiest coffee machine in the world.  Friendly bleached blonde dude with an element of the Goss brothers (not Jeremy) had just finished serving me when our Head Bagged commuter appeared next to me, and ordered a pint of Peroni.  How had I overtaken him, he must've gone for a slow piss to match his walking speed.  I sat down, and was astonished when the Umbrella Killer strides in and goes behind the bar.  He works here!  The bubbly staff say hi to him, he grunts in reply.  He looks at me quickly, then looks away.  Three incredibly fast talking and drinking Irish old guys are on the table next to me, one smiles but I'm traumatised and just want to finish my Harvey's and get outta here!  The angry smoker from outside is sat behind me now with a woman and a clipboard, so he works here too.  Jeez.  The pub itself wasn't particularly characterful, so now I reflect on this experience, I'm quite thankfully for the strange turn of events that defined my visit!

I didn't fancy that walk back so took a bus to Croydon South where I briefly entertained the idea of a long walk to a 'Spoons in a place called Selsdon, but decided with the rain still bouncing down, there must be a better option.
There certainly was, with bells on!  Find out about that tomorrow in Part Two.
Si