Isn't Twitter a funny thing?  I'd not even decided myself that I would tackle the four GBG ticks in Tonbridge (my Kentish BRAPA debut) when a guy, he didn't follow me, I didn't follow him, contacted me and says 'if you are doing Tonbridge, I've got this nailed on pre-emptive for you'.

So by the time I'm finished in my first pub, the excellent very beery Nelson Arms , it is decision time.  A SEVENTH pub?  Madness.  I'd turn into a pumpkin or something, surely.  But hang about, because BRAPA clause 14.3.1.1 states quite clearly 'you are allowed halves in pre-emptives and don't have to stay the full 25 mins'.  AND it is en route to my next pub.  AND it is nice to be sociable occasionally.  So off I popped to meet this Jon C fella.

Here it was, ignore the scary purple man who luckily wasn't off Twitter ...... 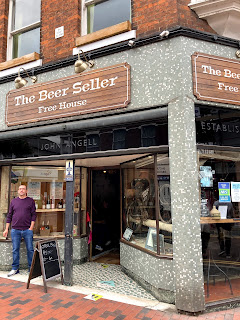 Beer Seller, Tonbridge and the name and font (see, I'm turning into Matthew Lawrenson, had to happen) the only things I'm not too keen on.  Doesn't quite do it justice.  Even though it does sell beer, and is nice & atmospherically lit like a cellar!  I'm scanning left and right, see if I can see a bloke who looks like his Twitter avatar, when I'm almost rugby tackled by this fantastic force of nature of a lady, huge grey hair like that boxing promoter of yore, superbly in control of all aspects of the pub.  If I hadn't been told otherwise, I'd swear she owns the place.  Her mantra is 'no standing at the bar!', and amazing how many brave souls tiptoed up there with line 'I just wanna know what beers are on'.  Loved her constant eye rolling and sighs of exasperation!  She sits me down facing the bar, as luck would have it, just across from the guy we are looking for.  Jon C ladies and gents, the first Kent BRAPA hero of modern times.  We chat, Colin being understandably neglected, the ale is top class, and in all these distracting beginnings, no wonder I forgot to buy a half and got a pint!  Jon doesn't work here but has been around since the inception so knows all the inner workings, he might've built it out of all these locally sourced warped bits of wood.  He is a carpenter right?  Or am I thinking of another J.C?  I tell him I'm impressed, more atmospheric than 90% of modern micros/bars, he tells me not everyone is a fan, and I can't help but think of the Crafty Baa in Windermere, which also divides opinion despite me thinking it was proper fab.  This is less quirky, well, until you witness the James Last love in the bogs, but for me it was a very pleasant surprise.  Rename it 'Santa's All Year Round Pisshouse Grotto' or the 'Dimly Lit Motherfricking Hen' which for me at least, would be a more fitting, if less catchy name. 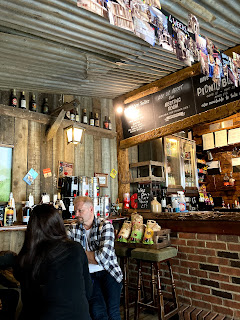 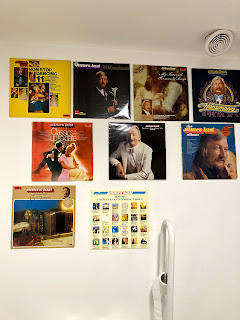 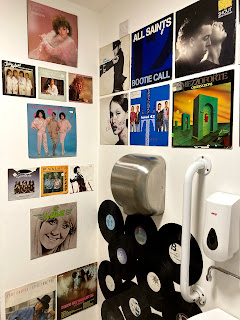 Yes, I'd be amazed if this one doesn't make the next GBG.  Jon obviously thinks I'm an okay sort, as he decides to join me on the rest of my Tonbridge crawl.
As we walk down the main drag to our furthest point north, my Mum decides to confuse my increasingly befuddled brain by sending me a photo of a microwavable dish she's bought me to see if it is okay for size.  Lovely of her, but she tells me it isn't blurred, I'm just drunk!  You can judge .....
Anyway, back to the present and the next GBG tick was soon looming over me ......

Fuggles Beer Cafe, Tonbridge (1831) had been mentioned by a couple of people as a place I should definitely go to, which being in the GBG, of course I would.  It didn't quite excite as the Beer Seller had, less pubby charisma, but being called 'beer cafe' perhaps a tell tale sign.  A hospitable sickly looking chap who looked like he'd been in a Polish bunker since 1939 did well to find us a table plumb centre of the room.  It was a bright, airy, expansive effort, with a jumpy lively middly twiddly aged atmosphere I grew into.  Think we chose our ales off a menu, but my memory was shot by now.  Downstairs spirally bogs is about the last thing I can remember.  Jon and I had some nice chats, and it suddenly dawned on me how many Pubmen are local to this area.  Paul Bailey most notably, 'the nicest guy you could meet' says Jon, as we planned a vague future trip where he drives me round more insane Kentish places like Cowden Pound, Dunk's Green and Chiddingstone Hoath, god knows how they pronounce them after the Leigh & Tonbridge fiascos.  What's more, a chap on my Twitter called Robbie has seen me walking down the street.  And earlier at Godstone station, an unknown person recognised me and went to Garibaldi at Redhill because of the nice things I said about it.  Tonbridge must be Kent's answer to Stockport in this sense.  Sorry Colin, but you may just become expendable if I become big in Kent! 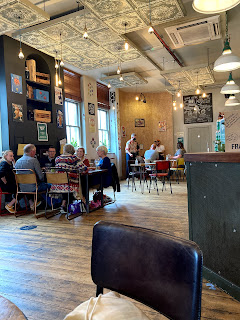 Back down the bustling main street from whence we'd came, with the castle opposite, crossing the River Medway which some of my fave bands sing about, Jon giving me a bit of history and a few facts on the town, I can at least remembering musing that the quality of life must be pretty damn good if you are a Tonbridge resident. 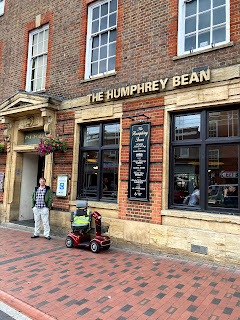 Jon was a bit reluctant with this photo, he didn't want anyone thinking the shopmobility scooter belonged to him.  But of course, the presence of one can only mean one thing ..... that's right, Wetherspoons time!  Strange to do one later on in the afternoon, Humphrey Bean, Tonbridge (1832)  is in the GBG for the 10th consecutive year, but Jon tells me always the most contentious entrant, because you know, some people just dislike 'Spoons for the sake of it.  One taste of the standard of ale should be enough to have people change their minds, glorious stuff.  Was it Oakham we drank?  Maybe.  Before that though, we wrestled our way to a table, fiddled with the online App, before Jon decided bugger that for a game o' soldiers and went up to the bar, so much quicker on this occasion though the App served me very well even pre 'Rona at Leeds' increasingly excellent Hedley Verity.  The perspex screens were out in evidence, the crowd was a lot younger, the carpet was beautiful, the outdoor area seemed surprisingly huge, but it is only cos I ramble on that I've been able to write this much about my experience here. 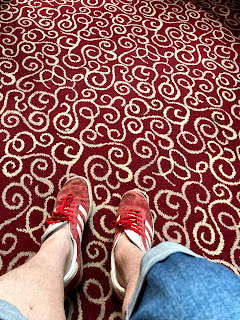 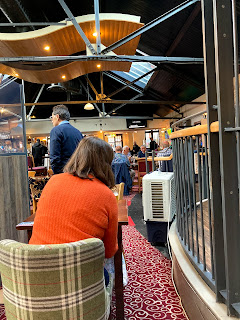 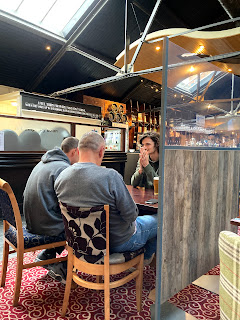 Time for one final push then before the train back towards East India Quay, and we carried on down the long straight, right across the railway station, and kept going, and kept going, oh god I needed a wee soooo bad, why didn't I go one last time before we left 'Spoons?
Finally it was there, nicely south of centre .......
My whirlwind Tonbridge debut had come full circle in many ways as we stepped inside Foresters Arms, Tonbridge (1833).  Being a bit off centre, the most traditional pub since the Nelson, and yet, like the Nelson's surprisingly beery bent, the Foresters had an unexpected quirkiness about it that even seven pints in was hard to ignore.  Not sure it was really necessary, but hey ho, I don't make the rules, and it was still a relaxed Shepherd Neame house, candles, pizzas and loud comic strips aside.  I think I can even remember we went for Master Brew, having chosen Spitfire in each of my Surrey Shep Neame experiences.  Did I tell Jon my hilarious lost fish joke?  Probably.  Is it a surprise I've got nothing else to say?   No.  Jon saw me safely back to the station, I fell asleep on the train, he drank cocktails by the river with some friends, really great day and thanks to him for being so hospitable and make sense of Tonbridge, which, despite the lack of something really old world pub feeling, has really given me hope for great Kentish times ahead after that unlucky Charcott start. 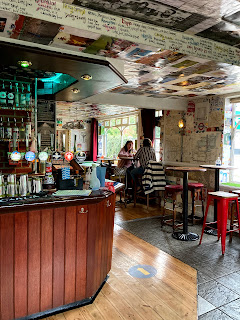 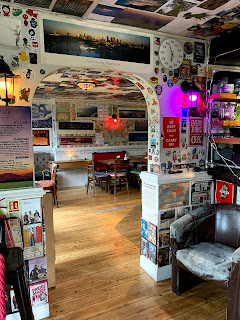 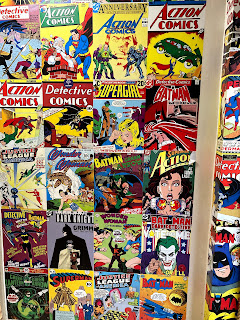 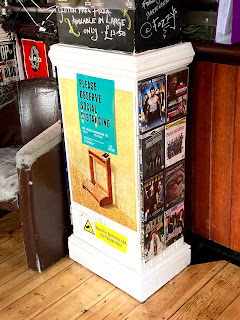 I had one more day left, and hopefully six more valuable pub ticks, which I will tell you about in part 5 tomorrow, and part 6 on Friday.
Thanks for reading as ever!
Si