BRAPA and ..... THE MASTER BUTCHER OF LEIGH-ON-SEA

Oh yes, you've got to love a bit of Carter USM.  And if I was to labour the blog title even further, you've also got to love one of my favourite Hull City players, Leon C ....... 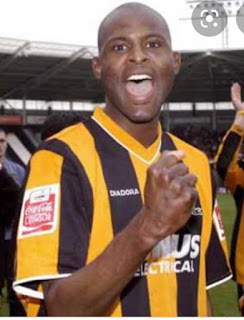 Oh I do like to be beside the seaside, and on yet another unseasonably warm mid-September morning in Essex,  I arrived to find a more unconventional, and therefore, slightly more interesting, estuarial resort with lots of boats stuck in the mud not doing much like a random pile of logs in a gastro pub. 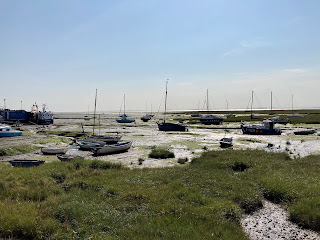 A peculiar route led me from station to centre and seafront, passing all these quaint weatherboarded cockle & mussel shops.  The day trippers were out in force, heavy old estate cars squeezing down the narrow road.  All were full of screaming Mum's shouting at sweaty stressy Dad's that they'd missed yet another potential parking space, whilst three kids squashed in the back are crying and hitting each other on the bonces with plastic spades.

I was looking for a pub called the Mayflower, but saw the other central Good Beer Guide pub first ..... 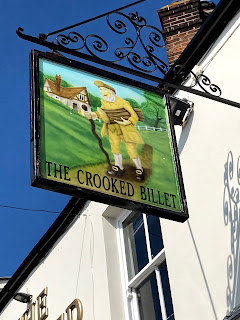 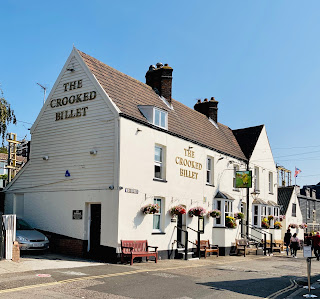 A bit confused at the lack of life emanating from within, I span around on my haunches to find a garden with a 'host'.  Turns out the Crooked Billet (1853 / 3070) was the most outdoor only affair since the pubs reopened (this being my 101st tick), even the loos were outdoors.  The friendly host gives me the Covid manifesto, and I park myself at a table and complete the obligatory form.  I ask what ales are on, only one, Rev James.  Oh dear I think, not a beer I really like, though most of my experiences of it have been in Ember Inns on bleak suburban roads on the outskirts of West Midlands towns at 10am.  I enjoy this pint of it more than I'd even done in even Cardiff.  You have to play the hand your dealt in this BRAPA game, and I'm just contemplating how much mileage I can get out of suspecting a window cleaner of being a burglar with a short ladder, when I notice the lady opposite clock Colin.  This is Sarah, who runs a retro shop selling 80's / 90's stuff including soft toys!  Her partner Jamie is a poet, and we get chatting.  Meanwhile, the broken card machine has been fixed so the staff can charge me now, having previously admitted that he was terrified of everyone running off without paying.  Jamie and Sarah are a lovely duo, and Jamie in particular seems happy to pack up his current lifestyle to become a pub ticker, such is his BRAPtastic enthusiasm.  He even offers to by me a drink, alas one pint per pub is the rules!  Jamie, being a poet, wanted to have blog input so he co-wrote this next bit.  "Jamie then produced Sarah's random Bounty bar from a sidepocket, to hearty guffawing from all who witnessed the event".   And on that note, it was off to pub number two.

Much like a real ale loving bear in Halifax, I meandered down the High Street and initially, my heart sank when I saw what I thought was THE pub hatch, crowded with ice cream gobblers.  Not a pint of bitter in sight! 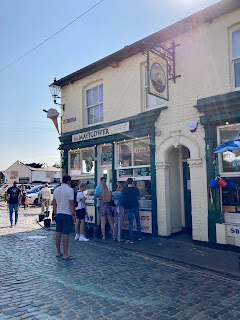 Luckily I followed the cobbled street around the corner and saw a much more pleasing sight ...... 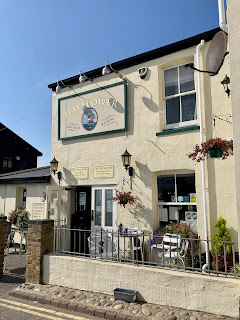 An actual pub entrance, what a blessed relief!  Inside at the Mayflower (1854 / 3071) and a queue to the bar was probably inevitable.  I spied the sanitiser and track & trace forms before the others (experienced pubber you see!) and set off a trend, as the others followed me.  When the barmaid pipes up, "can you all fill in a form whilst you are waiting?" the bloke behind me peers past me, gives her the sickliest smile ever, and says "Already done it, mwah, mwah!"  What a creep!  Bet he used to give the teacher an apple at school.  Reminds me I had been told to look out for a real ale they sell here called Bell End bitter, sadly I couldn't see it but got the closest thing I could, Cock-le-Boats.  Or was it Cockleboats?  I'd barely sat down when who should arrive for a very welcome cameo but Jamie from the Crooked Billet.  I'd dropped the 'award winning' BRAPA stickers and he'd run down here to return them.  Shows the measure of a man does that, wonderful.  A bloke next to me chugged down two quick Fosters with the sole intent of draining the pubs electricity supply by charging his phone.  Despite the tourist crowd, most of whom were in the outdoor area slamming down plates of fish & chips to a Michael Jackson soundtrack, the pub still managed to carry itself well, with some sense of atmosphere and history, and you could imagine how pleasant it could be.  Unlike Messi, this pub could perform on a cold Tuesday night in Feb (in Stoke).  I suspected I was missing some of the drama outdoors, as a barman returned to the bar hurriedly, with a customer just behind.  Barman was saying "sorry Sir, I didn't mean to annoy you on purpose!"  Wish I'd have witnessed what sparked that.


Sadly, the other Leigh GBG entry (the Brewery Tap) is 2 or 3 miles north of centre, and every bus I looked at seemed to run east to west rather than north to south, suggesting it'll pair better with a day when I go to Southend and can get a bus that rattles past the northern bit of Leigh-on-Sea.  True, I could've walked, but there's easier pickings back down the train line towards London.
The first of which was this rather delightful club ......... 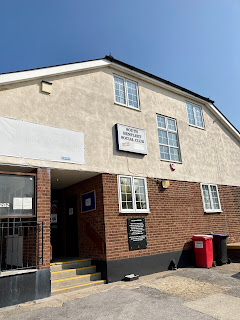 Leigh had been a really positive experience, enjoyed the place and people.  But what it did lack was a nice dark moody locals boozer, 'that's what I like' as Chas n Dave might've said if they were still alive, and that is what I found at South Benfleet Social Club (1855 / 3072).  I got a bit of the old confused staring 'what's your game?' style glances when I first walked in, as you tend to in a club, but once I explained I was one of those CAMRA loons, I was asked to sign this guestbook/Covid register that am sure had been there since 1975 with its nicotine stained pages.  I paid with coins for the first time in a pub since July 4th, having parted with many fivers, so I think some of these coins were those I received in change from the Woking Railway Athletic Club, which is a pleasing type of symmetry.  My task was made harder as the guv'nor appears in a Chelsea shirt, and 3 co codamols are flung across the guest book whilst I'm still writing in it!  The locals are perched at the near end, as Everton score 3 goals in 10 minutes, so I'm relegated to the far horse racing end, beneath a TV no one knows how to work.  A group of gregarious Benfleetians smile reassuringly at me, but 'Eileen' hasn't read the script and keeps turning around on her chair to eyeball poor Colin who is trying to remain an anonymous as any Cauliflower could be in these conditions.  The beer wasn't as well kept here as in the two Leigh-on-Sea pubs, but hey them's the breaks and it was a fun, amusing experience. 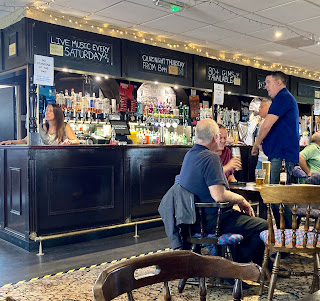 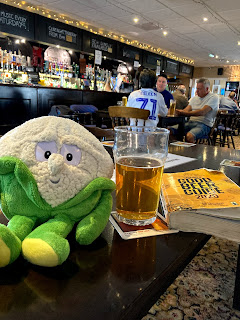 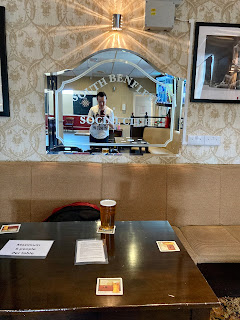 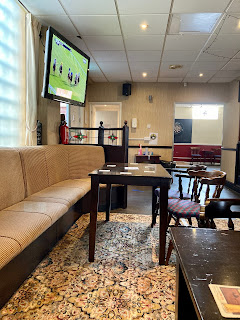 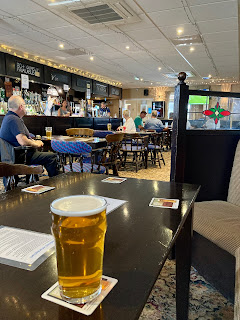 Halfway through the day already?  It had flown, and I didn't want to make the same mistakes I did in Kent the previous week (i.e. get incredibly sozzled) so it was time to slow things down a bit and get to some harder to reach places.  I'll tell you about them, a shut pub and a wonderful pre-emptive, in part 2 on Friday.
Si