It had been a mixed day in Northants so far.  Kettering had been mean and moody yet an excellent pub, Loddington had offered a glimmer despite some dining banality, and a peculiar taxi experience / train journey combo to Wellingborough had convinced me that today would need to be filed under the 'strange' category (although that could account for 95% of BRAPA trips in fairness).

Having walked 15 minutes into Wellingborough centre, pub three was waiting for me ...... 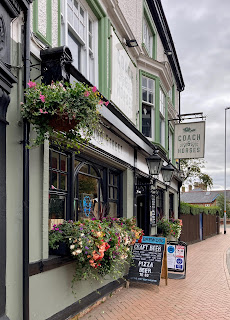 If the Coach & Horses, Wellingborough (1860 / 3077) looked a bit airy fairy from the outside with boring inn sign, craft beer, pizza and Brewdog blackboards, once inside, my initial thought was 'wow, I've finally hit the jackpot here!'  The lady who greets me, we'll call her Tracey, Track n' Tracey, is so delighted that I've downloaded the new NHS app for checking in purposes, she makes a point of thanking me.  Take that Piper!  The pub is a dark, wooden Aladdin's Cave, festooned with pump clips and 'breweriana' (if that's a word, it shouldn't be, awful) with signs, adverts and mirrors of pub times past. The beer range is insane, 12 handpumps, 4 craft ones, and 15 ciders!  It wasn't long before the alarm bells started ringing.  Can't go wrong with a Salopian, right?  Well, this Darwin's Origin started out 'tired' and was descending into vinegar by the end, I purposefully left some.  Too many ales on?  Definitely.   Being barked at (twice) not by dogs, but by people, as I tried to follow the one way system round to the gents didn't help, neither did an irritatingly vocal student trio, but the scales were rapidly falling from eyes.  The pub suddenly seemed all style, and very little substance.  A quirky looking lady eyed Colin from afar, but when I turned to smile, she looked away.  An old man on day release (care home?  prison?) was ushered in for a pint.  Trying to get him to follow the guidelines seemed a trial.  "We tried to stay in Kettering, but just ended up back here!" explained a lady, asking for a caramel gin.   A pub that promised so much on arrival, but had delivered so little by departure. 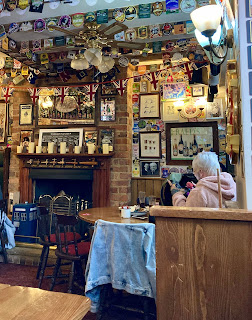 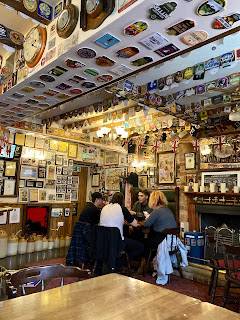 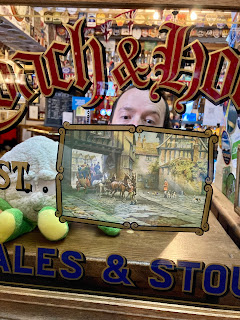 I felt quite poorly as I ran to Wellingborough's makeshift bus station to catch a bus out to two villages beginning with the letter 'E'.  Again, time seemed to be against me today.

Once there, a strange young man with a giant bottle of Lucozade appears at my shoulder and starts twitching (not in a bird watching way) and making excitable noises, not dissimilar to those Chris Tarrant used to make on Who Wants to be a Millionaire.

At the same time, Northants #PubMan of the year 2019 Mark Shirley and Leicester #PubWoman of the Year 2021 Laura Hadland are teasing me about a Micropub in Corby which definitely isn't preemptive.  Candle or something.  Why does Corby never have anything in the GBG?  It is a Northants Basildon isn't it?

All this going on whilst I'm trying to flag down this delayed bus, who seems reluctant to stop for me despite the bus station setting!  Yes, I was feeling the pressure.

I go to the furthest one out, despite being desperate for a wee again (cos I didn't wanna go again in Coach & Horses and get snapped at again).  The village is really pretty, despite more psychotic looking locals, this on the sign .... 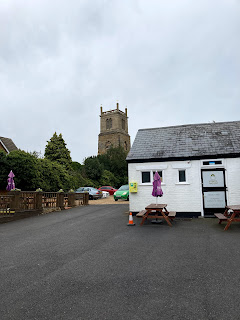 Nice church sticking out.  Is the pub even open though? 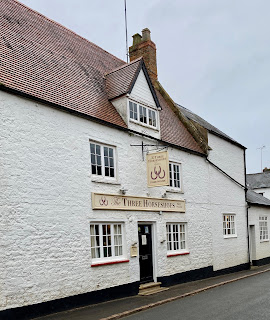 I admit, they had me panicking for a second here at the Three Horseshoes, Ecton (1861 / 3078) but it is one of those 'side entrance only' jobbies, hence the lack of life on first glance.  It is a rare 'pen & paper' check in, but I follow the bar round and plonk myself at a table, surrounded by totally wired old blokes, who smile and seem delighted to be here and drinking together.  The Oakham JHB is superb, perhaps even more so after my last ale experience, and the landlady comes over to chat to me and ask about Colin and what my game is.  True, inside, it felt more modern than the supposed 1757 date, but there was such an authenticity about the place and people within, it was easily my pub of the day.  A bloke in cricket whites is telling a cricketing anecdote.  Then I got a bit of a fright as they started talking about 16 year olds that were maturing nicely, so was quite relieved when I realised they were talking about whiskies.  Not that they were totally innocent, they were later forced to apologise to our fave Northants landlady for some comments about Amanda Holden which might've involved tits.  Maybe the lucozade twitcher was back?  Nevertheless, I covered Colin's ears, and #WokeSi2020 shook his head in disgust.   This was a fantastic pub experience.  It had been a trying day, this pub made it all worth it.

The bus is ten minutes behind schedule, or is that a new revised time?  That is the question a young chap and me are debating.  We try and ask the driver when we reach Earls Barton, the next village along, but he somehow mistakes this for "please can you drop us off in the centre of the village instead of the outskirts?"  Not sure how.
This is the prelude to the final, and strangest pub of the day!
Hmmm, so it is hard to know how much the Saxon Tavern, Earls Barton (1862 / 3079) was trying to be quirky and humorous, and how much of it was accidental.  Perhaps 50/50.  It is a micropub, a large one at that, but surprising to see in a semi-rural village.   Presumably, they lost all their old pubs and the locals needed something, so this opened.  Good on 'em!  I wander in, all eyes on me, people dotted about on colourful furniture.  Only one ale on, hurrah, that's the way to do it.  Guess what, it is in great nick.  'Woodcock's Relish' it is called.  Absolutely everyone is drinking it.  I've never heard the words 'Woodcock's Relish' said so many times in a half hour period.   The barmaid is friendly.  "Cash is good, we like cash!" she tells me, this is rare.  Sat down, chatting to her and giant pub dog Monty is a guy who might be the owner.  He warns Monty against the perils of getting a pork scratching stuck down your windpipe.  Monty isn't listening.  He tries to empower the barmaid by telling her she can have her dinner anywhere she wants in the world, but she reluctantly says she's already opted for Northampton.  The toilets are upstairs, clearly marked, but I can't get in.  I wait patiently in case someone is having a quiet poo.  But after a few mins, no stirrings from within, I return to the bar and enquire.  She unhooks this massive key from a perspex divider, and without a word, hands me it.  Wow, my 3079th pub and don't think I've been given a toilet key before, certainly not one that looks like it belongs in a Tolkein novel.   When I return, Monty (described as a walking dustbin) is sniffing out the BRAPA snacks from my bag.  Colin isn't proving an effective guard Cauliflower.  After a bit of cringe virus talk (I'm sure the locals were reading off a script to sound 'in the know with current affairs'), an old bloke arrives but no seats are available!  Time to turn him away like what happened to me in Upminster and Dorking?  Not a bit of it.  They pick up a spare perspex divide, plonk it on my table, thus cutting my space by 50% so he can sit down.  'It's okay' I say, 'I'm going anyway, you can have the whole lot!'  Astounding pub effort. 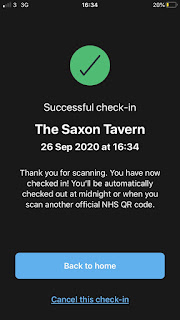 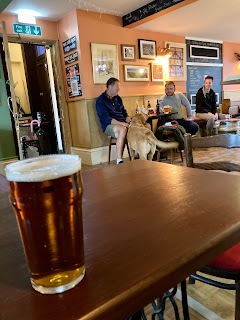 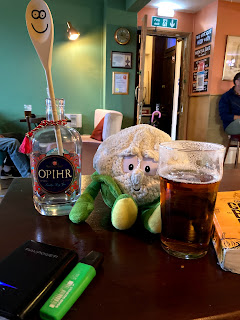 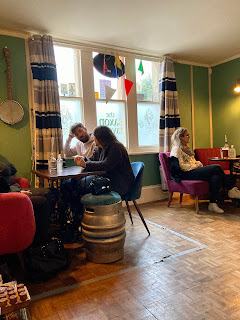 Back in Wellingborough, it is decision time.  I'm back off the 8pm from King's Cross, so really need to be on a train just after 6pm out of Wellingborough.  Plus it is a 15-20 min walk back to Welly station.  Shame as I still have the 'Little Ale House' to do.  But they want you to phone ahead.  What's more, Mark Shirley has mentioned a 'Little R'Ale House'.  This isn't even the same thing!  And right next to the station.  Preemptive?  But I spend so long debating it, I end up running out of time to do either!
Furthermore, the main station entrance is closed and it takes me and this bloke ages to work out of to get in! 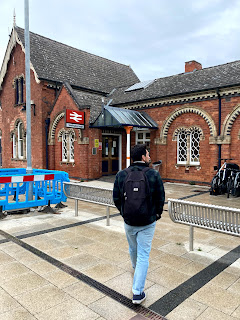 Shame really, I'd worked so hard to get from A to B as quickly as possible today, what with the taxi, and plenty of 'quick drinking up' efforts so I could get the next bus/train to wherever, and I've only managed five instead of six ticks.  Oh well, that's BRAPA life.
At least it means I have no qualms about going the full ESB when I arrive at Parcel Yard, feeling in much soberer state than this might suggest ...... 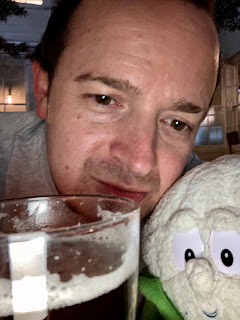 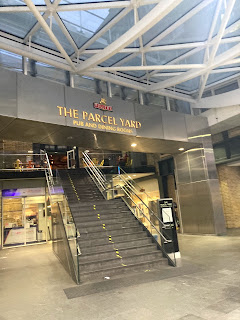 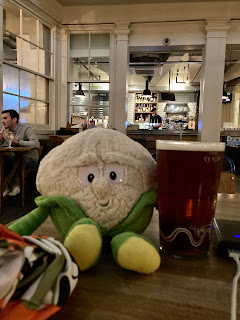 It is a lot busier today than two weeks back, where I sat alone in the dark and felt very drunk after Gravesend.  A man reading an intelligent novel hears my phone charger drop on the floor, so we have a quick chat about dropping expensive equipment that lasts all of 5 seconds.  And then, who should turn up but Twitter fave and low-key pub ticker extraordinaire Eddie Fogden, in hi-vis, on his way back from a productive pub ticking day around the Rochford area, which is high on the BRAPA agenda!
He's ticked more pubs than me, but doesn't make a song and dance about his ticking like I do.  Very nice chap, great to finally meet him.  Young too.  You don't get many young tickers.
He necks his pint impressively quickly as he's on the 7:30, I then get a lovely message from Minneapolis about my Parcel Yard check ins making one feel good about the world.  Nice to hear.  And ESB always makes one feel warm and fuzzy after a hard day's ticking.
Enjoyable day despite the challenges, and I'd love to do more of Northants. Not too many pubs, but quite a few rural no bus / no train buggers to test my planning skills!   But alas, I've gotta focus on North Hants now which is almost an anagram of Northants.
See ya Fri for my month end review.
Si
Posted by Si 'BRAPA' Everitt at 9:57 pm