The five I had earmarked for the day all seemed to be open all day, every day.  No threats of compulsory bookings, shove-ya-in-the-garden, or 'take out' only.  No temperature gun to the forehead, no Q code links to complex online forms.   Just a quick squirt of super strength export skin blistering sanitiser, an eager rub of the hands, a mumbled 'Simon' and phone number admission, and off to the bar you pop for your Vaux Samson, Lambton Worm, Niall Quinn's Discopants IPA or whatever ales they sell up here these days.  I'm a bit out of touch.

Making amazing progress as a result of driving up with Daddy BRAPA at the wheel due to an unfortunate train ticket mishap too boring to go into (unless your name is Tom), my interest was suddenly piqued by a possible 10am opener in Yarm called the Ketton Ox.

Three sources carried this 10am opening promise, one showed 12 noon.  Worth the diversion off the A19?  'Hellz yeah!'  Or at least 'Aye bonny lad'.   Dad pulls up in the busy market place, I get out and cross the road to explore. 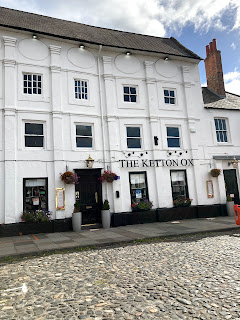 Of course it was closed.  No lights, signs of life, or trace of movement.  More like the Ketamine Ox.  If something in the world of pub ticking seems too good to be true, it always is.  Golden rule.

North Yorkshire GBG entries with an up to date social media presence?  You'd have a better chance of finding a humble L**ds United fan since their Premier League promotion.

A few wrong turns later (don't blame Father BRAPA, my navigation game was particularly poor today, hampered further by 'slow Joe' on the SatNav) and we weren't even knocking on our first pub door til well after 11am which seemed impossible when we were shooting past the Osmotherley's of this world an hour or so earlier.

In a surprisingly remote spot, we turned off somewhere near Easington Colliery and seemed to be heading straight into the North Sea when luckily the pub stuck out an arm and wrenched us into the car park. 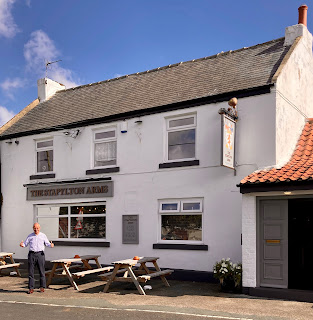 No wonder he looks so happy, Father BRAPA's first 'tick' since the pubs reopened on 4th July, and like a stodgy Nicholson's house in Central London, he's taken his sweet little time about it.  And Rivet Catcher too, one of his, one of MY favourite ales of all time, even if Jarrow are now North Eastern or something, the ale tastes as good as it ever did.  So, potentially this was an emotional moment here at Staplyton Arms, Hawthorn (1840) but no chance to saviour it in quiet, sombre reflection, for the landlady was utterly crazy!  I mean that in the nicest way, but a ball of energy that dominated all within, meant it was never relaxing, but always entertaining.  She was everywhere.  "I wiped the tables a few minutes ago, but ya can't be too careful!" she breezily announces, forcing a non-plussed Dad to lift his pint suddenly as the lemon cleaning spray droplets, glimmering in the morning sun, come perilously close to giving his Rivet Catcher an unlikely craft sour edge.  They'd pay six squids for that shit in Clapham Junction.  The cavalry arrive in the form of a (comparatively) stoic but inwardly amused group of waitresses and barmaids.  They receive instructions they already know for the impending lunchtime rush, most focus is on an incoming wedding party.  The highlight of which is when our fab hostess asks them all to tie their hair up in high ponytails, presumably so it doesn't flop in the food, a style they seem to be taking a bit of getting used to.  Always fascinating to see a pub in this 'calm before the storm' state, even when the calm is rather rocky itself!  But a lovely pub, unswerving in their hospitality, and a cracking pint to boot. 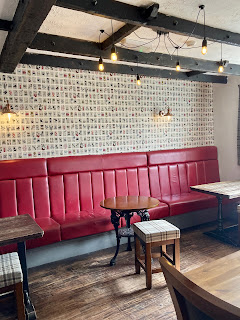 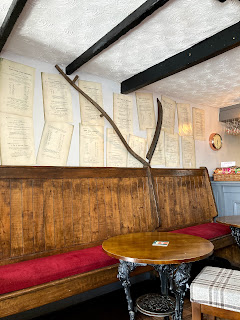 Next (and finally for part one) to our furthest pub north of the day, and despite the claims from our Hawthorn hostess that it has failed to re-open since lockdown, I've heard enough evidence to the contrary to be unworried, despite Father B's nervous glances.

A better pub ticker than me has already told you this year that the area south of Sunderland has a real dearth of GBG entries.  Houghton-le-Spring 'Spoons is all well and good, West Herrington's Stables never really cut it for me, so this was to be a rare treat, but one laced with speculatively raised eyebrows on my part before entering.

Dad captures the moment my BRAPA career nearly came to an abrupt end as I cross into traffic at the busy road junction ......


After signing the type of guestbook which looks like it has been sat on the bar since 1975, almost like it knew the 'Rona was going to happen one day, it is time to sanitise those hands once more, and the always gorgeous Double Maxim seems absolutely the correct drink to order here at Guide Post, Ryhope (1841).  This is a stunning, surprisingly large street corner local, which captures the great N.E. spirit more than any other, on a day of strong competition.  The landlady looks like she's pulled more pints of ale than anyone else on the planet, it smells like the smoking ban only came into effect yesterday, and despite having been at University for three years in Sunderland, the locals speak a Mackem varietal that presumably you'd hear at Roker Park in the 1950's.  Incomprehensibly brilliant.  Newer GBG entrants like this are surprisingly rare in the GBG, yet they have such a simple formula, no one is trying too hard (on the surface at least), it is just a living breathing pub where everyone is happy, or at least content enough with their lot.  So easy it was to get lost in the moment, I almost forgot that this was my final Tyne & Wear 'tick' of the 2020 Good Beer Guide, so an extra reason to feel jubilant.

So, it was all going very well so far.
Back down the line into County Durham, and I'll tell you about Seaham, Seaton, and a North Yorkshire bonus, probably on Wednesday now as I'm out in York tomorrow with fwends.
Si