Being a BRAPA chauffeur presents its own challenges that irresponsibly drinking passengers such as myself needn't concern themselves with.  Not being able to drink in every pub, they therefore have to be discerning, choosing their pub battles carefully.

Remember when Martin Taylor drove me around rural Cambridgeshire?  Some of my happiest BRAPA memories involve him peering through various pub windows.  Is the Bass on?  Yes and he'd tolerate my company for 27.5 extra minutes.  No, and he'd go for a 27.5 minute walk around whichever six fingered village we found ourselves in, photographing weird sexy phone box interiors or disused outbuildings (i.e. potential sites for micropubs).

Daddy BRAPA had a similar conundrum today.  He'd so far enjoyed Hawthorn & Ryhope, but seeing pub three was a micro, saw this as the perfect opportunity to retire to an independent little coffee shop whilst I met the locals.

I'd been through Seaham on the train what seemed like hundreds of times in my life, but the town itself was new to me, and prettier than I'd imagined, or was it just Whitley Bay with a false moustache?  Hard to get a true perspective when you are in the car. 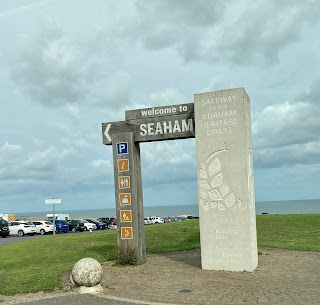 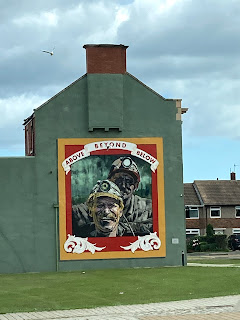 Studiously avoiding the similarly named and closely situated Coalface (surely aimed at tripping up us pub tickers), Dad took the photo outside the correct pub in a semi-pedestrianised row of shops and scuttled off for coffee, leaving me at the mercy of the locals ....... 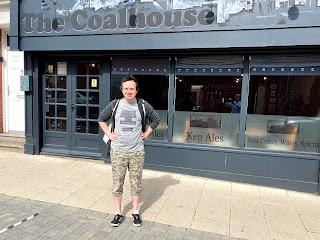 A lady scurried off to do her shopping just as I arrived (good move madam!) leaving me here, in the Coalhouse, Seaham (1842 / 3059) with the garrulous guv'nor and the equally friendly man-friend of recently departed lady.  These Coronacentric times will not quell the sociable appetite of the North Easterner, and I was welcomed with open arms, just not literally.  My first act was to gasp at the strength of the hand sanitiser.  "Best hand sanitiser in Seaham" the guv'nor proudly confirms, as my bloodshot eyes run with water and my skin blisters.  Not since Duncan Mackay ticked off THAT Micro in Chernobyl has pub ticking been so fraught with fallout, boy.  BRAPA is a popular concept with these two friendly gents, and the lady does eventually return with a big bag of shopping.  They love Beverley but hate boiled onions.  For a micropub, it has a surprising tie with Sam Smiths, and am sure the guv'nor tells me with some chagrin the Organic Lager is his best seller!  Most of the chat centres around local pubs, a lot of amusing chat about the Rat Race in Hartlepool, I get some interesting lowdown on the High Hesleden pub which was shut when Dad & I tried to do it pre-lockdown only to find them on holiday, and he tells me my next pub in Seaton 'isn't what it used to be'.  'We'll see' I think to myself.  Lovely folk though, but hard to 'make notes' when you are stood up near the bar actively engaged in conversation.  Promise it won't happen again!


My 27.5 minutes are up just as some other customers arrive, and Dad is standing in the sun, looking thoroughly revitalised from his caffeine fix, and off to Seaton we go.

A road closure hampers our progress, and we have to take a long way around, but Slow Joe on the SatNav adapts surprisingly quickly for once.

We eat some amazing ham n tomato sandwiches Dad has brought, ham from the tin with that lovely jelly stuff on, and pull up before the pub, realising it is at the bottom of a cul-de-sac.

A huge group of lads are sat out the front, drinking, swaying, sayin' wahey, turns out they'd arrived unannounced on their way to a 'do', so it has thrown the pub into a bit of a spin, and makes Dad a bit nervous about the obligatory BRAPA outdoor shot ......

... so we improvise and I tell Dad I'll take an action shot of him walking into the wonderful Dun Cow, Seaton (1843 / 3060) and by gum, if the Seaham guv'nor was right and this pub has gone downhill, I struggle to imagine its levels of awesomeness before!  In fact, a guy pops up on my Twitter to say last time he was there, Boddies Smoothflow was the best thing on offer.  You wanna flake in that luv?  I'd almost forgotten that a Daddy BRAPA day wouldn't be complete without me coming back from the loos to find him having just failed to engage a barmaid in some (often) highbrow banter.  Here, he tells her that he finds it very interesting that everything around here is named after Alfred Lord Byron.  Her reply?  'Huh?'  These people don't deserve Dad, they really don't!  The group of lads depart to their do, to a collective sigh of relief from this otherwise sleepy pub, and we can relax into the deep green and brown furnishings, plus beautiful stained glass bar top.  Some pubs are just a joy to sit in.  An old gent is perched not too far from us, looks like he'd be far better sitting down.  He asks if there's any way he can get to watch the League Cup game between Sunderland and Hull City?  My three questions to him would be 'why?', 'why?' and 'why?'  For a second, I thought the barmaid was going to pull down a giant TV screen and put it on some Russian network, alas not.  He shambles off to the corner, propping himself up on his stick, looking slightly crestfallen.  Great pub this.

It's time for the drive south, and we are surprised to learn how far south we can pick up Radio Newcastle which has live commentary of the game that no one apart from that old bloke is talking about, Sunderland v Hull City League Cup.

They sound absolutely all over us, or at least, that is what the local commentators are saying, so when we get to our final pub of the day, not far from Thirsk, it is a relief to hear the signal breaking up!  A late revelation is the pub doesn't open til 4pm on a Saturday.  It is 16:03 as we pull up, so you could say perfect timing. 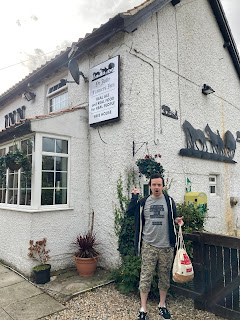 But once inside the thankfully open Jolly Farmers Inn, Dalton (1844 / 3061) it had the feel of a pub that had been open a lot longer than three minutes, feeling very 'worn in'.  If a pub was deliberately trying to upset me from the outset, having L**ds United memorabilia emblazoned around every nook & cranny would probably be a good place to start.  Regardless, this was a cracker, low key, the smell of chip fat from 1985 and an ale toss-up between John Smiths and a Rudgate definitely reminded you that you were back in Yorkshire.  North Yorkshire often struggles with the amount of airy-fairy, namby pamby, hoity toity dining pubs in the Good Beer Guide, so nice to see something a bit more traditional.  With Hull City holding on to 0-0, all seemed well with the world but late drama followed as I reached into my bag and my Good Beer Guide wasn't there!  Nooooooo, not another Denby Dale, surely?  Dad rushes out to the car without a moment's hesitation.  I sit there, drinking my delightful Rudgate, all a fluster.  I tell Colin "why couldn't it have been you?" but he doesn't respond.  Dad is taking a while.  Has he gone to Seaton?  He returns a couple of minutes later, triumphantly brandishing the Book of Dreams 2020.  What relief! It'd been pushed right under my car seat, how did I manage that?  Phew. 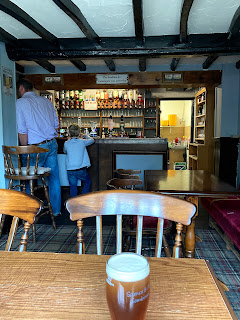 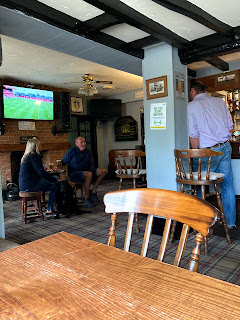 On the way back to York, I learn Hull City have somehow fluked a win on penalties.  Hurrah!  Who do we get in the next round?  Dirty L**ds, of course we do!  Perfect fearful symmetry, or whatever that poet Robbie Blake said in his poem about Tigers.

In fact, the game is in progress as I write this but I'm refusing to look at the score due to likely abject humiliation though we can claim we don't care and we'd rather focus on the league anyway, so all good.

It was raining now.  Doesn't mean we can't pop into a very busy Fox for a cheeky 'under the umbrella' outdoor half does it? 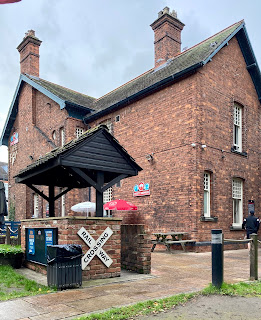 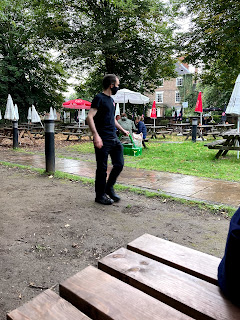 Great day, thanks to all the pubs for being very strong, thanks to Dad for being even amazinger, and well done to the Beer Guide for not getting lost.  The 'Two Veg' if you wondered were cauliflower and potato (which caused the chip fat smell in Dalton) if potato is veg I think it is.  Tomato I think is a fruit if you were thinking back to our sandwiches.  Sorry.

Join me on Friday when I tell you about the first part of a particularly boozy day in North Kent which I have little memory of.