Unlike my trip to Barrow a fortnight before, the Friday evening journey up to Kendal for the start of an epic 31 pub adventure (27 of them in the Good Beer Guide) was hassle free.

In the absence of floods, a Riggy style character and a mystery minibus, the only thing likely to spook me was the Premier Inn in which I was staying ......

Quite apt really, as this particular Premier Inn was akin to a House of Horrors at times, no hot water for three days and breakfast chaos.  Not great when you've paid a fortune!  But then, I love how impersonal & comfy they are compared with nosy B&B's.

I had a quick squirt of mini-Lynx, changed my shirt, and bravely headed into the dark chilly Kendal evening.  My first pub was right at the far end of town, and like the one in Middleton, the name was obviously a nod to the neighbouring church ...... 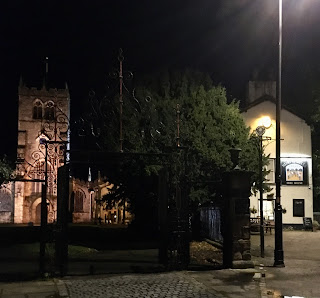 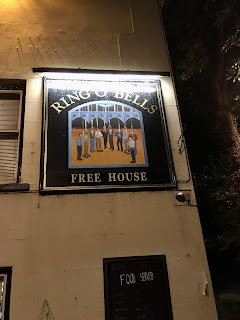 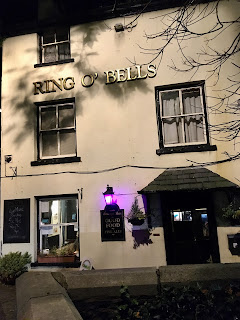 I wasn't really prepared for a 'pub of the week' candidate so early, here at the Ring o' Bells (1570 / 2787) and my sobriety combined with a lack of 'BRAPA match fitness' (think of a footballer struggling to get up to the pace of the game after a long injury lay off), was in hindsight, my slight undoing here.  Not that I realised at the time, as I was quite awestruck by the over cliched "it is like walking into somebody's front room" feel, but very true here, as it was a small one roomer.  I had to squeeze between bar and door to get a glorious pint of Coniston Bluebird, a beer from my early real ale days of 2002 I'd almost forgotten existed, but it is a true classic.  The barmaid smiled sweetly, and with three couples evenly spaced around the pub, I sat in the one vacant area of bench seating in a corner.  As lovely as it was, an uncomfortable feeling of 'being expected to contribute' left me on edge throughout.  I'm not one to impose themselves, so I passively laid my GBG and highlighter on the table, in a vague attempt to invite conversation.  It never happened, despite the lady closest turning to smile occasionally.  I laughed along with the awkward humour - the lack of a modern Nat King Cole in the Hit Parade, a Circumstance / Circumcision joke which got a whole lot more credit than it warranted, though I did comment "haha, that was very quick" in a rare moment of me opening my mouth.  "This place attracts quirky, strange characters, that is the beauty of this pub!" remarked one lady, so I blinked straight ahead, cradling Martin the Owl whilst chewing the end of my highlighter pen.  Getting up to leave felt liberating, so I told the kind lady closest to me it was a cracking pub, wish I could stay, but I'm visiting them all etc etc.  Her husband then, rather pointedly remarked "you come into a pub like this, you need to join in the conversation."  Aha, so my hunch had been correct.  I let the comment wash over me, ploughing on with BRAPchat, Mr Circumcision now giving me preemptive ideas aplenty.  Said a cheery good bye to all, the notable exception was Angry Hubbie who didn't look up from his paper! Ouch.  Shame when things in pubs feel forced. 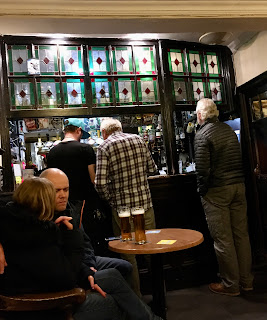 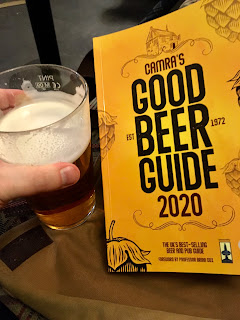 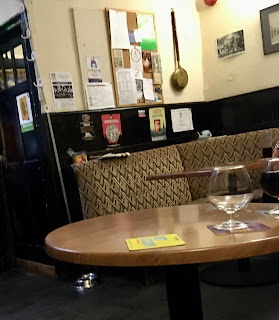 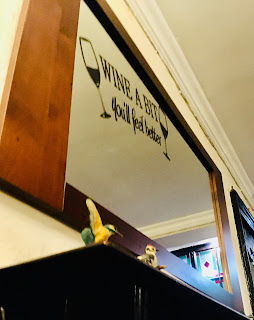 I walked back up through town, around a very unlikely narrow road out of town where the town's GBG Micro (they all have 'em!) was situated.


And because of my experience in the Ring O'Bells, I was able to appreciate the laid back, low expectations atmosphere of Fell Bar (1571 / 2788) where two chirpy young gents greeted me as one, serving me a pint of Ghyll (one of those Cumbrian words I'd pronounce properly as the week went on even if I didn't have to go to the famous, if slightly tired, Dungeon Ghyll Hotel).  They had their hands full with some uniformed red shirted people who looked like they worked for a Gaming company, asking very specific beer bore questions about boiling, mashing and temperature of the making of real ale.  The bar was much as you'd expect from a micro, strange wooden sauna style decor, merchandise, offers on cans.  But it was warm and pleasant in feel, and as I slipt into a beer-talk related reverie (coma), I contemplated this pub v Ring o' Bells, silently chastising myself for feeling a lot more 'at home' here, despite it being easily the less aesthetically pleasing.  Funny ole' game this pub ticking lark.  A big geezer who'd been keen to impose his humour on the place told a story of the death of Cream drummer Ginger Baker, thinking it was Queen drummer Roger Taylor.  Everyone laughed, was no worse or better than the circumcision gag from earlier, yet here I didn't feel obliged to laugh, so didn't! 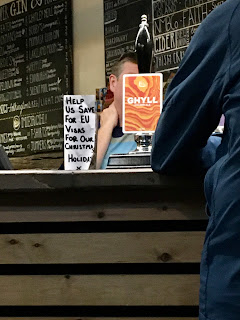 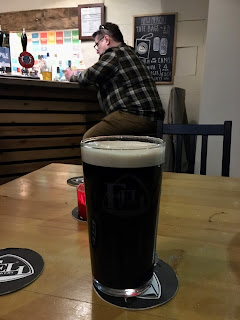 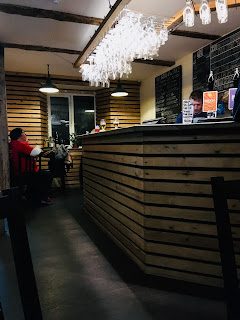 My third and final pub of the night saw me continue north through town, just past my Premier Inn conveniently enough, and in the black of night, you'd hardly have even known it was open judging by the ancient worn pub sign and very ancient frontage. 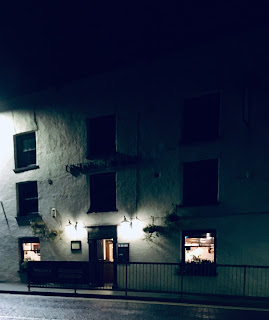 But whilst the phrase "never judge a book by its cover" generally leads to a 'positive', the exterior betrayed what I found inside at the New Union  (1572 / 2789) which had a very smart, renovated, 'someone's spent a lot of money' feel, and judging by the locals sat around the room and the bar, it wasn't necessarily something they'd demanded, as it felt like they'd be more at home in a Ring o' Bells style boozer.  Must be appealing to the tourist trade, but tourists don't like walking up slight hills off town centres.  Still, the chap who served me seemed a kind soul and I was in the mood for Porter, always nice to end the night on a dark beer innit?  I perched on an annoyingly squashy leather seat which meant I felt like Gladstone Small every time I reached up for a swig of my pint, such were the awkward neck logistics, but most of the excitement came from a dog at the bar called Barney, attached to a man I exchanged the most basic pleasantries with.    It obviously wasn't a twog cos it kept coming over to say hi (I actually had a bag of mini cheddars in my pocket, and Barney had a sixth sense for these things).  But when Dolly the dog entered attached to a lady, owner and Barney's attentions shifted! I imagined both this man and woman were single, and as the dogs 'got to know each other' (sniffing bums etc.) I wondered if their humans were thinking 'oh, if it only it were this easy for us!'.  Feeling half like a gooseberry (a goose?), I supped up and left, saying a theatrical "good bye Barney, good bye Dolly" on the way.  Surely the owners'd react?  They barely noticed, as they were now looking at each other doughy eyed.   Or so I hoped, wondering if BRAPA had been witness to beginnings of a romance not seen that since Bon Accord, Glasgow in 2014.  Or was I just trying to make this pub more interesting? 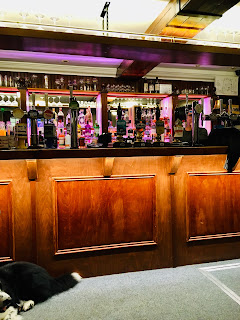 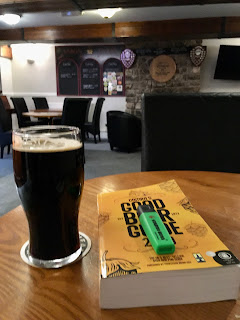 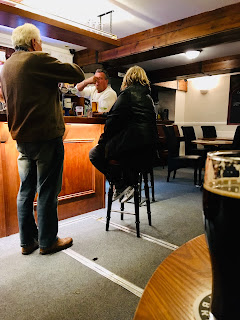 I grabbed a bag of food from Tesco Express and headed back to my spooky room, for I wanted to get six pubs in tomorrow and didn't even have a plan in mind, there were that many to go at!

Join me tomorrow for tales of that,