After a peaceful night in the UK's spookiest Premier Inn in Kendal, I headed south on day two, with the aim of mopping up the pubs I failed at on my recent trip to Barrow and surrounding area.  But BRAPA being BRAPA, of course things didn't go entirely to plan.......

All was Cumbrian tranquillity in the pretty village of Greenodd first thing however, spoilt only by me stalking the streets, waiting for 12 noon opening.  A few brightly coloured locals gathered, perhaps the local neighbourhood watch, in case I was up to anything shifty. 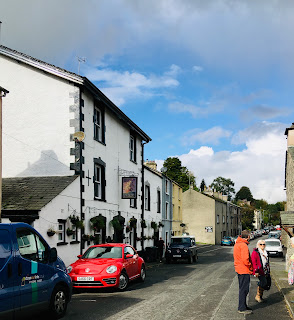 After a brief chat about the weather,  they realised I was a pukka bloke (or is that just the pies I have stashed in my bag for later?) and when a smoking dude who could've belonged to the pub or just been a local drinker said 'aye', I was allowed to step inside ........ 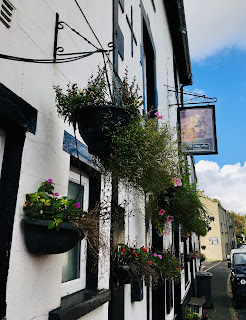 Big fan of the Ship Inn, Greenodd (1573 / 2790) , one of the more understated jewels of  the Cumbrian crown, in a week where I'd enjoy more good than bad experiences.  The young lads serving were friendly, and probably would've talked me through the local Greenodd brews and given me tasters if I'd not hastily gone 'IPA pint!' like someone who thought 12:05pm was far too late to start their Saturday drinking (which I did).  I sat down on a leather settee by a woodburner that was immediately 'fired up', but it struggled to maintain its flame until someone found last year's Christmas tree in the basement, put it on, and 'whoosh', well my replacement Good Beer Guide and eyebrows nearly all went up!  Soon, I was joined by Jim the dog.  This Cumbrian holiday saw more dogs in pubs than was really reasonable.  You know I'd rather see a pub cat any day but Jim was the GOAT-CD (Greatest of all Time Cumbrian Dog) and a contender for BRAPA pub pet of the year.  "He's so soft!" the barman told me, and soon Jim was just resting on me, couldn't even open the GBG to highlight it for ages.  "Uh oh, Nigel will be upon us shortly" commented one barman to the other peering through the window, and they went to hide.  Nigel, when he arrived, seemed a nice fella though I didn't wanna get too embroiled in BRAPA explanations just in case. As time went on, I think I saw the problem, bit of a hypochondriac.  He seemed to have everything wrong with him!  With the Rugby World Cup boring us from up above, the woodburner and weather, which had somehow turned to torrential rain, were far more exciting things to look at.

The sun was back out, significantly so, as I want to blame it for the first BBU (BRAPA Balls Up) of the holiday, and it didn't take long did it?

I'm waiting for the X6 to take me back towards High Newton where I had a much needed tick, but frustratingly, the X6 was five minutes delayed, and the number 6 was due at the same time and appeared first, and in the gleaming sun, I couldn't see the number properly and just got on!  I was unlucky really, and having a day ticket, didn't have to specify a location.  I even waved back at a waving Twild with a Dad and chatted to some old American ladies, so for a while there, I felt all was peachy.

But alas I soon realised via Google Maps that we were going north alongside Lake Windermere.  Bugger!  At least I had a pub to do there, so time to totally change my strategy for the day.  You have to be adaptable in this pub ticking game, and that isn't something that comes naturally to me.

Windermere was full of the kinda cooing tourist scum you'd expect ("oooh look, a lake, oooh look, a mountain, oooh do they do artisan gin or coffee, oooooooh  oooooh oooooh") , particularly on a sunny Saturday lunchtime, so no surprise the pub was chock-a-block ...... 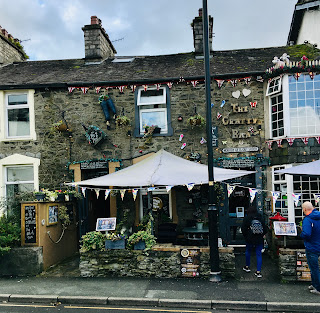 I wasn't really expecting to enjoy something named Crafty Baa (1574 / 2791) and speaking to folk, both on my travels and on Twitter made me realise how much this place divides opinion.  Those who think it is amazing, and those who think it is overly done gimmicky nonsense aimed at gullible tourists!  Well, guilty as charged if the latter is true, for I loved the place.  I confess, totally confused walking in, where were the handpulls?  Everything seemed to be served in schooners at ridiculous prices, and in that sense, yeah, I get the 'gullible' accusations.  But just when I thought all was lost, I spied a 'pie & pint' room behind a closed door where three Carnforthians and their excitable mutt were presiding over three handpulls, only one on, the lovely Hambleton Nightmare, which came with a free mini pork pie (from Asda, not 'hand crafted' confessed the barmaid was pushed on the matter!)  Did the Nightmare give me wind?  Not really, but we can say it did as it helps with the blog title.  The trio were a chirpy talkative bunch, and we spoke on Carnforth, Nether Kellet and Morecambe pubs - the more outspoken lady telling me "you are basically a trainspotter!", as I explained BRAPA.  What with the dog's constant jumping up, and my weird position between door and bar to try and enjoy pie and pint led me to leave them to re-enter the 'main arena' to admire the crazy decor, shit hanging from the ceiling (not literally) and roaring fire where I finally rested, slightly more comfortable.  True, the place was full of wide-eyed tosspots, but I enjoyed the uniqueness and warm atmosphere. Give me this over your standard chilly micro any day, at least it is trying to BE something rather than just 'existing'. 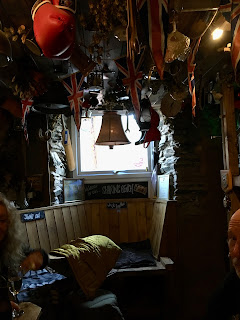 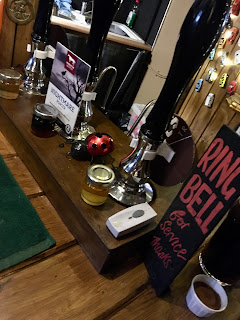 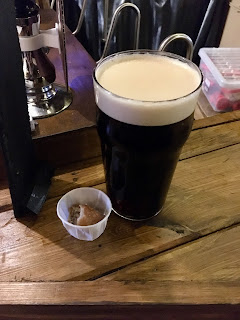 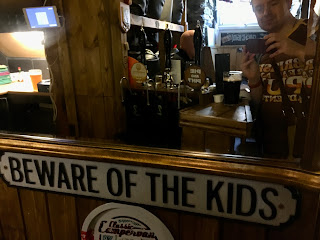 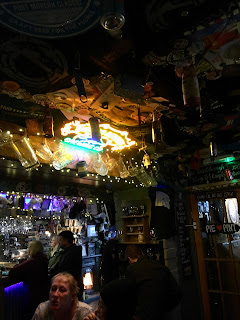 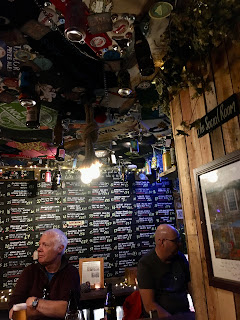 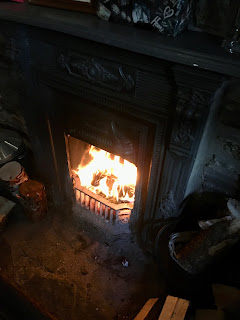 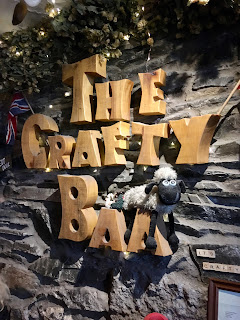 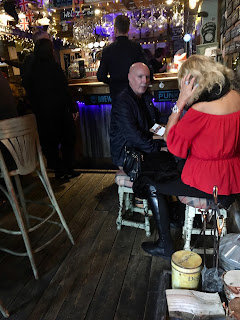 It now occurred to me I needed to 'engage my brain' and think about where I wanted to go next, having found myself rather reluctantly at the heart of the Lakes, something I'd intended to avoid on the Saturday and go for more rural outlandish ticks.

Oh well, i was here now so I walked to the bus station, a mass of confused Asian tourists gawped as patient staff trying to sell advance tickets and offer helpful advance, all in the shadow of Booths, that most wondrous of NW posh supermarkets so I popped in for a debut Booths experience - a piss but no purchase. It was a better quality piss than one you'd have in Asda.

I hopped aboard the Grasmere bus, stayed on through Ambleside, but hopped off at a place called Rydal, as it made sense at the time.  A brief walk took me to the pub across the road in what seemed to be real walkers territory, leafy greens and autumnal ambers with the sound of running streams ....... 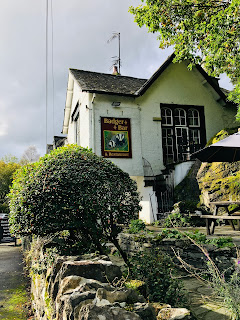 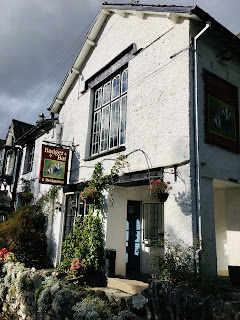 Perhaps unsurprisingly, I walked in to a manic dining, doggy environment at Badger Bar, Rydal (1575 / 2792), greeted by a series of sullen if hardworking bar staff, who looked at me like "ugh, when will this tourist lunchtime rush end?" but fear not mine hosts, only an easy pint order for me.  Customers weren't a smiley bunch either, and as I ordered a pint of the gorgeous house beer, my thoughts were all on 'where the heck am I gonna sit?'  So imagine my relief when a bunch of blousy old veterans with three yapping dogs announced they were moving on, so I hovered, and after an excruciating wait for them to zip up rucksacks, find arm sleeves for coats, and untangle dog leads, they FINALLY fucked off.  Happy as I was to get sat down, the area I was in smelt so strongly of dog (ugh!) it diminished the quality of my pint.  If I could have my time back here again, I'd have moved seats, for less than five minutes after these folk left, the entire pub save for two couples left leaving a near deserted room.  Wow!  Had they heard of BRAPA?  Finally, I could appreciate this beautiful old fashioned hotel bar for the quality it possessed, swathes of red bench seating, beams, wood panels, a truly classy place to come for a pint.  And don't forget the 'piss de resistance' the gents toilets, the trough carved into the mountain side, or something.  A nice place, but even when dogs leave, the residue is still there to blight you!

Halfway through the day then, time to catch the bus to Grasmere.  I'll tell you about that (well, not the bus journey) tomorrow.