"Wanna share my can of Fosters, mate?" says the bloke next to me on a minibus bouncing along country lanes somewhere near Cartmel, about 10:30pm last Friday night.  I cannot see a thing outside, but can hear water lapping up around the wheels and sides of the vehicle.  I wonder if this will be my last ever BRAPA journey.  But I still decline his 'kind' offer.

The guy tells me to call him Riggy.  We bonded at Carnforth station, being amongst a group of eight left stranded - the 'rail replacement' hadn't shown, trains all cancelled due to flooding on the line,  the rain is coming down sideways, and we fully suspect we'll be spending the night on the station.  Riggy is angry with his Mum for suggesting he might have been standing in the wrong place and missed it!  Just as we are losing hope, a man pulls up in a minibus.  "I'm only supposed to be going as far as Cark" he warns, but we plead with him as he is our only hope of getting to Barrow-in-Furness.

We are grateful when he reluctantly agrees.  Not so the metaller dude behind us. He can't accept that the driver is unsure of the route, constantly stopping to adjust his Sat Nav, looking for stray passengers etc.  After one too many snide comments, the driver snaps.  "I'M LEAVING YOU ALL HERE AND DRIVING OFF IF HE SAYS ONE MORE WORD!"  Metaller dude's missus tries to shush him, as do the 'bantery' young Dolph Lundgren and his York college girlfriend.   Riggy saves the day with a classic piece of mediation.  Metaller apologises.  "I have a short fuse" he admits,saying farewell to us at Cark-in-Cartmel station.  Riggy jumps out, in urgent need of a piss.  'Taking him ages', moans fake Dolph.  'Too much Fosters', I reply.

I quite like Riggy, an interesting chap.  An electrician working in Halifax and Hull.  Tells me his Dad is a millionaire with the voice of Michael Caine.  They used to live in South Africa, then Rio, he is lactose intolerant, has hyper metabolism.  He is stressed at the moment cos he has FOUR ladies on the go at once, not good for his health.  I'm not quite sure where Barrow comes in, or why he has a local accent, I daren't ask, but he was looking forward to escaping a chaotic last week with a trip back to him Mum's, and look how it has started.  I sympathise, telling him of my tough week, I'm very much in the same boat, and a boat, it almost is!

It is 11:40pm when we reach Barrow, where Riggy says he'll buy me a pint in the GBG pub across the road.  "IF it is still serving" I worry.  "This is Barrow, of course it'll be open" he reassures me.


Duke of Edinburgh, Barrow-in-Furness (1554 / 2770) is grander, near palatial than one I'd been picturing in my mind's eye on the minibus.  We dump our bags at the door and head to the bar.  Barmaid is a friendly sort but asks us "are you staying here in the hotel cos we close to non-residents at midnight?"  "Well, it isn't midnight yet so there's no problem is there?!" snaps Riggy, who seems to have a slight short fuse of his own.  He needs an urgent piss again (I like meeting people with weaker bladders than me!) so he orders a lager, I get something Lancaster, and leaves me with his credit card.  "Let me get this straight, you've only just met him haven't ya?  Very trusting" says a local who was observing us more closely than I'd realised.  He asks the barmaid how many times I'll have to swipe the card against the contactless reader to get a bottle of Dom Perignon!  Errrm, not sure it works like that!!  Perhaps contactless payment is new to Barrow.  We sit in the window, really nice atmosphere here even when they start locking all the doors.  Riggy is either intensely telling me more crazy tales, or having a quiet spell where he seems to drift off into a mental abyss.  I can handle that.  During the 'guest highlighting' I get 'Sidcup' flashbacks, but he doesn't highlight anything he shouldn't.  Riggy asks if I want to stay for another, but I tell him I've a Travelodge to get checked in to. We exchange numbers, don't know why, and I thank him for the pint and stories.  "I'm too cool to read blogs" he says when I explain BRAPA, and you know what, he was being serious.


'Tis about half midnight when I arrive at the Travelodge so amazed to see a smiling man on reception and the place all lit up and open!  "You part of the Coniston party?" he asks.  "No, I'm Simon Everitt".  "Ahhhh, that explains it then" he replies, and I'm still not sure what he meant.

After a very late meal, I wake 9am feeling a bit exhausted but raring to go.  Riggy rings.  His Mum (or 'stupid bitch', his pet name for her) has locked him out of the house and he thought my number was his Mum's friend.  He wishes me luck with the pubs and I say bye, perhaps forever. 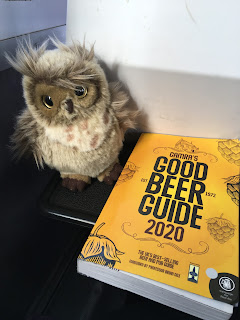 I'm delighted to see the sun shining and trains running to time.  Soon, I'm on one.  Being a mini-BRAPA holiday, mascot Martin the Owl has come along, plus the most lightweight GBG in the land.  I jump off at Foxfield, where there's a pub, but first I want to do a more difficult one.  Buses seem to have ceased running to Broughton-in-Furness in the past year, so I have to walk it, 30 mins approx, easy by Cumbrian standards. 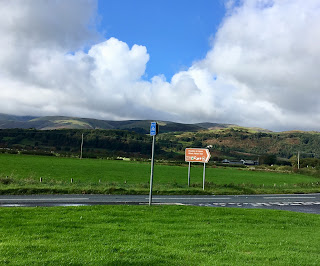 I keep seeing signs for Broughton Beer Festival which is THIS weekend, bloody typical!  I complain because I like to see pubs in their natural states and this may be an unwelcome variable.   Little do I know a £1 minibus is being laid on, running between my next two BRAPA ticks.

Broughton is a pretty village, lots of residents angry about dog poo, the 7721st biggest town in the UK (out of 7727).  Zero phone signal, luckily the pub looms large out of the market square, all hotel-like, which is becoming a Cumbrian theme already after Alston and the Duke of Ed. 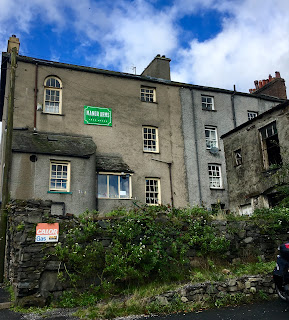 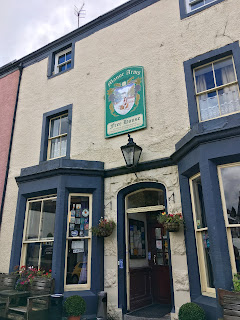 And sure enough, people are setting up stalls opposite the pub.  I do my best Columbo, having spied a tent with a few handpumps, plenty of waiting bread buns for burgers and sausages, and a big banner advertising the festival.  "Wait a second .... is THERE a 'beer' festival on?" I ask a startled man, and tell him that isn't the reason I'm here.  He looks suspicious and mutters something local.  I go inside, praying I can get a normal pint in a normal glass using normal cash!

And I'm not disappointed, Manor Arms, Broughton-in-Furness (1555 / 2771) is a pub lovers dream, so much so I'm almost frustrated at what little there is to write about!  Assuming the huge number of handpumps in here as well is also festival related, I settle on an 'Ulverston Laughing Gravy' and, as first customer,  sit in the cosy little window seat looking out into the market.  It feels very untouched, this bar room, and not too surprised when I got connected to Wi-fi that a nice Twitter bloke from Kent says it might be his favourite pub in the country!  Impossible to fault.  Every time someone new arrives, especially a group of 50 year old blokes with a dog or twelve, my first thought is 'festival scum, piss off outside where you belong'.  Is that harsh?  Finally a nice couple sit beside me, she sounds Scottish, him Southern, but they live local and when husband tries to read the newspaper, realises he can't cos he doesn't have his glasses, she says they are in the car.  "Well run out and get them" says wife, "the exercise will do him good haha!" she whispers to me. I'm watching him and he barely breaks stride.  Poor effort from the man.  Then I bore them with BRAPA for 10 mins.  Wonderful pub, but I bet it was mayhem by evening time. 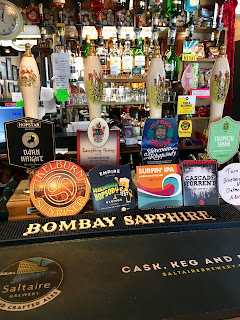 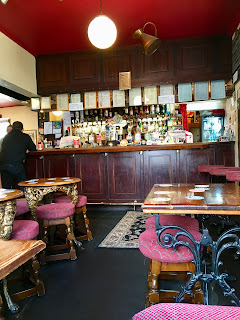 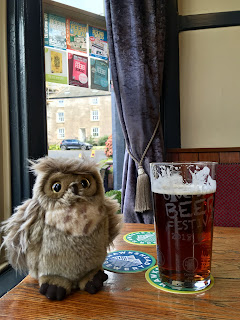 Back along the lane to Foxfield, I pass a strange Ian Holloway / Whitney Houston couple in shades who say 'hey there', and then for my next pub, also a multi-award winner  .....

I really was going to be spoilt for choice in Cumbria if this intro to pubs was anything to go by, as the Prince of Wales, Foxfield (1556 / 2772) had a similar atmosphere to the Manor Arms, a sort of sleepy, effortless, unpretentious hubbub which by the end of the weekend would characterise this part of Cumbria.  These would be great pubs in any part of the UK, and yet you feel they could only exist in specific areas, say rural Lancs, Isle of Man, Dorset and the like.  Again, I had to walk past an outdoor festival bar, feeling the need to acknowledge them as I walked through, yet determined to get to the main bar uninterrupted!    Sadly, it wasn't to be a 'lucky' pub for me.  Despite what seemed like quite a roomy environment, every table was taken, mostly just one old duffer sat a table of six.  Very frustrating.  I had to go around the corner to the darker back, but even on finding a side room thinking I'd cracked it, the table was full of pineapples and broccoli, and not just ANY broccoli, Preston broccoli, the WORST type of broccoli.   All that was left to do was perch in a tiny chair (lower than I thought) which made a bunch of brewers laugh as I nearly fell through it!  "Beauty of the place, no two chairs are the same!" one tells me from his comfy armchair.  Later, one of them did a terrible Johnny Cash impression.  Al Murray once bought beer off the cool blazered one, a claim to fame.  All the while, my ale was cloudy and had a weird taste but I put it down to something unfined and a strange hop.  But as time went on, the brewers left and I too became an annoying old duffer sat alone at a table for six.  Having had enough of this beer, I went back to the bar, realised it had been turned around, told them I'd wondered if it was dodgy, and got exchange for free (well, half as I'd stupidly drank half), a much better ale from Neptune.  So at least it ended up a happy experience but gosh, I'd had to work for it!

So there you have it!  Sorry it went on so long, I blame Riggy.  Three or four more pubs coming up in part two.