After the traumas of Friday night in Denby Dale, I woke groggy and sweating after a restless sleep probably involving a masked assassin slaying my GBG with a long knife (the pubs bit!) whilst filming it and sending me a YouTube link.

But I couldn't dwell on 'my loss', as an early Grand Central trip to North London was upon me.  I spent the journey down using a combination of GBG 2019, the un-intuitive GBG App, my memory, and WhatPub, to draw up a list of pubs I might visit today - call it a handmade Beer Guide ....... 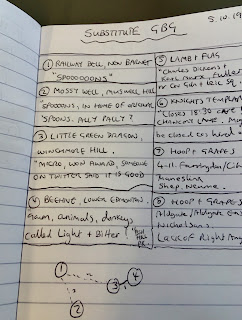 I thought it might be nice to highlight these green, but when it came to the crunch, I realised there was no substitute for an actual GBG highlighting, waaaaaaah, sob, sniffle.

Number 4 was first on my agenda, one of my most awkward North London ticks remaining, out in the 'burbs not too near a Tube or railway station.  I opted for Bush Hill Park, which wasn't too bad of a walk in truth and was there about 11am ........ 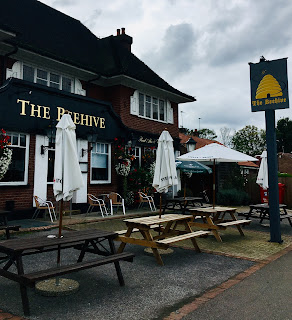 If it wasn't for the GBG description I'd recalled, Beehive, Lower Edmonton (1564 / 2780) would've been very much a 'North London by numbers' pub tick, but luckily, there'd be a twist (or should that be a 'sting'?) in the tail.  I was 'greeted' by a rather stern barman, resplendent in braces, a flat cap and 'Beehive' t-shirt, looking every inch the Londoner, training a new guy.  My man-flu seemed to have got worse again since Denby Dale, probably the mental turmoil, and this guy had such a sore red looking nose, I could feel his 'fluey' pain.   The hand pump situation was totally confusing, with the majority of pump clips turned to 90 degree angles!  Can a beer be half on and half off?  I went for a pint of Tribute, and these pumps were 'almost' facing the front.  An emergency beermat I'd purloined in Denby was called for, and two blokes spoke intensely in a foreign language underneath a boring Twugby Union match.  At the far end, a large group of blousy prosecco ladies ordered food.  The sight of mysterious black cat perked me up a bit, after Max in Ulverston, pub cats seemed back on trend.  Reminded me of a year ago where I saw no pub cats for months, then three in three weeks (Greenwich, Harborne & Leighton Bromswold).  Does this mean I have a third around the corner?  And whilst my Tribute slid down beautifully, it'd all have been bland had it not be for the mini-farm out the back.  Glad I went to explore.  We had goats (possibly called Light & Bitter, sure the GBG said they were donkeys but 88% of CAMRA members can't tell the difference), we had pigs, floppy eared rabbits and hens.  None had seen my Beer Guide.  But at least I left the pub with something resembling a smile on my face.

I was pleased to see how close Winchmore Hill was to Lower Edmonton.  A bit too close actually, as I had to sit on a bench and wait for the pub to open. Bang on 12 noon, the owner appeared, but quickly locked pub again, must've needed to go and buy something.  Oooh, what a tease!  'Don't look too desperate Si' I told myself, it is going to be a long day, and I 'relaxed' into my bench til 5 past! 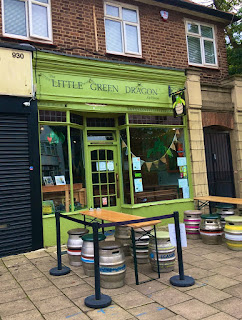 I didn't actually see him reappear, but as if by magic, like a magic dragon called Puff, Little Green Dragon, Winchmore Hill (1565 / 2781) was open and owner & perfect gent Richard was smiling up at me from behind the bar as I ordered something Salopian and gorgeous, because let's face it, you can't go wrong with a well-kept Salop ale.  This was a real 'monkey off my back' pub tick, third time lucky.  First time I'd come to Winchmore Hill was on a Monday when the pub was closed (poor planning from me) and the second time, late on a Sunday when the GBG suggested they shut 7pm though they have since extended that.   All the best micropubs are the ones which resemble old pubs, a cosy bric-a-brac creating an atmosphere even without lots of customers in.  Richard made an interesting point I'd not considered before, micropubs with less money to spend have to be more 'creative' with decor etc. than those with loadsamoney which often leads to a more sterile, polished environment.  But more importantly, back in 2015, Richard had been on his own BRAPA-esque adventure, cycling between EVERY micropub in the country, raising money for Alzheimer's - his scrapbook was fascinating to me, and proof you can take good pub Polaroids (remember my Darton disaster?)  Anyway, upshot of it is Richard returned home to open his own micropub, and could take all the best bits of those he'd visited presumably.   The other customer, Nick, was a first time visitor and had all the hallmarks of a pub-ticker, but didn't admit to it when I asked him!  I got told 'Anchored in Worthing' was the best micropub out there, and there was much love for York's Blue Bell too which doesn't count of course.  Anyway, was a great little session, easily pub of the day, almost forgot how desperate I was for a wee, and again, I headed out with a smile on my face.

I headed into Winchmore Hill station, where I took the train a couple of stops up to New Barnet, not to be confused with High Barnet where'd I'd been just a few weeks ago.

It is hard to go pub-ticking in North London and not hit at least one 'Spoons, so no real surprise my next pub was one, but was more of a surprise, it looked like an 'old pub' (probably because it was, I dunno, don't have a GBG to check do I?) and once inside, sort of felt like one too! 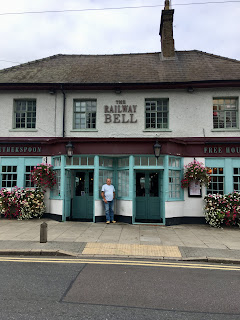 Yes, I was quite a fan of the Railway Bell, New Barnet (1566 / 2782) even if I immediately got glared at by a barman as I entered the building.  What's wrong dude?  Never seen a guy in checked black & white trousers, a 'Round the Twist' t-shirt, and an owl pendant round his neck?  I ordered a pint of Peaky Blinder pale, which was too hoppy for me, slashing at my throat like a flat cap with a razorblade concealed within!  The back of the pub was a rather drab airy conservatory, and was full of moody old Mums and prosecco twilds so I stayed in the more atmospheric front bar where the more colourful codgers were to be found.  A group of blokes opposite decided to get a brandy chaser with each of their '10 minute pints of ale' and I'm not sure it was a good idea.  The ruddy faced one in beanie hat was soon careering around the pub like a jack rabbit, mumbling incomprehensible things to more timid blokes, I just managed to avoid eye contact enough.  It culminated in him telling anyone who was listening not to buy drinks off a poor Mark Lawrenson-a-like who seemed scared for his life!  Martin the Owl still hadn't been out of my bag, and he wasn't about to start here, and it was here I rang the Denby Dale pubs to see if they'd seen my GBG. 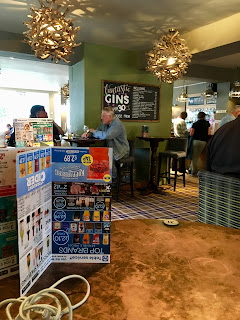 Half way through the day then, but still plenty of 'excitement' to come in the other three pubs as we headed back towards Central London.  I'll tell you about them tomorrow.  Cheers for reading,