I'd been warned by a cautious work colleague whose Dad lives in 'outer' Barrow not to do my other pub tick in the town after dark.  So like a Cumbrian game of Snakes & Ladders, I slid down the Foxfield snake back to Barrow, whilst it was still mid-afternoon.

The area in question, Hawcoat (amusingly pronounced Whore Court) is a 25-30 minute stroll (Riggy said Hawcoat was posh, who do you trust?), but mindful of long walks later in the day, and seeing a number 1 bus waiting, I ran to catch it, dropping change in the process which agonisingly rolled off the bus into a gutter!  I turned around, expecting the passengers to be laughing, but they were actually all zombies, apart from one old dear who said "let's hope it were just a tuppence!"

Having said farewell to the old lady and her tuppence, I arrived in Hawcoat, peered around nervously, no one was following me with a blade, and the pub was on the corner.  I again nervously pushed a door, took a deep breath, shielded my face, and walked in .......


But nowt to fear at King's Arms, Hawcoat, Barrow (1557 / 2773) , a more gentle pub atmosphere you couldn't wish to encounter.  Boy, did I breathe a sigh of relief!  True, everyone was male and of a certain age, not that I notice gender, and you know I love carpetted pubs, this was one of those delicious gems where it seemed to be almost crawling up the walls.  Signs reminded folk that the coat hooks had moved, neighbours complaining against smokers so to exercise vigilance, and barber shop discounts, everything was a reminder of how straightfowardly old fashioned pubs can be.  A bloke told an unwise tale of his wife straddling his mates Kawasaki which of course led to much mirth, before some local TWAMRAS arrived, I could spot them a mile off, and they spied my GBG alarmingly quickly and soon, the suited dicky-bowed distinguished Brummie (there's two words you don't often see together) was giving me the gen on local pubs.  Most memorable aspect was the groups incredulity at my next pub, the Black Dog, being included in the GBG again.  "Landlord is an arsehole, rubbish pub, don't bother!" they declared.  I gently suggested maybe they keep a good pint, but it was no good.  I persevered, insisting that if it is in my book, I'm going to visit come what may!  "It probably won't even be open, he does what he likes" they chime.   Now I could hardly wait.  Martin the Owl drank all the beer this holiday, not me, and he wants me to tell you all the Langdale by Cumbrian Legendary (a new brewery to 'tick off' my mini Cumbrian brewery section) was pint of the day! 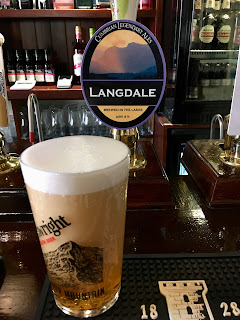 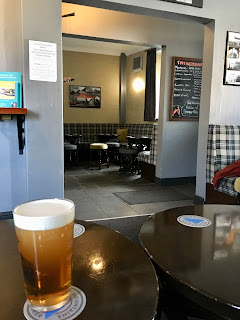 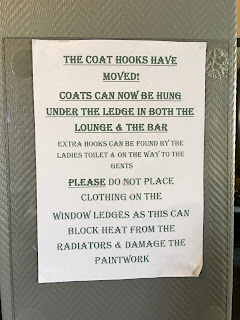 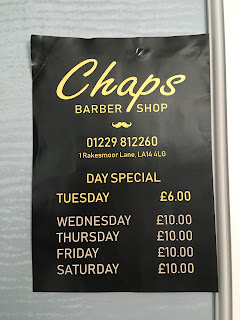 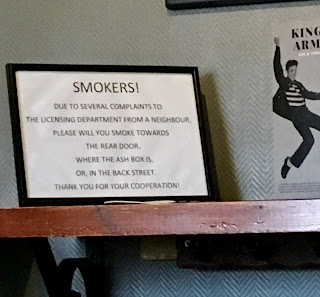 Too much chatter meant I had to jog to catch the bus which took me north of Hawcoat to Dalton-in-Furness.  There is no rail or bus symbol for my next pub (always the most satisfying ones to get done), but the GBG helpfully tells you it is a half an hour walk from Dalton's Tudor Square stop.

Never have I been more pleased to see superbly placed public loos at the start of the walk ......

The walk was very uphill, the wind was whipping up, and it became very rural, very quickly as I powered on, the words of the CAMRA gang actually making me more excited about the prospect of this pub visit.  GBG said it opened at 3pm, it was gone 4pm now so it should really be open - even this slight worry just added to the anticipation though.

And just behind the sign, the pub appeared.  And after a brief moment of panic, I saw a light and a door slightly ajar.  Phew. 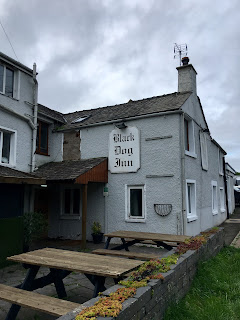 I entered the Black Dog Inn, Holmes Green (1557/ 2774) with the same air of trepidation as the King's Arms, but I found a quite raucous atmosphere, the majority huddled around the bar (i.e. bar blockers) laughing like kookaburras on a hot tin dunny.  Or whatever they say in Australia.  Luckily, I entered from the left so was unimpeded and was greeted by a guy who looked every bit a landlord, smiled, and displayed no arseholic tendencies at all.  Almost disappointed, I turned to see a huge lemon cake.  "Please take a piece, as you can see there's plenty of it!" says a young lady, balancing a child (not twild) precariously on the bar, and using the longest sharpest knife I've ever used in a confined space, I slice off a wedge and wrap it in some blue tissue, half amazed I haven't caused a bloodbath at the bar.  Then, to capture this heart warming start to life in the Black Dog,  I pluck up courage to ASK for a photo with her and child, Richard Coldwell would be proud!  I retreat to the back of the room, where I can breathe and admire the farmhouse traditional gloriousness of the place.  Despite what I said about pub carpets, one flooring type does compete for me, and that is quarry tiled.  Very atmospheric, and acoustically, it amplified the insane laughter of the happy folk throughout.  We (I mean Martin the Owl) enjoyed a Loweswater Gold, also from Cumbrian Legendary, and unlike in King's Arms, he appeared from the bag for a quick fly around.  Very nice pub this, proof you should always visit a pub yourself and not believe the opinions of others! 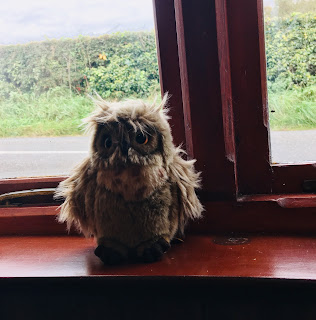 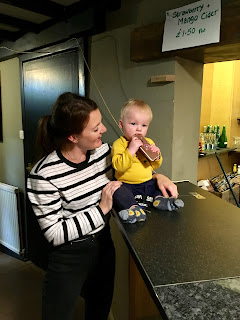 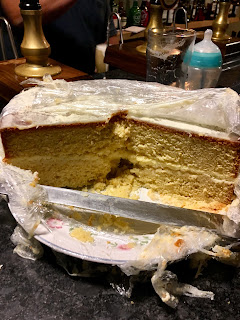 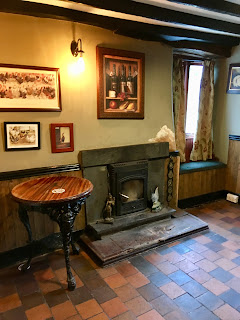 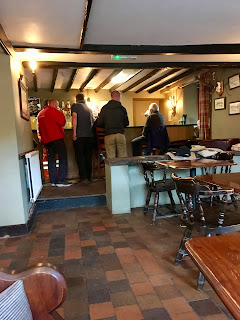 At this point, I want to say a big thanks here to Mark Bravery from Twitter.  He'd been up here last year and pointed out that I could walk from this pub to Loppergarth (where I had a MUST visit pub) and then on to Ulverston, something I'd never have thought of myself.  After all, this was a rare BRAPA day where I didn't have a defined pub plan in all the mayhem of the previous evenings watery chaos.

I marched the 2.5 miles and got there just about 18:10.  I reckon I could've taken a short cut over a field or two but stuck to the quiet roads, hardly seeing any cars.  In fact, it reminded me a lot of my walk from Luxulyan to Lanlivery in June, but then I reflected not many people I know will have done both!

Loppergarth is a 6pm opener anyway, even on a Saturday, in a very pretty village which'd be a great place to live if it wasn't BRAPA suicide and self-driving cars were a thing....... 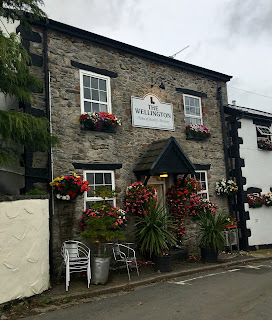 I walked into the Wellington, Loppergarth (1558 / 2775) where four or five blokes briefly looked around curiously, mistook me for a lost hiker, and carried on drinking.  I just had this image of them queuing outside from 12 noon waiting for 6pm opening.  "I'll have an arse like a Japanese flag in the morning!" roared one, winking at me, which may have related to the locals obsession with getting barbecue ribs from a local takeaway, a conversation which lasted a good five minutes.  No idea how local this takeaway is, Ulverston I assume.  But that conversation was nothing compared to when a young lady innocently asked a big blue man if he'd been delayed, flying back from holiday with Thomas Cook!  Oh dear, well, the full trauma was relived, minus the tears, including a diversion at Birmingham, and the lack of airport at Loppergarth leading to a long drive home.  I sat partially hidden around a corner, Martin the Owl only briefly appearing to sample the home-brewed Healey's Golden, which he diplomatically reviewed as 'perfectly quaffable' though signs suggested this may be more of a cider drinkers pub.  A couple opposite looked moodily at me every time I went to the loo, which was quite often by now, but all in all, a very nice pub but I had a bus to catch. 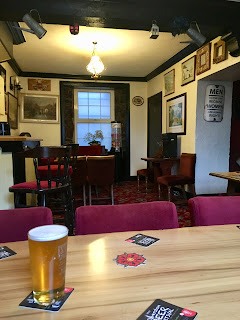 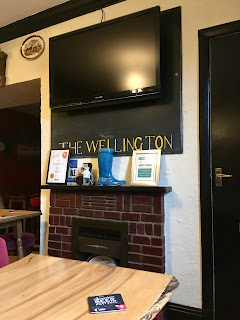 So yes, although Mark Bravery had told me I could walk on to Ulverston from here, I'm not called Si Bravery so took a bus, which was 18 minutes walk around Pennington and back down to the main road.  I stuck my hand out in good time, it was drizzling by now like a good lemon cake, but the bus still had to break quite suddenly and I had to jog along the hard shoulder to catch it up.  Phew.  So why did I feel the need to apologise?  Cos I'm a British idiot, that's why.

I had three pubs left to do in Ulverston, one tonight, two tomorrow, so still thinking strategically all this beer later, I went to the one which opens latest on a Sunday, meaning I could get out of Ulv earlier and get an extra tick in elsewhere  .... always thinking, always drinking!

Here it was, shining like a mini micro beacon - my first (and only) non traditional pub of the mini-holiday, which says a lot about Cumbria (and how little of it I've visited up to now). 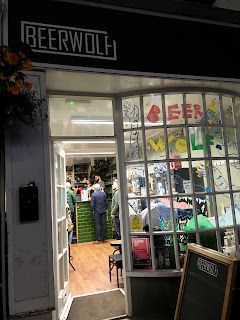 
Not to be confused with Falmouth's superior Beerwolf Books, the Beerwolf, Ulverston (1559 / 2776) still had a semblance of atmosphere, some good folk, and one of those nice green tiled little bars, and I'm a sucker for green pub decor as it is the best colour in the world.  'Arty' arrangements of craft cans sat in the window, and the staff were of the "do you want a taster?  are you sure you want a PINT?" variety.  A group of boisterous young lads on a night out had blocked the roomy upstairs, and with all their "waheys" and "chug chug chuggin'" it felt like they'd gone through the wrong door and should be in the luminous party atmosphere of the Sun Inn opposite (I'd be there tomorrow).  I took the window seat for about eight whilst others seemed happy to just stand and perch on the wall, this became something of a 'social experiment' on my part to see how long I could remain here undisturbed on quite a lively Saturday night. Amazingly, I'd almost finished my pint when a lady finally said "urghhh!  Is that thing real?"  Poor Martin the Owl hadn't heard anything like it but pleased he looks realistic obviously!  I told her I was leaving soon and just off for a piss, but when I returned, she'd already brought my rucksack and coat around for me, even folding coat over bag!  Bit rude.  But had a five minute BRAPA chat with their group, and they seemed okay, though I had my full beer allocation now so details are sketchy!


Back in Barrow, awkward moment as I realised I'd not bought a train ticket but I didn't get in trouble, though the ticket lady randomly says "there was a party at the Sun Inn in Ulverston tonight!" like she wanted to add her BRAPA two penneth (not to be confused with old lady tuppence incident earlier).

Straight back to my Travelodge for lots of scran, water and that crumbling slice of lemon cake, as I was determined to get THREE ticks in before returning home tomorrow.   Join me for part three tomorrow or Sunday!