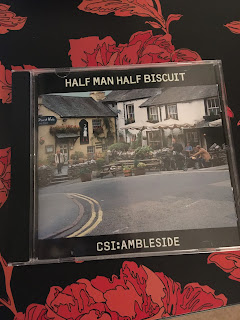 Halfway through my first day then and all pretty positive so far.  Greenodd had been great, accidental bus to Windermere where I'd very much enjoyed Crafty Baa, and then onto the Badger Bar in Rydal at the Glen Rothay Hotel, which despite a few reservations (excuse the pun, ho ho ho), had seen true quality shine through once the tourists had departed.

Next, I took a bus to one of those Lake District hotspots every man and beast has heard of, Grasmere.  I feel it'd work better with a second 's', grassmere looks so much nicer and greener.  It was crawling with visitors, and pedestrians seemed to take priority over vehicles on the narrow pavementless roads. 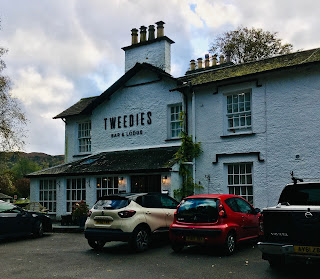 A long walk around the back, through the extensive beer garden with mountainous backdrop took me to the bar door of Tweedies (1576 / 2793) , arriving just at the right time to hold the door for a posh Southern middle ager who was carrying three pints.  "WELL PLAYED!" he guffawed through a Surrey jawline and I almost hated the place already!  Joking aside, sort of, this was much more of a vast beer bar than the Badger, and give me cosy quaint hotel and fewer bright shiny ales any day.  But I do love a good Hawkshead brew, and they had plenty.  I couldn't quite get comfortable sat against the wall, a place with tinny, screechy acoustics that even the York Tap on a Saturday night may find 'a bit too much'.  And when I surrender on my attempts to spy on the guy next to me, who was writing meticulous passages in a bound leather notebook (poet or beer ticker?) , I realised I was bored witless and spent my final 13/5 minutes in the vast garden.  Fresh air, nice views, and you could swing a cat, or perhaps more likely a sheep as I sat at one of the furthest tables.  Having personal space in Lakes pubs feels like a privilege you have to grasp on the rare occasions it occurs.  I reflected briefly on how Brunning & Price the pub exterior was, if not so much inside.

For my final two ticks of the day, I took the bus back to Ambleside, in many ways, the 'key' place of this holiday being alphabetically, the next in line.

I walked around in a circle for a while, bought a ridiculously priced pork & 'cider' (apple?) cornish pasty from something local (oh Greggs, oh Pound Bakery, sorry I have forsaken you, please forgive me!) and with the rain starting to spit again, I was glad to see one of the pubs without need for my map. 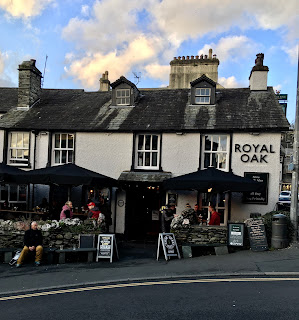 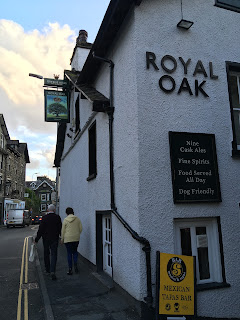 Sadly for me, it felt like half of Ambleside had taken refuge in Royal Oak (1577 / 2794) and if Tweedies had been a slight downturn on the previous three pubs today, then this one left me seriously underwhelmed.  Need for my emergency beermat for the first time this week told its own story, this was for the most part a tourist diners pub and though it had some degree of atmosphere and hubbub, had a chainy feel about it.  I read now it is a Greene King Local Hero, which feels right, though I was unaware of it at the time, having to highlight the GBG on my knee on a tiny table in a gap between bar and back room, which of course meant I didn't get a seconds peace!  In my eyeline, a fat family ordered nachos which reminded me my pasty was annoyingly cooling down in my bag - the way they sucked up the guacamole, salsa and sour cream in a sort of globule strand in order to reach the nachos was one of the most upsetting things my eyes saw all week.   In fact, my highlight was probably as I left, able to offer my table to a father & son combo who were definitely Boyzone to my Cat Stevens in their heartfelt thanks.  If that makes sense.


Next, I did something that felt very almost like I was bringing pretty Ambleside into disrepute.  Sheltering under an awning as there was little in the way of sunshine, shovelling a lukewarm pasty into my mouth, scanning a strange book selection.  This was my favourite ......


I said a cheery hello to lots of passers by who seemed quite taken with the scene!  I think the beer was kicking in.  I set off up a slight hill partially off the beaten track, which was already promising, for my sixth and final pub of the day....... 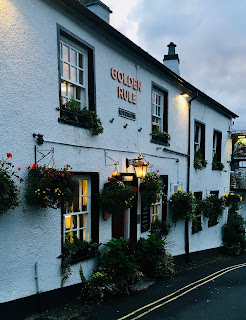 The 'Robinsons' sign was the first thing that stood out and surprised me at the Golden Rule (1578 / 2795).  True, I saw a very intriguing one in Ulverston a fortnight back, but fair to say I'm still quite surprised when I see ones outside Stockport (or the Black Horse in Preston) but I'm sure tonnes exist.  True also, I'd let my guard down a bit.  In a slightly drunken, tired state, following a couple of pubs I'd not really enjoyed, I wasn't expecting a comfortable, homely, multi-roomed, 70's decorated pub like this, and within seconds, I perked up!  A few old boys muttered a bit of unintelligible but probably friendly Amble-speak as I squashed in to get a pint of something with 'Hop' in the title and some bearded bloke on the clip, served by a bald bloke with a sense of humour.  And very good it was too (the beer, and the bald head).  Getting a seat was an issue, but I was determined to make the most of this experience and a la my Boar's Head Stockport experience, I used the mantelpiece as a makeshift table, and sat between two chairs admiring the retro board games.  For a while, I was so at peace,  I didn't care about bus times and the like, "what is time anyway?" I wondered, but then reality told me to stop being a drunk weirdo and I ran back to find a bus to Kendal, via Windermere. 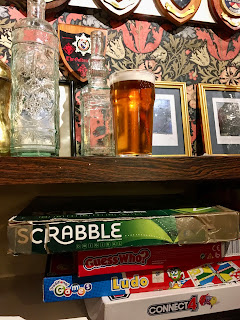 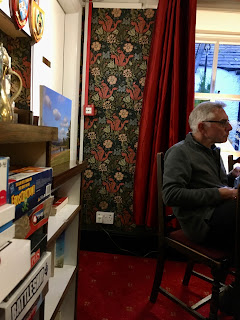 So there we go.  First full day complete and I'd be back on the 'Lakes' trail on the Sunday, in what'd turn out to be my drunkest day of the hols so stay tuned for that one on Thursday cos I'm doing actual pubs tomorrow.