It was a classic case of 'careful what you wish for' on Friday night, as I set out for Denby Dale, the next alphabetically 'tick' I needed in West Yorkshire.  Skip the boring pub bits straight for the after-match craziness if you like ......

A quick change at Huddersfield had me on a bumpy Northern, stopping at all those places no one ever asked to exist, like Berry Brow, Brockholes and Shepley.

A girl had just learned the art of 'telling jokes', and fired them out at a rate Tim Vine would be proud of, followed by hysterical laughter after each one.  They all took on a similar form ..... 'What did the <insert animal or inanimate object> say to the <insert animal or inanimate object>?'  Favourites included 'What did the chimney say to the person?'  'What you smokin' at?' and 'What did the raindrop say to the cow?' 'Hey cow!  I'm dripping down this window but you are just a cow'.  Izzard would've been proud of that last one.

It made for an excruciating journey, and her Dad, who looked like he might be trying out for the new singer of Eddie & the Hot Rods, but failing badly, made no attempt to quell her.


The walk from station to pub was a good mile or so, through the village centre and out into the sticks, only a slightly perilous pavementless three minutes caused any real concern.  It all added to the anticipation of the forthcoming tick, and with a recent pub of the year award and news that it came about because some local families clubbed together to stop their local being converted to housing, I was expecting great things! 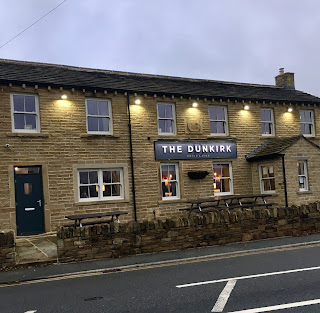 And perhaps that is how the Dunkirk, Denby Dale (1563 / 2780) was given its name, you know that 'in the trenches' 'backs to the wall' Dunkirk spirit!  (Though I admit, not sure how you can have your back to a wall in a trench).  Problem is, the scene that greeted me was that awkward formula of masses of people here to enjoy a 'Thank Fook It Is Friday' drink in a pub which must be about 40% reserved dining restaurant.  Result - bar blockers everywhere, not their fault, and everyone squashed into the right hand section of the pub whilst the left remained entirely empty (for now).   Unable to see the ales on (plus my inability to EVER see a blackboard even if right next to my face), I ask about ales and am given a 4.8%er with weird name and weird flavour.  Well kept, just not to my taste.  Shame Martin the Owl wasn't here to drink it for me.   I decided to set a trend by being the first person to go to the empty dining area, to find a seat booked from a time later in the evening, so surely I'd not be moved.  I got a few funny looks from those huddled around the bar.  I did need the loo though, which of course was at the other end of the pub, a lady had managed to position her bum at such an angle it blocked the whole route from bar to the table behind!  Nice rural views from the window reminded me of the rural setting, as I sat at a seat reserved for Reef and their 2CV from 7:30pm.  Can anyone remember any songs other than 'Put Your Hands On'?  And no, 'It's Your Letters' doesn't count.  (If you don't get that, you probably aren't a 90's child!)  A couple sat near me, but they actually were eating.  And then, a paranoid couple found table 23, seating six, unreserved, so tentatively sat down but whenever staff milled around, they asked if they needed the seats for diners.  Come on table 23ers, show me some solidarity!


With so much time to wait for the train, I'd normally have stayed for another half/pint but wasn't really feeling the Dunkirk spirit tonight, so headed back to Denby Dale centre where I'd spied two pubs earlier.  Preemptives?  I checked Whatpub and chose the one with most ales on, reasoning CAMRA normally pick pubs with more ale selection, however wrong might be. 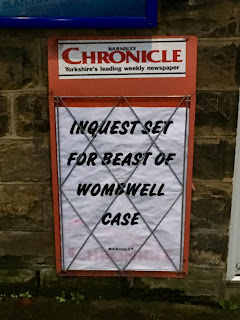 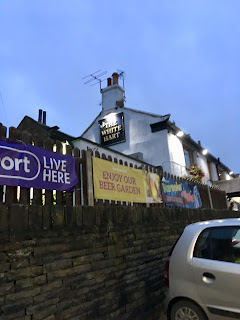 White Hart was very much more your drinkers pub, a smoking hi-vis man said 'now then' at the door and later got chatted up by a barmaid with the eyes of Henry VIII, service was brisk and efficient, ladies were dressed up - one running the length of the pub with her phone nearly colliding with me, but it seemed it wasn't an emergency but her turn to break in the pool game versus her boyfriend.  The Gents loos were marked up as 'Beware of the Wife', and though my Rudgate was fine, I thought it was a bit fizzy but am I noticing beer imperfections more when I'm aware I'm not in a GBG pub?  Possible.  A bunch of lads to my left chatted, and no one seemed to care that I was here, which was nice!  Really liked this pub, more so than the last, and it made me question what all this Good Beer Guide ticking nonsense is all about?  I'd live to regret that. 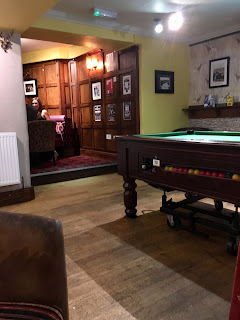 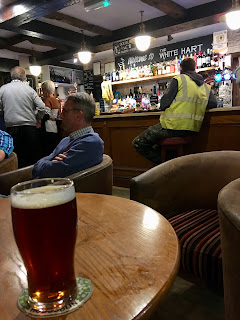 Back at the station, the hourly train back to Huddersfield was cancelled.  Nooooo!  Well, buggered if I'm going to stand on a drizzly nothing station for an hour, so to the third pub it was ...... 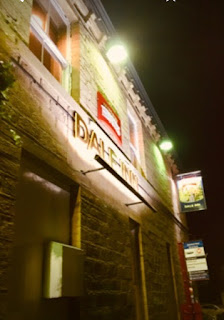 Small, cute and empty inside (a bit like me), Dale Inn was a quite modern Thwaitesies pub and having suspected it had the least GBG potential of the three, early signs weren't good.  First, a man setting up for a gig just barged past me and grunted even though I held the door whilst he brought his amp through, ignorant prick.  Then I had a long wait until a member of staff appeared to serve me.  Luckily, when he did, everything improved.  A genial silver pony tailed man pulled me a pint of Wainwright, the only ale on, and surprise surprise, favourite pint of the night.  He gave me a 'loyalty' card, and when I went to sit near the welcoming real fire on comfy bench seating, he was often over to stoke the fire and ask if I was enjoying my pint.  What a contrast from the opener, and as I sat in perfect contentment, some great tunes playing, barely another customer around me, I again contemplated the futility of GBG ticking versus a more Winfield-esque approach to pubs!  Again, I'd regret those thoughts. 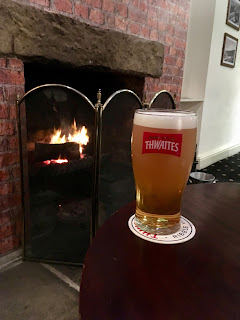 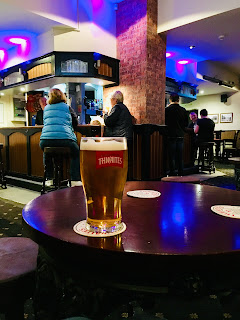 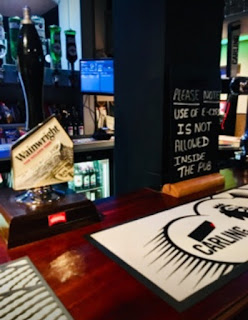 Back in York after a change at Huddersfield, I unpacked my bag to re-pack it again for tomorrow's trip to North London (it makes sense to me okay?), when I suddenly stopped dead in my tracks.  MY GOOD BEER GUIDE WASN'T IN MY BAG!

Nooooooo, 5.5 years (exactly, less one day) and this was a first.  As you'll know from trips like Burton, Newark and St Neots, I've been in some crazy drunken states but always get back safely with the GBG, almost like putting it back in the bag is a muscle memory.

Last time I'd seen it unfortunately, was in the Dunkirk, having highlighted at my Reef 2CV table.  I even remember consciously thinking in the White Hart (and I think the Dale Inn) that I didn't need to get it out of my bag because I didn't need to tick anything off!

But when I rang the Dunkirk, they'd seen no sign of it.  But they took my number in case it turned up which was nice of them.  I then rang White Hart who'd not seen it either, and the Dale Inn phone just rings out no matter how many times I try it.

So if you are in Denby Dale, keep your eyes peeled.  If you ask and return it, I promise I will get you a Tom Irvin signed photo. Martin's suggestion (not the owl).

Likelihood is though, I took it out on train (or Dale) to check something that just occurred to me, and never put it back again.

I know what you are thinking.  What if someone nicked it?  But is that really logical?  Despite being six weeks old only, it is a sorry mess of a book.  What with the botched brewery extraction, the Isle of Man has become a crudely laminated back page, it is full of toxic green ink, and my bag contained hat, scarf, gloves, lots of food for my London trip.  Plus a crime novel I'm reading set in the Cotswolds which is in much better condition and more exciting.

Besides, in Dunkirk, no one was near me and I had my toilet visit BEFORE that last ever green highlighting experience!

White Hart was the only pub with people around me, I left my bag unattended when I peed, as I always do unless I'm in Wrexham, and the pool players and group of blokes didn't seem remotely interested in my presence.

Dale Inn had no one anywhere near me.  Nearest were a couple at the bar.  They looked honest.  I suppose it could've happened on the train, few shady characters on the Hudd-York leg and it took me a while to find the loo, hmmm.  My own fault really.

Or was it someone with a BRAPA grudge?  I know I *hardly ever* upset anyone, but what if a low-key enemy decided to teach me a lesson?  I make it clear I'm doing West Yorkshire on Friday evenings, and they'll know I follow an alphabetical pattern, so they'd only need to look at recent trips and previous GBG's to work out what my next likely 'tick' will be.

And then it happens, I walk into the Dunkirk in the early evening, like a fly into a spider's web, and he/she clocks me, due to all my stupid blog photos, I of course don't know them by sight.  But I then make it difficult for them by sitting in a deserted dining area.  So they have to play the waiting game.

They see me leave, walking briskly away (I never look back, angry mobs and all that) and keeping a safe distance, track me to the White Hart, they'd not been expecting this, a preemptive, and wonder why I'm stalling across the road photographing Barnsley Chronicle news boards and checking my phone (Whatpub).

White Hart is a much easier environment to secrete yourself in, and they hover towards the far left of the bar, wait til I go for a wee, and swoop.  Take that BRAPA for your upsetting reviews!  Next time, it'll be Martin the Owl, headless, in a ditch near Ely, you mark my words.  And then what?  Murder me on Kendal station and stick some mint cake in my mouth?

So today, giving up any hope of getting it back but with still no ransom letter or cryptic threat on social media, I went to  L**ds Waterstones just like the good ole' days and bought a new copy.  Luckily, vouchers from work meant I got it for £5.99 ........


I'm in no hurry to extract the brewery section (ain't it heavy with it though?!) or re-green everything, too close to my Autumn holiday, but I'll do it in stages.  Incredible end to what I believed would be an easy uneventful, one pub, two pint evening!